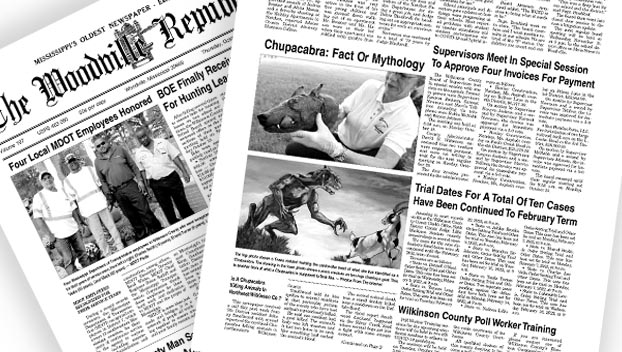 A small-town Mississippi newspaper recently received reports from local residents about a mysterious creature killing animals in the countryside. Below is the account as published in the Oct. 21, 2021 edition of the Woodville Republican in Wilkinson County.

Is A Chupacabra Killing Animals In Northeast Wilkinson Co.?

This newspaper received a call this past week from 5th District resident Johnny Smallwood with several reports of the mythical Chupacabra killing animals in northeastern Wilkinson County.

Smallwood said he has spoken to several residents in that particular portion of the county who have had animals mysteriously killed.

He said one resident had a goat killed. The animal’s body was left uneaten and it had two holes in its neck like something had sucked the animal’s blood.

The second animal death was a small donkey killed near a residence on the Buffalo Road.

The third report Smallwood reported happened on the Silver Creek Road where several dogs got into a fight with some strange animal.

“They fought something that got under the owner’s car and tore up the underside of the vehicle,” said Smallwood.

And, finally, he said that several years ago an area resident had several small colts killed. He said the owner reported that their blood had been sucked from the young horses.

“They told me the animal that killed the colts was heavy shouldered,” said Smallwood.

What is a Chupacabra?

Chupacabra, in Latin American popular legend, is a monstrous creature that attacks animals and consumes their blood.

The name is derived from the Spanish words chupar (“to suck”) and cabra (“goat”) and can be translated as “goat-sucker.” As a fearsome, but probably nonexistent creature, the chupacabra has been characterized as the southern equivalent of the Sasquatch.

The chupacabra only recently joined the vampire in the bestiary of bloodsucking creatures. Chupacabras were first reported in 1995, in Puerto Rico, where they were blamed for attacks on goats, sheep and other domestic animals, supposedly leaving uneaten carcasses that were drained of blood. Early reports described a creature that stood upright and resembled a large reptilian kangaroo with huge red eyes. No actual specimens were found, and skeptics suggested that “witnesses” may have been influenced by the Hollywood science-fiction horror film, Species (1995), which features a monster of similar appearance. But, other sightings were reported throughout the Americas and as far north as the United States.

A different type of chupacabra was also reported in many of the same places. These chupacabras were smaller and stood upon four feet. They were generally canine in appearance but hairless. Actual specimens were produced, but they were identified by biologists as coyotes, dogs or canine hybrids. The animals owed their strange appearance to hair loss resulting from mange, an infestation of the mite Sarcoptes scabiei. It was suggested that the canines attacked livestock because the debilitating effects of the infestation put wild prey out of their reach.

The chupacabra soon found its way into popular culture. Both types of the creatures served as monsters in low-budget motion pictures …

… Whether the chupacabra exists in Wilkinson County is still up in the air. This newspaper investigated similar creature reports in the Donegal area of this county, but never uncovered any firm evidence that the creature actually existed or whether is was a canine with a severe case of mange.

Who knows what the facts and truth really are?

Be warned, for those of you who believe chupacabras are real, you might need to watch out for them on Halloween Night!

Story reprinted with permission from The Woodville Republican.