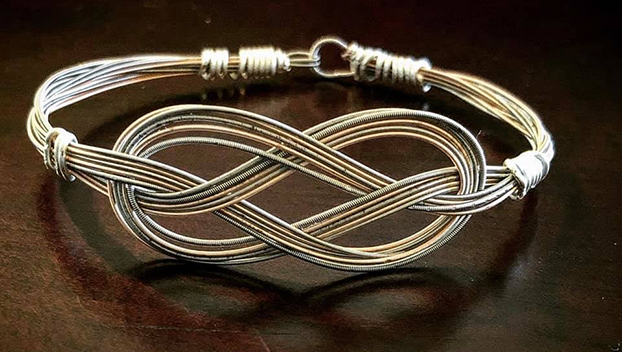 Seven years ago, Nanney attended a Jerrod Niemann concert in Birmingham. When the musician broke a guitar string on stage, he handed it to her.

“I wrapped it around my wrist and thought ‘This would be cute to turn into a piece of jewelry,’” she said.

Turning that guitar string into a bracelet sparked Nanney’s creative energy, and from there the ideas started flowing. That was the beginning of String Thing Designs.

“I think that music is an art,” Nanney said. “And the art isn’t finished when the song is over.”

Nanney, 33, lives in the Pratts community of Baldwyn and works as a secretary for an insurance office in Tupelo — a role she’s held for 15 years.

As a jewelry maker, Nanney’s self-taught. She learned to craft her guitar string finery through trial and error.

Nanney started out selling pieces on Facebook, which led to her creating a page for String Thing Designs. The social media site has allowed Nanney to reach customers she’d never see at the markets and festivals she frequents to sell her wares. It’s also given her an outlet to create jewelry for individuals and other artists.

“I had a lady from Zac Brown Band’s fan club contact me a few years ago to create guitar pick jewelry for the fan club,” Nanney said.

Along with Facebook, Nanney sells her products on Etsy, at in-person festivals and markets and at various local businesses in Mississippi, including Relics Antique Marketplace in Tupelo, Paper Moon Clothing in Baldwyn, Wild Flowers in Belmont, Old Corner Market in Tishomingo and Pacesetter Gallery in Flowood.

With 15 to 25 markets all scheduled in a few months’ time, fall is Nanney’s busiest time of year for sales.

While it may not seem like much, turning guitar strings into jewelry can mean the world to some people.

“Turning it into jewelry means a lot to someone if they have someone that plays in their family,” Nanney said. “I’ve got friends and family that will bring me their strings from someone that has passed away, and they want to turn it into something that would be more meaningful than just (leaving them) sitting around.”

Each piece of jewelry Nanney creates is made from used strings donated by local musicians — most from the Tupelo area; some from as far away as Nashville. Many of her handcrafted pieces include tags with the name of the artists who played them.

Nanney and her family have always enjoyed listening to live music, and they’ve become friends with many artists through her business, so “it means a lot to get out and support them and help get their music out,” she said.

“When I’m able to put the (artist) name on the bracelet, they may not have heard of that band,” Nanney said of her customers. “Then they’ll buy the bracelet, look it up, and they may become fans of that artist too.”

And she gives back to the artists by creating a piece for them, a family member or significant other from the strings they donate.

Simple guitar string bracelets are popular among men who want something original, but not too flashy. Women tend to favor bracelets featuring guitar picks, including Elvis-themed guitar picks.

Nanney began incorporating guitar picks into her designs several years ago, and has also created pieces with guitar people have caught or picked up at concerts. Along with bracelets, she also makes earrings and necklaces from guitar strings.

Her best seller is the “infinity bracelet,” which is two guitar strings of different colors tied into an infinity symbol.

Nanney is a mother, so she can’t devote all of her spare time to the business, but she does set aside one or two nights each week to work on jewelry.

“I would love to expand more,” Nanney said. “I think it’s a great opportunity for artists, if they would like to donate their strings. It kind of helps get their name out as well in the area.”