Kangaroo decides it’s time to make his escape, then hops around Mississippi town 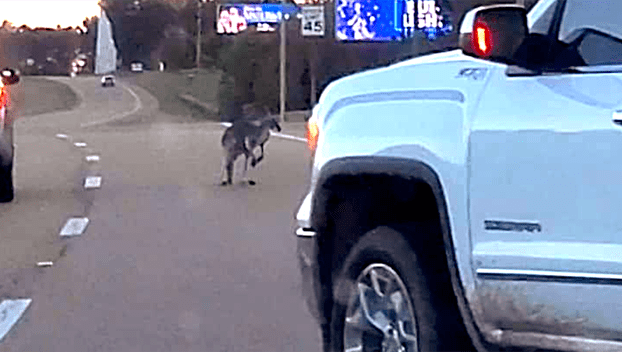 Rocky the kangaroo has been returned to his Mississippi home after a romp around Madison.

The 2-year-old — who assists children during therapy sessions — made his escape Tuesday afternoon, WLBT-TV reported.

What?! Someone spotted a kangaroo hopping along I-55 in Madison! 🦘🦘🦘 (📷: Micky Vesa) pic.twitter.com/IYLTMBapG6

His owner, child psychologist Alyssa Killebrew, says a neighborhood child wanted to visit Rocky in his backyard cage but forgot to secure the enclosure.

Killebrew, who is 7 months pregnant, said she and her nanny hopped into action and took off to search for the kangaroo.

Killebrew eventually spotted Rocky along Interstate 55 in Madison, where cars had stopped and motorists were taking pictures and videos.

The animal was taken back home, and the plan was for Killebrew’s husband to take Rocky to the couple’s farm in Flora, the TV station reported.