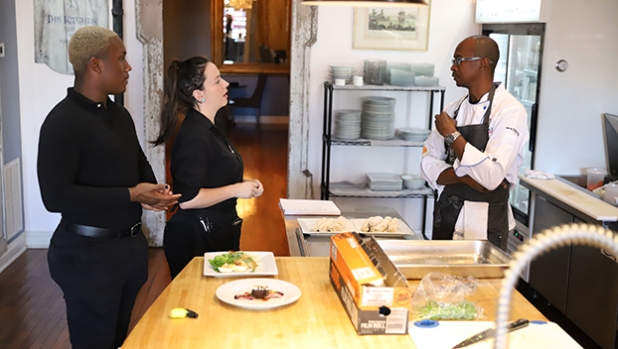 Delicious things were happening at The Kitchen on Main Street Tuesday.

About a dozen of Natchez’s restaurant and hospitality industry stakeholders were fed with a three-course gourmet meal.

It started light with a romaine salad and herb dressing with a side of deviled eggs garnished with candied bacon bits and crabmeat. This was followed by chicken roulade stuffed with spinach, bacon and zucchini served with a square of three-cheese mac and cheese and sautéed kale and carrots and smoked brisket with a coffee and brown sugar rub.

For dessert, they had spiked Cruzan coconut brownie topped with roasted nuts and mini-marshmallows with a side of vanilla bean ice cream and a combination of raspberry and strawberry sauce with a hint of jalapeño.

Each dish was so professionally plated, it was difficult to believe the chefs who prepared it were only two weeks into training at a brand-new workforce development class at Copiah Lincoln Community College in Natchez.

The pilot class started Nov. 1 with 10 students and lasts through Dec. 17, Allen said. He added if things go well, they plan to expand upon it and increase the number of students for the next course offered in January.

“Max we can have 30 to 40 students at a time with three instructors,” Allen said.

After the meal Tuesday, Allen told the dozen stakeholders who were fed that the class was like “The Karate Kid” in the sense that students do not feel like they’re learning until the lessons are applied in real life.

“It doesn’t seem like anything is happening, but it is just like ‘wax on, wax off.’ When you get into the swing of things, that is when you realize you actually learned something. That is what today was about — to see if they learned anything or not. And I think — did they?”

His answer was a round of applause.

Allen plans to give his students another shot at preparing and serving a meal just before graduation and challenge them by increasing the number they serve to about 30 people.

“Being an executive chef, I realize that not just in Natchez but globally we needed to train the next generation of hospitality workers and chefs,” Allen said. “It’s an overwhelming feeling when you realize what we have to endure in the hospitality industry, and so having a portal for students to be trained and understand what a joy it is to work in the hospitality industry, it pays off. It’s hard work and if you’re not enjoying it then it would be even more taxing.”

Allen said his involvement with Co-Lin began a year ago when he was searching for an avenue to recruit graduating cooks as employees.

“That’s when we realized the culinary program was getting closed down,” he said. “It didn’t make sense. I needed to do something to fill that niche.”

He pitched the Restaurant University idea to the school’s administration and it was well-received. The program was marketed on social media platforms with a 10-student limit. It is paid for with tuition and also by scholarships and donations from area vendors and business owners who want to see the program succeed, Allen said.

To be eligible for the class, students must be 18 years old or older and must have taken the ACT WorkKeys Assessment and scored at least BRONZE level. Students who successfully complete the class leave with ServSafe certified, which is a nationally recognized certification for serving food and alcohol that is good for five years.

They will have also learned the culinary basics needed at any restaurant they may work at in the future, “regardless of what is on the menu,” Allen said.

For more information about the program, email natchezru@yahoo.com. Prospective students can call 601-442-0243 to schedule their WorkKeys Assessment.