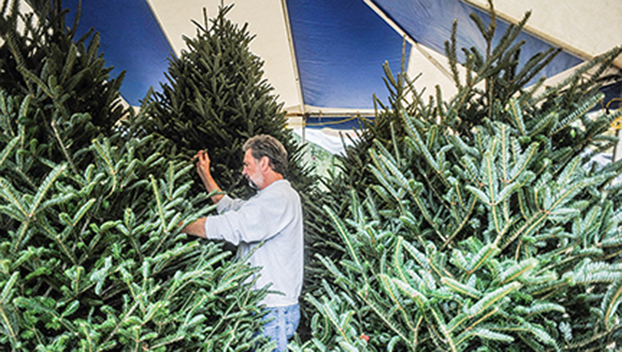 Brad Paine looks through Christmas trees for sale at the Mid-Town Shopping Center, in 2015.

Christmas tree shoppers in one Mississippi community are scrambling after a tree provider that’s been running locally for over two decades said they will be taking 2021 off.

Oxford’s “O Christmas Trees,” run by Jeffrey and Sarah Hollis during this time of year, typically sells top-quality trees in the parking lot of the Mid-Town Shopping Center located on North Lamar Boulevard, about a half-mile from the Square.

The couple met each other while attending classes at the University of Alabama, and made Sarah’s hometown of Oxford their residence after marrying.

According to Sarah, her husband was selling real estate which is typically slow through the holidays.  “His uncle was a Christmas tree distributor based in Jackson, Mississippi, so he dropped an 18-wheeler load in Oxford for Jeffrey to sell.  We had such a great response, we just kept doing it year after year,” she said.

Evidently, it’s due to a seed shortage that small farmers experienced about seven years ago, which has finally caught up with the popular tree sizes.  Particularly at Hawk Mountain Tree Farm outside Boone, North Carolina, where the Hollises have secured beautiful Fraser firs for the past 22 years.

“Jeffrey has walked the fields, been there for harvest and has a great relationship with the Garland family,” said Sarah, of the farm owners.

Although they’ve had a couple of locations, the one in the shopping center lot has been their home base for over 15 years.

In a typical year, trees arrive at the lot three days after being harvested in North Carolina.  They’re usually so fresh in fact, Sarah said, that one year snow was still on the branches when they unfurled the trees.

“We typically open the lot the Tuesday before Thanksgiving, and we are there until we sell out.  We also offer garland, wreaths and tree stands, as well as delivery services.  Last year with the pandemic, people were unusually anxious so we sold out in 12 days,” said Sarah.

After an exhaustive search, the couple turned to a popular Memphis wholesaler as a backup plan, who promised a shipment of 650 premium Fraser and Nobles.  They were dispirited to receive a phone call saying the order would be cut.  “Yesterday, he called to say we would get zero 8 to 9-foot or 9 to 10-foot trees … the highest-demand trees.  And we would have to take a mix of trees, some coming from as far as Oregon,” she said.

“So, Jeffrey got in his truck and drove to the warehouse.  After seeing the state of these trees, he made the difficult decision to forgo this Christmas season.”

In addition to catching the brunt of this past seed shortage, the Hollises and other similar vendors are contending with a general nationwide Christmas tree supply shortage, due in part to weather, lack of staff, and transportation issues.

“The wholesaler we found in Memphis has many clients.  I’m sure we were a small fish compared to other established accounts.  He had to make a decision on which customer to serve,” said Sarah.

“The families we serve have an expectation.  We’ve kept things simple and only ever offered No. 1 Fraser firs.  Those simply weren’t available to us,” she said.  “The severe decrease in quantity didn’t make sense from a breakeven standpoint, and a mix of product didn’t justify the risk in disappointing a very loyal customer base.  We’ll make it up to them next year,” added Sarah, enthusiastically.

Fortunately, the Christmas tree lot isn’t the couple’s sole source of income, so while the decision was hard, Sarah said, “it wasn’t detrimental to our family.  But we are small business owners, and understand the daily stressors of supply chain strains among other challenges.  We are so grateful for loyal staff, customers and suppliers for coming together.”

With regard to their business relationship with Hawk Mountain, Sarah said: “We fully intend to return once their supply returns to normal.”

Also, she said she knows they’re not alone in the set-backs facing many businesses and industries.  “I would encourage people to shop local and when things don’t work out like we are used to, be understanding and kind.  Since sharing the news, we’ve received nothing but supportive messages.”

Reaching for the eggs this morning? Give thanks to…