Reaching for the eggs this morning? Give thanks to this Mississippi company that created 18-egg carton four decades ago 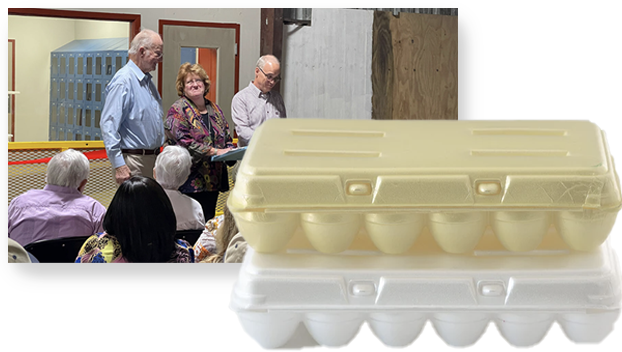 For a company with fewer than 100 employees, they reported 1,016 combined years of experience, multiple generations of the same families on the production floor at any one time, and the number of egg cartons made over five decades rests comfortably in the billions. Those figures aren’t bad for a company that started out with two men, a delivery truck and a horse trailer.

The company was founded in 1971 by Jesse Davenport and the late Ray English and is now run by the English and Davenport children. Chief among those is Debra Isaac, daughter of Davenport. For Isaac, keeping her father’s business alive is a mark of pride, an act of love and sacrifice.

“When I was a teenager, we’d come down here after church on Sundays and load trailers — what was known as free labor,” Isaac said. “Everybody in the Davenport and English families has worked here at some point. There are all kinds of fun stories.”

There are six siblings on the English side and four on the Davenport side, Isaac said, and they all grew up in and around Foam Packaging’s office.

Foam Packaging managed to withstand the “cholesterol scare” of the late 1970s and early 80s by adding Polystyrene takeout containers and lunchroom trays.

Today, Foam Packaging’s products can be found from coast to coast, as far as Iowa and Minnesota and Florida and South Carolina. While Isaac said it’s difficult for the untrained eye to identify their trays or takeout containers, consumers should look for the embossed “FPI” on the inside lid of their 18-egg cartons to see if it was made at home in Vicksburg.

One thing Isaac made clear was, Foam Packaging is a drop in the bucket compared to larger companies producing similar products, often on a much grander scale. But what the company lacks in size, it makes up for in personal service.

“We are like a little ant in relation to our competitors, who are the size of anteaters,” she said. “The reason we’ve made it 50 years is, we can crawl fast and carry 10 times our weight.”

The company is nothing without its employees, Steve English said — something he learned firsthand as a laborer when he started working with his father.

“The Lord’s blessed us at Foam Packaging and we’re doing something right,” English said. “I started out sweeping floors, loading trucks, changing molds out of machines. Anything that got my hands dirty, I did.”

Mothers have trained their sons on Foam Packaging’s machinery, spouses have met at the plant and siblings have worked alongside one another.

The longest-tenured employee, Comile Floyd, has been with Foam Packaging for 41 years. Floyd started out in an entry-level position and worked his way up to a supervisor position. The company’s first maintenance supervisor, Felton Townsend, was succeeded by his son, Corwayne Townsend, who’s now been with the company for 20 years.

Mitzi English Busby, English’s sister, affirmed the company’s lifelong commitment to its employees, starting with herself as a child.

“I would come down here from the time I was little. We grew up here,” Busby said. “Summers in high school and college, I would work here and learn different aspects of the business. It’s always been a home away from home.

“I would definitely say that, when you have an employee who gets up and wants to come to work every day, it’s worth it to make sure they’re taken care of.”

As the next generation of Davenports and Englishes continues to lead the company, Foam Packaging remains in steady hands — and remains in Vicksburg.