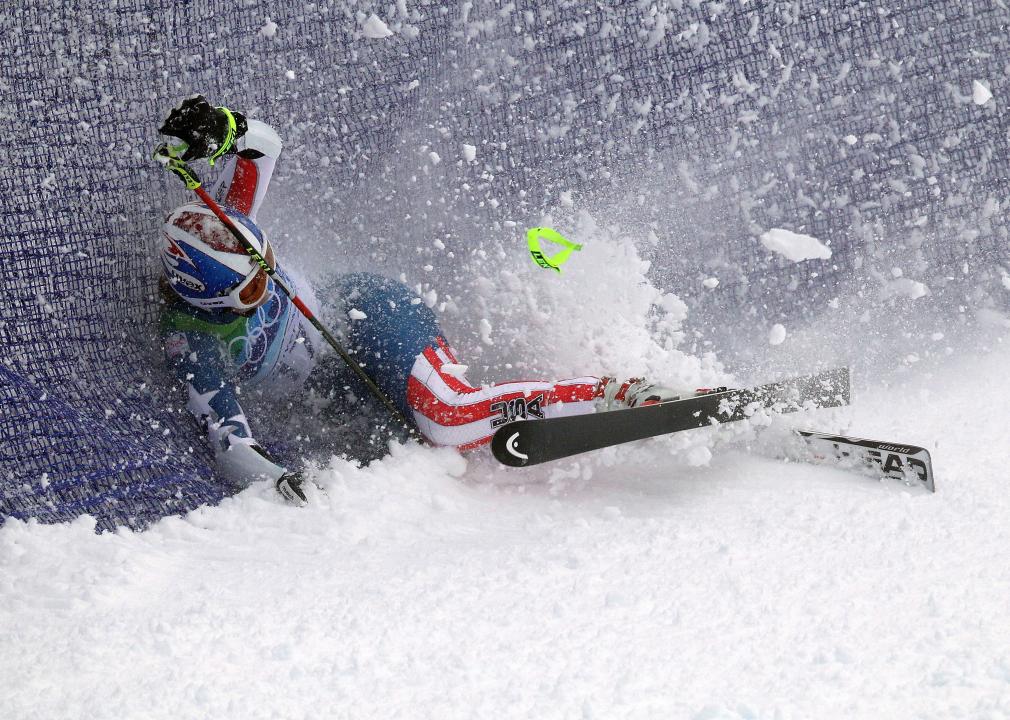 It might be a championship repeat squashed by an unfortunate Achilles tear or a career nearly ended by a “one-in-500” shoulder injury. The most heart-wrenching moments in sports often involve watching a favorite athlete go down with an injury that keeps them out of the game for a significant period. For some it might even mean an end to their careers, or at the very least their domination as players. It’s a period when they face an unknown future that takes focus and resolve to overcome.

Watching sports heroes fight back to return to their success makes for some of the best moments in sports. Think of a family cheering on a quarterback returning to the field after 17 surgeries or a skier who’s back on the top of a mountain chasing gold, days after being airlifted away from it. Hydragun compiled a list of 10 amazing comebacks from sports injuries based on news reports, athlete interviews, and video footage of games and plays. 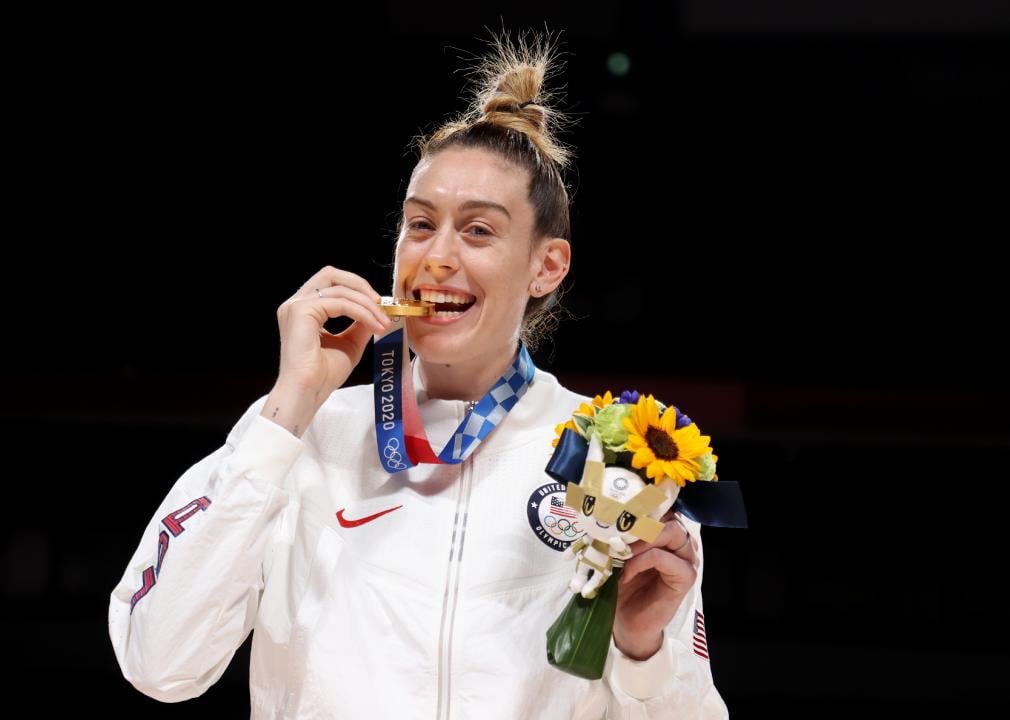 Breanna Stewart had put together one of the most decorated 12 months in the history of professional basketball when she ruptured her right Achilles in the EuroLeague championship game in April of 2019. Stewart, known colloquially as “Stewie,” said she paid more than $30,000 of her own money to rehab an injury that’s one of the most difficult to overcome for a basketball player. But it didn’t slow her down all that much.

The Seattle Storm forward picked up right where she left off with five championships (WNBA, Russian Premier League, EuroLeague, Tokyo Olympics, Commissioner’s Cup) within a 10-month span and an MVP in each. Before the injury, she had strung together titles at the FIBA Women’s Basketball World Cup (Team USA) and WNBA Finals (Storm) while being named MVP in each along with MVP league MVP and USA Basketball Female Athlete of the Year awards. 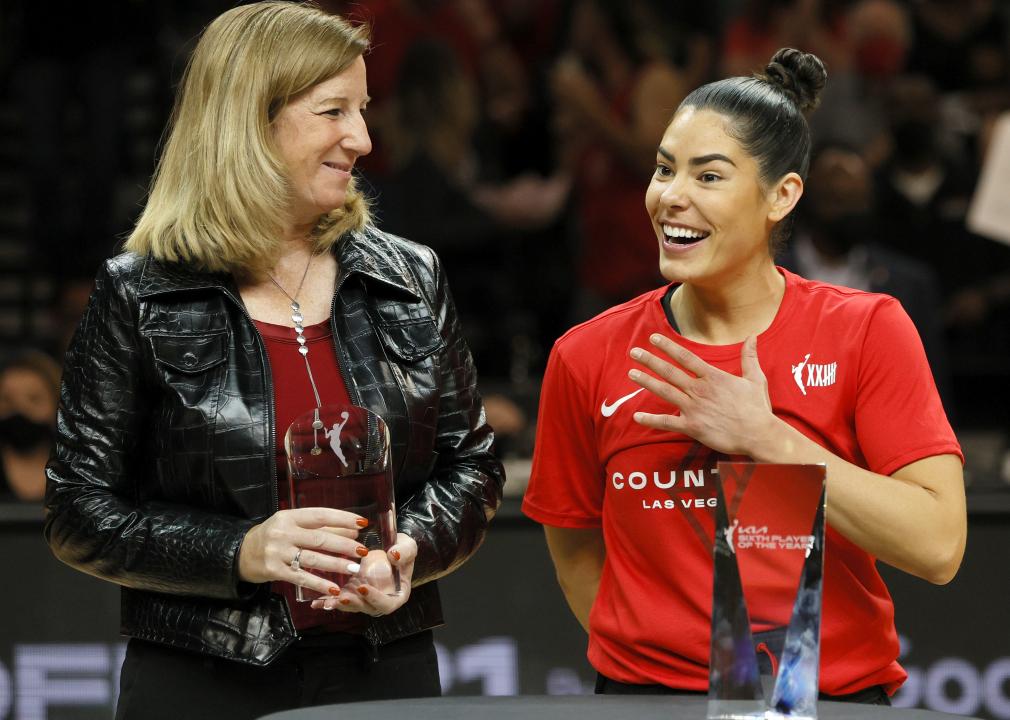 Kelsey Plum is also among the small group of Achilles-to-gold athletes. The WNBA’s Las Vegas Aces guard was primed to have a breakout year when she suffered an Achilles tendon tear during non-contact play while training in a private gym. It was one week before the WNBA announced its 2020 bubble season at the height of COVID-19.

Plum, the #1 draft pick in 2017, was the NCAA’s leading scorer and faced rehab with the same competitive tenacity. While working her way back, she told The Athletic that she learned to identify any issues with muscles, strength and positioning between her two feet.

One year after her injury, she won gold in the Olympics’ first-ever 3×3 tournament. And after missing all of 2020, she earned the WNBA’s Sixth Player of the Year award for her 2021 season. 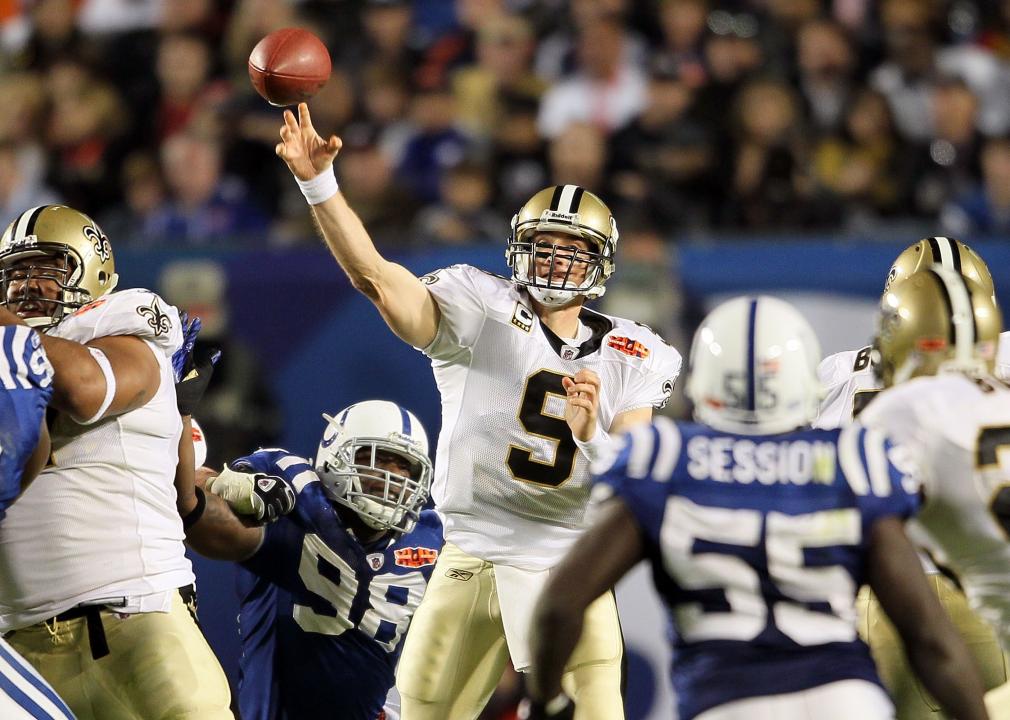 Drew Brees bet on himself after a devastating shoulder injury, and it led to a Hall of Fame career. Brees suffered a torn labrum, partially torn rotator cuff and dislocated throwing shoulder when he went for a fumble in the final game of the 2005 NFL season. It was called a “one-in-500” injury, he told the New Orleans Advocate.

He became a free agent in the offseason and while the Los Angeles Chargers offered him a deal to stay, it wasn’t fair money for a starter. As Brees leaned into rehab, beating every benchmark set for him, the Dolphins passed on him out of concern with the injury. The New Orleans Saints eventually decided to sign him. Brees went on to be named AP NFL Offensive Player of the Year in 2008 and led the Saints to the Super Bowl XLIV title, earning MVP. The 13-time Pro Bowler retired in March and ranks second all-time in NFL career passing yards and touchdowns. 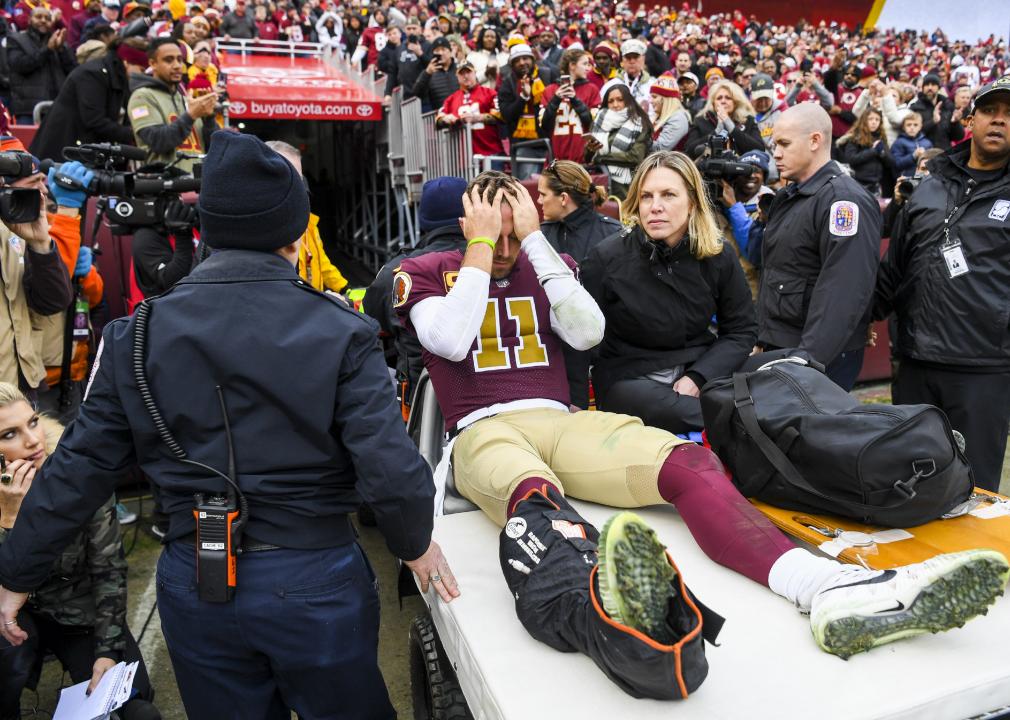 Alex Smith’s comeback was short-lived, but no less impressive following a gruesome leg injury in November 2018. The Washington Football Team’s quarterback suffered a compound fracture of the tibia and fibula on a third-down sack. The injury was immediately and obviously serious, but it wasn’t until months later that fans found out just how serious it became.

Smith underwent 17 surgeries and battled a life-threatening infection. A year later, he revealed that doctors struggled to control the sepsis in his leg and were considering amputation. After returning home, he had to wear a large external fixator around the leg and even received consultation from the military while visiting veterans, according to The Washington Post.

Nearly two full years after the injury, Smith returned to the field when Washington starter Kyle Allen was sidelined. He made his first start the next month and took the team to the playoffs. 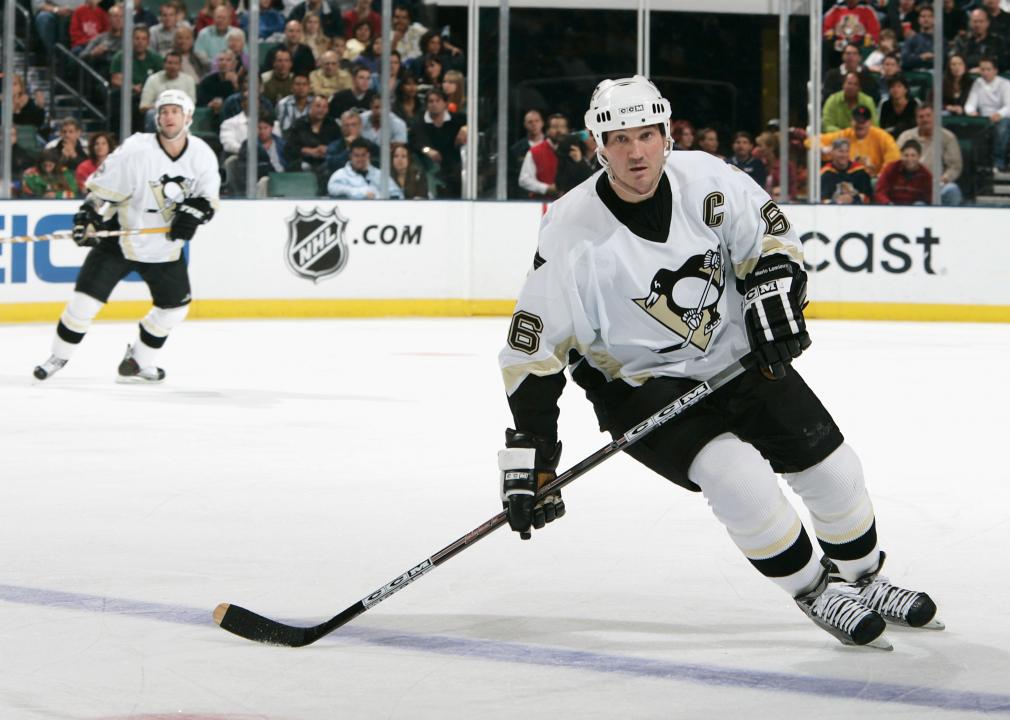 Mario Lemieux is one of the most iconic hockey players of all time, known even among casual sports fans, but most don’t know he endured a chronic illness throughout his career and his life. Lemieux, who spent all 17 years of his NHL career with the Pittsburgh Penguins, was diagnosed with Hodgkin’s disease in January 1993 when he was 27. He still led the league in points that year and after missing extensive time in 1993-94 while undergoing radiation, he would lead in scoring two more seasons before retiring in 2006.

Lemieux also endured chronic back pain during his career. He was named MVP three times, ranks second all-time in career hat tricks and second in average points (1.88) per game. He was the first player ever to have the three-year waiting period for the Hockey Hall of Fame waived, allowing him to be inducted in 1997, the season after he initially retired (though he went on to play again in 2000-06). 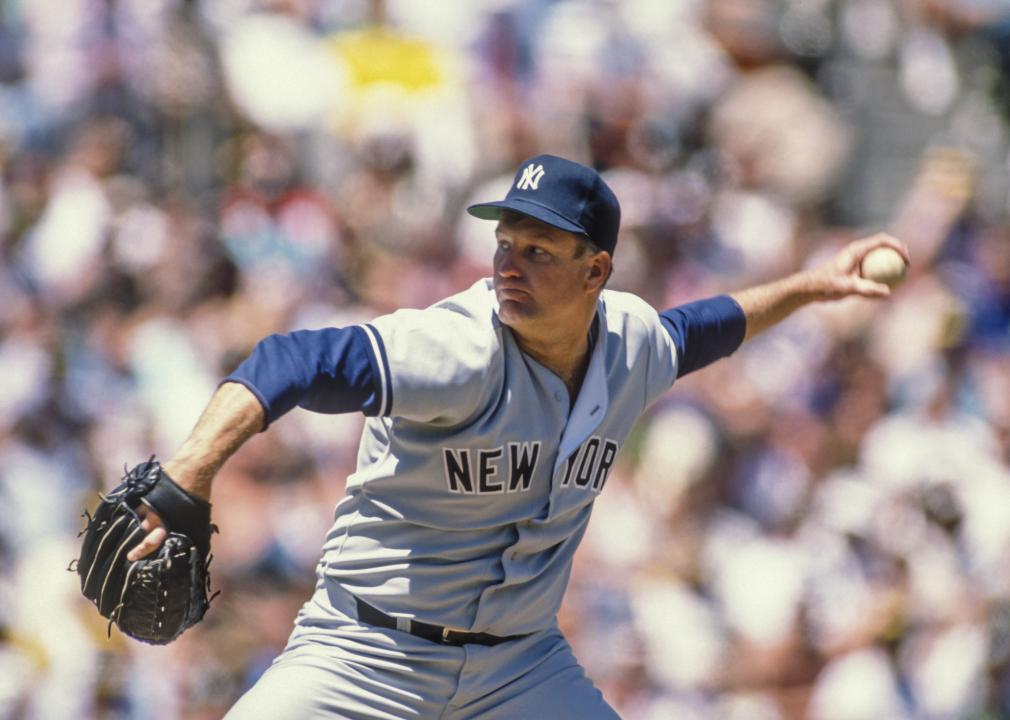 Tommy John is better known for his comeback from a sports injury rather than his career on the mound. That’s because Tommy John surgery—formally known in medicine as ulnar collateral ligament (UCL) reconstruction—is named after the MLB pitcher.

John was a dependable starter for the first 12 years of his career, but then he felt a twinge in his throwing arm during a game in 1974. Dr. Frank Jobe, the Los Angeles Dodgers team surgeon, intended to repair the UCL but found that the pitcher didn’t have any UCL left. So in a historic first, he grafted a ligament from John’s wrist to repair the elbow. John returned to finish second in NL Cy Young Award voting in 1977 and played 14 more major league seasons. It’s now common for pitchers to undergo Tommy John surgery. 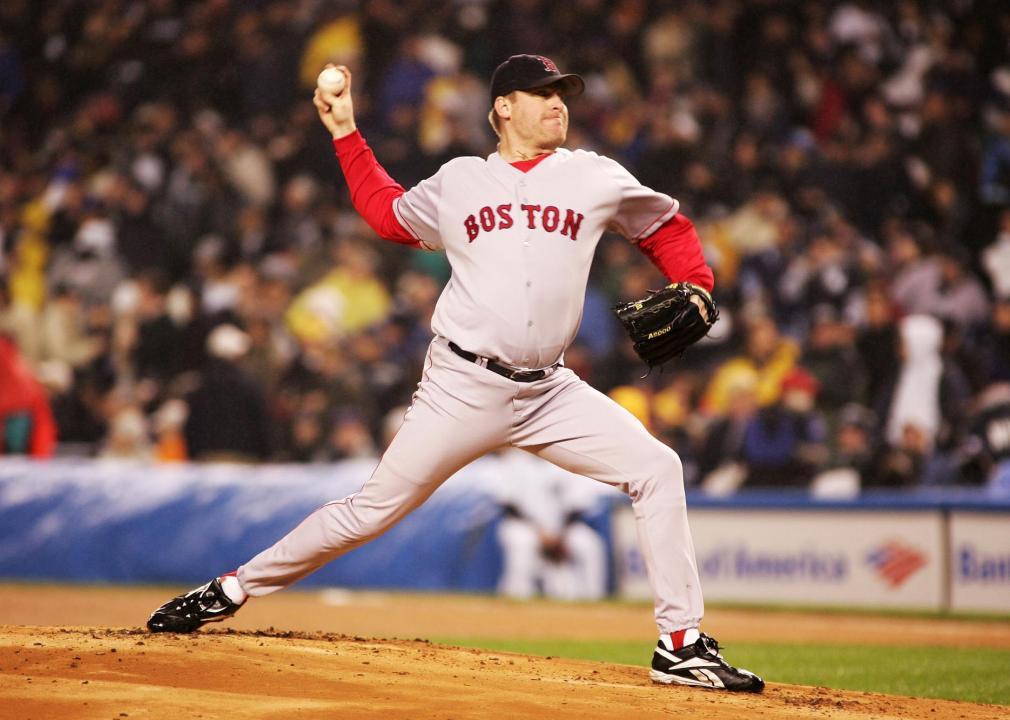 Curt Schilling’s comeback is iconic and will forever be part of Boston Red Sox lore.

Schilling was the scheduled starter for Game 6 of the 2004 AL Championship Series after Boston dropped the first three games of the series. He had suffered a torn tendon sheath in his right ankle during the AL Division Series, so to contain it enough for him to pitch a must-win game, team doctor Bill Morgan sutured the ankle skin to the tissue surrounding the tendon. The hope was that it would temporarily hold everything in place.

Blood colored Schilling’s sock red by the start of the first inning, but the ace held on and allowed only one run and four hits in seven innings. The win tied the series at three games apiece, and Boston went on to defeat the New York Yankees in Game 7. Schilling then pitched Game 2 of the World Series as the Red Sox went on to a historic title, their first since 1918. 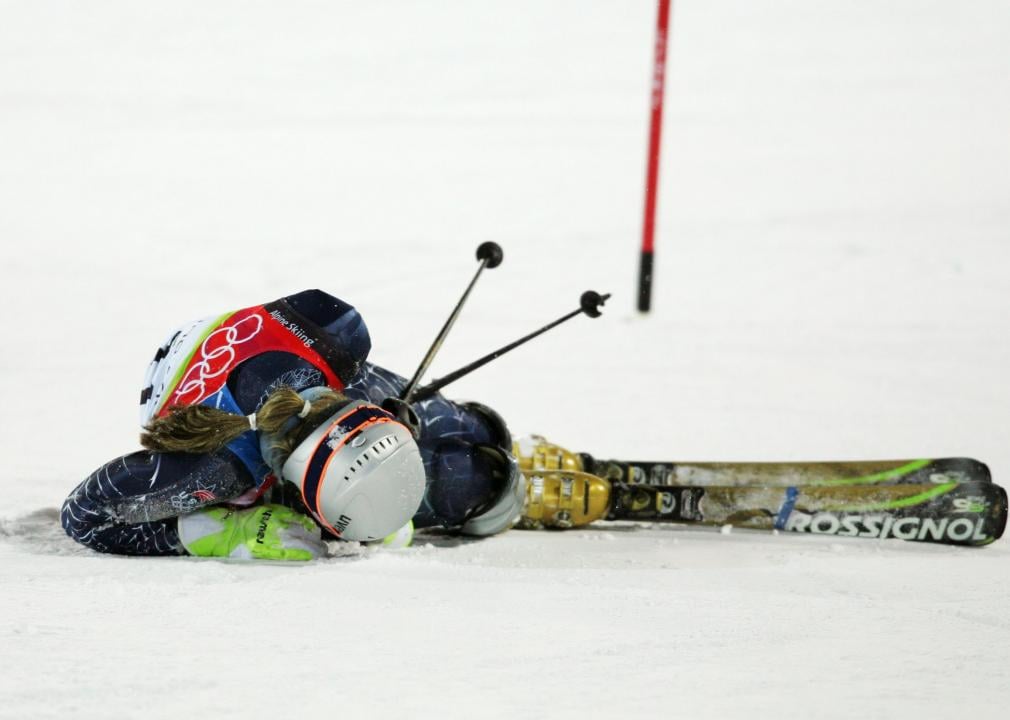 The three-time Olympic medalist has been airlifted off multiple mountains, notably at the 2006 Olympics in Torino, Italy, and the 2013 World Championships in Schladming, Austria. She returned days after the Olympics crash to finish eighth. Vonn has suffered multiple ACL and MCL injuries and has fractured bones in her knee, arm and ankle. Many times she has returned to compete, putting off surgery or rehab until the offseason, according to NBC Sports. She is one of the greatest skiers in winter sports history. 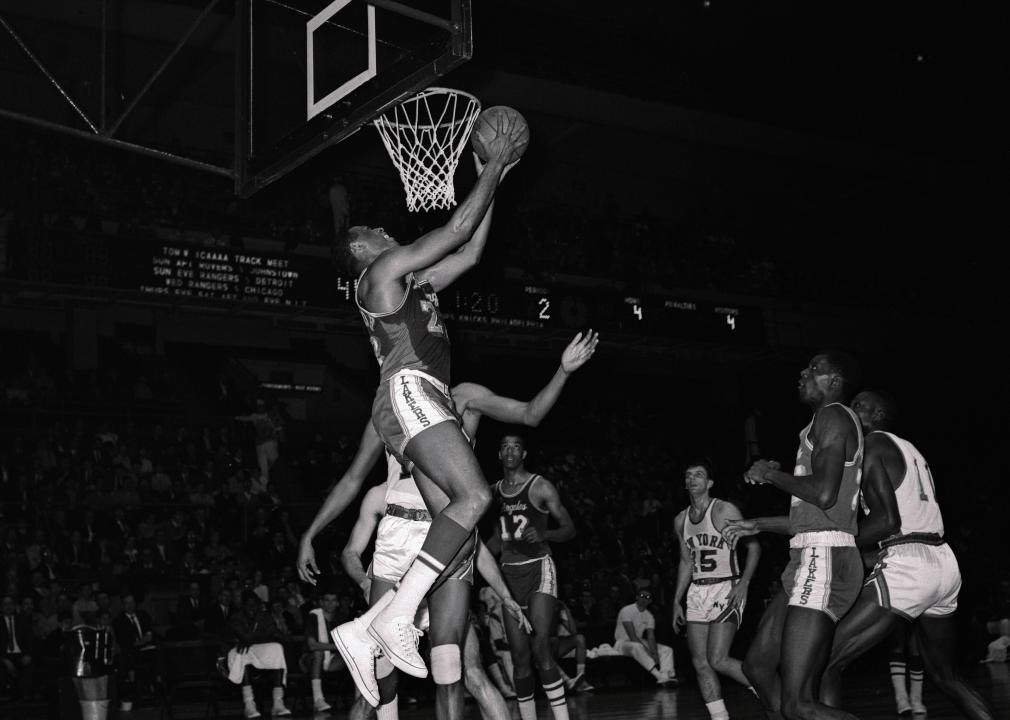 Elgin Baylor, who spent his entire 14-year career with the Los Angeles Lakers, is often overlooked as one of the NBA’s greatest players. He won the Rookie of the Year award and All-Star MVP honors in the 1958-59 season. A few seasons later, he became the first player to finish in the top five in four different statistical categories. Baylor’s streak of seven consecutive All-Star nods was broken only by a dislocated knee cap suffered in 1961.

Baylor played in an era before arthroscopic knee surgery was available, stunting numbers he might have put up in his prolific Hall of Fame career. Baylor came back to earn four more consecutive All-Star nods while averaging 25.4 points per game during the stretch. Knee injuries ultimately ended his playing career after 1972, and he went on to coach and work as an executive in the NBA. 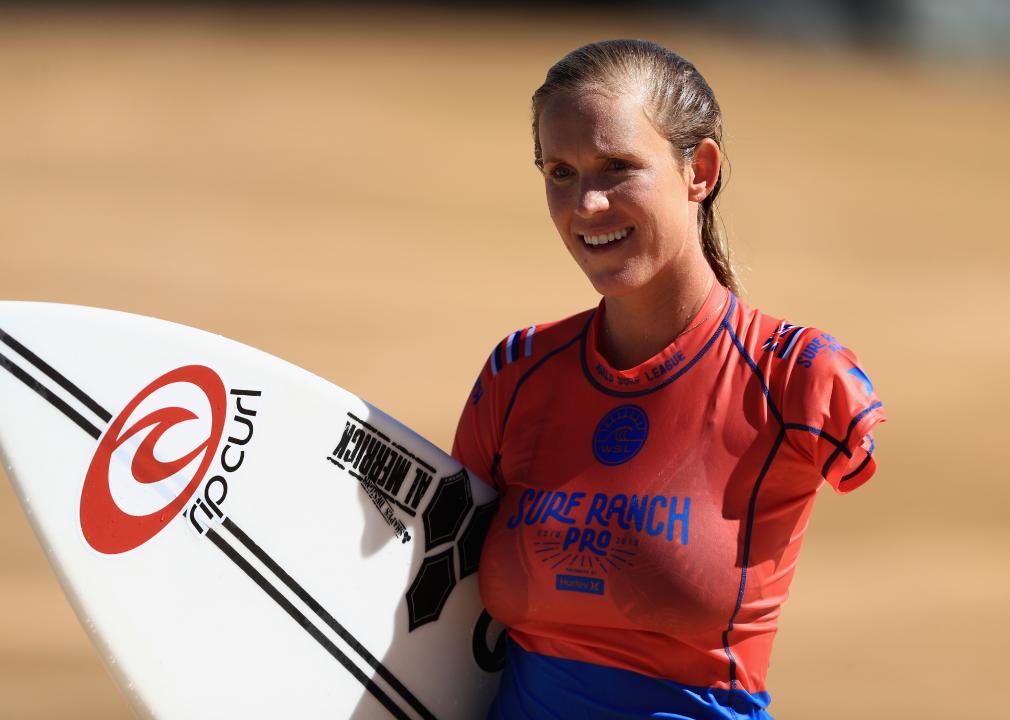 Bethany Hamilton’s comeback story is literally made for the movies. Hamilton was 13 years old and moving up through the surfing ranks when she was attacked by a tiger shark off the shores of Hawaii in 2003. It severed her left arm, and she lost nearly two-thirds of the blood in her body.

One month later, she was back on her board. Within two years, she had won her first national title in surfing. And six years after the attack, she made her World Tour debut. Her best showing came in 2016 when she finished third at the Fiji Women’s Pro event over a six-time world champion and the world leader. She recently got back on the circuit after giving birth to her third child in February 2021.

This story originally appeared on Hydragun
and was produced and distributed in partnership with Stacker Studio.