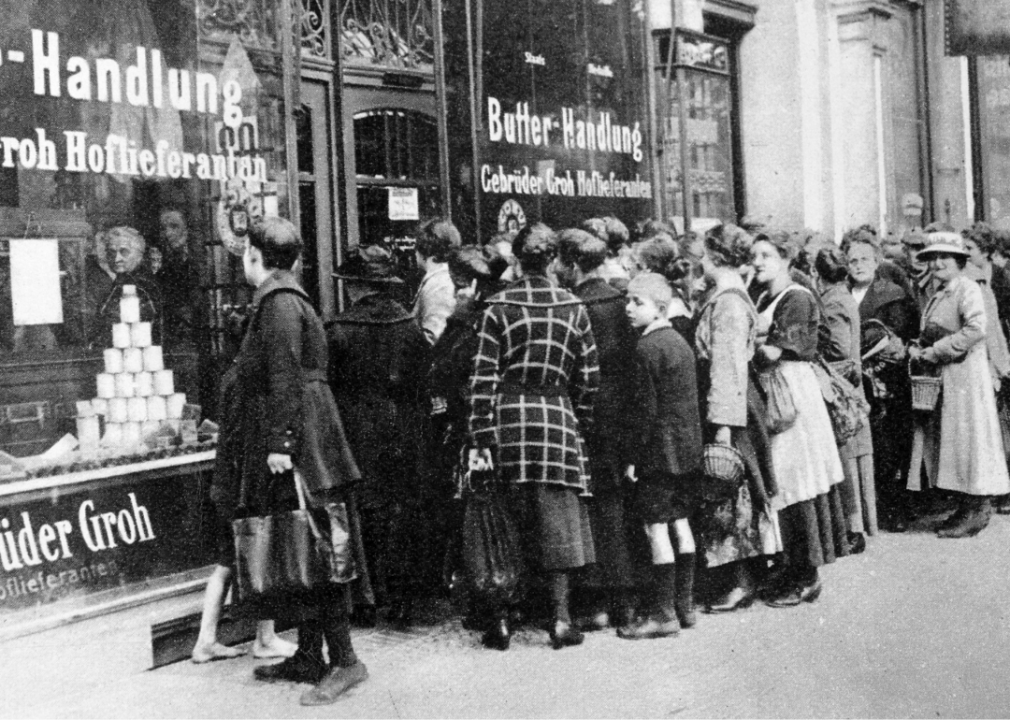 In 2006, Zimbabwe experienced one of the most severe cases of hyperinflation in recorded history. The economy was unstable, with many of the country’s citizens unable to provide for their families. “[There] is barely enough to feed yourself, let alone your family. It’s like we are living hand-to-mouth,” a taxi driver told the BBC at the height of Zimbabwe’s economic crisis.

However, Zimbabwe’s financial woes aren’t unique to modern times. Periods of hyperinflation pepper the history of countries all over the world due to government overspending, wars, corruption, and the excessive printing of money until the paper itself is worth more than currency. This kind of economic devastation can lead to food shortages and rioting as hyperinflation can completely destabilize a nation.

For context, hyperinflation is typically considered to be a rate of 50% or more each month, which was established by Phillip Cagan, an economist for America’s National Bureau of Economic Research, in 1956.

Using information from news articles as well as scientific and academic reports, Stacker pulled together 10 international instances in which countries experienced severe cases of hyperinflation that, at times, lasted for several years. Some of these countries are still feeling the impact of that economic devastation despite years, even decades, having passed.

You may also like: History of censorship in America 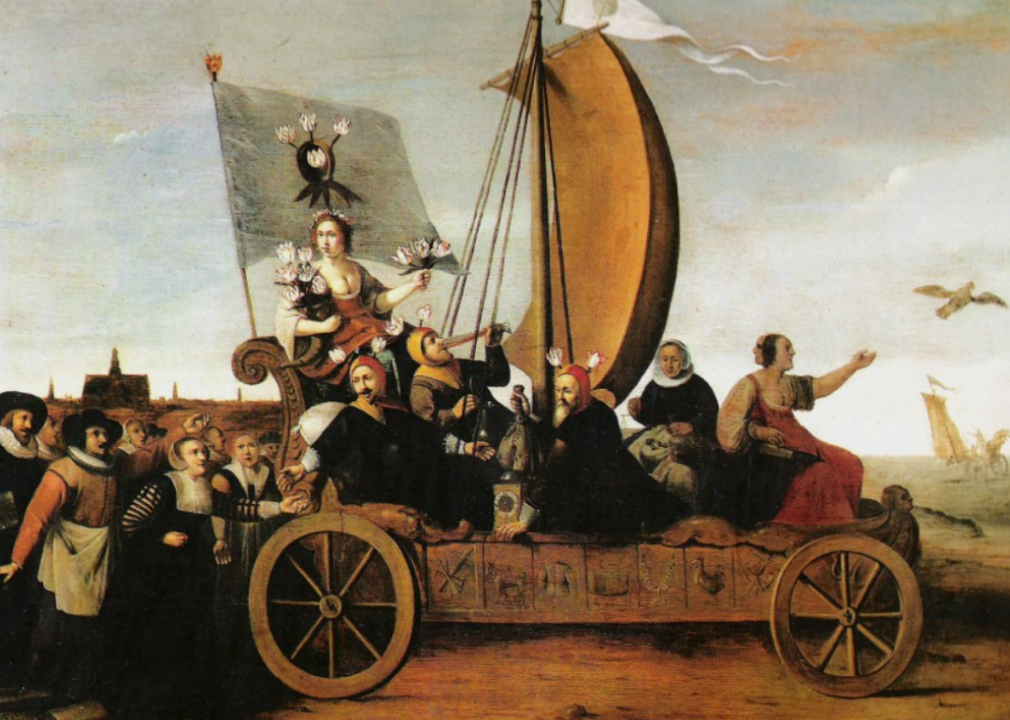 One of the earliest examples of hyperinflation came from an unusual source: the tulip market. “Tulipmania,” as Scottish author Charles MacKay dubbed in his book “Memoirs of Extraordinary Popular Delusions and the Madness of Crowds,” took hold of Holland in 1634. “The rage among the Dutch to possess them was so great that the ordinary industry of the country was neglected, and the population, even to its lowest dregs, embarked in the tulip trade,” MacKay wrote.

The tulipmania trend eventually died down in 1637 when buyers couldn’t afford the high prices, according to Smithsonian Magazine. However, some modern scholars, such as Anne Goldgar, a historian and author of “Tulipmania: Money, Honor, and Knowledge in the Dutch Golden Age,” believe that the impact of the tulip market may have been exaggerated. 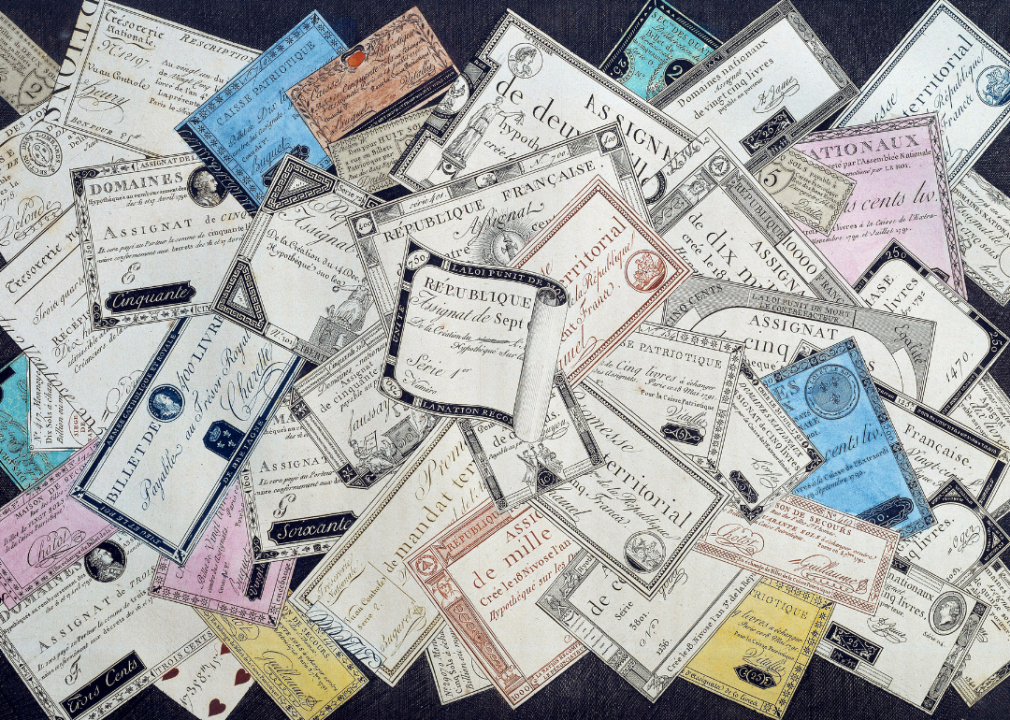 The people of France experienced a period of hyperinflation starting in 1795 during the French Revolution. During this time of financial hardship, from 1793 to 1795, the National Assembly, the governing body during the revolution, excessively printed assignats—France’s currency at the time—to repay debts, according to the Foundation for Economic Education.

By November 1795, 19.7 billion assignats were in circulation and the currency’s value had decreased by 99% since it was first printed. Inflation got so bad that, in August 1796, it reached a high of 304%, according to the CATO Institute. To combat the hyperinflation, the National Assembly implemented price controls and stopped printing currency in December 1795. 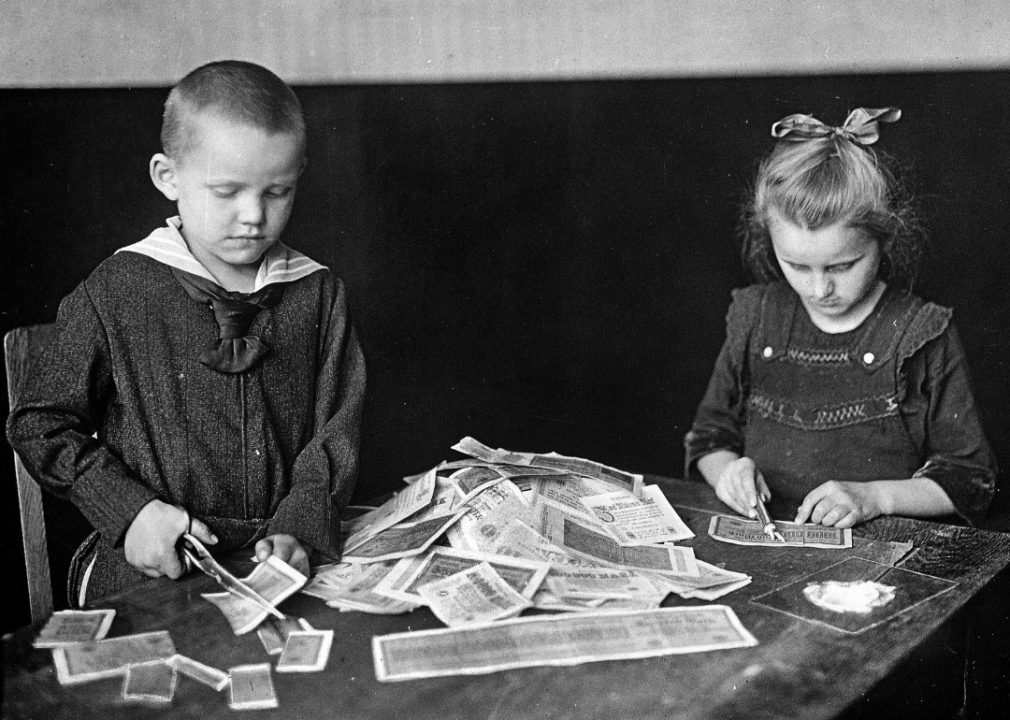 The hyperinflation Germany experienced in the 1920s could be traced back to its loss in World War I. The Treaty of Versailles imposed a heavy burden of reparation debt after the war, leading the German government to print more and more of its currency which led to its devaluation. The country missed a payment in late 1922, and, as a result, by October 1923, the country’s monthly inflation rate reached 29,500%, according to the CATO Institute.

To put this into perspective, in January 1923, bread cost 250 marks—by the end of that year, it reached 200 million marks, according to the BBC. The economy began to stabilize after Germany replaced its currency, the papiermark, with the rentenmark. 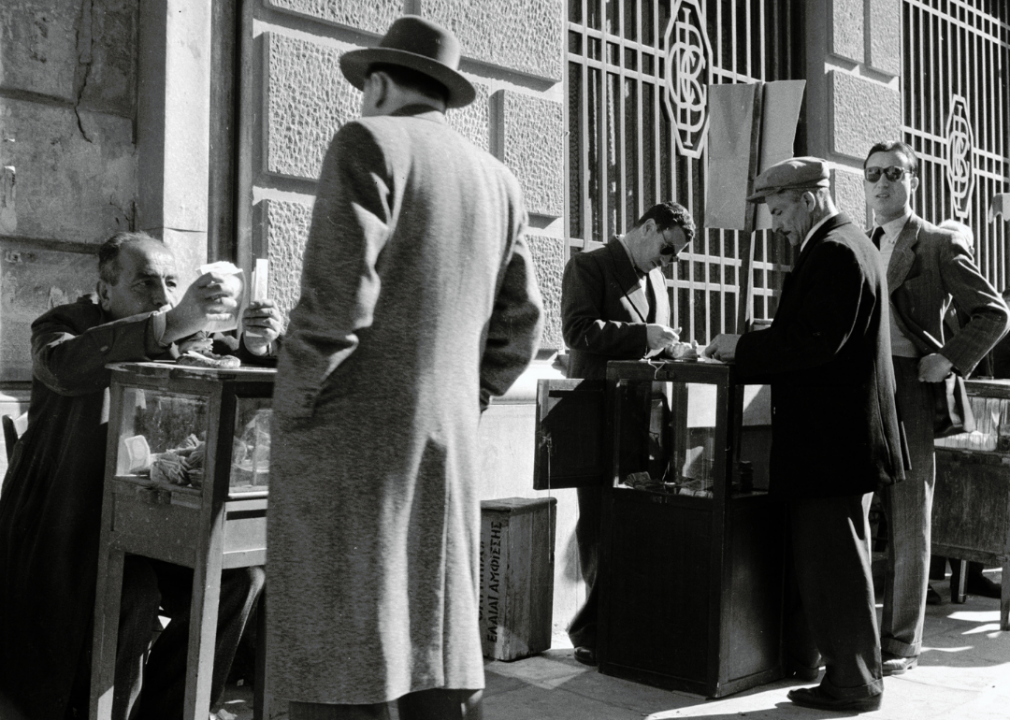 According to an academic paper published by the Cambridge University Press, Greece’s financial challenges with hyperinflation began after it was occupied by the Axis powers during World War II. Unfortunately, Greece’s hyperinflation only got worse after it was liberated, reaching a peak of 13,800% in October 1944, according to the CATO Institute. During this time, the country became encumbered with debts as trade was essentially eliminated as a result of the war.

Greece’s extreme money woes came to an end in December 1945 after the country implemented several different strategies to stabilize the country over a period of 18 months. These approaches included creating a supra central bank, foreign assistance, and overhauling the country’s currency. 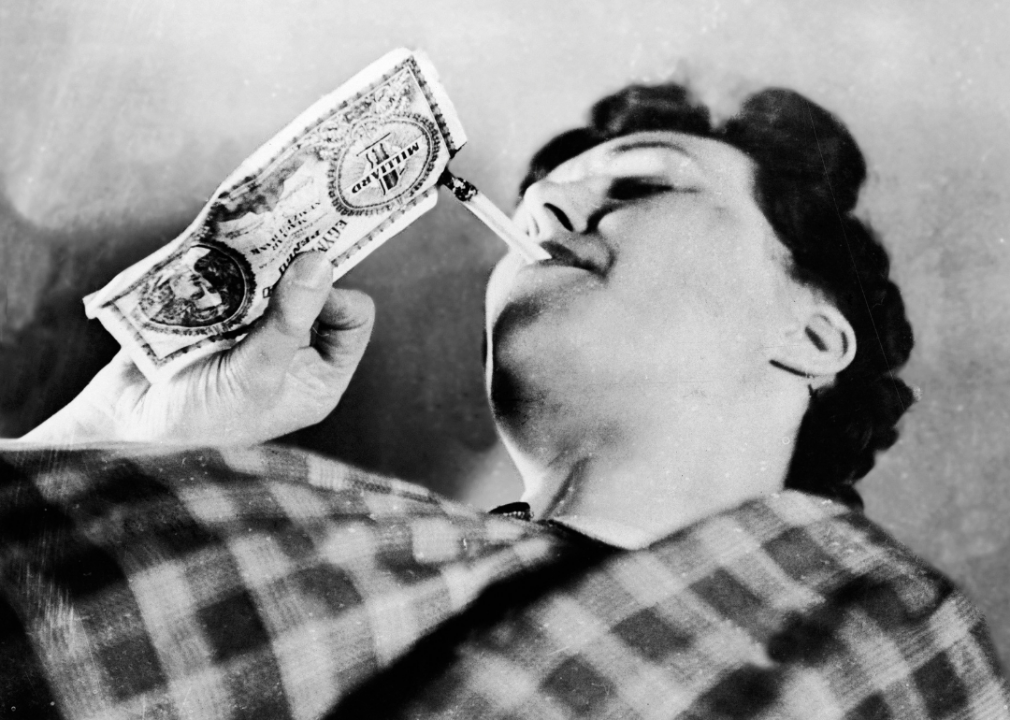 Already in a depleted state after the first World War, World War II and the overprinting of its currency hammered at Hungary’s economy. The country began to recover after financial reforms, but not before the country was ordered to pay massive reparations to Russia as part of a peace treaty.

You may also like: History of trucking in America 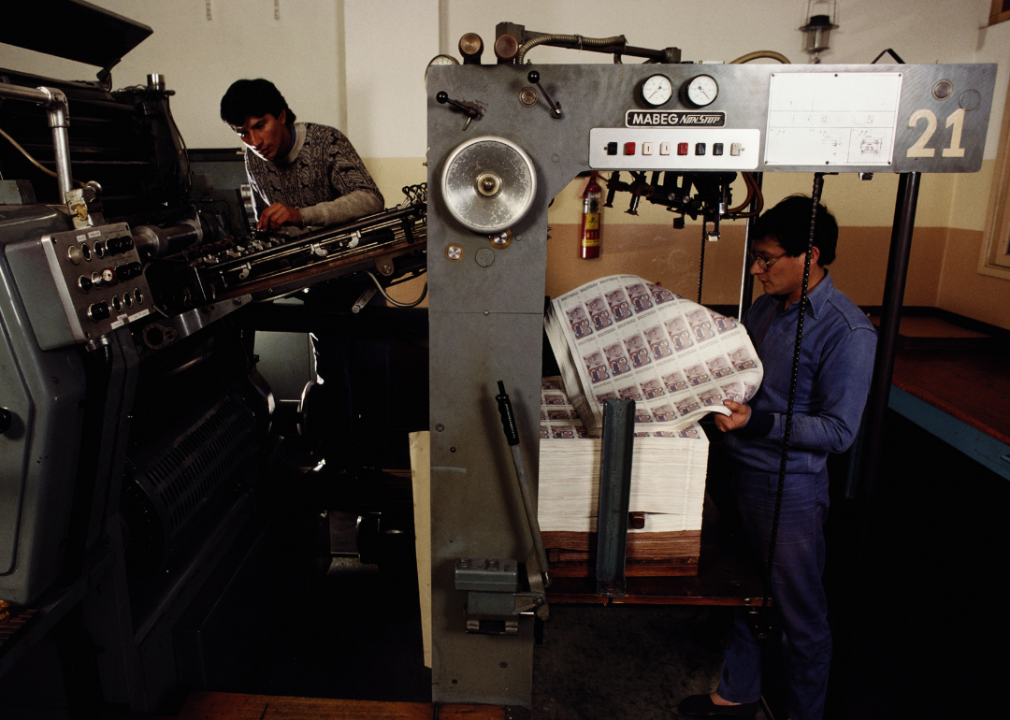 Like many countries on this list, Argentina’s hyperinflation came as a result of war debts. After the country suffered a loss in the Falklands War in 1982, by 1989, only 30,000 people out of 30 million were paying income taxes, according to Reuters.

Monthly inflation rates reached 197% by July 1989, according to the CATO Institute. This resulted in riots and looting for resources until Carlos Menem took over the country. After spending the 1990s decreasing import taxes and bringing in foreign investments, Argentina’s inflation rates finally dropped significantly. 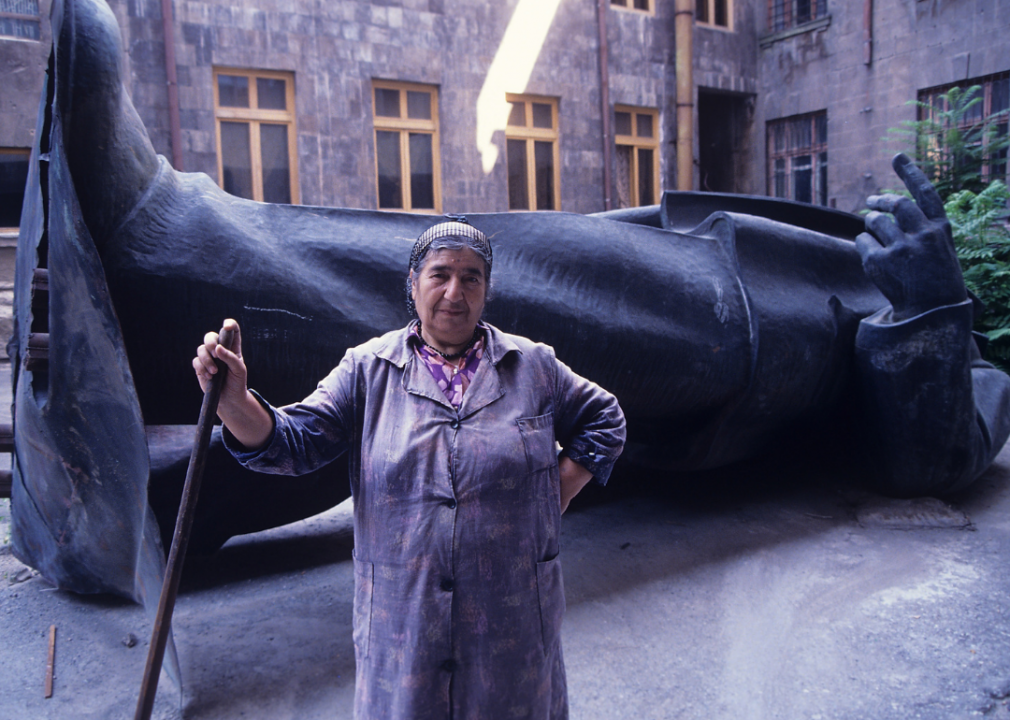 Armenia was one of several countries whose economy fell on hard times after the Soviet Union broke apart in 1991. Unfortunately, this is not where Armenia’s troubles ended. In 1988, a devastating 6.8 earthquake killed 60,000 Armenians and left thousands of people homeless, according to the BBC.

After the earthquake, government leaders decided to shut down the Armenian Nuclear Power Plant, also known as the Metsamor Nuclear Power Plant, which led to severe energy and supply shortages in the early to mid-1990s. These factors eventually led to a monthly inflation rate of 438% in November 1993, according to the CATO Institute, with prices doubling nearly every 13 days. 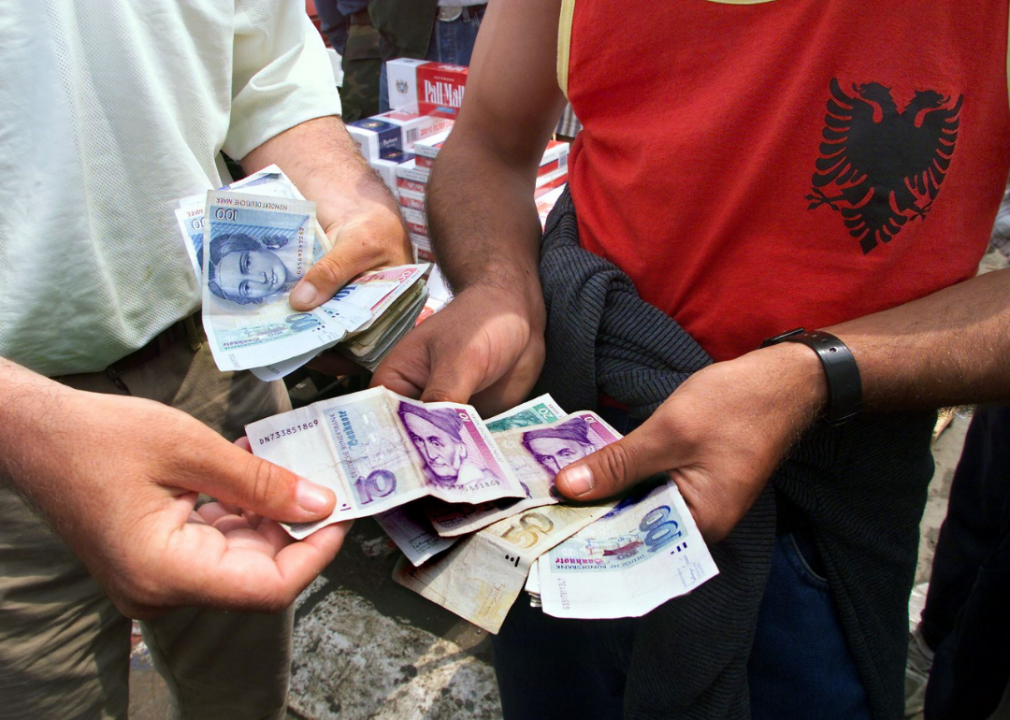 After Hungary and Zimbabwe, Yugoslavia is the third-worst recorded period of hyperinflation due to government corruption, price controls, and the Yugoslav Wars. According to the CATO Institute, more than 80% of the country’s money went toward its military and police.

By January 1994, Yugoslavia’s monthly inflation rates reached a height of 313,000,000%, according to the CATO Institute, with prices doubling every 1.41 days. To avoid starvation, many Yugoslavians would wait in long lines for food. In order to end the severe economic crisis, Yugoslavia completely restructured its monetary policies and currency, the dinar. 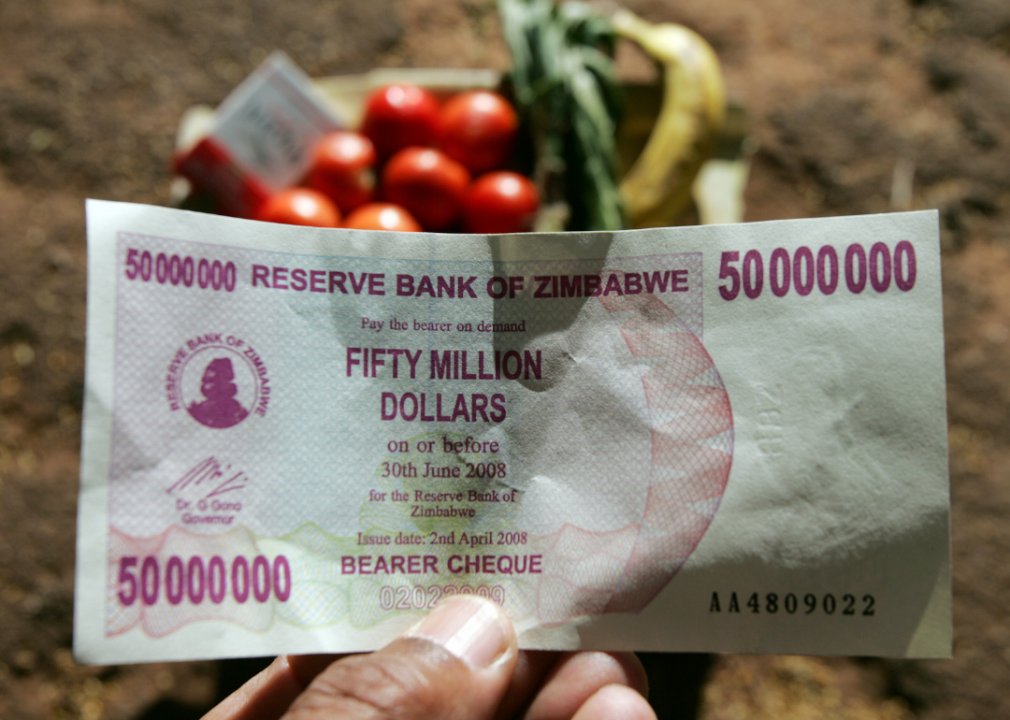 The history behind Zimbabwe as well as the country’s hyperinflation is complex, but, put simply, can be traced back to government policies and supply shortages. In 2006, the country printed a vast amount of its currency, the Zimbabwean dollar (ZWD), to repay its loans from the International Monetary Fund, and a second time that same year to pay its public employees. The country’s financial woes became so severe that inflation hit 79,000,000,000% in 2008, according to the CATO Institute, making it the second-worst instance of hyperinflation in recorded history.

“People are willing to lend money, but they are not willing to lend it for nothing,” a Zimbabwean lecturer told the BBC in 2006. “It’s usually at a rate of 90 or 100%.” Unfortunately, while there have been some improvements, Zimbabwe’s economy continues to struggle with hyperinflation reaching 300% as recently as 2019, according to the IMF. 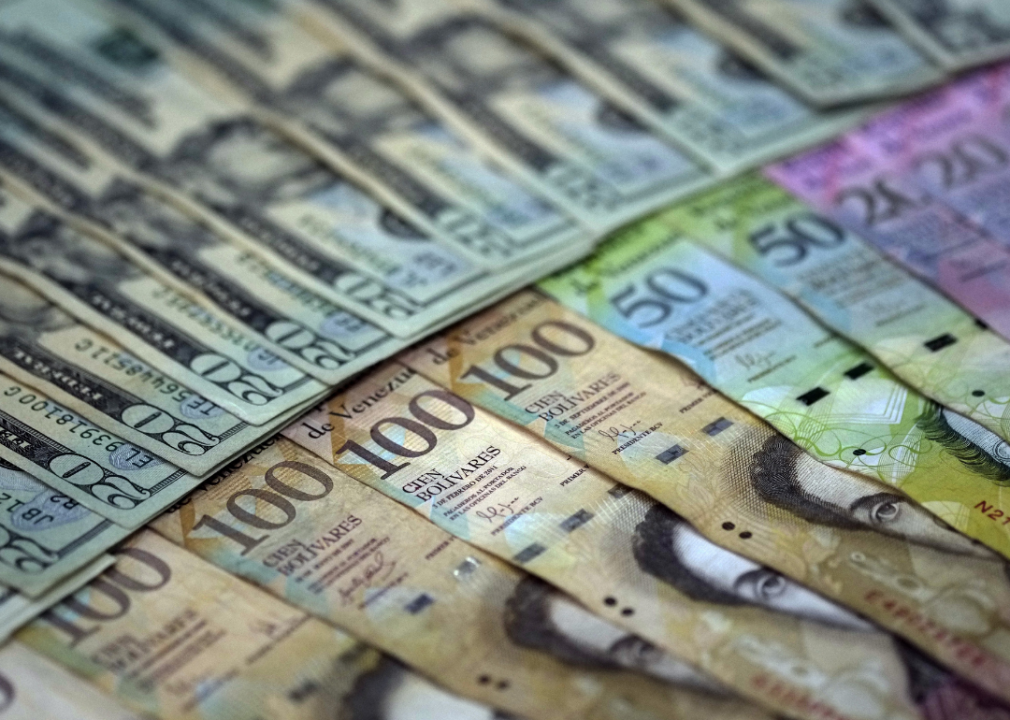 One of the most recent examples of hyperinflation, by 2020, Venezuela’s economy had diminished for the seventh year in a row, Bloomberg reported. Venezuela’s financial problems started in 2013 as a result of government overspending and overprinting of its currency. In 2014, inflation hit nearly 69% with food and beverages taking the largest increase in price increase, according to Reuters. As a result, inflation caused prices to double about every two weeks, according to an academic study published in 2020 by The University of Texas at Austin.

The country continues to face challenges with inflation as Venezuela’s central bank, Banco Central de Venezuela, released a statement in March 2021 that it would be releasing new 200,000, 500,000, and 1 million bills “to meet the requirements of the national economy.”