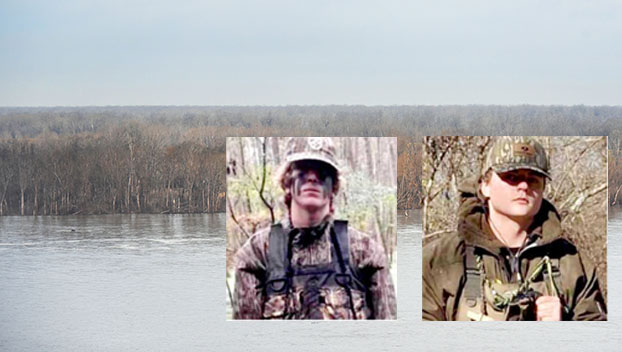 When two young hunters went missing on the Mississippi River in 2020, hundreds of law enforcement officers, search crews and volunteers spent weeks and months looking for them on land, water and by air.

A year later, the fathers of the hunters are still on the water, but have no real expectations of finding their boys. Instead, they’re searching for something inside themselves on a river that now will forever be a part of their lives.

“Look at that,” said Med Palmer as he recently drove toward the river through rural Claiborne County. “It’s going straight up. It’s going to be a good day on the water.”

Palmer was referring to steam coming from the Grand Gulf Nuclear Station. The fact it was going straight up indicated there was no wind.

“It can get pretty rough out there, especially if you have a south wind,” Palmer said.

Zeb Hughes, 21, of Wesson, and Gunner Palmer, 16, of Hazlehurst, went missing on Dec. 3, 2020, while trying to locate ducks on the river for a wounded warrior hunt taking place the following day. It was a hunt sponsored by Jeep Sullivan’s Wounded Warrior Outdoor Adventures which provides outdoor experiences for military veterans and the two were helping as volunteers.

They were their fathers’ only sons. They never returned.

Items from the boat were recovered in the following days and the boat Hughes and Palmer were in was found damaged. The young men have not been located.

MILES OF SEARCHING FOR HUNTERS AND QUESTIONS

The drive to the river isn’t familiar to just Palmer. His son’s dog, Ranger, has been there every step of the way. As they get closer to the river, Ranger seems to become more excited and spends less time sitting on the back seat and more with his front paws on the front console as he looks through the windshield.

Palmer was meeting Barry Hughes, Zeb’s father, at a boat launch that morning. It’s a drive where Hughes asks himself questions that plague him daily.

“Every trip over there, it’s the same thing that goes through my mind when I lay my head down at night,” Hughes said. “What happened?

“Was there anything I could have done? Why didn’t those two boys have their life jackets on? What could have happened so suddenly that they couldn’t prepare for?”

REMINDERS OF MISSING SONS ALL AROUND

The loss of their sons permeates the daily lives of Hughes and Palmer. Palmer, manager of Copiah Wildlife Management Area for the Mississippi Department of Wildlife, Fisheries and Parks, said his job is even a reminder.

“Some days it’s just hard to get up and get going, but you make yourself go,” Palmer said. “You think of them continuously. My job is particularly hard. I had a job where he could come with me. He grew up on that WMA.”

Hughes said no matter what he’s doing, he thinks of his son every moment. Hunting seasons have been the most emotional.

“That was mine and his thing — deer, turkeys, ducks — anything that moved,” Hughes said. “I started making food plots without him this year.

“That’s something I haven’t done without him in 22 years. I haven’t hung a deer on a skinning rack without my son by my side. Zeb started hunting with me when he was 3 or 4 years old. Those things are tough.”

FINDING PEACE ON THE MISSISSIPPI RIVER

On the river, things are different for Hughes.

“I don’t know how to describe it,” he said. “You do feel a peace come over you when you’re in that boat. I feel like I’m out there with them.”

As Palmer predicted, it was a calm day on the water as the miles and hours passed. Trees were beginning to show the colors of fall and sand beaches seemed to beg to be enjoyed.

It’s a river of beauty like no other in the state. It’s a beauty not lost on Hughes.

“I look out across that river and if I was in Zeb’s place, I’d rather than be put to rest there than in a pine box in a cemetery,” Hughes said. “In a sense, I’m kind of thankful he gets to enjoy that.

“Sometimes I think those boys don’t want to be found because they are where they love to be. I’ve told my wife I’d like to have my ashes spread in that river so I can be there with them.”

Palmer expressed similar feelings. Looking over the river from the bank as the day came to a close and the sun hung low in the sky, he talked about the irony of something he finds so beautiful and peaceful being a river that took the life of his son.

“Isn’t that something,” Palmer asked.

Like Hughes, Palmer’s life largely centered around hunting with his son and that love of hunting brings peace to him.

“I’m glad God took him while he was doing something he loved,” Palmer said. “I never thought hunting would take my son, but we made a lot of memories out hunting.

“That’s how I came to terms with it. That’s what life is about — making memories. When they’re gone, all you’ve got left are those memories.”

And those memories are what bond Hughes and Palmer to the Mississippi River.

“We’ll all have to move on, but we’ll never forget them,” Palmer said. “I reckon the rest of my life I’ll be coming out here periodically.”