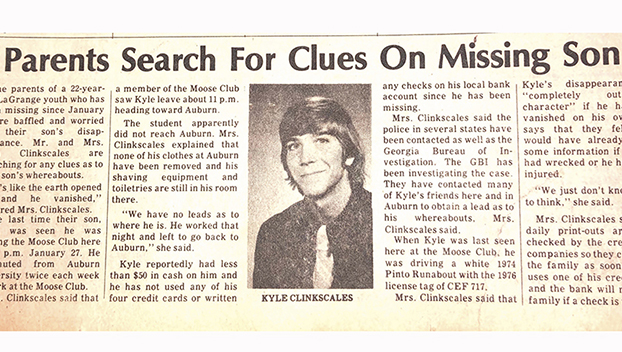 The car that a Georgia man was driving when he disappeared in January 1976 was found and bones were found inside, officials confirmed Wednesday.

The Troup County Sheriff’s Office and Chambers County Sheriff’s Office held a joint press conference Tuesday morning, saying that Kyle Clinkscales’ white Ford Pinto was recovered in a creek off of County Road 83 in Cusseta, Georgia. A couple of bones, believed to be human, were also found in the vehicle, according to Troup Sheriff James Woodruff.

“We believe those to be human in nature,” Woodruff said of the bones. “We’ve called in the GBI and they are currently at our facility taking that car apart if they can, looking at what’s in it to determine how many bones are in there and if they are indeed his bones.”

Clinkscales was on his way back to Auburn University when he disappeared in 1976. He reportedly left the Moose Club in LaGrange at 11 p.m. on Jan. 27, 1976.

“For 45 years, we have searched for Kyle and his car,” Woodruff said. “We have followed hundreds of leads and never really had anything substantial develop.”

“We don’t know if it rusted out and came open or if the water had gone down,” said Chambers County Sheriff Sid Lockhart.

Clinkscales’s ID and credit cards were found inside a wallet in the car. His parents, John and Louise, always held out hope that their son would be found. Both have passed away, with Louise dying earlier this year.

“It was always our hope we would find him before she passed away,” Woodruff said. “Just the fact that we have hopefully found him and the car brings me a big sigh of relief.”

Jimmy Earl Jones and Jeanne Pawlak Johnson were both arrested in 2005 on charges related to Clinkscales’ death but neither were charged with murder.

“I can’t speak to those as I was not part of that arrest. That was another administration, another prosecutor,” Woodruff said. “You’d have to direct those questions to them and why they made those arrests.”

Woodruff said TCSO is waiting to see what GBI finds when searching the car, which was full of mud.

“I want to see what the GBI finds in the car. How many bones they find. Do they find a skull?  Is there something we can take to the crime lab to determine if there was foul play? Was he murdered and left there? Did he run off the road and wreck there?” Woodruff said. “Those are things we hope to discover, but it’s been 45 years.”