15 of the most memorable holiday skits on ‘SNL’ 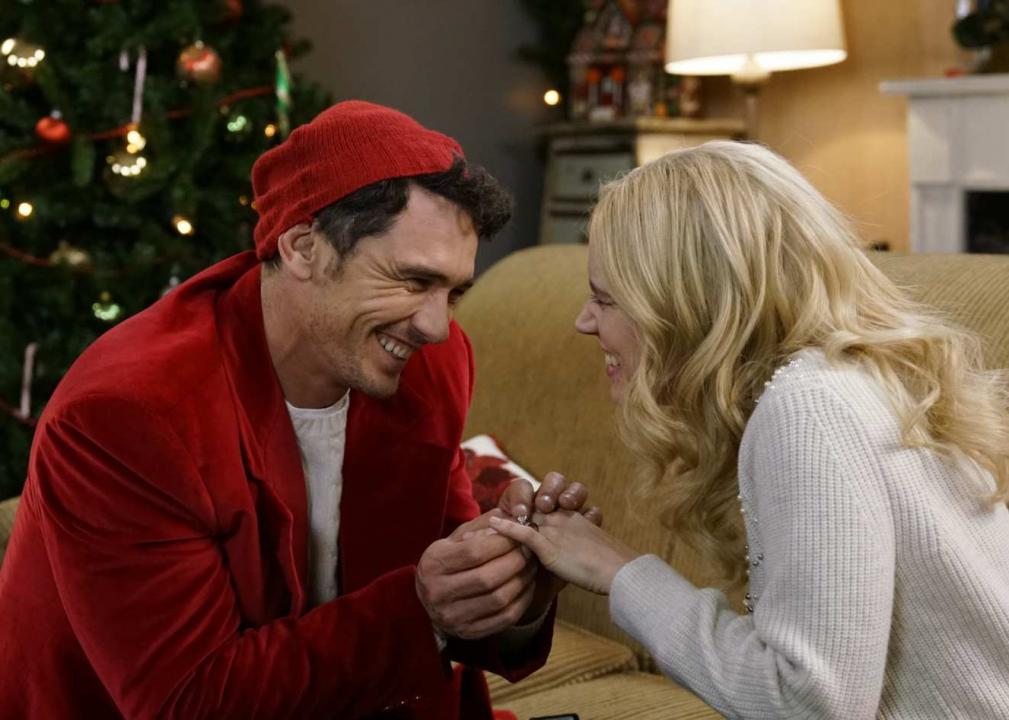 15 of the most memorable holiday skits on ‘SNL’

The comedic geniuses at “SNL” have brought hilarity to the holidays for almost five decades. Whether spoofing cheesy Hallmark movies or offering motivation from a mall Santa, “SNL” proves that the holidays are the perfect time of year to laugh.

To bring you some fantastic sketch comedy for the holiday season, Stacker searched various entertainment sites to compile a list of 15 of the most memorable holiday skits on “Saturday Night Live.”

From “SNL” regulars Chris Farley and Phil Hartman to seasoned hosts like Alec Baldwin, these comedians give their all to the characters they play, especially during the holidays. The domineering elf who teaches cobblers and closers made the list. A classic spoof on a favorite children’s television host is here too. These sketches mock all things merry and bright, from Christian Mass to Charlie Brown.

Join Stacker as we bring you the best holiday sketches “SNL” has aired. 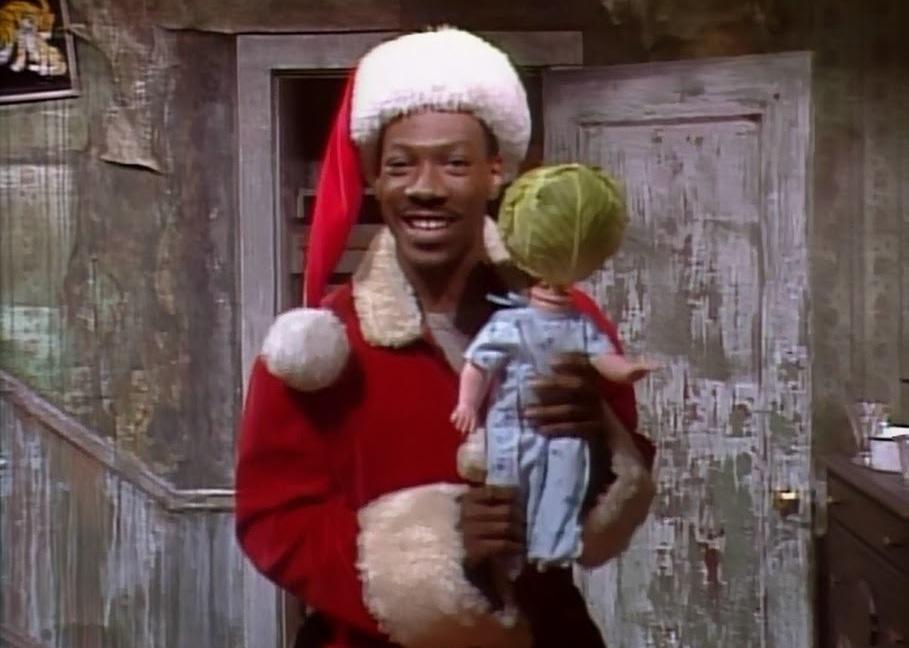 Eddie Murphy plays Mister Robinson, a parody of goody-two-shoes Mister Rogers. This well-loved character shows us what Christmas looks like in his neighborhood, even comparing himself to Santa because they both like to “sneak into your house late at night.” Robinson uses a Salvation Army bucket as a small business opportunity and tries to sell a homemade version of the 1980s hit present, the Cabbage Patch Kid. To make his version of the toy that parents brawled over, Murphy pulls off the head of a doll and inserts some stolen cabbage in its place. 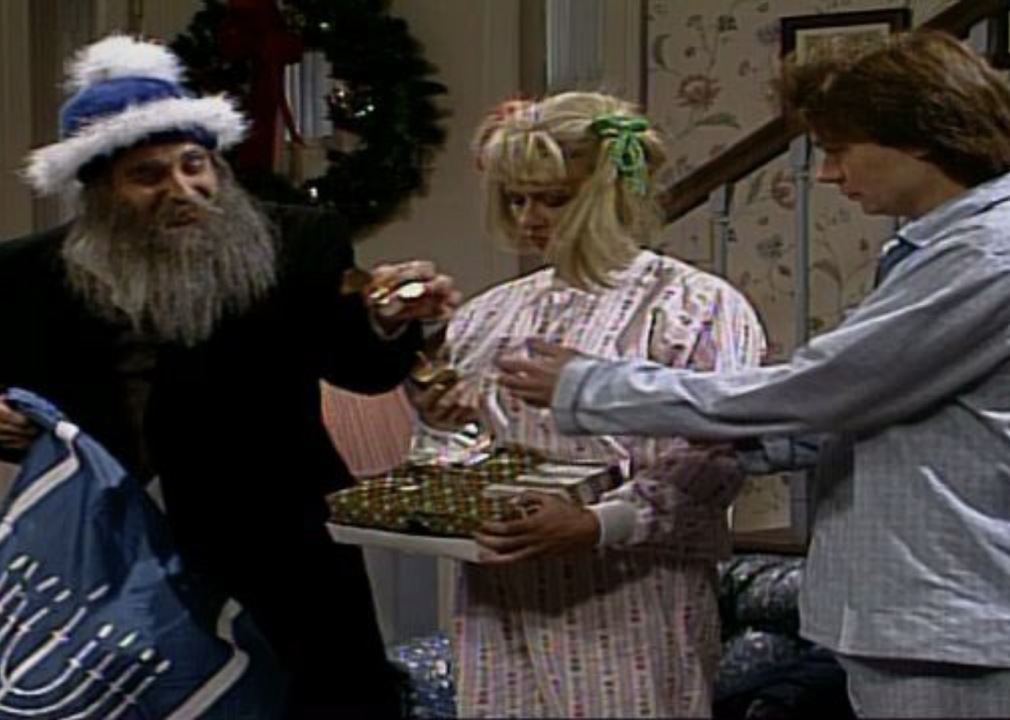 When Santa Claus comes down with the flu, Christmas is in jeopardy. Thankfully, Hanukkah Harry, Santa’s Jewish backup played by Jon Lovitz, is ready to take the reins. While the sketch definitely pokes fun at the lameness of Hanukkah, it’s also a touching holiday story. “On Moishe! On Herschel! On Schlomo!” 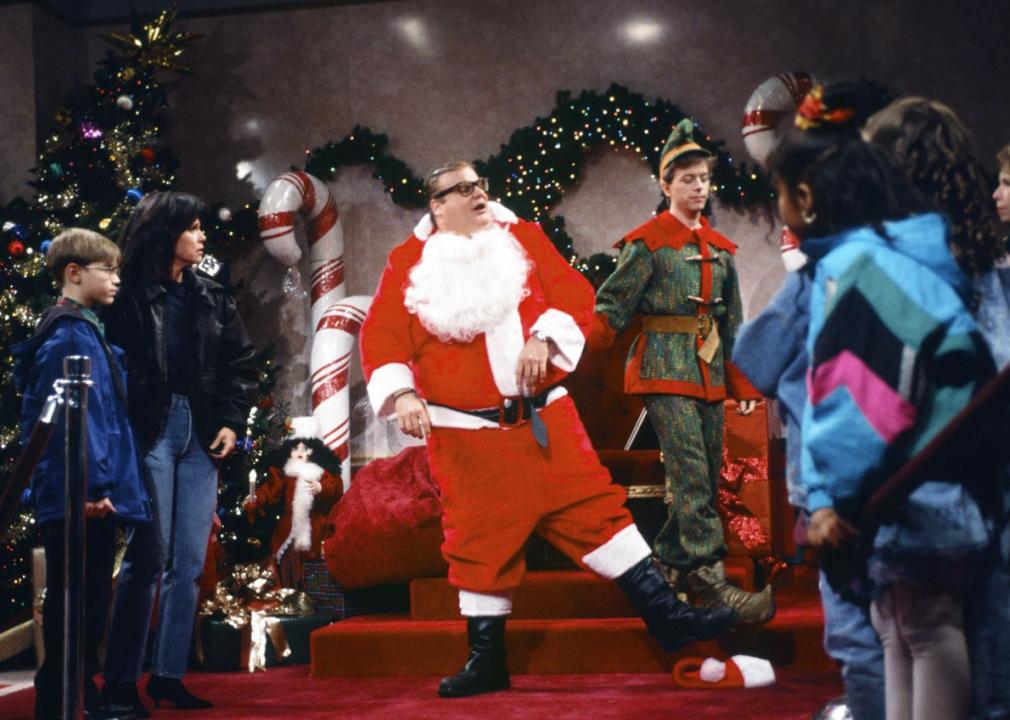 Iconic motivational speaker and recurring “SNL” mainstay, Chris Farley’s Matt Foley grabs a big red sack and suits up to play a mall Santa. He still lives in a van down by the river, but now he’s spreading Christmas cheer to shoppers. At one point, Farley attempts to come down the mall’s fake chimney, and the whole scene crashes to the ground. Farley proves his gift for physical comedy as guest Sally Field makes a cameo as the mother of a kid there to see Saint Nick. 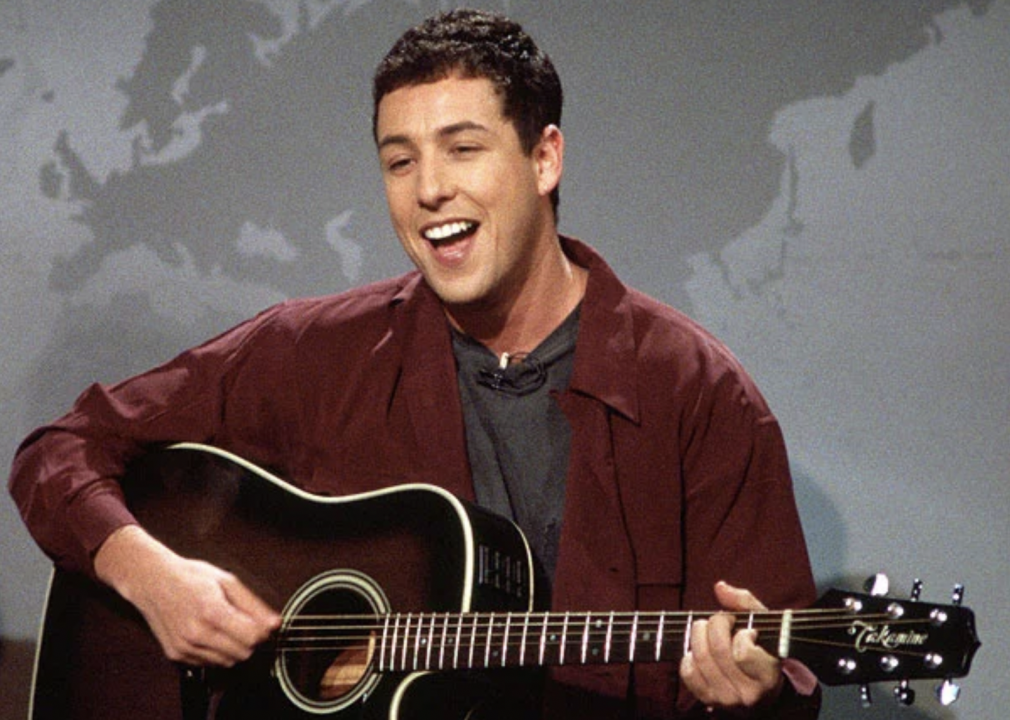 This holiday sketch features Adam Sandler doing what he does best: playing a nonsensical, hysterical song for laughs. The skit aired on “Weekend Update” on Dec. 3, 1994, and featured Sandler talking about how Christmas always left him feeling a bit envious given all the Christmas songs played on the radio. “Instead of one day of presents, we have eight crazy nights,” Sandler sang in homage to Hanukkah as he strummed his acoustic guitar and listed other Jewish celebrities. 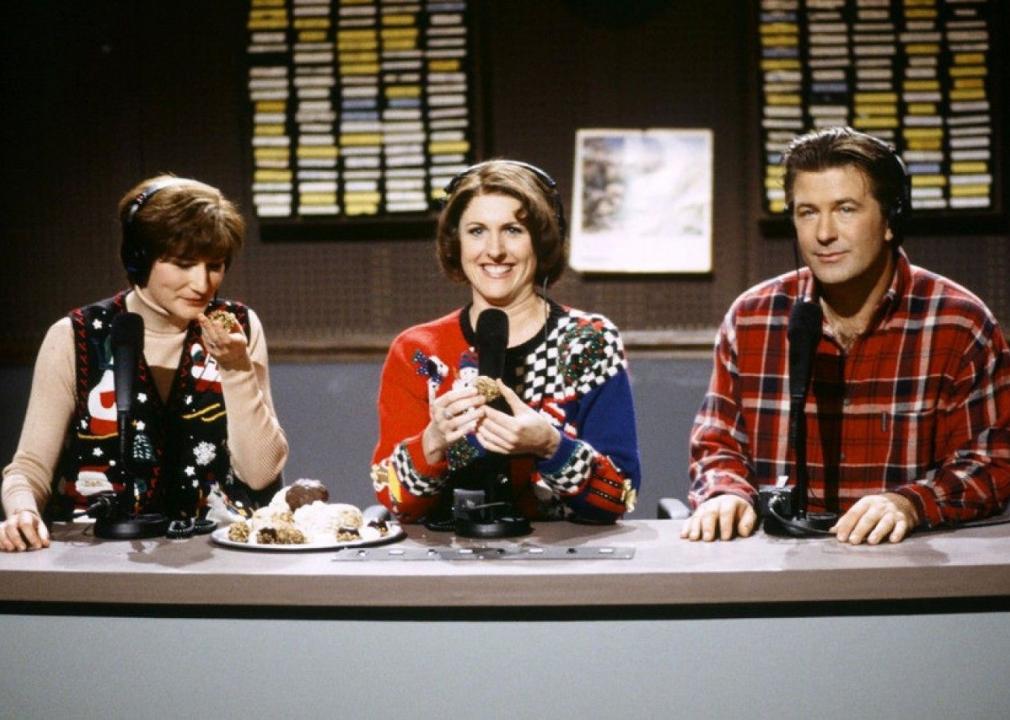 A true “SNL” classic, Schweddy Balls features “SNL” alums Ana Gasteyer and Molly Shannon as the hosts of NPR’s “Delicious Dish.” They announce their guest, baker Peter Schweddy, played by host Alec Baldwin. The baker introduces his famous holiday dessert, Schweddy Balls, by saying, “the thing that I like to bring out the most at this time of year are my balls.” There are balls for every taste at Schweddy’s bakery, “Season’s Eatings” and the radio hosts are very interested in handling and complimenting the dessert with seductive oohs and aahs.

You may also like: Fan campaigns that saved TV shows from cancellation 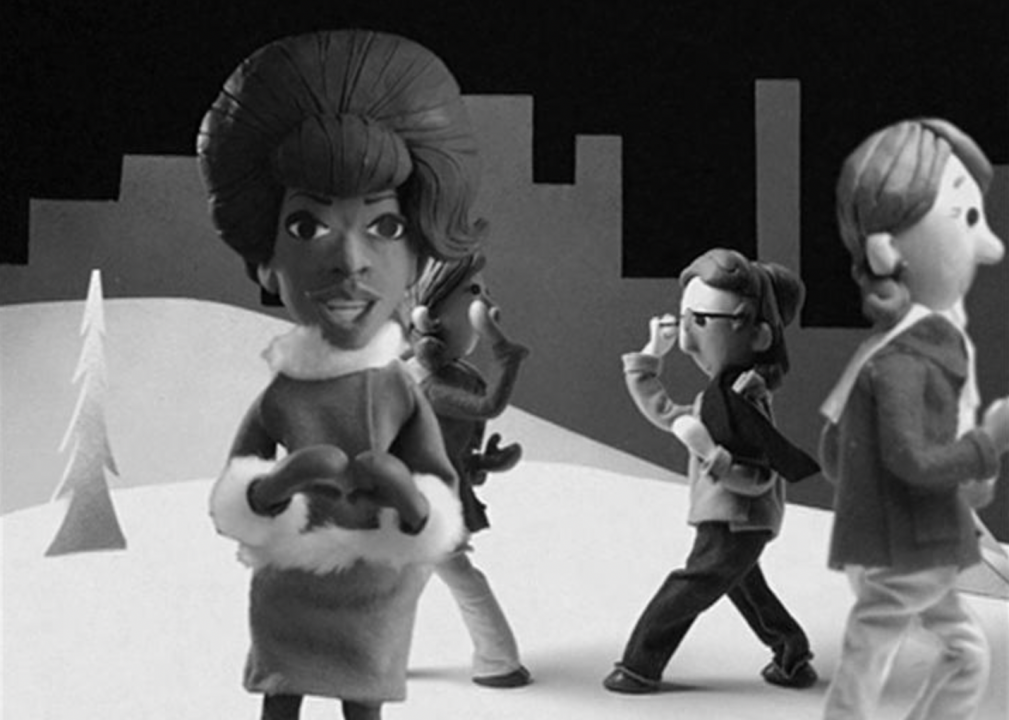 Christmastime For The Jews 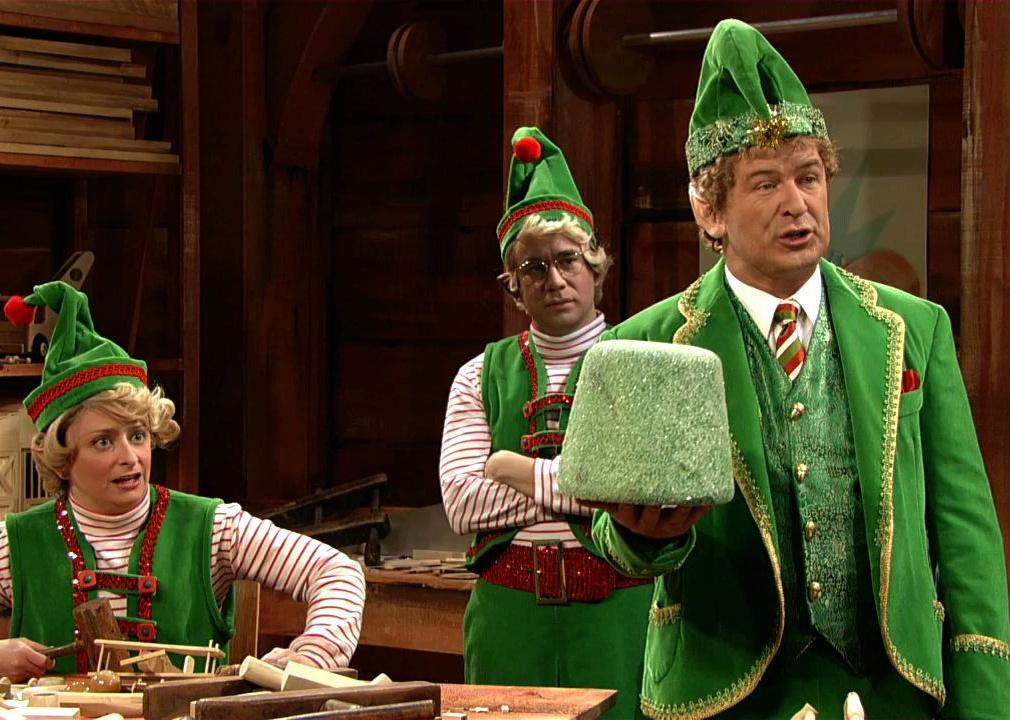 This “Glengarry Glen Ross” parody features Alec Baldwin reprising his role of aggressive closer Blake—if the closer were an elf from the North Pole. The elf is sent by the big guy to motivate the workshop elves, calling on Amy Poehler, Rachel Dratch, Seth Meyers, and Fred Armisen to “Always Be Cobbling.” In the sketch’s most memorable moment, Baldwin flubs his line, and instead of saying “cobbling,” he says “closing.”

Justin Timberlake lends his voice and comedic skills to this memorable digital short. He and “SNL” cast member Andy Samberg sing about the special Christmas surprise they are hiding in a gift box. They even offer other fellas instructions on how to impress women: “1. Cut a hole in a box/ 2. Put your junk in that box/ 3. Make her open the box/ And that’s the way you do it.” The track, written by comedy trio The Lonely Island, won the Primetime Emmy Award for Outstanding Original Music and Lyrics in 2007. 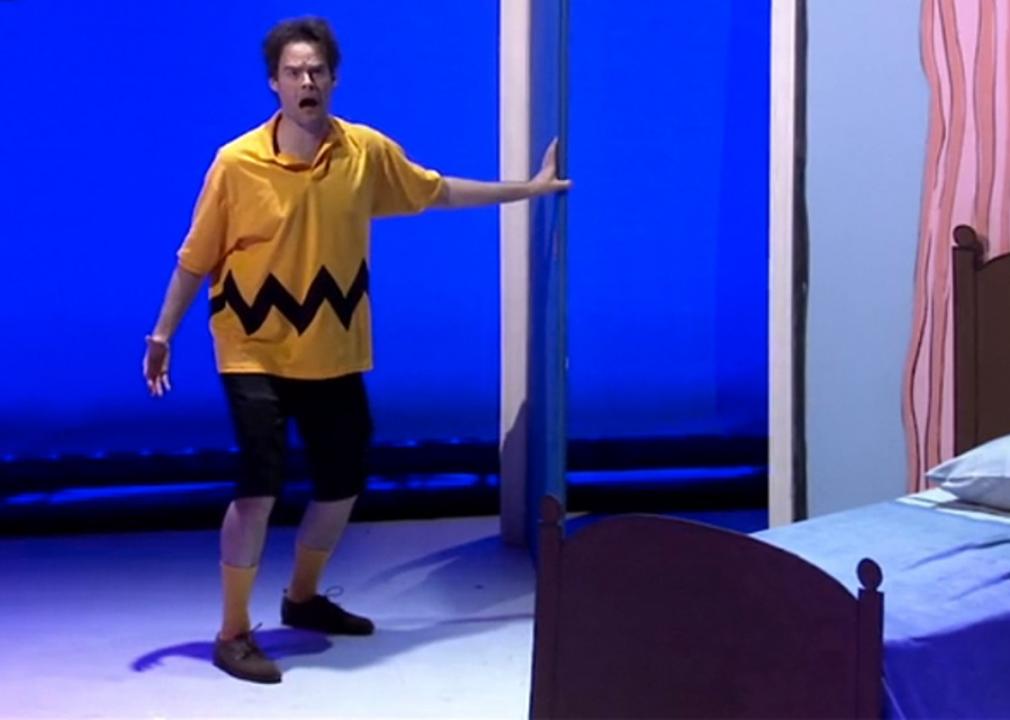 Bill Hader stars as Al Pacino playing our favorite lovable loser, Charlie Brown, in this twist on the Christmas classic presented as an off-Broadway show. The cast includes Martin Short as Larry David playing Linus, who gets in an expletive-filled fight with his best pal, Chuck. Kate McKinnon plays Edie Falco as Lucy, and in one scene, when the doctor is in, Lucy offers Charlie Brown a wide variety of prescription drugs. No Charlie Brown homage would be complete without the unseen but loudly heard adult played by Fran Drescher (voiced by Cecily Strong), who delivers a signature “Mwa-Mwa-Mwa.” 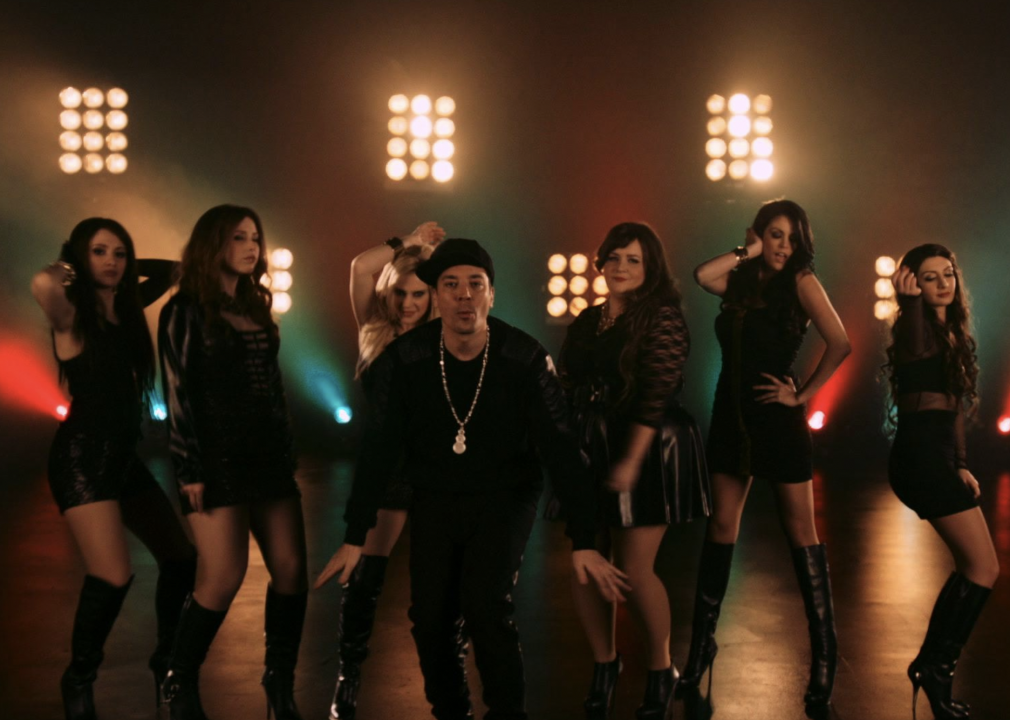 Do It On My Twin Bed

Featuring Vanessa Bayer, Aidy Bryant, Cecily Strong, Kate McKinnon, Nasim Pedrad, and Noël Wells, this skit addresses a tricky situation: What happens when your new boyfriend comes home with you for the holidays and sees your childhood bedroom? The “SNL” cast gets its girl band on, right down to their faux leather outfits in this Emmy-nominated tune. Whether it’s seeing a Christening dress, freaking in monkey sheets, or sharing a room with an uncle on a trundle bed, this sketch celebrated all things awkward. 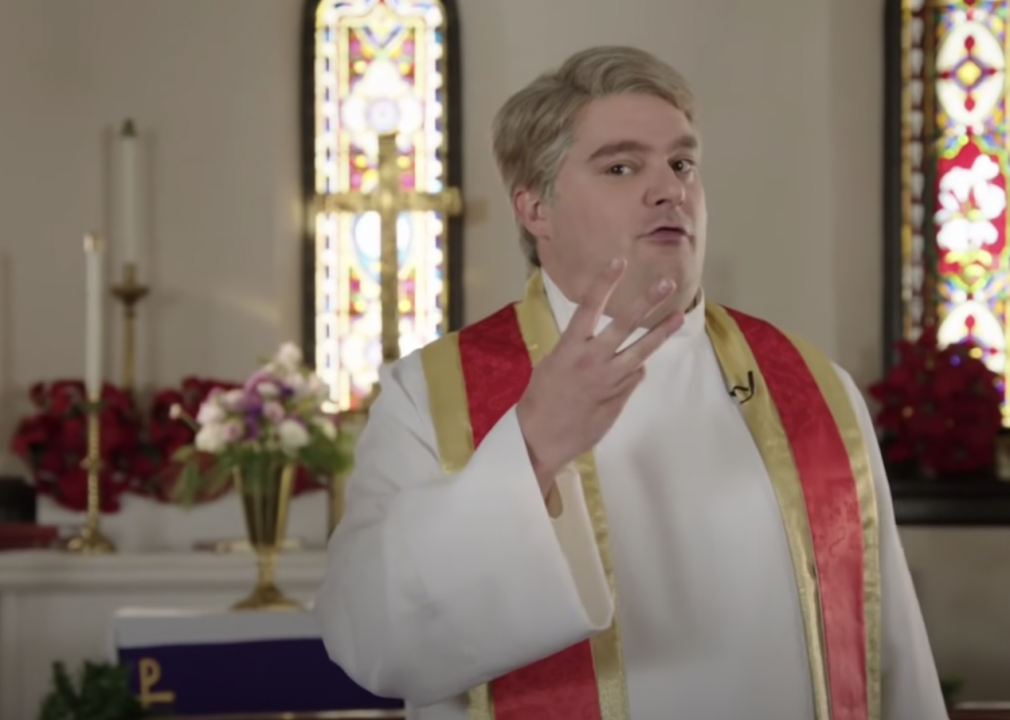 From the overly enthusiastic woman doing the reading to the sweaty-palmed man offering a sign of peace to the organist who never knows which chord to play, this skit speaks to anyone who’s ever attended Christmas Mass by showcasing all the parishioners encountered at St. Joseph’s. In this promo for the worst show you’ll ever attend, Pete Davidson plays Devin, a “newly atheist teen who is making a point of not saying the prayers,” and Bobby Moynihan plays Pastor Pat, whose house is connected to the church and who, “sings everything at constantly changing speeds.” 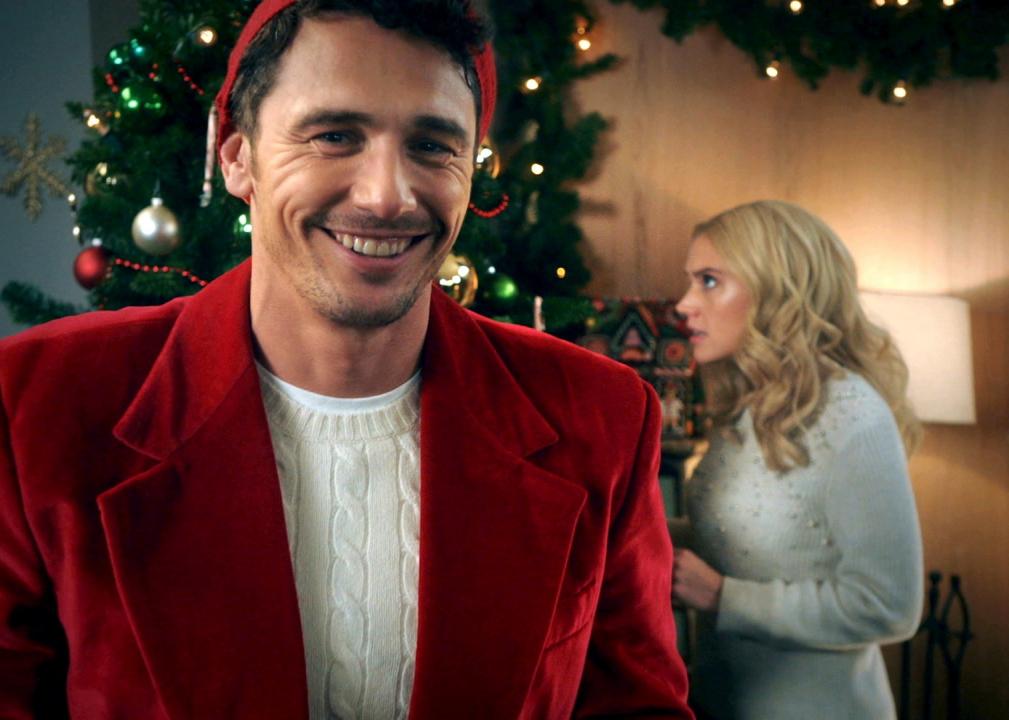 Hallmark Christmas movies have become a tradition all their own, and this “SNL” sketch spoofs their sappy plotlines with the help of James Franco, Heidi Gardner, and Kate McKinnon. Franco plays Chris Bearstick, a Canadian actor and Hallmark regular who appears in multiple films. The movies are all filmed in Canada, and one plotline includes someone getting “trapped in a snow globe.” 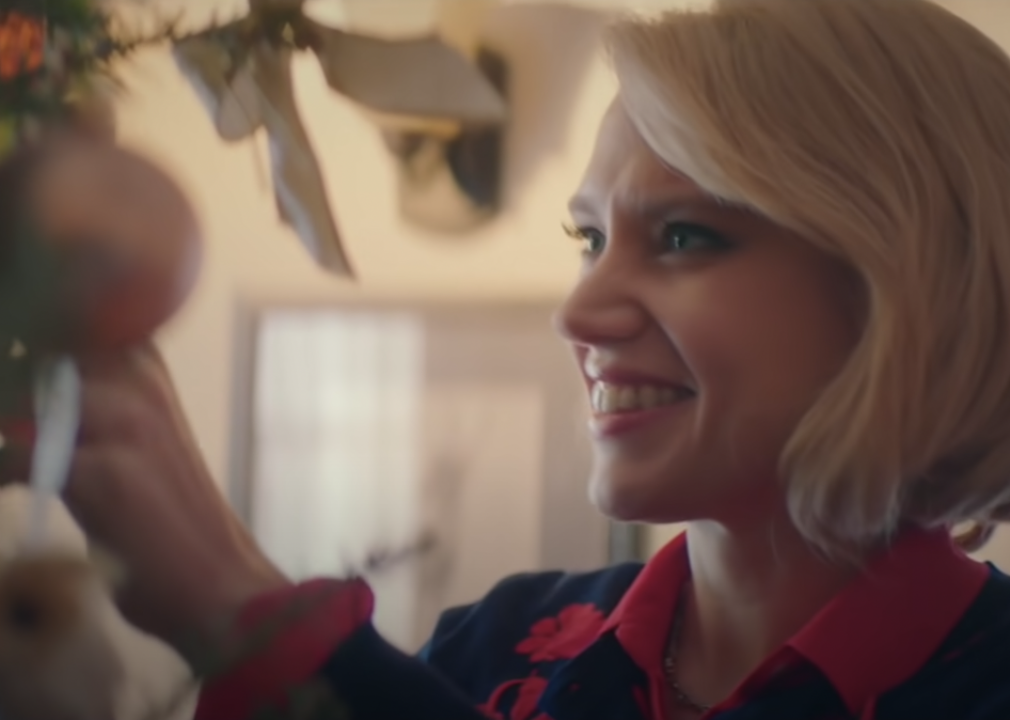 This commercial parody from season 43 features Kate McKinnon, Cecily Strong, and Aidy Bryant unwrapping gifts of charms based on the jewelry brand Pandora. The premise focuses on how much effort wives put into their husbands’ Christmas presents and how they little receive in return. “At Pandora charms,” the ad’s announcer boasts, “we take one little fact about your wife and turn it into jewelry.” Any singular detail, like what she does or that she wears dresses or “likes to drink,” can become a $60 charm and a Christmas gift she’ll never forget. 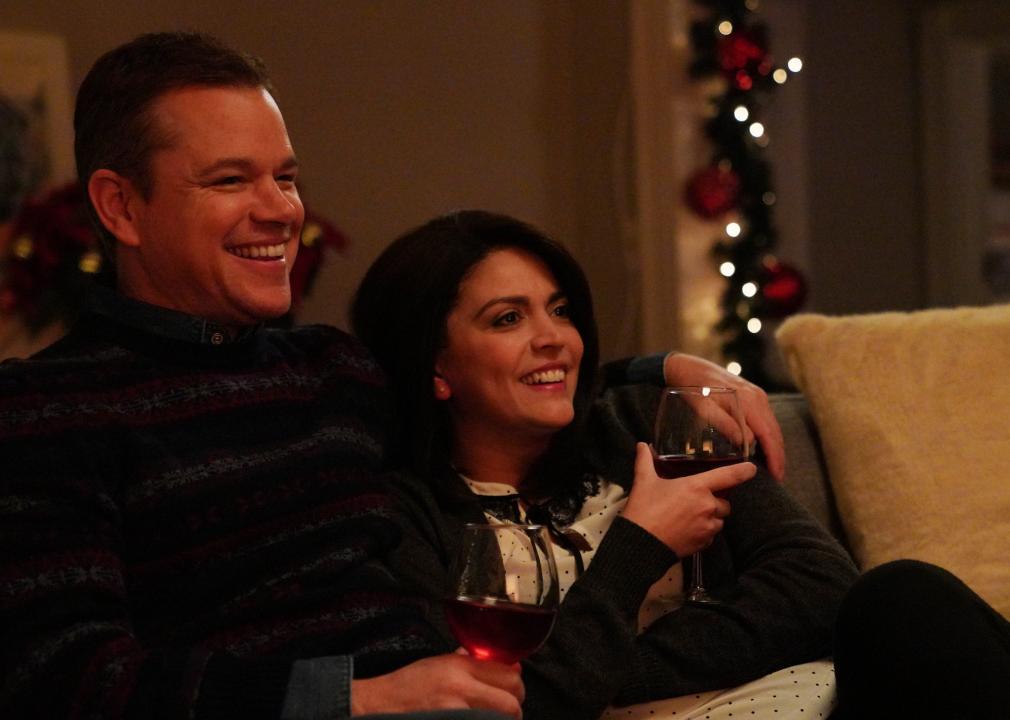 Matt Damon and Cicely Strong star in this 2018 skit about how amazing Christmas is, even when it isn’t. At the end of a long Christmas day, the suburban parents of three reflect on the magic of the day as they sip wine by a fire. The endless litany of family disagreements play in flashback and include a stressed Strong smoking a cigarette in the backyard, a disgruntled Damon swearing about a playhouse he stayed up late to construct, and a father-in-law with a flatulence problem. Every couple who has ever survived a holiday with kids and extended family knows, “Even when it’s the worst, it’s the best.” 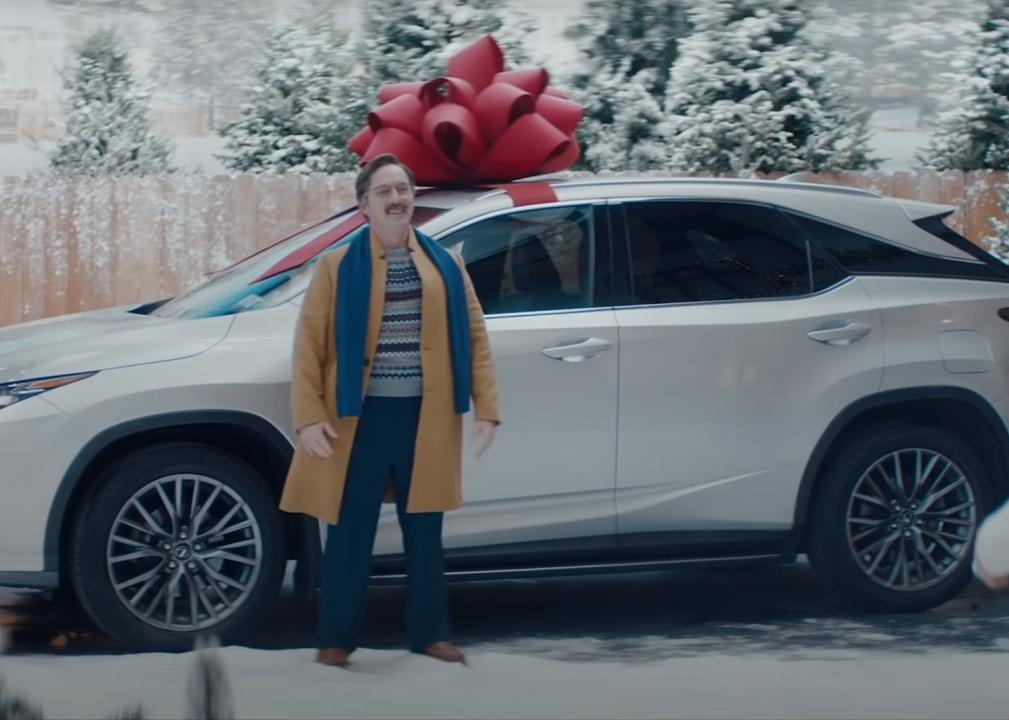 Not only does this clever twist on the Lexus “December to Remember” ads manage to poke fun at the idea of buying someone a luxury car for Christmas, but it also adds a timely element by mentioning how ridiculous that would be during the COVID-19 pandemic. The clueless husband and father, played by Beck Bennett, buys his wife a car without consulting her and has no idea it comes with a steep monthly payment. The wife and mom, played by Heidi Gardner, gives him a dose of tough love followed by some choice words when she not only spells out how foolish his purchase was but also reveals every single secret they’ve kept from their son. Timothée Chalamet, who hosts the episode, appears as the mortified son who learns his dad is trying to impress his girlfriend by getting an earring.

You may also like: 50 TV ads that made history