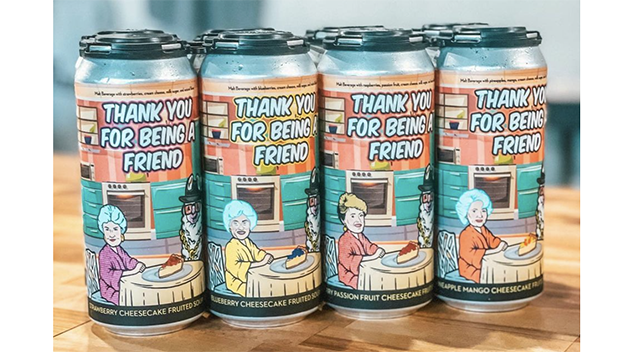 Are you a Dorothy, Blanche, Rose or Sophia?

Fly Llama Brewery in Biloxi is honoring the iconic characters from the “Golden Girls” TV show with a limited-release batch of cheesecake beers.

Owner and brew master David Reese, a self-described “huge fan” of the show, proposed creating a mixed four-pack, with a different beer for each of the four women who lead the show. Cheesecake is such a beloved motif on the 1980s sitcom that a 17-minute YouTube video titled “Best Cheesecake Moments on the Golden Girls” has over a million views.

“We all kind of laughed, thought it was just an insane idea,” Reese said. “The more I thought about it, the more I thought, why couldn’t we do it? Finally, we’re almost here.”

The four-pack will be released on Dec. 18, with a Christmas party at the brewery. The four cheesecake flavors are strawberry, blueberry, raspberry passionfruit and pineapple mango.

These beers represent Fly Llama’s first foray into cheesecake, but they’ve previously brewed king cake and carrot cake beers. A few other breweries around the U.S. are making cheesecake beers, but it’s not very common. Reese had never tried one until Fly Llama brewed it for the first time.

It took about nine months to get the flavors right, Reese said.

“We like to deconstruct flavors, and reconstruct,” he said. “What are the flavors you’re getting, and how can we build that back into a beer?”

Some experiments don’t quite work out. “Golden Girl” Blanche Devereaux was from Georgia, so Reese had hoped to create a peach beer in her honor. But he wasn’t happy with how the peach fermented, so instead she got raspberry passionfruit.

Reese plans to keep supplies of the beers limited. For one thing, production is complicated by a nationwide shortage of cream cheese.

“We kind of have found a niche with these cheesecake beers,” he said. “They won’t go away, but I want to keep them special.”