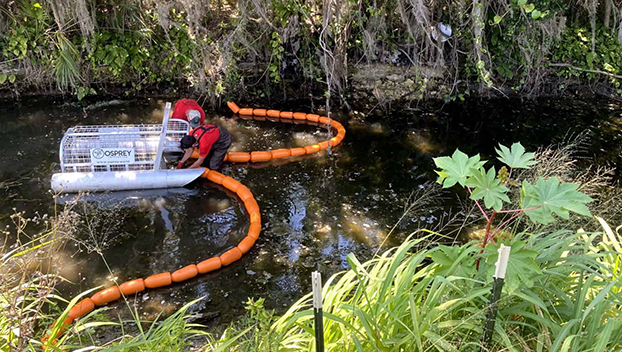 Mississippi is using BP oil spill money in a test to see whether floating trash traps placed in coastal waterways can make a big reduction in the amount of litter in the Mississippi Sound.

The Mississippi Department of Environmental Quality wants to learn “if these traps can substantially reduce the amount of litter which enters the Mississippi Sound from upland areas,” executive director Chris Wells said.

The $162,000, one-year pilot project is putting the litter collectors made in Alabama into three bayous and a canal in Mississippi’s three coastal counties, according to a news release sent Wednesday. The devices are anchored with floating booms that steer trash and natural debris into the traps, and which wildlife and boaters can go under or over.

Mississippi State University’s Coastal Research and Extension Center used a department grant to contract with Osprey Initiative of Mobile, Alabama, which makes the devices, a department spokesman said. Osprey also sets them out, maintains them and sorts the trash, recycling as much as possible.

This will also let Mississippi collect data on the types and sources of litter in the streams, Wells said.

The money was allocated under a law directing use of Clean Water Act fines collected from BP PLC and codefendants after the spill in 2010.

The traps, called “Litter Gitters,” will be placed at the southern branch of Magnolia Bayou in Hancock County, on Brickyard Bayou and Canal No. 1 in Harrison County, and in Jackson County on Bayou Chico.

“We look forward to the results of this project and perhaps the opportunity to expand the use of litter traps coastwide or maybe even statewide,” Wells said.