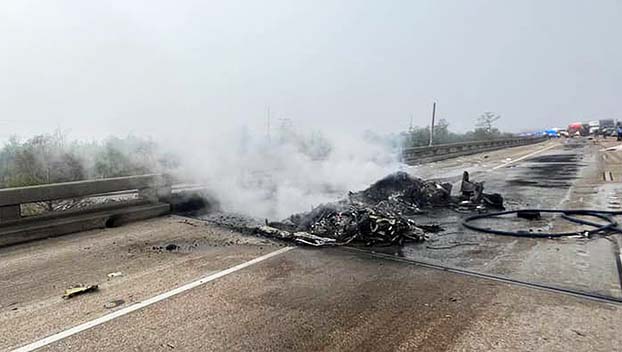 A helicopter crashed on Interstate 10 in Louisiana on Tuesday, shutting down traffic.

The pilot was killed in the crash.

The privately owned Bell 407 crashed on the Bonne Carre Spillway bridge about 12:30 p.m. on I-10 eastbound, according to Louisiana State Police, the Federal Aviation Administration and St. John the Baptist Parish Sheriff Mike Tregre.

Tregre said the copter may have crashed due to fog.

He said it did not appear that the helicopter was being used for law enforcement or medical transport.

Wreckage from the accident was seen floating in Lake Pontchartrain and was strewn on the bridge, the sheriff said. He said the FAA and National Transportation Safety Board are taking the lead in the investigation.

The crash closed I-10 eastbound and Interstate 55 southbound. Traffic from both was diverted to U.S. Hwy. 51.

Around the same time of the crash, around 20,000 people lost power in Kenner after the helicopter struck an electrical transmission line. It was restored about three hours later.