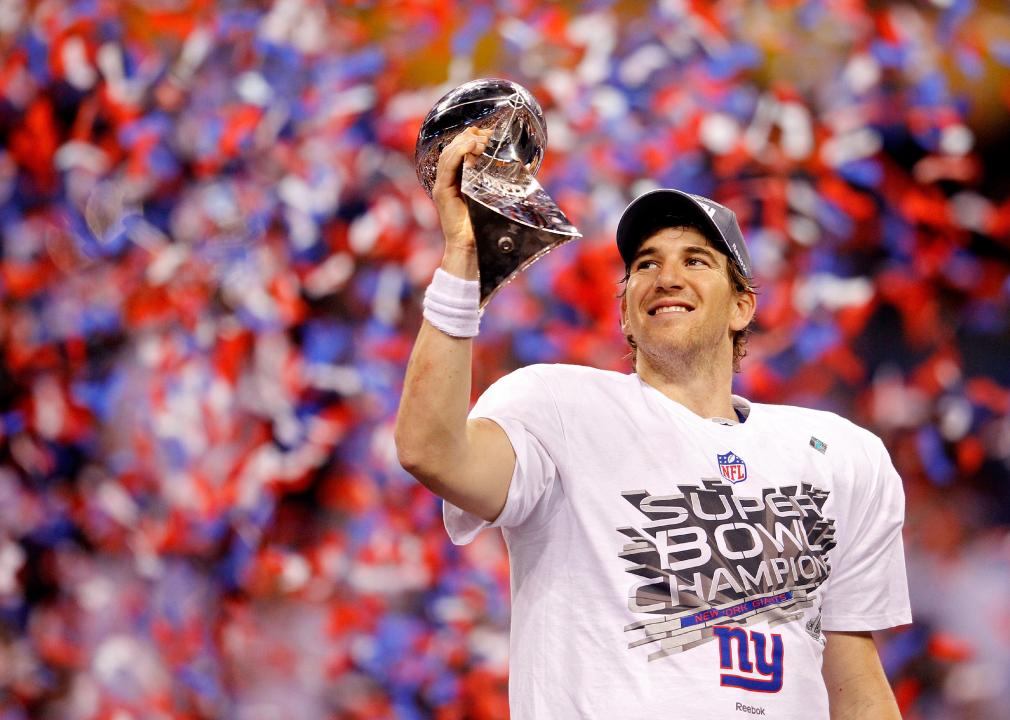 There are few time-honored traditions quite like the NFL’s big game. Every year, families and friends get together in early February to watch some football, laugh at new commercials, eat a ton of barbecue, and possibly bet on the Super Bowl winner.

The first Super Bowl ever played was in 1967, though at the time, the National Football League (NFL) champion played the American Football League (AFL) champion after the two leagues merged in 1966. The first game featured the Green Bay Packers and the Kansas City Chiefs, and the Packers won convincingly, 35-10. Since 1970, the game has been played between the champions of the American Football Conference (AFC) and the National Football Conference (NFC) of the NFL.

Since the sport’s inception, gamblers have placed bets on their favorite teams at the beginning of the season, hoping for a victory and a big payoff. Because of the intense betting interest, oddsmakers would typically analyze a team from the year before, take into account any offseason changes, and post a team’s chances of winning the whole enchilada before the season starts.

Depending on how the oddsmakers analyzed the teams, their chances could be anywhere from 2-1 favorites to 250-1 longshots. A 250-1 longshot means that if you placed a $1 bet on your team to win the Super Bowl at the beginning of the year, you could win $250.

Digging deep into NFL history, BestOdds decided to compile preseason odds from Pro-Football-Reference.com for every NFL season to determine which Super Bowl champs had the longest odds at the start of the season. Teams were then ranked by their odds, with ties left standing.

If you were lucky enough to make bets on any of the following longshot winners, you stood to make a lot of money. Here are the top-10 longest-odds winners in Super Bowl history. 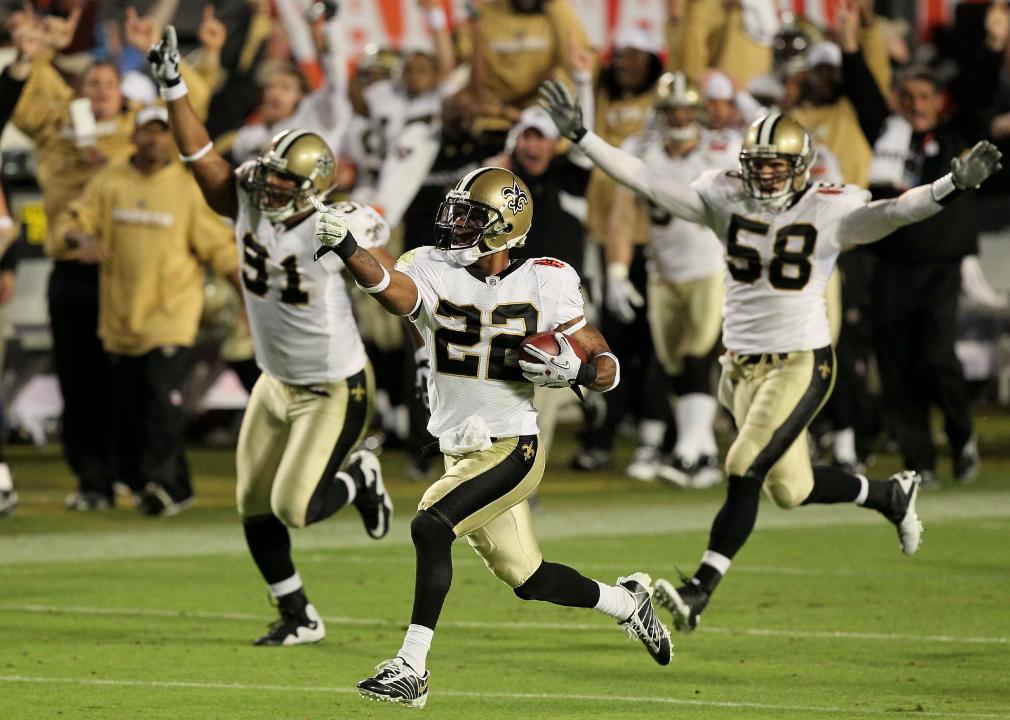 Coming into the 2009 NFL season, the New Orleans Saints were not given much consideration. The previous season, the Saints only managed to go 8-8, missing the playoffs altogether. But the Saints, led by quarterback Drew Brees, surprised the prognosticators by winning their first 13 games and setting team and league records for the longest undefeated start by an NFC team (at that time). Though they lost their last three games before the playoffs began, they still managed to squeak into the Super Bowl when the Minnesota Vikings blew multiple chances to win the NFC Championship game. The Super Bowl was against the Peyton Manning-led Indianapolis Colts, and the game was a nail-biter until Manning threw a fourth-quarter interception that led to a Saints touchdown and a 31-17 win. 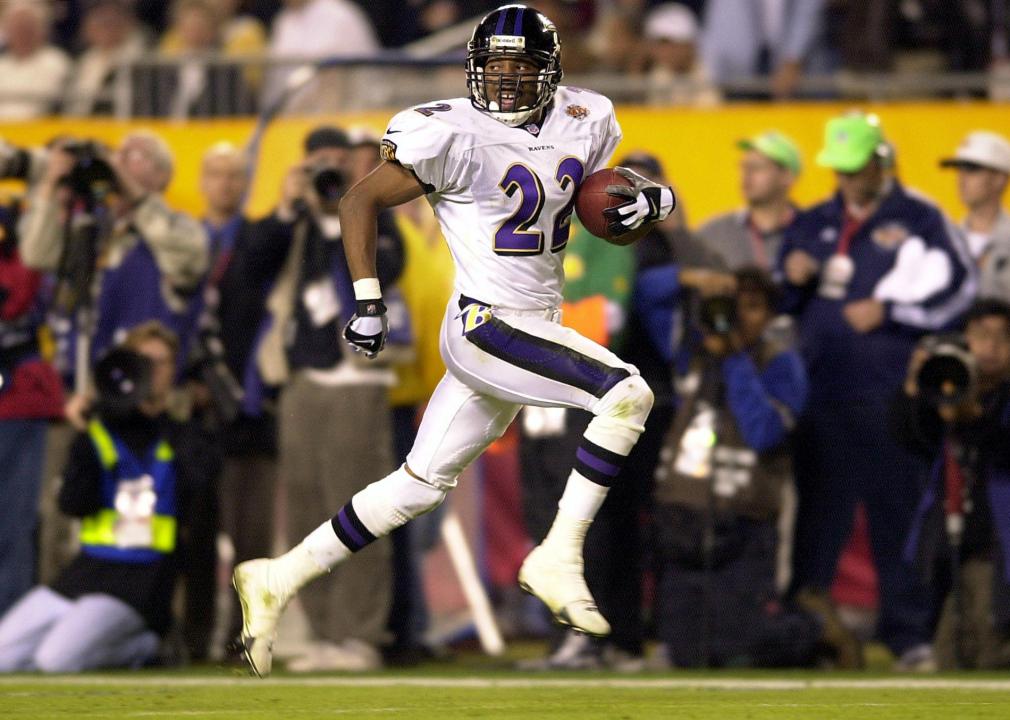 The Baltimore Ravens were notorious for their tough-nosed defense, but before the start of the 2000 season, the team’s star linebacker, Ray Lewis, was arrested and charged with murder. Needless to say, the odds were not in Baltimore’s favor to go all the way. But when Lewis testified against his codefendants in a plea deal, allowing him to play, the team was able to put distractions aside and take the league by storm. Other factors that led to the Ravens’ success were the off-season acquisitions of tight end Shannon Sharp and rookie running back Jamal Lewis. The Ravens rode their defensive intensity to a Super Bowl win over the New York Giants 34-7 in addition to multiple records including fewest rushing yards allowed in a season. 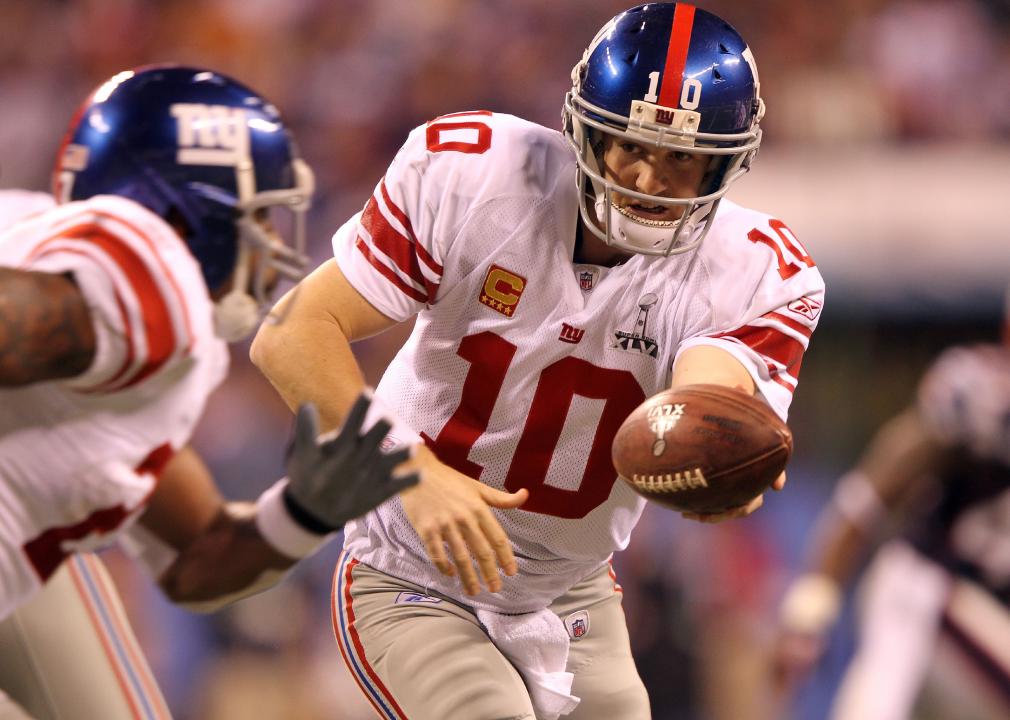 Not only were the New York Giants a longshot to win the Super Bowl in 2012, they barely even made the playoffs with a 9-7 record and had a negative point differential for the season. The Giants benefited from a particularly weak NFC East division as Philly and Dallas both went 8-8, and Washington went 5-11. Facing the Giants in the Super Bowl was the preseason odds favorite New England Patriots. Still stung by their 2008 Super Bowl defeat to the Giants, the Patriots, led by Tom Brady, were ready for revenge. But the Giants came out on top again, beating New England 21-17, and became the first Super Bowl champion to win fewer than 10 games during the regular season. 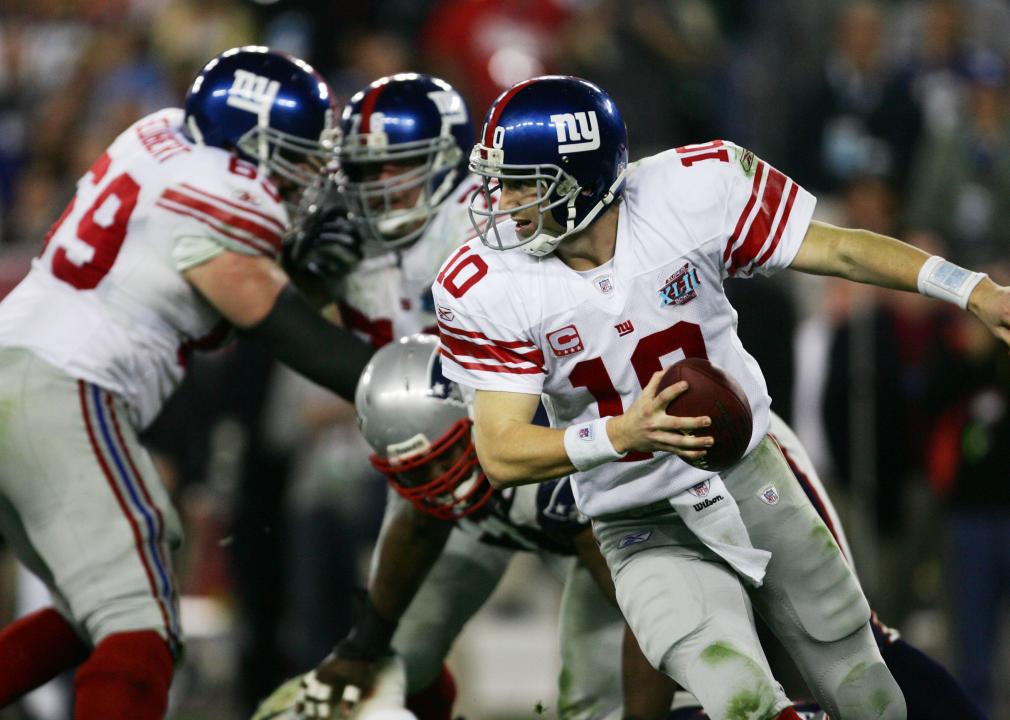 The 2007–08 season is memorable for many reasons. The preseason-favorite New England Patriots lived up to every expectation, notching an unprecedented 16-0 record during the regular season and destroying every team in their path en route to the Super Bowl. The New York Giants, on the other hand, had much less fanfare. They were a paltry 8-8 the year before, but they surprised the critics by squeaking into the Wild Card game and barely getting past the Cowboys and Packers for a Super Bowl title shot. The Super Bowl was actually a rematch of Week 17 when the Patriots narrowly beat the Giants. Sadly, for Patriots fans, the perfect season was foiled when Eli Manning led his team to a 17–14 win and played spoiler to the “almost” greatest team of all time. 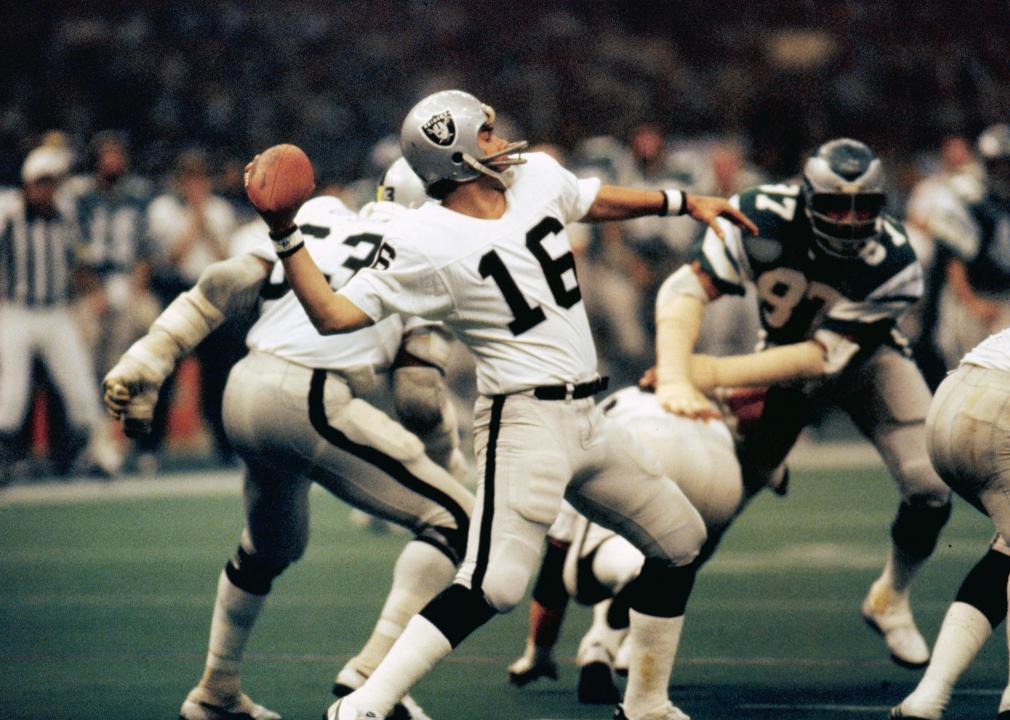 In 1979, the Oakland Raiders finished with their worst record in 16 years. In 1980, owner Al Davis announced he was going to move the team to Los Angeles. It wasn’t the best way to start a season. In spite of the distractions, the team finished second in the AFC West, which was just good enough to get into the playoffs. Once there, the Raiders ripped off three straight wins to get into a Super Bowl fight with the Philadelphia Eagles. The game was never in doubt, though, as the Raiders trounced the Eagles 27-10, and became the first Wild Card team to win a Super Bowl. 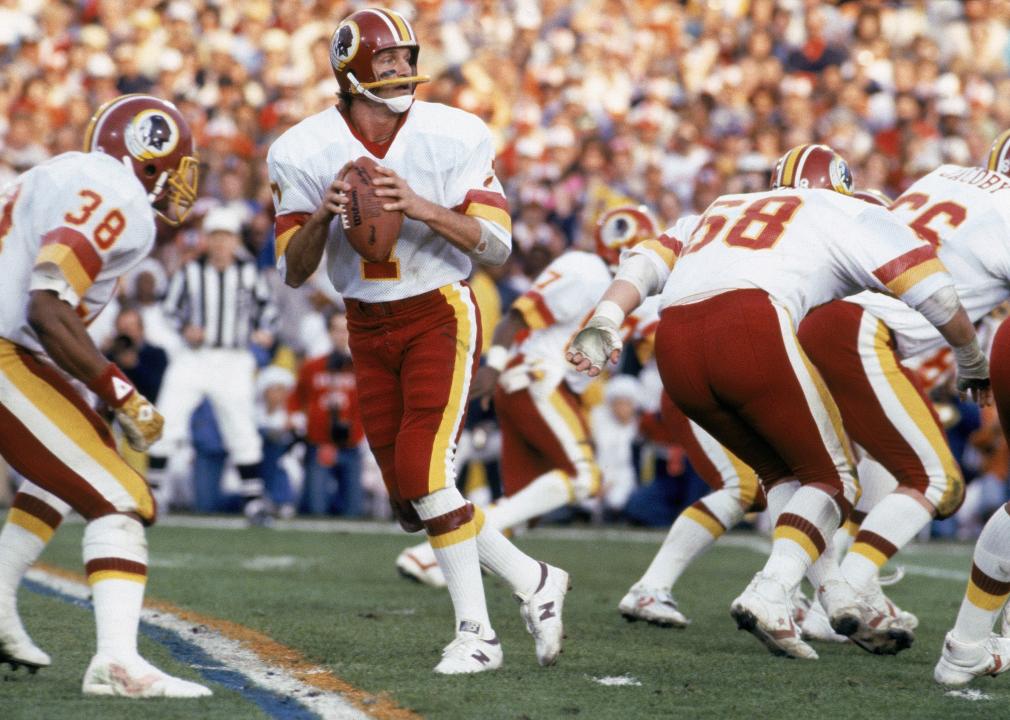 The 1982 NFL season was an anomaly because a players’ strike shortened the regular season to only nine games. Very few predicted the Washington Football Team (then named the Washington Redskins) to come out on top that year, especially since they only won eight games the year before and didn’t win a single game in the 1982 preseason. When it came time for the playoffs, the NFL changed its rules for the season and held a 16-team playoff featuring the top eight teams from each conference. Washington’s team unbelievably had the best record in the NFC, going 8-1 behind the lethal arm of Joe Theismann and the gritty running of John Riggins. The team played the Miami Dolphins in the Super Bowl and won 27-17 after scoring the final 17 points and shutting out the Dolphins in the second half. 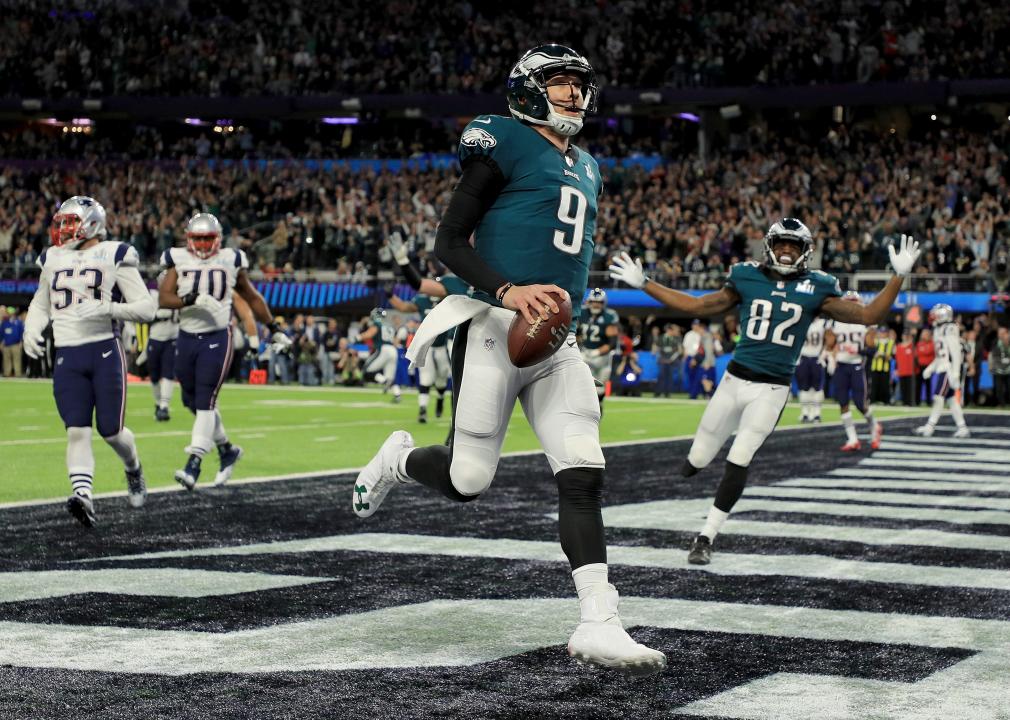 In 2016, the Philadelphia Eagles had a dismal season. They finished fourth in their division with a 7-9 record and didn’t come close to making the playoffs. But everything changed the following year when the Eagles won 10 of their first 11 games and finished the regular season 13-3. But then a major problem arose: The Eagles lost their starting quarterback, Carson Wentz, when he tore his ACL in Week 14. Backup quarterback Nick Foles filled in nicely though, taking the Eagles to the Super Bowl to face the defending Super Bowl champion New England Patriots. In the Big Game, Foles was brilliant, passing for 373 yards and three touchdowns for a 41-33 victory and a Super Bowl MVP trophy to boot. It was the Eagles’ first and only Super Bowl victory. 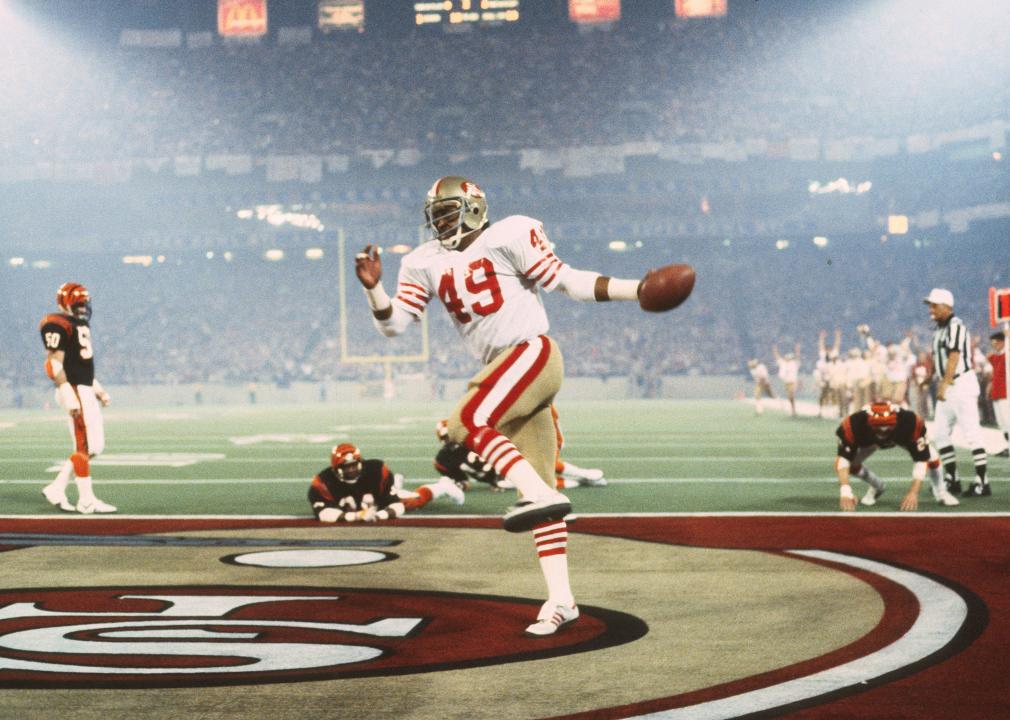 Little did anyone know that the 1981 San Francisco 49ers were on the verge of a dynasty. But two critical changes made all the difference. The previous year, the Niners went 6–10 and needed to shake things up. That’s when coach Bill Walsh moved future Hall of Fame quarterback Joe Montana to the starting lineup and drafted fellow future Hall of Fame cornerback Ronnie Lott to anchor the defense. The Niners went 13-3 during the regular season and beat the Dallas Cowboys in the NFC Championship game when Montana famously hit Dwight Clark in the endzone to win the game. The Niners wound up beating the Cincinnati Bengals in the Super Bowl, 26–21, to begin a dynastic run in which Montana led the team to four Super Bowl victories. 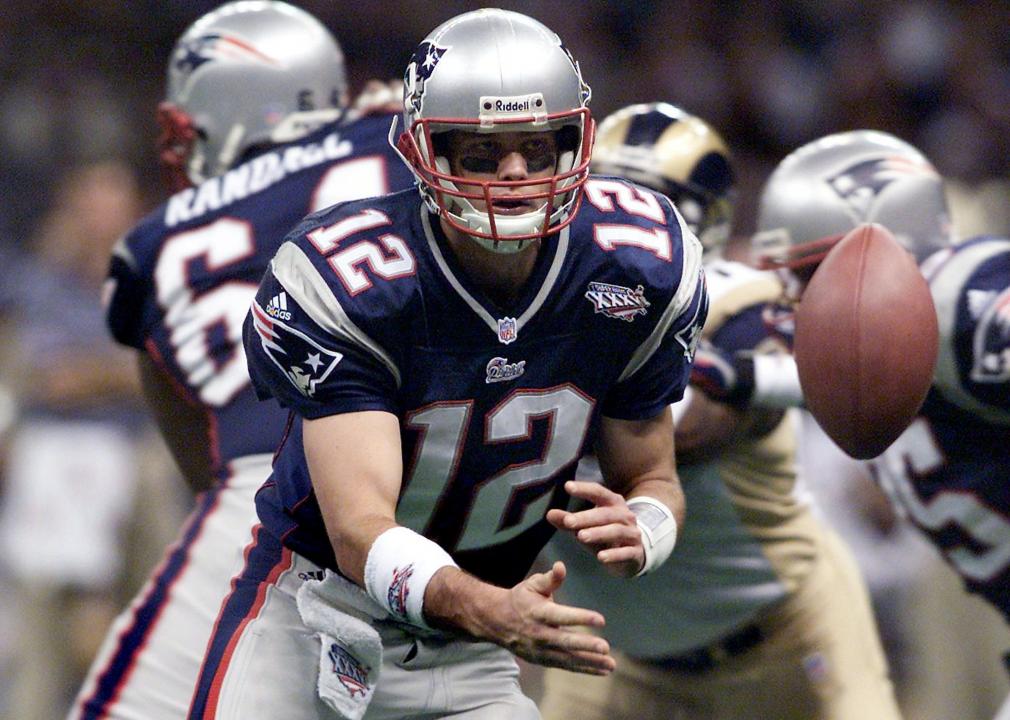 The year 2000 wasn’t kind to the New England Patriots. They finished the season 5-11 and missed the playoffs entirely. The silver lining, however, was that they drafted Tom Brady. Expectations were low for the team in 2001, but when starting quarterback Drew Bledsoe got hurt in the second game, Brady filled in and led the team to an 11-5 record, winning the AFC East division. The Patriots then beat the top-seeded Pittsburgh Steelers to advance to the Super Bowl where waiting for them was the preseason-favorite St. Louis Rams. The Super Bowl came down to the wire when Patriots’ kicker Adam Vinatieri nailed a last-second field goal to win the game, 20-17. The win was New England’s first, and the start of the Brady-led Patriots dynasty, which ironically ended (for now) with New England beating the LA Rams in the 2019 Super Bowl. 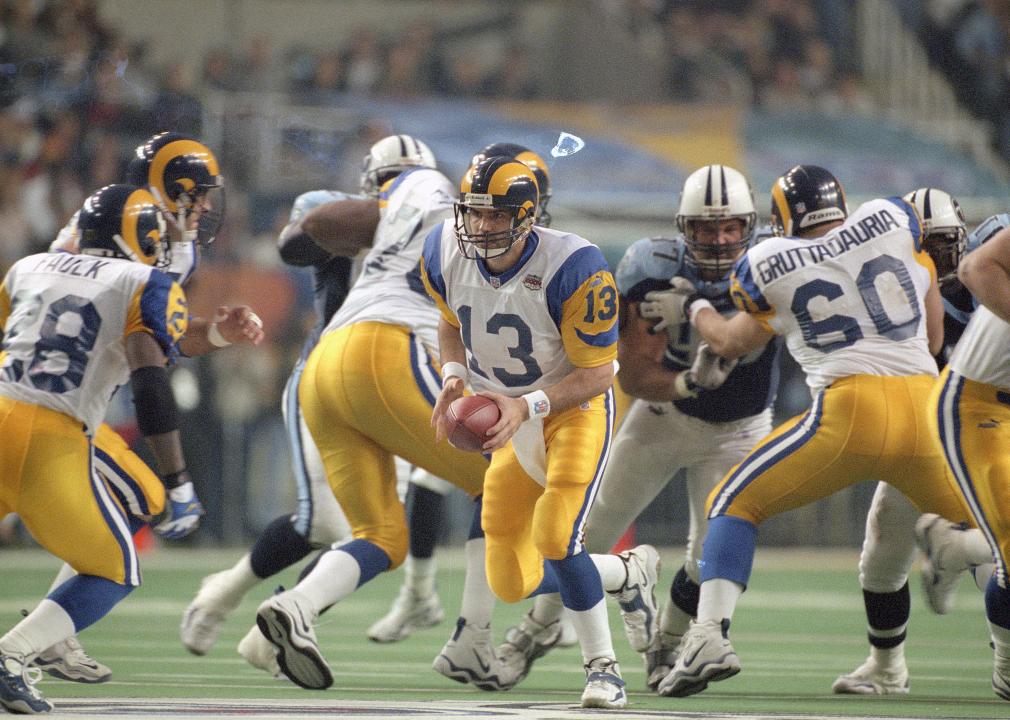 The 1999 St. Louis Rams were nicknamed the “Greatest Show on Turf” for their fast-paced, high-scoring offense, but no one saw it coming after finishing the previous season 4-12. The biggest change to the team was elevating journeyman Kurt Warner to starting quarterback. Warner was a relatively unknown player, but when he was given the reins to the Rams offense, the team exploded out of the gate. In his first season as a starter, Warner threw 41 touchdowns, was named the league MVP and led the Rams all the way to the Super Bowl. The final game was against the Tennessee Titans with the Rams winning 23–16 and Warner being named Super Bowl MVP. Warner is widely considered to be the greatest undrafted quarterback of all time and remains the only undrafted quarterback to lead his team to a Super Bowl victory.

50 Black actors who made entertainment history