‘If I had not had cancer, I never would have written the book’ Mississippi pastor writes book born out of weakness, pain 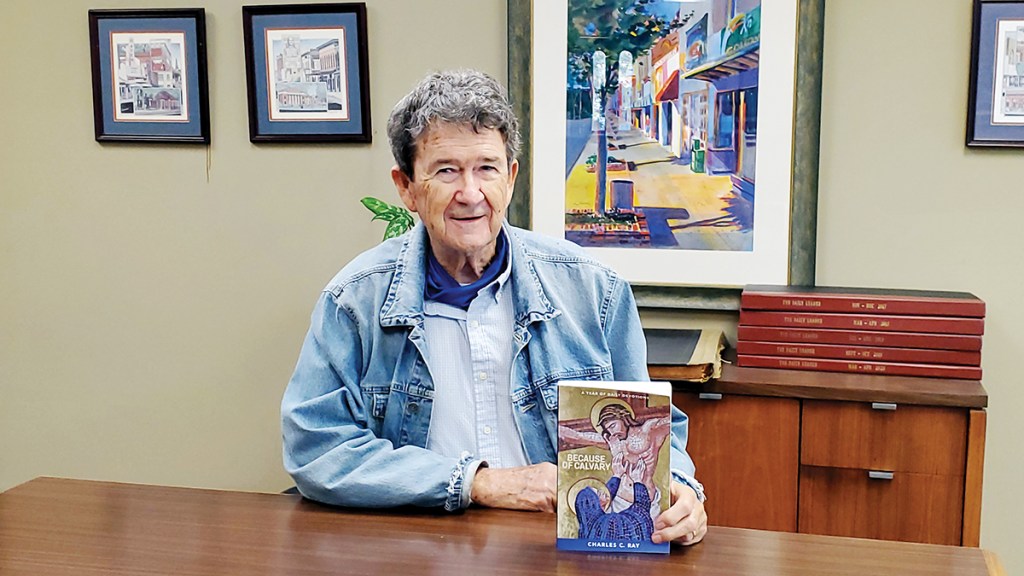 A Mississippi pastor has written a book born out of a “life or death situation.”

Charles C. Ray, of Brookhaven, has pastored a Presbyterian church in Magnolia for 20 years. A retired social worker, Ray has accomplished a lot in life, including starting the first hospice and mental health programs in Pike County. He and his wife, Carolyn — a retired school teacher, have lived in the Home Seekers Paradise for the past year.

At age 84, it has been four years since he went through chemotherapy for cancer. His book, “Because of Calvary: A Year of Daily Devotions,” was written over the course of 10 months.

The idea was born out of a place of weakness, pain and struggle. One morning, Ray awoke with a Scripture passage in his mind — 1 Corinthians 6:19 — “Do you not know that your body is the temple of the Holy Spirit who is in you, whom you have from God, and you are not your own?”

That Scripture got his attention — if his body belonged to God, then God would take care of him the way he needed.

“I believe in God, in the Bible, in the Trinity, so I turned over the cancer to God,” he said.

“I was at home, very weak. I was on oxygen and couldn’t get out,” Ray said. “I became very fascinated, disciplined, challenged and encouraged. I wrote every single day of that 10 months.”

The book follows a pattern, like many devotional books — a Scripture verse followed by comments from the author.

His writing followed a pattern, too.

“I would sit in my chair, read from the four versions of the Bible that I had, then pick one version that really spoke to me,” he said. “I’d write, then write more after lunch, then sometimes after dinner. Sometimes at midnight, I’d wake up and write a little more.”

He would write in longhand on legal pads the version of the verse he wanted to use, then add his own thoughts about it. But it was not really written for anyone else at first. It was all for himself, and God.

“It was a feeling of expressing back to God what he has given me over the years,” Ray said. “It was really written for myself and God. I wanted to express it when I was in a literal life and death situation.”

The pastor said he is proud in a good way about the book, available through Amazon. In addition to being an expression of his devotion to God, it is also dedicated to his wife.

“For Carolyn Ray  … I dedicate this body of work. She has been my best friend for 62 years and my wife for 55 years,” he wrote in the book’s dedication page. “My knowledge of the love of God is best explained and experienced in my relationship with Carolyn.”

“If I had not had cancer, I never would have written the book,” Ray said. “I’m hoping in reading this — the Scripture first of all and a common man’s explanation of what he feels and feels God has said to him — people will be challenged by it.”

The jet stream took a sharp turn, and the…