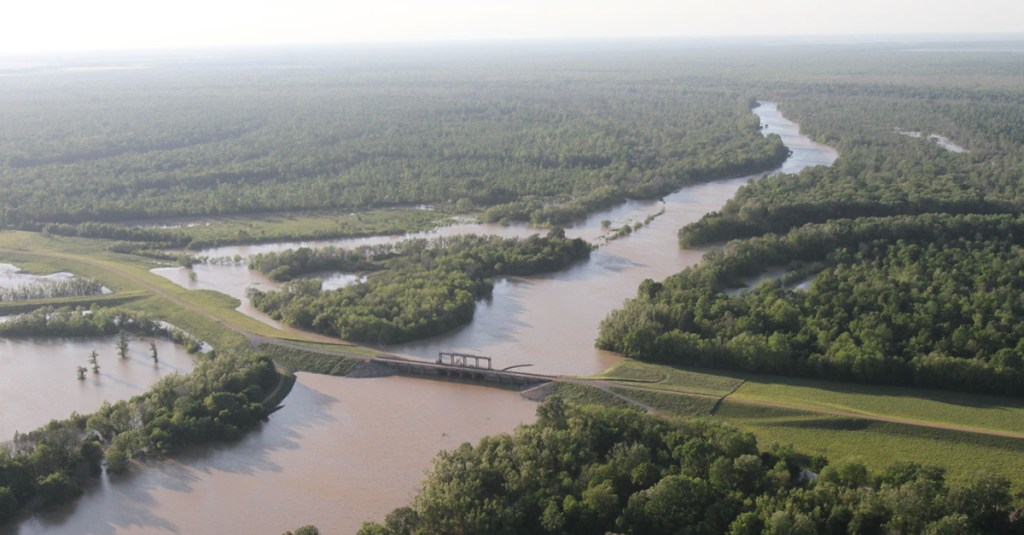 The Mississippi Levee Board today sent a letter to the Environmental Protection Agency (EPA) responding to the EPA’s Nov. 17, 2021 finding that the 2020 Proposed Plan for the Yazoo Pumps Project is prohibited by EPA’s 2008 Clean Water Act Section 404(c) Final Determination. In its correspondence, the Mississippi Levee Board, the local sponsor for the Yazoo Backwater Pumping Project, outlines the ways in which EPA’s reversed position is based on an erroneous determination that the 2020 Proposed Plan is the same as recommended Plan 5 described in the earlier U.S. Army Corps of Engineer’s 2007 Final Supplemental Environmental Impact Statement (FSEIS); EPA has the authority to change the defined area for discharge established by the Corps; and the “defined area” addressed by the 2008 Final Determination contains the entire 926,000-acre Yazoo Backwater Area.

The letter goes on to counter EPA’s fundamentally flawed explanations for its findings with key facts and evidence in the administrative record.

The letter in its entirety can be read below:

I am writing on behalf of the Board of Mississippi Levee Commissioners in response to Radhika Fox’s November 17, 2021 letter to The Honorable Jaime A. Pinkham, Acting Assistant Secretary of Army (Civil Works), and the accompanying analysis regarding the Yazoo Area Pump Project.

As you know, the Yazoo Area Pump Project is intended to alleviate the impacts of ongoing, devastating flooding in the Yazoo Backwater Area. Originally authorized by Congress in 1941, the Project has gone through numerous iterations and federal reviews. A number of roadblocks over the years, however, have prevented the completion of the project. Issues around funding for the Pumps stalled the project during the 1980s and 1990s. More recently, after preparation of a supplemental environmental impact statement in 2008, the EPA issued a veto under section 404(c) of the Clean Water Act (CWA), citing unreasonable adverse impacts to aquatic resources.

Of course, following EPA’s 2008 veto, flooding in the Yazoo Backwater Area continued to pose a serious threat to the social and economic welfare of the communities in the Yazoo Backwater Area.  The combination of more frequent and significant flooding, substantial environmental, economic, and safety concerns, and new and improved environmental and hydraulic data prompted the initiation of an updated evaluation of the Pump Project. As part of this updated evaluation, a number of changes were made to the project to reduce impacts, including the location of the pump station. In November 2020, EPA reviewed these changes and concluded that the updated proposal does not fall within the scope of, and is thus not prohibited by, the Agency’s 2008 veto. Since issuance of the Corps’ final ROD on January 15, 2021, $9.2 million has been appropriated by Congress for planning and construction of the pumps.

In the November 17, 2021 letter, EPA reverses course and concludes that the Corps’ new Proposed Plan for the Yazoo Area Pump Project, as described in the Final Supplemental Environmental Impact Statement (2020 FSEIS), is prohibited by EPA’s 2008 Clean Water Act Final Determination, which was issued on a similar but different proposal. This newfound conclusion is based on EPA’s erroneous determination that the 2020 Proposed Plan is the same as recommended Plan 5 described in the earlier Corps’ 2007 FSEIS, and that it involves discharges into the same defined area covered by the 2008 Final Determination. As explained below, EPA’s explanations for these findings are fundamentally flawed and run counter to key facts and evidence in the administrative record.

1. EPA does not have authority to change the “defined area” for discharge established by the Corps.

Section 404 of the Clean Water Act (CWA) and its implementing regulations vest the Corps—not EPA—with the authority to specify disposal sites, and to describe the location of those sites. See 33 U.S.C. § 1344(a)-(b); 40 CFR § 230.2(a).  In the case of the Yazoo Pumps Project, the Corps clearly defined the proposed disposal site—and geographical area in which they would be located—as “38 acres of forested wetlands and 5.6 acres of open water, including 0.9 acre of Cypress Lake.”  See Section 404(b)(1) Evaluation accompanying 2007 FSEIS.

This “defined area” may be subject to EPA’s § 404(c) veto authority, but § 404(c) does not allow EPA to change the “defined area” established by the Corps.  This is supported by 40 CFR § 231.1(a), which allows the EPA Administration to “exercise a veto…of a site…” (emphasis added).  Contrary to EPA’s assertions otherwise, the CWA does not provide EPA blanket veto power over vast geographical areas (e.g., 926,000 acres) that extend far beyond the specific area or areas the Corps has specified as a disposal site.

2. The “defined area” addressed by the 2008 Final Determination is not the entire 926,000-acre Yazoo Backwater Area.

In its November 17, 2021 letter, EPA concludes, based on its review of the 2007 FSEIS, that these “subject wetlands” were intended to mean 926,000 acres encompassing the Yazoo Backwater Area.  But this conclusion is arbitrary and capricious, and flatly inconsistent with both the 2007 FSEIS and the 2008 Final Determination.

First, the 2007 FSEIS was prepared pursuant to the National Environmental Policy Act and is intended to evaluate the potential environmental impacts of the proposed project.  It therefore looks at many areas beyond impacts to wetlands and other waters of the United States.  This means that the 2007 FSEIS’s discussion of the boundaries of the Yazoo Backwater Area and the “affected environment” are included for the purposes of NEPA and are not relevant to the scope of the 2008 Final Determination. EPA itself recognizes that the 2007 FSEIS includes descriptions of other areas, narrower in scope than 926,000 acres, yet provides no reasoned basis for relying only on the document’s general description of the Yazoo Backwater Area—an area that is never described in the 2007 FSEIS as “wetlands.” In fact, the relevant portion of the 2007 FSEIS is that document’s description of the “subject wetlands and other waters of the United States” requiring a § 404 permit.  The 2007 FSEIS clearly identifies these wetlands as “approximately 38 acres of mature bottom-land hardwood wetlands” and “5.6 acres of open water.” 2007 FSEIS at 4.

In addition, the Federal Register notice for the 2008 Final Determination makes clear that the “subject wetlands” are located only in Issaquena County, MS.  Specifically, the first line of that notice explicitly states: “This is a notice of EPA’s Final Determination pursuant to section 404(c) of the Clean Water Act to prohibit the specification of subject wetlands and other waters of the United States in Issaquena County, MS, as a disposal site for the discharge of dredged or fill material for the purpose of construction of the proposed Yazoo Backwater Area Pumps Project.” 73 Fed. Reg. 54398 (Sept. 19, 2008) (emphasis added).  Notably, this was a departure from EPA Region IV’s Recommended Determination that any final veto apply to wetlands in Humphreys, Issaquena, Sharkey, Warren, Washington, or Yazoo County (i.e., the entire Yazoo Backwater Area). See Final Determination at ii.

In justifying its determination that the “subject wetlands” are the entire Yazoo Backwater Area, EPA points to the 2008 Final Determination Response to Comment 10, which notes that other past 404(c) actions have applied to an entire project area, including those for Bayou Aux Carpes, Lake Alma, Henry Rem, Marion Becker, et al. and Senior Corporation, Russo Development and M.A. Norden Company.  But the scopes of those vetoes were significantly smaller than the Yazoo Backwater Area and applied to only specific wetlands at the project site (for example, the Bayou Aux veto applied to a “3000 acre wetland site”; the Lake Alma veto applied to “1155 acres of wetlands”; the Henry Rem veto applied to “wetland properties totaling 432 acres”; the Russo Development veto applied to “52.5 acres of existing, unauthorized fill in wetlands” and “an additional 5 acres of wetland”; the M.A. Norden veto applied to a “25-acre wetland site”). In no previous 404(c) action has EPA tried to designate the “defined area” as an entire geographic region greater than the size of Rhode Island. Such a move is unprecedented and beyond EPA’s authority under the Clean Water Act.

Moreover, the Final Determination states that “[w]hile this Final Determination prohibits the construction of FSEIS Plans 3 through 7, and Modified Plan 6, the data supporting this Final Determination indicates that derivatives of the prohibited projects that involve only small modifications to the operational features or location of these proposals would also likely result in unacceptable adverse effects and would generate a similar level of concern and review by EPA.”   If the “defined area” included the entire 926,000 acres, as EPA contends, that statement would not have been necessary as EPA would not have to undertake any additional review for modified projects.

Based on the foregoing, it is clear that the 2008 Final Determination was not intended to apply to the entire 926,000-acre Yazoo Backwater Area.

3. The Proposed Plan is substantively different from the prohibited Plan 5.

The 2008 Final Determination explicitly applies only to Plans 3 through 7, and Modified Plan 6.  In its November 17, 2021 letter, EPA concludes that the current Yazoo Pumps Project is the same as prohibited Plan 5.  To support this erroneous conclusion, EPA points to the similarities between the Corps’ 2020 Proposed Plan and 2007 FSEIS Plan 5. However, EPA fails to mention all of the significant differences between the two projects, including:

The Board of Mississippi Levee Commissioners is extremely dismayed by EPA’s reversal of position in this case, which will only serve to delay much-needed flood control relief in our community, 62 percent of whom are people of color and 28 percent of whom live below the poverty line.  As you know from your site visit,there is no project that better meets the goals of environmental justice, and without pumps, there is no relief from annual devastating flooding. While EPA has stated that it is committed to finding a path forward, the Agency’s actions—i.e., interpreting the 2008 Final Determination in a manner that effectively precludes any future pump project—indicate otherwise.  We urge EPA to reconsider and to work with the Corps to bring the Yazoo Pumps Project to fruition as soon as possible.