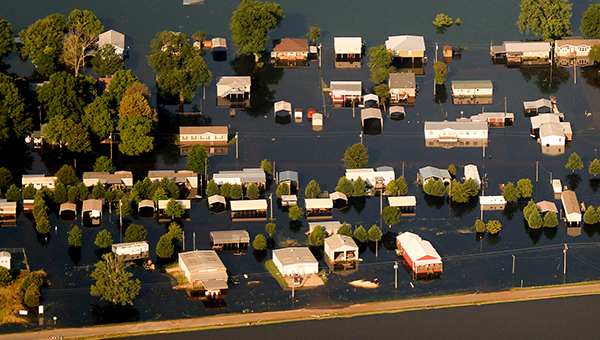 Homes in Eagle Lake are inundated by floodwaters in these aerial photographs captured Monday. Weather forecasts call for 3-to-6 inches of rain to fall in the area between late Wednesday and the weekend, likely raising the level of floodwaters in the area. (Walter Frazier | The Vicksburg Post)

The Corps of Engineers is not shutting down the pumps project, the commanding general of the Corps’ Mississippi Valley Division said.

An Associated Press article on Thursday said the Corps was canceling the project after The Environmental Protection Agency reversed an earlier decision on the project that had been green-lit in the final days of the Trump administration.

But Maj. Gen. Diana Holland, the commanding general of the Mississippi Valley Division, said the pumps project is not dead.

“The project has not been canceled by the Corps of Engineers and it is still authorized for construction by Congress,” she said. “However, the EPA recently concluded that their ‘2008 Section 404 ©’ determination applies to the latest proposed plan covered by the Record of Decision that I signed on Jan. 15, 2021.

“I simply withdrew that document until we are able to further work with EPA and other Federal, state and local stakeholders to address any outstanding concerns.

“The Corps remains deeply concerned about how flooding impacts the residents and the economy of the lower Mississippi Delta, including environmental justice issues affecting the population,” Holland said.

The pumps were the final piece of the Yazoo Backwater Levee Project authorized by Congress in 1941 and were part of the Mississippi Rivers and Tributaries Project. The Environmental Protection Agency, however, vetoed the pumps project in 2008.

The Corps in 2020 submitted a supplemental environmental impact statement proposing to install pumps in the Deer Creek area instead of at the Steele Bayou Control Structure that received the blessing of the EPA.

The EPA ruled in December 2020 the proposed project was not subject to its 2008 Final Determination, which vetoed a similar project.

The Corps of Engineers put its final approval on the Yazoo Backwater Pumps Project, publishing its Record of Decision on Jan. 15, 2020.

The Record of Decision detailed the Corps’ decisions on the issues discussed in the final supplement to the 1982 Yazoo Area Pump Project Final Environmental Impact Statement, which was published in the Federal Register in December 2020.

Holland signed the Record of Decision.

The pumps were the subject of a lawsuit filed by American Rivers, National Audubon Society, Sierra Club and Healthy Gulf, that was filed in federal court in Washington, D.C., in July 2020 against the Corps and U.S. Fish and Wildlife Service. The suit has been dropped.

Peter Nimrod, the chief engineer for the Mississippi Levee Board, echoed Holland’s comments.

“Since the EPA has vetoed it once again, they had to withdraw ROD (record of decision), because there was really nothing they could do with it,” Nimrod said. “It’s strictly because of what the EPA actions were, plus the Corps was in the middle of litigation with American Rivers and all those other environmental groups and the only way to stop the litigation was to withdraw the ROD.

“We haven’t given up on the project all, we’re going to give it a go again and we think that common sense, design and the facts will be on our side and in the future, we will get those pumps,” he said.

“We’re just disappointed with the EPA. We’re very frustrated with them. We’re tired of the EPA; they don’t play right. We’re not giving up. It’s going to happen one day; it’s just going to take a little more time.”

Woman accused of killing boyfriend back in jail; Mississippi…