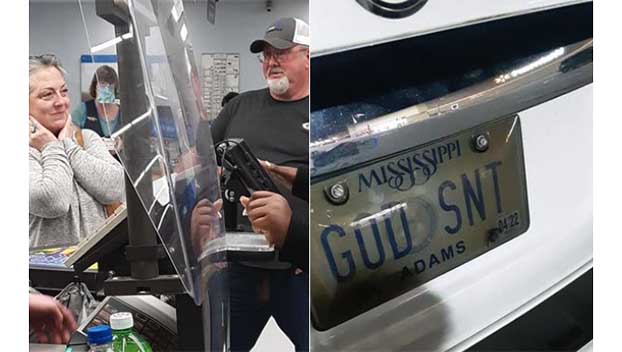 A Mississippi woman, whose hands can be seen at the right of one of the above images, shocked shoppers in line at a Texas Walmart when she paid for a stranger's Christmas gifts. (Image courtesy Ben Hendley, Facebook)

A Mississippi woman’s Christmas generosity was quickly becoming viral on social media Sunday after she shared her blessings with others in the checkout line at a Texas Walmart.

The story was shared online by a Texas man, Ben Hendley, who was also in the checkout line at a Walmart in Canton, Texas, when he saw the Christmas spirit take ahold of Joyce Hargrave Felton, of Natchez, Mississippi.

Hendley recorded the moment, though he didn’t get a clear picture of Felton, he shot a photo of her car tag that reads “GOD SNT” from Adams County, Mississippi, and shared the story on Facebook. People who knew Felton quickly recognized the tag and knew her usual generosity and identified her as the angel in the checkout.

“… This couple (passing through from Fort Worth, Texas) are trying to get their kid’s presents as they travel to their family get together (they live 2 hours away),” Hendley wrote. “And his card gets declined. Again. And again.”

“… The lady in front of me (from Mississippi) says, ‘You know what? It’s Christmas! I’ll pay for it!'” Hendley wrote.

After some back and forth over the value, the woman, later identified as Felton, reassured the couple.

“‘But it’s more than …'” Hendley wrote that the woman said.

“‘I don’t care. I’m going to bless you like God’s blessed me,'” Felton reportedly said.

Hendley said he followed Felton out to the parking lot and took a picture of her license plate the words on which confirmed his own suspicion.

“Look at her license plate,” Hendley wrote. “There ARE good people in this world!”