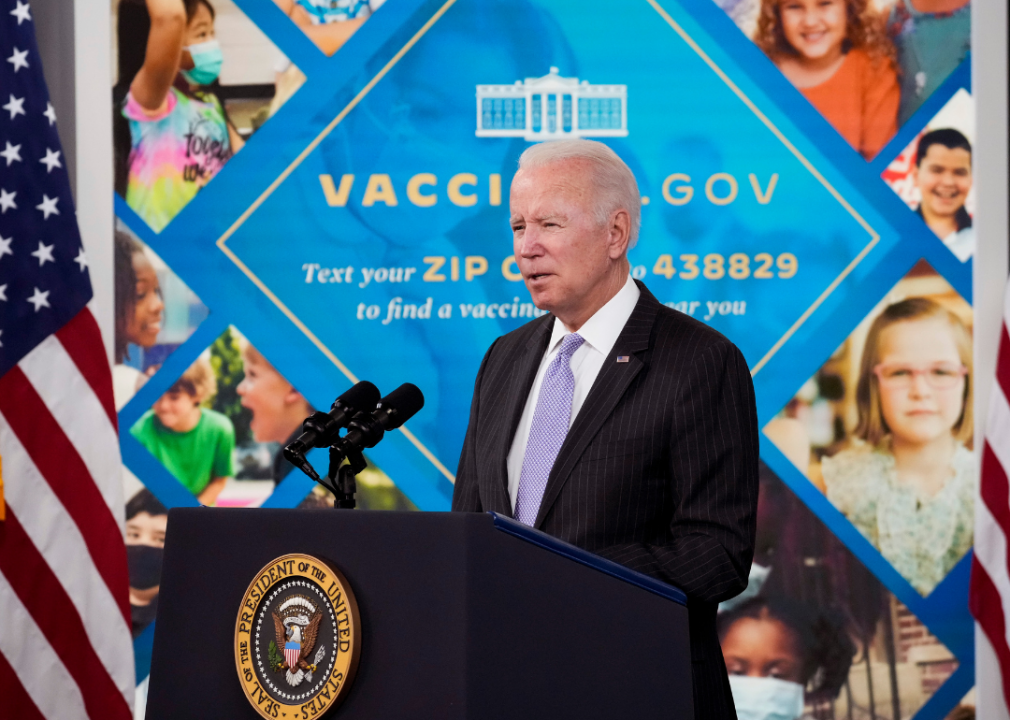 Trust in both national and local media splits along the familiar fault line of partisanship, and regardless of what side you find yourself on, that’s dangerous. When mistrust is spread by tech companies, politicians, or news organizations themselves, those stories that most urgently need telling go unheard. According to Pew, Americans are the most divided they’ve been over the last five years when it comes to trust in news organizations, with a gap of 43 percentage points between Democrats—who are more trusting of the news—and Republicans.

This is all the more interesting when one considers the major events that made headlines this year. From insurrection and the COVID-19 pandemic to mental health and humanity’s step toward space travel, these are all things that impact us as a nation, or simply as humans with a shared reality. And yet, partisan divides persist in the coverage of these topics.

Despite ideological splits, good, bad, and neutral news breaks each day, and 2021 was replete with high-impact headlines. Stacker referenced news coverage from a wide array of publishers from around the world to highlight 10 of the most impactful stories from 2021. This is not a ranking of importance, nor is it an exhaustive list of the newsworthy events that happened, but rather a snapshot of another unprecedented year.

You may also like: Most and least popular governors in America 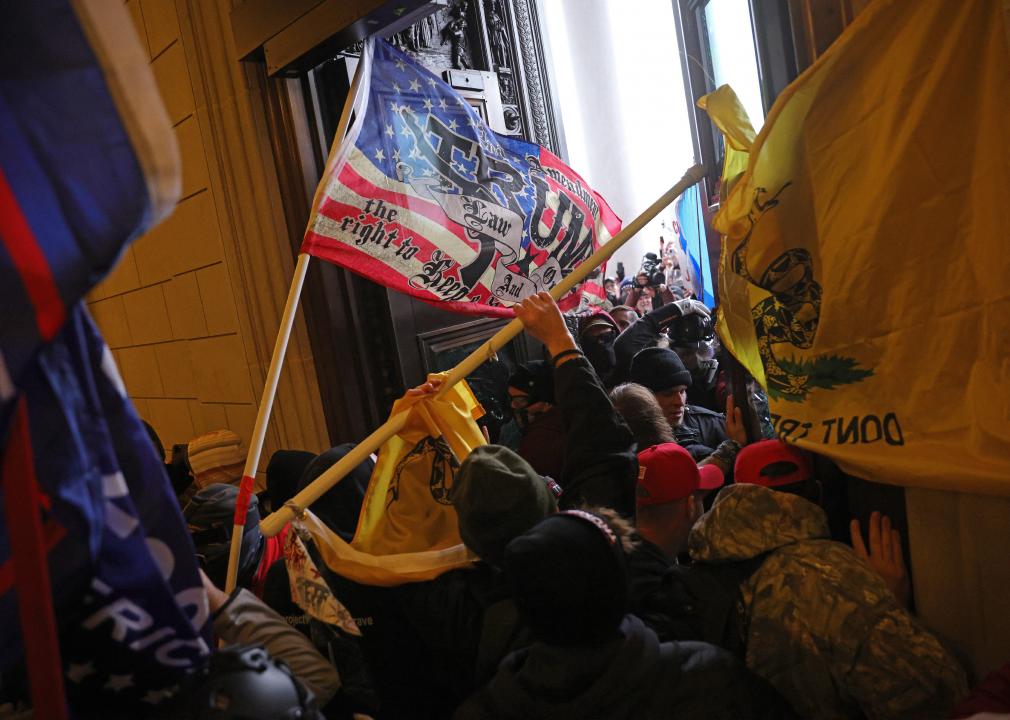 The US Capitol riots

On January 6, as Congress convened to certify Joe Biden’s electoral victory, hundreds of protesters who were in D.C. for the “Save America” rally violently breached the U.S. Capitol building, making it as far as the Senate chamber, killing one Capitol police officer, and injuring more than 140 others. The insurrectionists, comprised largely of pro-Trump supporters, caused roughly $1.5 million in damages. Instead of encouraging a peaceful transfer of power—a fundamental tenet of American democracy—President Donald Trump stoked the flames of insurrection with rhetoric about the election being fraudulent, stolen, and called on supporters to take action.

Since then: On January 13, with one week remaining in his term, Trump was impeached— for an unprecedented second time—for “incitement of insurrection.” More than 700 people involved in the riots have been charged with various crimes so far. While it is often reported that five people died that day, not all five died within the walls of the Capitol as a result of the riot. 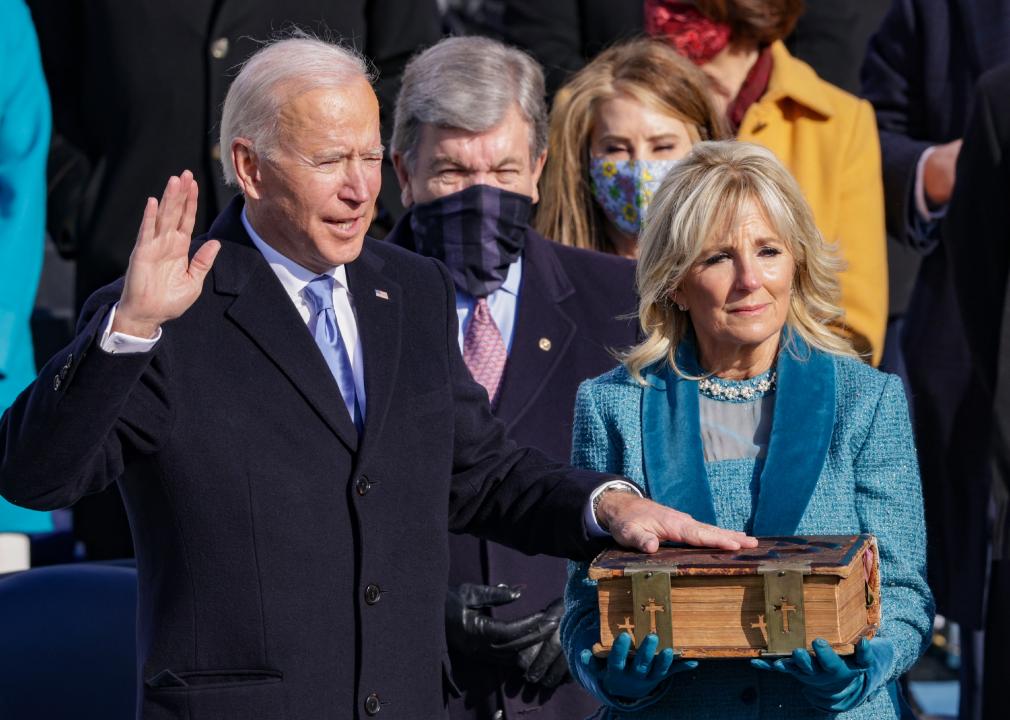 The inauguration of President Joe Biden on January 20 marked a transition in executive branch rhetoric from “America First” to “America is Back.” The legitimacy of Biden’s victory with 306 electoral votes was questioned by former President Donald Trump and his supporters, with unsubstantiated claims of voter fraud used as a rallying cry for the Capitol insurrection one week prior. This particular inauguration was historic not only because a transition of power was achieved despite efforts to subvert this democratic norm, but also because Kamala Harris became the first woman and first person of African American and South Asian descent to serve in the role of vice president of the United States.

Since then: President Biden’s approval rating, at nearly 44% in mid-December, is among the lowest of any polling-era presidents’ at this point during their term, second only to Trump, according to FiveThirtyEight. But his downward trend is not unusual for a president’s first year in office. Biden’s perceived inattention to the economy and his handling of foreign policies, namely America’s chaotic withdrawal from Afghanistan, are just some of the factors contributing to bipartisan disapproval. 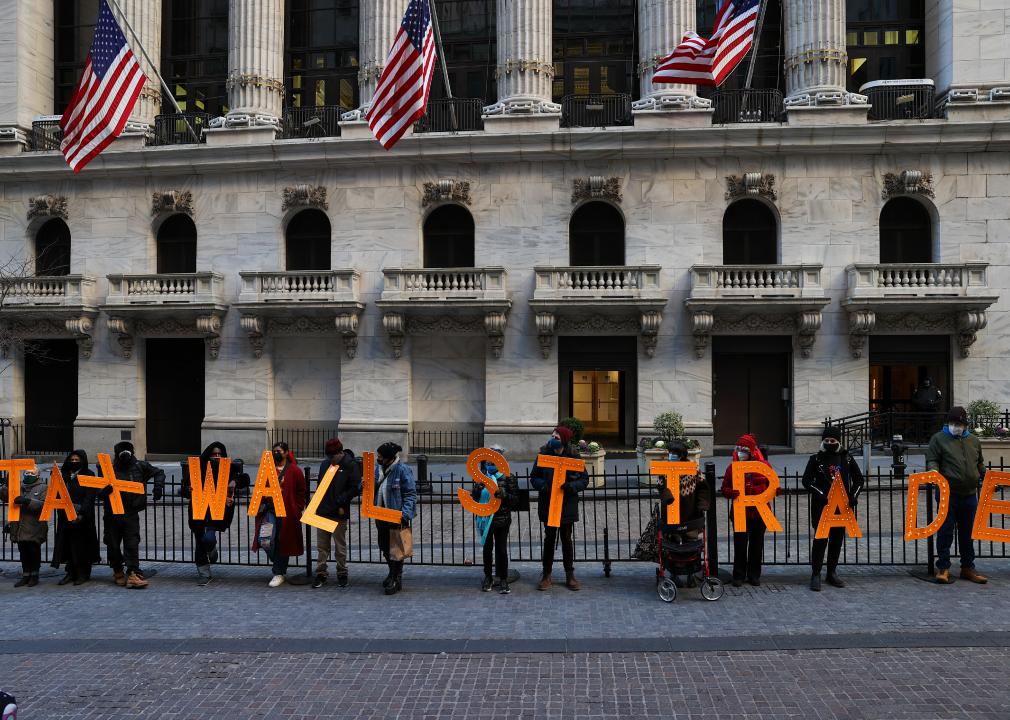 In January, followers of the subreddit r/wallstreetbets effectively brought Wall Street to its knees by forcing the short squeeze of GameStop stock. In just six months, the company’s stock prices went from hovering around $5 to nearly $350 at its peak. In the days immediately following that peak, it was estimated that short sellers lost $26 billion in the squeeze.

Since then: Investment app Robinhood found itself at the center of controversy when it halted the trading of GameStop stock on the app on January 28. A lawsuit was immediately filed against the company for preventing users from investing in the open stock market. The average GameStop stock price over the last year is $165.52. And yes, a movie (or two) is already in development. 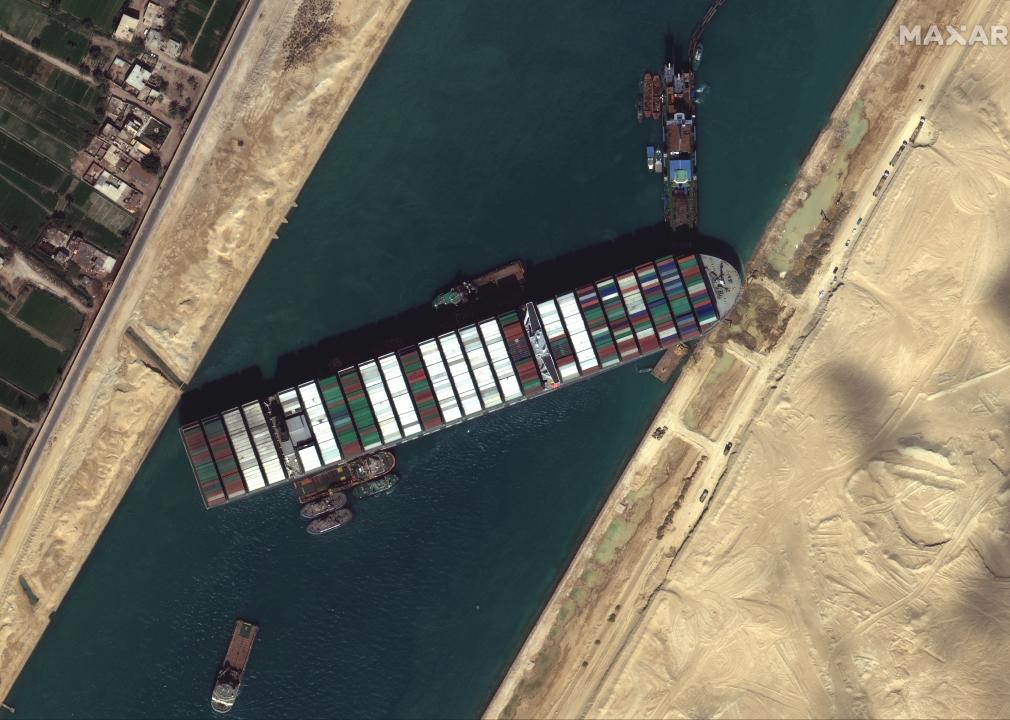 Ever Given halts global supply chain

Ever Given, a massive cargo ship carrying more than 18,000 containers of consumer goods, ran aground in the Suez Canal on March 23. For six days, the vessel blocked the passage of more than 400 other ships, stalling an already-tenuous global supply chain. Experts have estimated that the ripple effect was 60-day shipping delays for roughly $60 billion worth of products. It also shone a light on the outdated infrastructure of freight shipping.

Since then: Although Ever Given was freed from the canal six days later on March 29, it was seized by the Suez Canal Authority and held for more than 100 days as compensation negotiations ensued. The sum demanded by the Canal Authority was initially $900 million, but later lowered to $550 million. Ever Given’s owners, insurers, and Egyptian authorities reached a settlement on July 7, the terms of which were not disclosed. 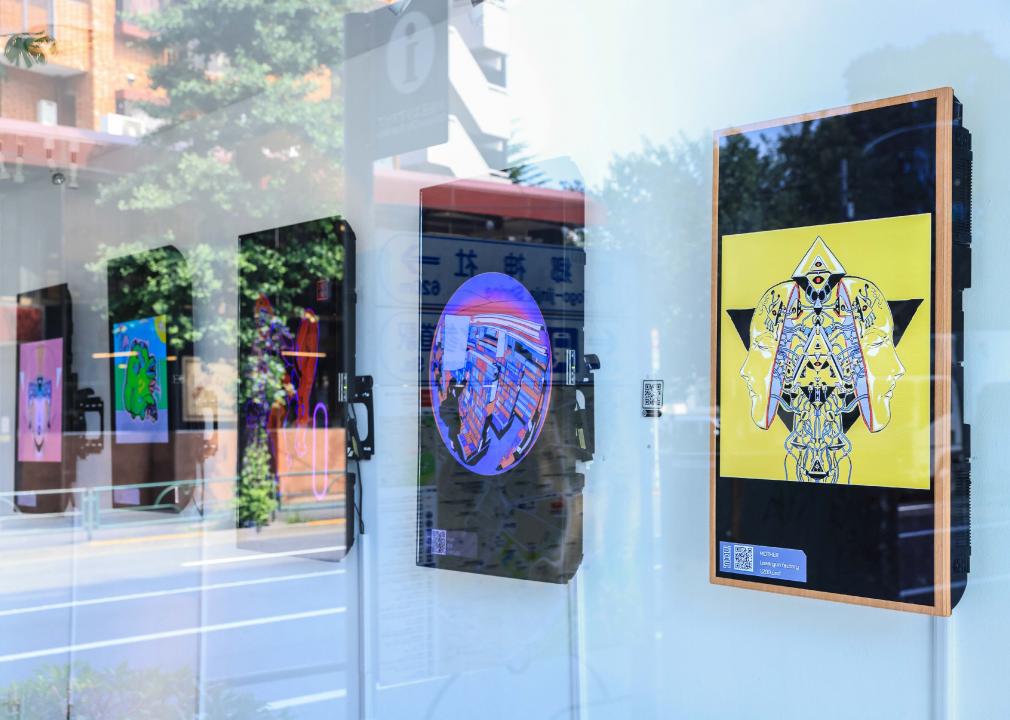 The rise of NFTs

The exact date that non-fungible tokens, or NFTs, were introduced to the world is not consistently reported, and as such is up for debate. But 2021 can be credited as their most culturally important year to date. On March 13, Christie’s sold the first NFT artwork—“Everydays: the First 5,000 Days” by artist Beeple—for $69 million. Building on the blockchain revolution, the sale represents a significant shift in the way people create, purchase, and authenticate digital art.

Since then: Countless pieces of digital art and even real world items have been turned into NFTs. Some examples include the Nyan Cat GIF, Twitter founder Jack Dorsey’s first tweet, and Nike sneakers.

You may also like: How America has changed since the first Census in 1790 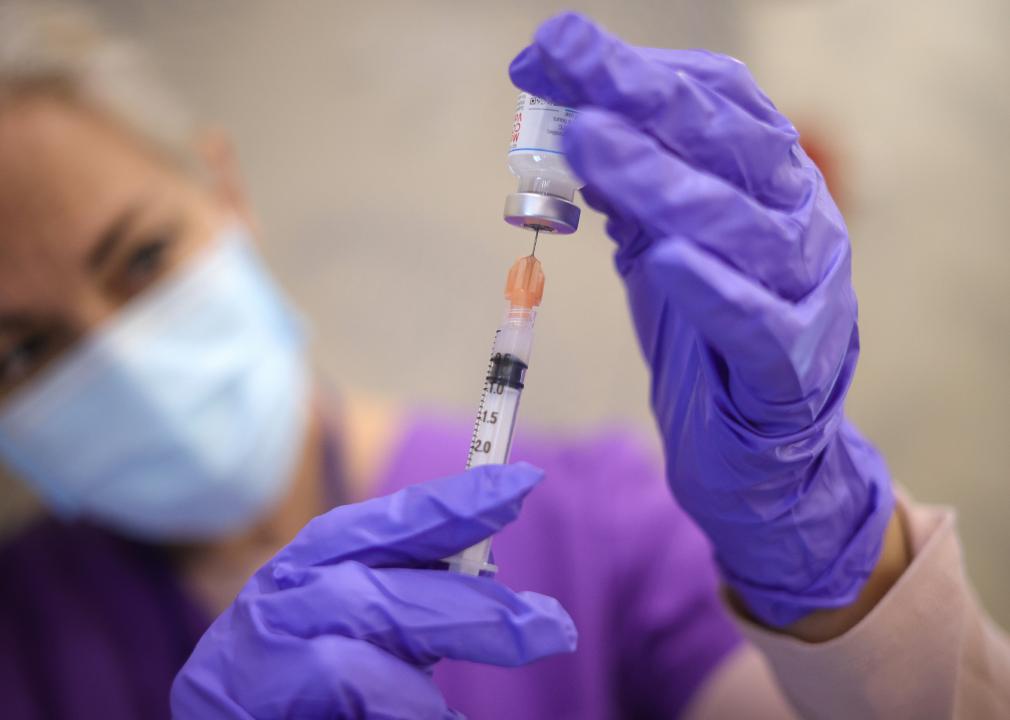 COVID-19 vaccines available to all

By May 1, a year and a half into the COVID-19 pandemic, adults in the U.S. across all 50 states were eligible to receive a Pfizer, Moderna, or Johnson & Johnson vaccination. Both Pfizer and Moderna use a novel mRNA technology to create their vaccines, while Johnson & Johnson’s vaccine uses more traditional, pre-existing information-delivery technology. It was a milestone met by the American public with hope, relief, and, for many, hesitancy. With the introduction of these vaccines and reported cases on the decline, America, and many other parts of the world reopened their economies.

Since then: In the month following the vaccination rollout in the U.S., coronavirus cases hit their lowest rates in over a year. But by July, cases began soaring due to the high transmissibility of the Delta variant. The U.S. has the second-highest vaccine hesitancy rates among 15 wealthy countries polled by Morning Consult, with 28% of people reporting they are unwilling or uncertain when asked if they would receive a vaccine. Roughly 61% of the population is fully vaccinated, falling behind 60 other countries. 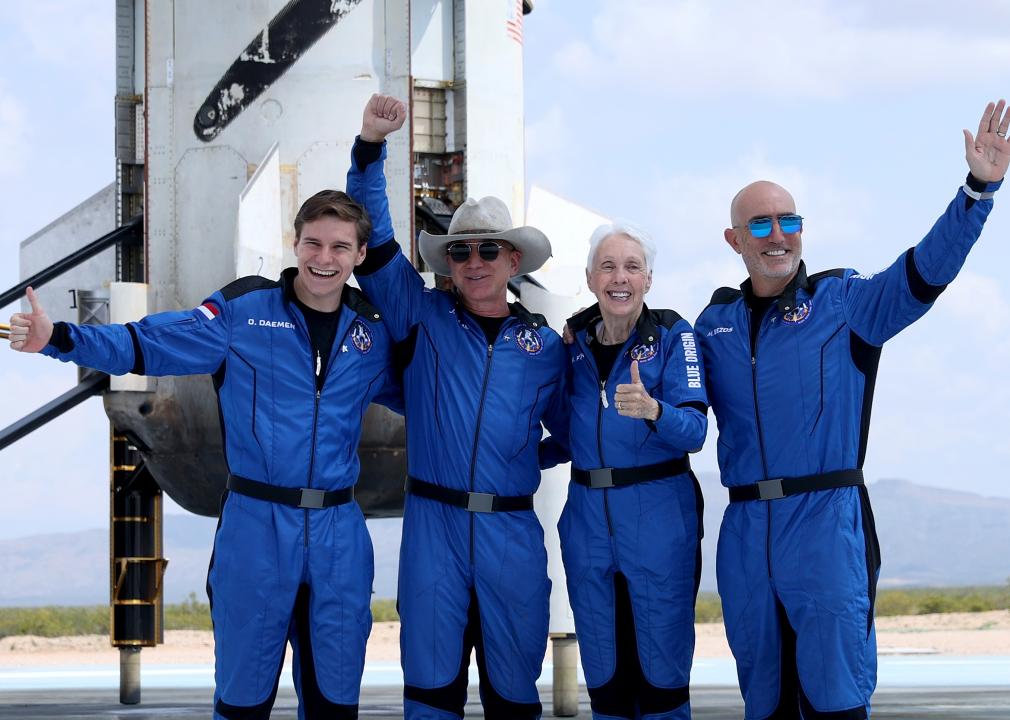 Elon Musk, Jeff Bezos, and Richard Branson all jockeyed for headlines relating to private space travel and astro tourism this year. On July 11, Branson became the first civilian aboard his own rocket ship to reach space—depending on who you ask. Branson reached an altitude of 53 miles above ground—three miles beyond the threshold of space, according to NASA, the U.S. military, and the Federal Aviation Authority. However, if you adhere to the belief that space begins at the Karman Line, as Bezos conveniently does, then Branson just went, well, really high.

Nine days after Branson’s flight, Blue Origin, with Bezos aboard, reached a height of 66.5 miles above Earth’s surface on its inaugural voyage—four miles above the Karman Line. In true best-for-last fashion, Musk’s company SpaceX launched the groundbreaking Inspiration4 mission on September 15, during which four civilians spent three days in orbit without trained astronauts on board. Regardless of where space truly begins, each flight brought humanity one step closer to the reality of commercial space travel.

Since then: If you have the means, you can buy a ticket to space. As of November 2021, Virgin Galactic has sold 700 tickets and Blue Origin has sold $100 million worth, though the price per ticket has not been disclosed. 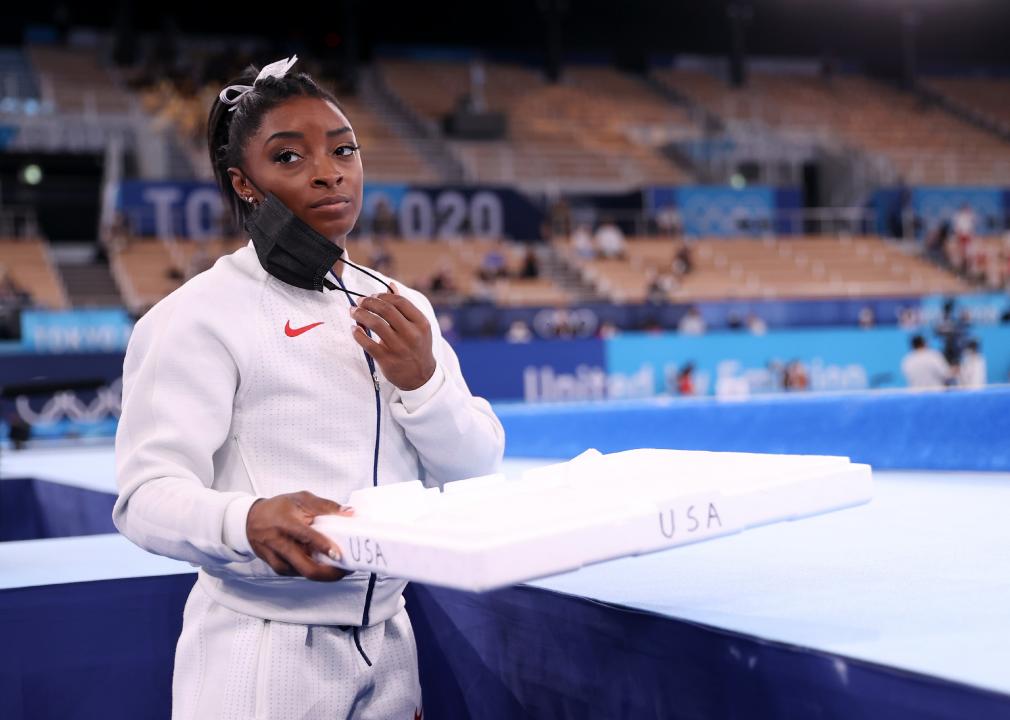 Star gymnast Simone Biles withdrew from the Team USA final during the Tokyo Olympics in July, citing mental health concerns. Her decision initiated an unprecedented conversation about how being a professional athlete, specifically an athlete in the Olympic Games, can exact a dangerous toll on one’s mental health. Biles’ actions drew more social media attention than the highly anticipated and long-advertised interview between Meghan Markel, Prince Harry, and Oprah, according to Newswhip. A chord had been struck. While some lauded her decision as a sign of mental fortitude and maturity, many criticized her choice as weak and selfish.

Since then: Mental health will be a major focus of the 2022 Winter Olympics in Beijing, with athletes undergoing several screenings for depression, anxiety, sleep disorders, and substance use. Team USA will also increase the number of licensed mental health professionals available to athletes, staff, and families at both the Olympic and Paralympic Games. 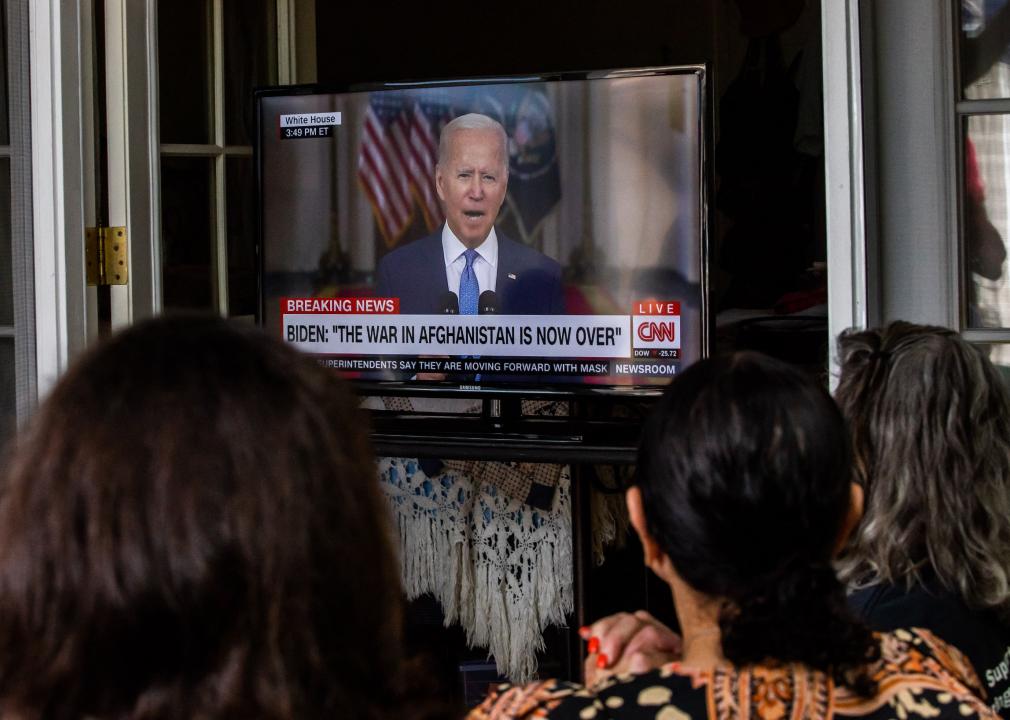 On August 31, the U.S. withdrew the last of its troops from Afghanistan, following through on a deal reached by the Trump administration to end the 20-year war. While the majority of Americans (54%) agree that withdrawal from the country was the right decision, 40% of people believe it was handled poorly. The Taliban regained control of Afghanistan in just under 10 days, before American troops had completed their evacuation, seizing Kabul on August 15. President Joe Biden adamantly defended the decision and the withdrawal operation.

Since then: Roughly 65,000 Afghan refugees were evacuated with American troops and Americans living in-country. As of December, about half of those refugees are still waiting on military bases across the country for their permanent placements in the United States. Back in Afghanistan, now referred to as the Islamic Emirate of Afghanistan by the ruling Taliban, many of the freedoms that were earned over the last two decades are being rolled back and replaced by Sharia law. The Taliban has vaguely assured the world that women, who are among the most oppressed, will still be able to do things like attend school or go to work within the bounds of Islamic law. 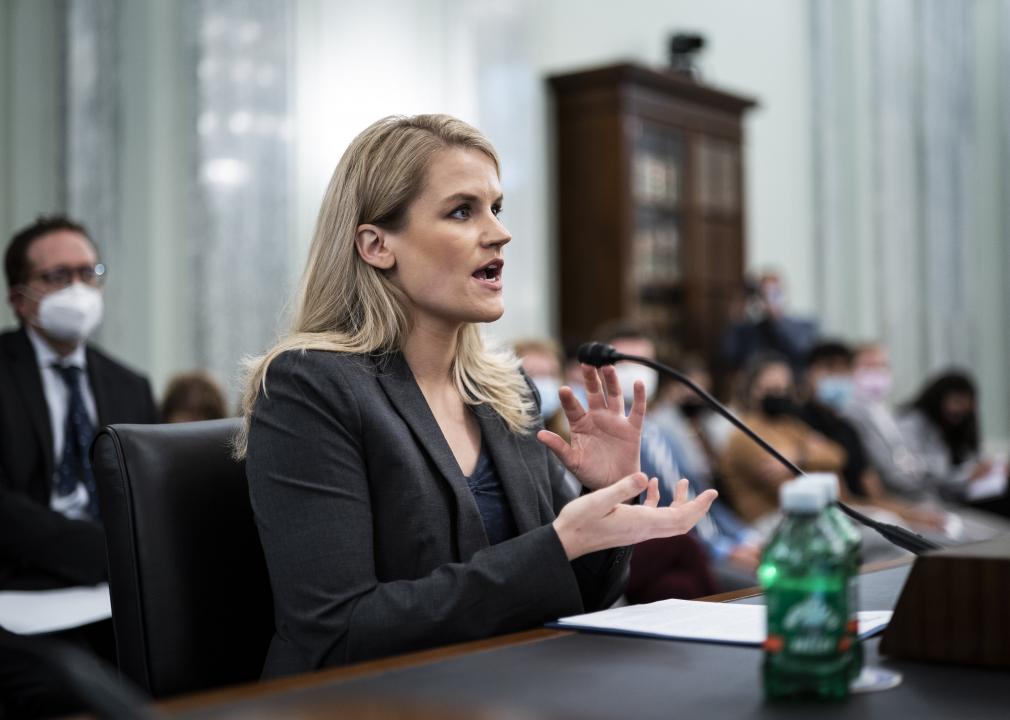 In September, the Wall Street Journal published a series of investigative reports called “The Facebook Files” thanks to documents released by a whistleblower at the company. The files confirm some of the most heinous allegations made against Facebook and its subsidiaries, including the negative impact on teenage girls, the pervasive spread of hate speech and misinformation, and ad hoc decisions around censorship. Perhaps most concerning is that these dangers—and other systemic problems—are well-known and well-documented internally.

Since then: Frances Haugen, a data scientist and former Facebook product manager, revealed her identity as the whistleblower on September 16 in a “60 Minutes” interview. Haugen testified before Congress on October 5, stating that regulations are needed to stop Facebook from consciously harming vulnerable groups around the world. In a more contentious second appearance before Congress, Haugen testified in front of a House Energy and Commerce panel on December 1. Her testimony and subsequent questioning by lawmakers revealed that the issue of tech regulation is sharply divided among party lines.