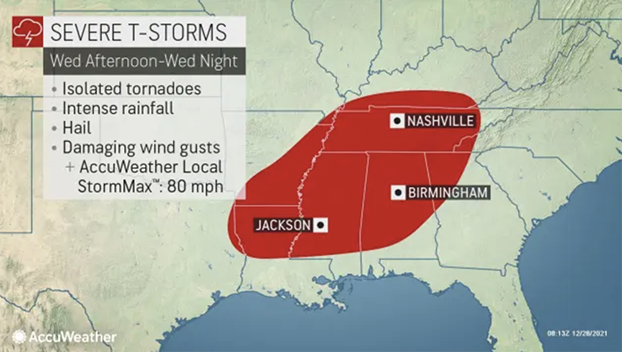 Less than three weeks after a historic tornado outbreak devastated portions of the central and southern United States, another round of feisty severe weather could be delivered in the final days of 2021.

AccuWeather forecasters are eyeing a developing storm as it pushes across the Midwest. In the coming days, stormy weather is forecast to develop across a wide swath of the central and eastern United States. While snow may fall for portions of the Upper Midwest and Great Lakes, a different hazard will develop farther south beginning late Tuesday.

At the root of the hazard is an overabundance of warm, moist air which is set to be transported from the Gulf of Mexico to portions of the southeastern U.S. by midweek.

“This pattern will allow moisture to work well northward into portions of Louisiana, Arkansas, Mississippi, Alabama and even Tennessee on Wednesday and could expand further into the southern Appalachian Mountains Wednesday night,” said AccuWeather Senior Meteorologist Matt Rinde.

This abundant moisture, when coupled with unseasonably warm conditions already in place across much of the South, can set the stage for some explosive development.

Beginning Tuesday night and continuing for many areas into Wednesday night, multiple rounds of rain and thunderstorms are forecast to develop from the Gulf Coast through the Tennessee Valley and into the Ohio Valley.

“The main threat from these storms will be flash flooding and damaging winds, with an AccuWeather Local StormMax™ of 80 mph,” Rinde cautioned, adding that there can also be isolated tornadoes and hail late Wednesday.

Any thunderstorm will arrive with the potential to produce significant rainfall in a short amount of time. Too much rain too quickly can lead to the development of flash flooding, which can turn dangerous quickly for anyone in its path.

In addition to heavy rainfall, any stronger storm can produce locally damaging winds on the order of 50-60 mph. Winds of this magnitude can lead to tree damage and may even impact power lines. Therefore, localized power outages cannot be completely ruled out at midweek.

Areas likely in the path of these potentially feisty storms include cities like Nashville, Tennessee; Birmingham, Alabama; and Atlanta. Travelers on portions of interstates 20, 40, 55 and 65 will also need to keep an eye to the sky for rapidly changing conditions from Tuesday night into Wednesday night.

While any thunderstorm can become locally severe midweek, forecasters say the greatest risk for severe weather will center over portions of the Gulf Coast states. The severe weather bull’s-eye is forecast to mainly focus over portions of Mississippi and Alabama on Wednesday as atmospheric conditions will be the ripest over these areas.

In any severe thunderstorm, drenching rainfall, damaging wind gusts in excess of 60 mph and even hail cannot be ruled out.

This latest threat for potential severe weather comes just over two weeks after a prolific tornado outbreak left entire towns in ruins and at least 92 people dead, according to The Associated Press.

The outbreak, which occurred on Dec. 10 and Dec. 11, produced at least 66 confirmed tornadoes. According to AccuWeather Founder and CEO Dr. Joel N. Myers, the tornadoes are expected to cost about $18 billion in total damage and economic loss.

Cleanup efforts are still underway, especially in places like Mayfield, Kentucky, where damage was extensive. In locations impacted by the strongest of the tornadoes, entire homes were blown off foundations, buildings crumbled and infrastructure was turned to rubble.

While the strongest storms at midweek are expected to remain south of the hardest-hit areas, any rain or wind will be enough to hinder cleanup efforts for a time.

Even after this storm pushes out of the area by Thursday, forecasters will continue to monitor an active storm track that may usher in an even more potent storm for the eastern U.S. as the calendar flips to 2022.

Mississippi hospitalizations from COVID-19 coronavirus up 60 percent since…