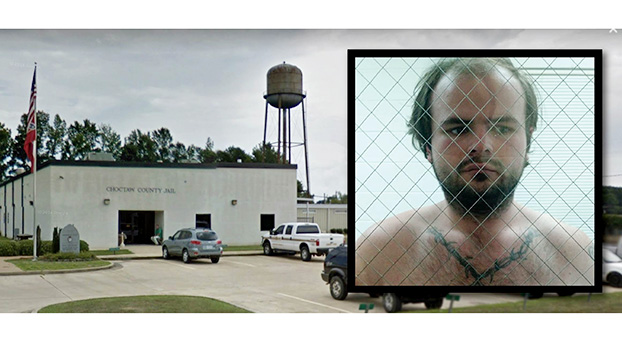 Threatened. Beaten. Denied food, water and his clothes. Constrained in a straitjacket.

Months after Travis Sean Hunt posted a note in Facebook Messenger accusing law enforcement in Choctaw County and Ackerman of these abuses while in their custody, he walked out the back door of his grandmother’s home and hasn’t been seen since.

“I am mentally challenged and physically unable to achieve my goals I’m hurt an uncomfortable for I still feel unfair an upset by the ACTIONS of my Sheriffs department here in choctaw county Ms. I’m distresed and in need of a.Lawyer. I will file for a motion in the. Court room. By the GRACE of God I’m still alive” – Hunt’s Facebook Messenger as it appeared Dec. 18, 2018

Hunt, who has bipolar disorder, went missing on Aug. 11, 2019, from the home of his grandmother, Betty Hunt.

The Facebook Messenger note he sent it to an unknown number of people eight months earlier accused various law enforcement officers from the Choctaw County Sheriff’s and Ackerman Police departments as well as a county constable of mistreating him during his stay in Choctaw County Jail from November 2016 to February 2017.

His mother, Kim Haynes, then of Weir, knew about the allegations Hunt had made against the sheriff’s department but kept quiet about them while the department was looking for her son. “Until recently, I thought just family knew [but] apparently my son wanted it to be known also or he would not (have) sent messages out to others. I’ve stayed quiet about it way too long,” Haynes said in a post to her Facebook page, Prayers for Sean, on Hunt’s 27th birthday, Oct. 18, 2020.

A year later, Haynes posted the same material with an added note: “Until justice is served or Sean comes home, this is all I can do for his birthday. Justice needs to be served. Law is to protect and serve, not beat.”

Haynes said she thought the Mississippi Bureau of Investigation was looking into the allegations, but the MBI told MCIR it had not been asked to investigate. Hayne said she feared if she filed a complaint, something would happen to her. Instead, she moved out of state.

Human Rights Watch, a New York-based international nonprofit that conducts research and advocacy on human rights, released a report in 2015 that concluded mentally ill inmates in prisons and jails across the U.S. are routinely physically abused by guards, including doused with chemical sprays, shocked with stun guns and strapped to chairs or beds for hours.

Jamie Fellner spent more than a year interviewing some 125 officials and mental health experts and reviewing hundreds of cases across the country. Her review, titled “Callous and Cruel: Use of Force against Inmates with Mental Disabilities in US Jails and Prisons,” found prisoners suffering from serious mental illness often are physically punished for using profanity and banging on cell doors.

In 2018, the Bureau of Justice Statistics reported that 14 percent of prisoners in state and federal facilities met the criteria for having serious mental health conditions. In local jails the number was 26 percent while 5 percent of the general population meets those criteria, according to the bureau.

A joint report in 2014 by the Treatment Advocacy Center and the National Sheriffs’ Association, traced the growing problem of jailing people with mental illness to the emptying of mental hospitals beginning in the 1960s with no followup psychiatric care. These deinstitutionalized individuals wound up committing misdemeanor or felony acts usually linked to their untreated mental illness and were arrested, according to the report.

Betty Hunt said when she went to visit Hunt at Choctaw County Jail while he was being held on charges of resisting arrest and suspended driver’s license, she noticed he was bruised and called another family member to come and photograph the bruises. During the visit, Betty Hunt said Halford told her Ackerman Police officer James “Bo” Brooks beat her grandson. Why? she said she asked him. “Because I told him to,” she said he replied.

Betty Hunt said she wasn’t sure when the alleged assault occurred but that Brooks was no longer on the Ackerman force the following week. A list of Sean Hunt’s jail stays provided from the Choctaw County Sheriff’s Department shows that Sean Hunt was in custody on July 17-18, 2016, after he was captured following a July 13, 2016, escape. According to Debbie Boley, Ackerman town clerk, Brooks submitted a letter of resignation from the Ackerman Police Department on July 26, 2016.

Jauch was originally arrested on traffic charges in 2012 and held in Choctaw County after being served with a drug indictment. While in jail, she was forced to temporarily sign over her daughter’s custody rights to her mother. After finally seeing a judge, she was appointed a public defender and quickly made bail. Eventually, she was cleared of the drug charge after undercover video failed to show her committing any crime.

Halford had argued during the federal trial on her lawsuit that he didn’t have to take Jauch before a judge until court met because she’d already been indicted on a felony drug charge, thus establishing probable cause for her detention. The county and Halford also blamed the illegal detention on failures by state court judges.

Jauch’s case was dismissed in 2016, but the 5th U.S. Circuit Court of Appeals sharply criticized that ruling, reinstating Jauch’s case in 2017 and calling her detention “unjust and unfair” and “alien to our law.” The full 5th Circuit and the U.S. Supreme Court refused to hear further appeals by the county.

Following Hunt’s capture, Warden Neal Higgason of Winston-Choctaw Regional Correctional Facility said he was subsequently was transferred there from July 18 to Oct. 14, 2016. He then went back to Choctaw County Jail where he remained until May 19, 2017, according to notes given to Haynes.

On another occasion, Betty Hunt alleged former constable Chris Coleman instructed three inmates being held for transfer to Mississippi Department of Corrections to put Sean Hunt into a straitjacket. Betty Hunt said that Sean Hunt told her the head dispatcher at the time, Brian Pyron, ordered that he be released from it the next morning.

Pryon confirmed to MCIR that he let Sean Hunt out of a straitjacket one morning when he came on duty. He did not remember when the incident occurred or who had been on duty the night before. Pyron worked for the Choctaw County Sheriff’s Department for almost 10 years until January 2020 and had seen Sean Hunt in trouble at the Choctaw County Jail quite a bit. “He was there several times and quite a handful,” Pryon said.

Coleman told MCIR he was aware of Sean Hunt’s accusations. Asked for comment, Coleman said, “Ma’am, I don’t have to sit here and talk to you about that.”

In his 2018 message, Sean Hunt accused Lee Upchurch of punching him, threatening to kill him, and of putting him in a law enforcement vehicle and driving him to South Union Road in Choctaw County, saying that is where his body would be found. Betty Hunt’s account of that incident included that Upchurch opened the door of the vehicle and told Sean Hunt to run. She said her grandson refused, telling Upchurch, “I’m not going to let you shoot me in the back.”

Upchurch, who now works for Starkville Police Department, told MCIR, “He can accuse and do what he wants to do, but I’m not going to make any comment on that.”

Sean Hunt also accused Deputy Glenn Sheedy of pepper spraying him in his cell. Attempts to contact Sheedy were unsuccessful.

Other accusations Hunt made included being kept in his cell without clothing and being denied food and water on a regular basis. Haynes said she went to see her son on three successive weeks where he came to the visitors’ room in nothing but his underwear. On one occasion, she witnessed Halford asking him where his clothes were and Sean Hunt replying, “Y’all ain’t give them back yet.”

The current Choctaw County sheriff, Brandon Busby, who took office in 2020, said he was aware of the allegations and had spoken to the people involved. He does not put much credence in the accusations. “You just had to know Sean,” he said.

Busby said “no one had much to say” when he asked them about the allegations. When asked if he believed they were innocent, he said, “I don’t see why I shouldn’t.”

Cliff Johnson, executive director of the MacArthur Justice Center at the University of Mississippi, said difficulties of county jails dealing with the mentally ill were well-documented and that stories of police brutality were becoming more and more common.

“We know there are abuses of police power across the country,” Johnson said. “If we just keep hiring sheriffs who promise to be the toughest in the county, we shouldn’t be surprised when these things happen.”

Johnson said he believes more training in dealing with mentally ill prisoners is needed to divert them into facilities where they can be treated for their conditions. Complicating the situation is the fact Mississippi State Hospital in Whitfield only has 18 forensic beds for patients accused of crimes. “You have lots of sheriffs saying that they’re not trained or equipped to handle them in jail,” Johnson said.

Family members of incarcerated persons can help, Johnson said. “It’s always the case that there are people who have supportive friends and family have a great advantage,” Johnson said. “People in jail have to have advocates. You have to make a whole lot of noise in these situations.”

Haynes said that her motive for posting the allegations was simple – that justice needs to be served. “The law has no right to abuse cell mates; they supposed to serve and protect, not beat with belt or put straitjacket on,” she said in her Facebook post.

This story was produced by the Mississippi Center for Investigative Reporting, a nonprofit news organization that seeks to inform, educate and empower Mississippians in their communities through the use of investigative journalism. Sign up for our newsletter. Email Julie Whitehead at julie.whitehead.mcir@gmail.com.