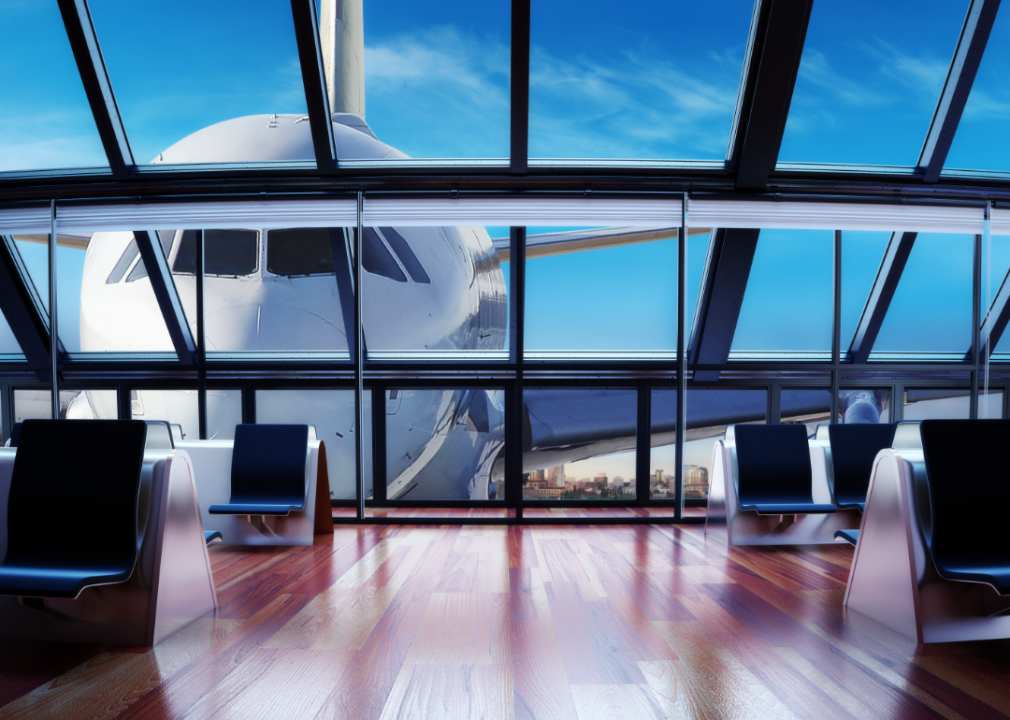 In December 2020, when many would normally be traveling to make it home for the holidays, U.S. air travel was significantly down as we plunged into the first pandemic holiday season. Despite more than 1 million daily air travelers each day for three days over the weekend before Christmas—a record for the pandemic—overall, air travel in December 2020 was just 35% of 2019’s numbers. Vaccines were at the very beginning stages of distribution, and many people opted to invent new traditions to avoid the uncertainty of traveling during COVID-19.

In 2021, however—and despite significant surges in COVID-19 transmission thanks to the Omicron variant—the air travel industry is gearing up for a holiday rebound. Stacker analyzed how the pandemic affected air travel trends, and early signs of recovery. Data came from the Transportation Security Administration, Federal Aviation Administration and Bureau of Transportation.

The number of air travelers during Thanksgiving this year reached about 91% of pre-pandemic numbers But while air travel seems poised to reach a pandemic high, the number of air travel employees has not fully recovered. Layoffs, early-retirement, and career changes due to the pandemic have left air travel industries short-staffed as they face a holiday travel crunch. The industry, already subject to weather-related delays, will deal with these labor shortages during what experts expect to be a busy holiday travel season.

Unruly passenger reports have also increased sharply in 2021. Of the 5,664 reports this year, 72% were mask-related. While the rate of incidents has calmed down since the first half of the year, spikes in travel are likely to coincide with an increased number of incidents.

It’s not yet clear how the Omicron variant will impact air travel’s recovery. The CDC has confirmed the Omicron variant now makes up the majority of cases in the U.S., and widespread infection in places like New York City have prompted some travelers to reconsider plans.

Keep reading to see what caused major flight delays, how crowded planes are, the busiest airports, and more. 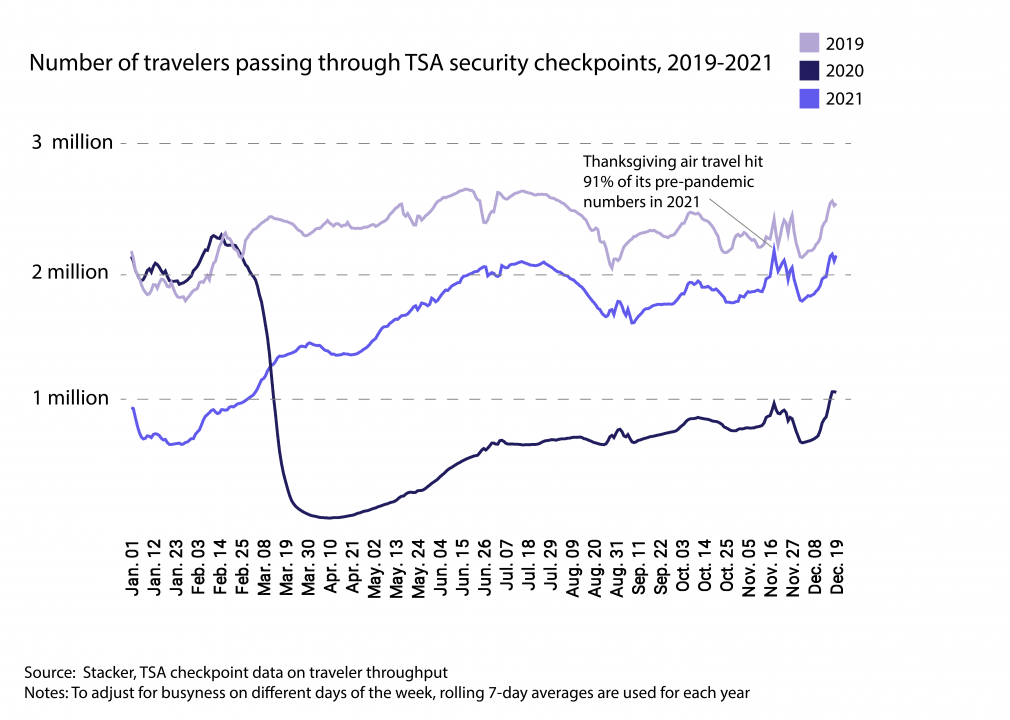 Many travelers cramming in last-minute trips home ahead of shutdowns in March 2020 were met with nearly empty flights, quiet airports, and short security lines. To respond to the sudden drop in demand, airlines canceled domestic flights; in subsequent months, the CDC and local governments urged people to avoid nonessential travel.

Even as some travelers returned to air travel in the second half of 2020, the total number of passengers remained under half of 2019 metrics, based on TSA security checkpoint data. The widespread deployment of vaccines beginning in early 2021 coincided with a steady increase in air travel passengers though and holiday travel is reaching close to pre-pandemic numbers.

The resumption of air travel’s popularity has also meant less booking flexibility. Many airlines waived cancellation and change fees throughout 2020 in attempts to lure people back to air travel. Most of those policies have since ended. 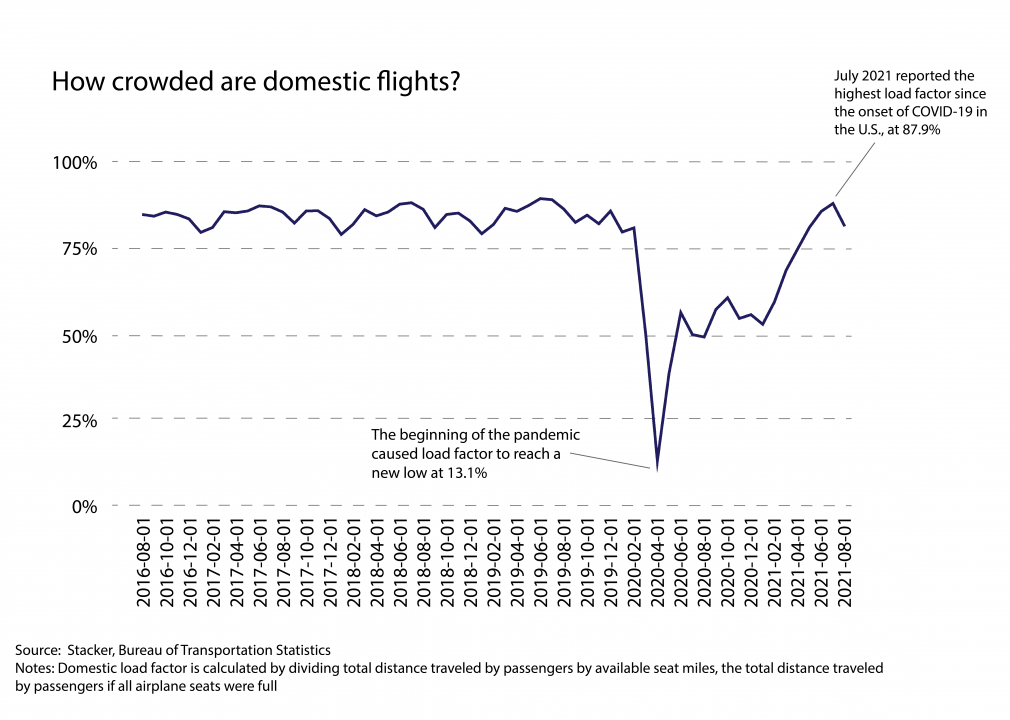 Domestic load factor rebounded to between 50-60% during the latter half of 2020, and in 2021, eagerness to travel and the widespread availability of vaccines have filled planes up once again. July 2021 reported the highest domestic load factor since the onset of the pandemic, at 87.9%. With an anticipated busy holiday season, air travelers can likely expect tight overhead bins and full middle seats. 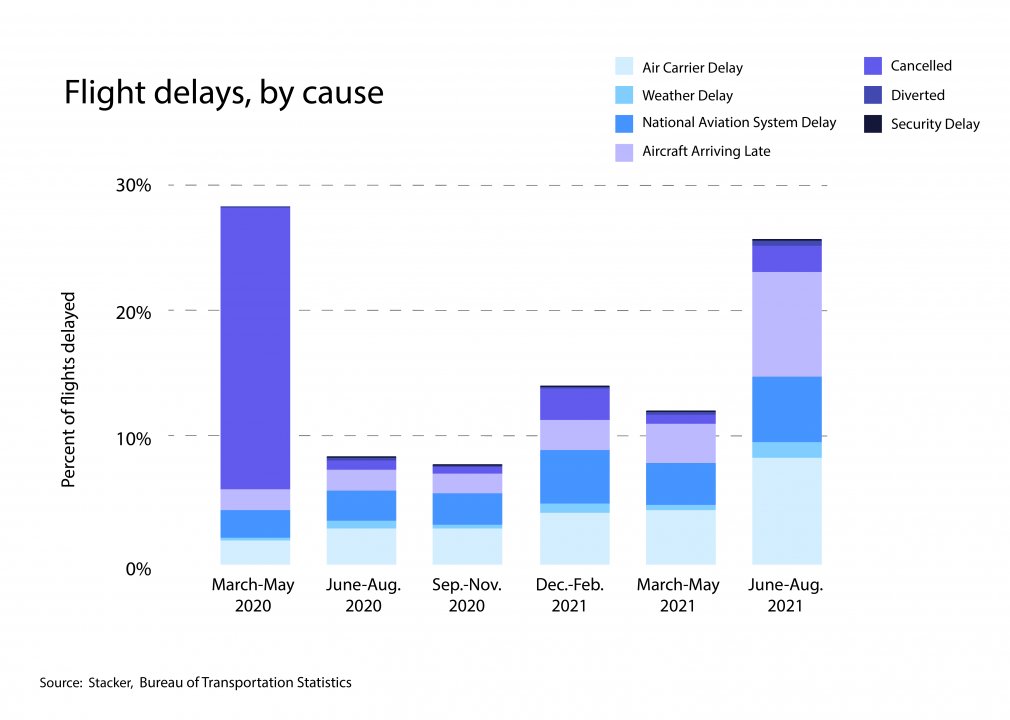 Airlines are struggling to keep up with the renewed demand

As people resumed flying in 2021, flight delays also increased. Between June and August of 2021, 25.71% of flights were delayed or canceled compared to 28.36% between March-May 2020. Flight delays in 2021 were largely related to staffing shortages, rather than a sudden drop in demand. Airlines, which furloughed and laid off much of their staff during the early months of the pandemic, have struggled to regain the staffing they once had. In October 2021, airlines employed 28,000 fewer employees than in October 2019. Additionally, an air traffic control staffing shortage contributed to national aviation system-caused delays.

Southwest reportedly lost $75 million when it canceled more than 2,000 flights during a four-day period in October—but these delays aren’t only costly for airlines. American Airlines canceled nearly 1,500 flights over Halloween weekend, leaving thousands of passengers stranded and scrambling to finish their trip. 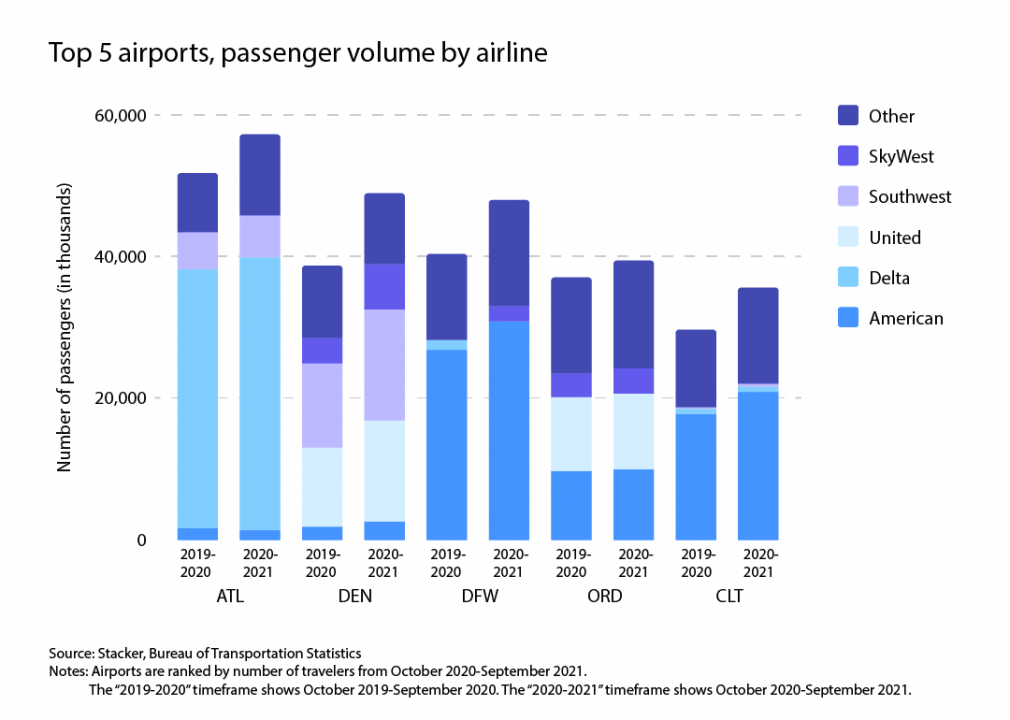 Flight volume and variety is increasing

All airlines took a hit from the widespread cancellations and restrictions during the first nine months of the COVID-19 pandemic. Though larger airlines can weather the storm, smaller companies are not so well protected. Forty-three commercial airlines failed from January to October 2020 despite government aid efforts. Because the pandemic was at a peak during the prime travel months of summer, airlines were not able to build up their typical stores of cash that help them survive slower seasons.

Current data shows a healthy variety of airlines at the top five busiest domestic airports. While United, American, Delta, and Southwest have historically served as the predominant carriers in the U.S., the percent share of airline volume from other companies increased in 2021 at all but one of the five busiest airports. The raw share of “other” airline volume increased at all five, including no-frills budget airlines. 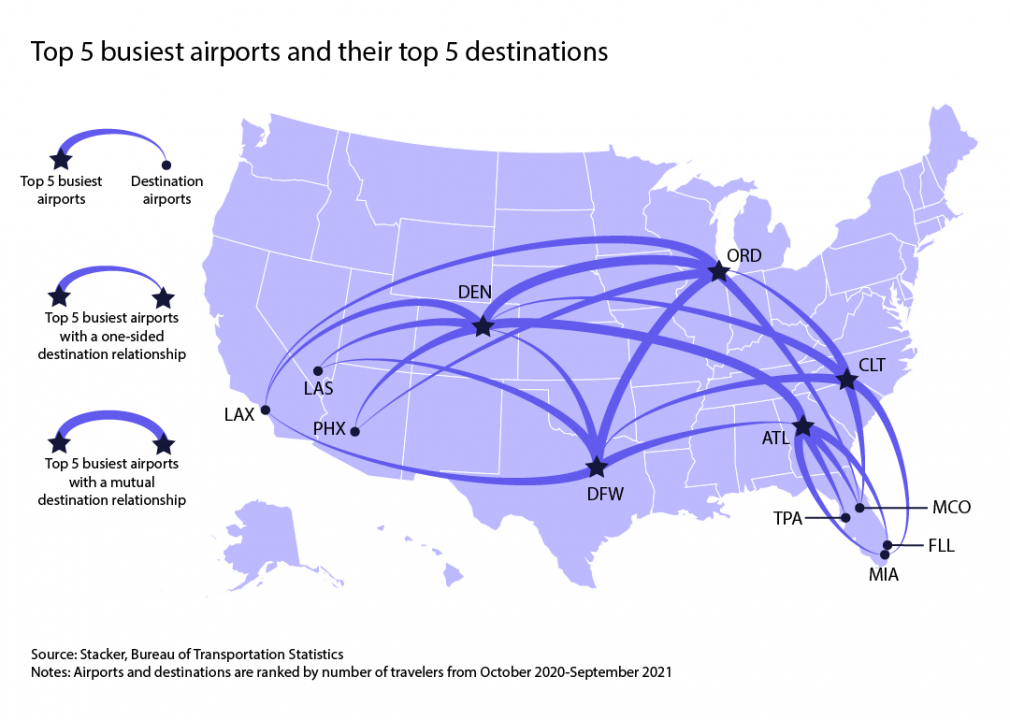 Of the 12 airports that make up the five busiest airports and their top five destinations, 10 fall below the Mason-Dixon line. A quarter of the dozen are in Florida alone, indicative of the state’s thriving tourism industry and renouncement of COVID-19 restrictions. Significant airports missing from the map include all of New York’s destinations, as well as Seattle, Minneapolis-St.Paul, and San Francisco. All of these destinations had far more strict COVID-management measures than Florida, Georgia, and Texas, where half of the busiest airports and their destinations are located.

Randomness: How long do these 50 common items take…