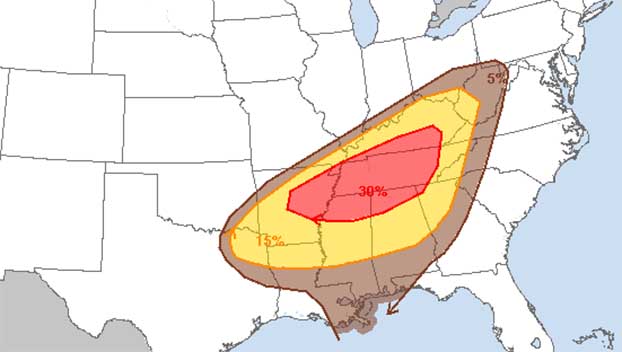 Severe storms are expected across the Deep South on New Year’s Eve and New Year’s Day as forecasters assessed damaged from earlier tornadoes that struck towns in Alabama and Georgia.

The national Storm Prediction Center says that central Arkansas and western parts of Tennessee and Kentucky will be most at risk from New Year’s Eve storms.

Wednesday’s storms struck multiple communities in Alabama, including Winfield, where much of the downtown area was damaged. The National Weather Service on Friday confirmed an EF-1 tornado touched down there. No further details were immediately released.

More surveys are ongoing in Chilton, Shelby and Etowah counties, the weather service said. An emergency manager in Etowah County reported that a pole barn was destroyed and at least two homes damaged.

In the south Georgia town of Bainbridge, a tornado peeled back the roof of a convenience store, the weather service said.