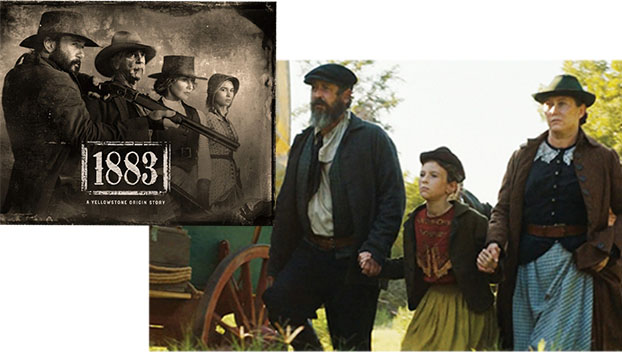 For four months a family with deep Wesson roots has lived in the past — 138 years in the past, to be exact.

Brookhaven Academy student Jayden Hamilton, along with parents Josh and Derryn, have been part of the Paramount+ Network’s “1883: A Yellowstone Origin Story,” which filmed in Texas and Montana, since the end of August.

“Jayden turned 10 while we were out there and lost two teeth in the journey,” said mom Derryn, clarifying that the tooth losses were from normal growth, not injury.

“It was an amazing experience,” she said. “It was definitely long and it was not all easy.”

The young actress Jayden has had experience on the stage at Brookhaven Little Theatre and film experience in such movies as “Teacher’s Watching,” a Lifetime movie filmed in Clinton; the Kevin James Netflix film “Home Team”; FX Network’s “Platform” series; and Morgan Freeman’s “Paradise Highway,” which partially filmed in Brookhaven in 2021. Derryn has been in most of the films with her as an extra, partly due to Jayden’s age. Dad Josh also had a part as a truck driver in the Freeman flick.

When Jayden auditioned for “1883,” the casting director asked the three to come aboard as an immigrant Wild West family. With the support of their employers, family and friends, the Hamiltons were able to commit to the production and have completely enjoyed it — though days could be long and hard, cold and hot.

“We started off in Texas and the temps were over 100 degrees,” Derryn said. “We had four layers of clothes on — jackets, hats and everything. Costuming was done to a T for the period. Even though you didn’t see the four layers watching, they were definitely all there.”

Then production moved to Montana and four layers were not enough, she said. Temps dropped to -14, with winds adding to it. The family and entire cast and crew went from extreme heat to extreme cold, so adjustments had to be made daily.

Derryn said they got to meet lots of new, amazing people. Meeting stars Sam Elliott, Tim McGraw and Faith Hill was exciting and fun for them all, she said.

“The first scene we did, the door opens and Sam Elliott walks in, and we’re sitting at his feet. My husband said, ‘Oh, my gosh! That’s Sam Elliott, and we’re right here … and his mustache is even more elegant in person,’” Derryn said, laughing.

“Faith was so sweet. When it was so cold, she would come down and give the kids her own coat. She wanted to make sure they were warm before she was,” said Derryn.

At a break in filming in Texas, everyone was by a river and Hill and McGraw were skipping rocks with the children from the cast, seeing who could get theirs to go the furthest. When McGraw introduced himself to Jayden as Tim, Derryn said he treated her like an equal. Later that day she asked her daughter if she knew who that man was who had spoken with her.

The familiarity was intentional on the part of the stars, other cast and crew alike, Derryn said. Everyone was made to feel at home and a part of what they were going through as a unit.

“Everything was filmed outside — very few things were not — and it was wagons and horses and people and nothing else,” she said.

The production was intended to be as authentic as possible — the actors rode the horses, walked beside the wagons, made the river crossings. No stunt doubles were utilized in their places, Derryn said.

“If I lived back then, I don’t think I could have made that journey,” she said. “The terrain, the ground … you had rocks and holes and all … and those shoes were not like tennis shoes. Now I know why someone invented tennis shoes.”

“On the wagon trail, the first scene you see they were telling us was movie history,” Derryn said. “It was the most wagons pulled by horses not digitally enhanced that’s ever been done on film.”

A typical day of filming involved a commute of one to one-and-a-half hours each way on a shuttle bus, sometimes leaving the hotel at 4 a.m. and getting back on the bus at 8 p.m. Minors like Jayden could only film five hours each day, and spent three hours daily working on school work with teachers at tables outside — no internet.

Derryn said they were going to miss the unbelievable views of the country, and how it felt like they were actually seeing what life was like during that point in history.

“It was beautiful, and just to think that’s what it was like,” Derryn said.

They will also miss the “real good food” of the catering, she said.

Jayden had a lot of acting opportunities ahead of her now that would not have been there before, her mother said.

Over the four months of filming, snow and a few other things that were beyond anyone’s control delayed production at times. So the Hamiltons will return to complete filming for about seven days in mid-January.

“It’s definitely good to be home for a while. This was just an amazing journey we didn’t think we could ever in a lifetime experience,” she said.

“1883: A Yellowstone Origin Story” is streaming on the Paramount+ Network.