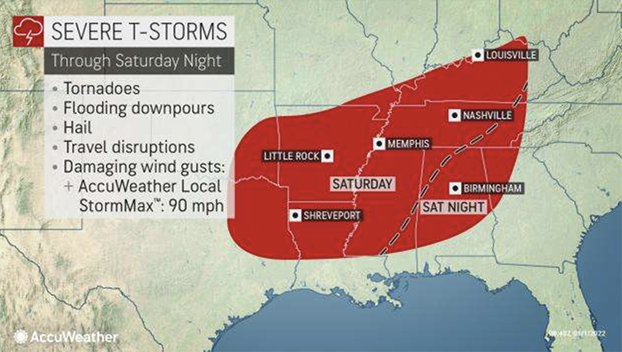 A potentially dangerous start to 2022 is underway as Mother Nature has primed the atmosphere for severe weather across the southern and central United States. After closing out 2021 with multiple high-end severe weather events during the month of December, January seems to be picking up right where December left off.

The severe threat will occur during the first weekend of 2022, with bulk of the activity expected into Saturday night. The threats include thunderstorms with high winds, hail, flash flooding and even tornadoes. Incidents of flooding are also anticipated in areas where thunder and lightning do not occur.

Unfortunately, some of the same locations which had devastating tornadoes just three weeks ago may have to deal with severe thunderstorms once again on Saturday. This includes western portions of Kentucky and Tennessee, as well as Arkansas. Bowling Green, Kentucky; Nashville and Memphis, Tennessee; Tupelo, Mississippi; Little Rock, Arkansas; and Shreveport, Louisiana, are just some of the locations with a threat of severe weather on Saturday. Hail, damaging wind gusts and tornadoes will all be possible.

The severe threat will shift farther to the east on Saturday night. Residents of Birmingham and Montgomery, Alabama, and Atlanta will need to have a way to be awoken on Saturday night, should a severe thunderstorm or tornado warning be issued overnight while most are sleeping.

The threat for thunderstorms is expected to span into the Southeast into the day on Sunday as well. While the overall threat may be slightly lower compared to Saturday, residents across the Carolinas, Georgia and the panhandle of Florida should not let their guard down.

Conditions will be monitored closely across the region, as a resurgence of energy is expected to be injected into the storm.

Not only will a threat for severe weather arise from this expansive storm, but a threat for flooding will build as well. There were already flash flood warnings issued late Friday night across an expansive swath of Arkansas, as thunderstorms repeatedly moved over the same areas. This is known as training, since the rain moves along the same track just as a train does.

Through the remainder of the weekend, the Tennessee and Ohio River valleys, and the southern reaches of the Appalachian Mountains will likely be the focus of the flooding threat.

In the wake of the flooding and severe threat on Sunday, the expansive storm will feature its final act of disruptive weather — a blast of cold air. While high temperatures can eclipse the 70-degree mark on Saturday, temperatures will tumble into the 30s on Sunday.

Residual moisture lingering within the cold air on the back side of the storm may catch residents off guard, as temperatures are expected to fall enough for rain to change over to snow for a brief time Sunday, Sunday night and into early Monday morning. Enough snow to coat grassy surfaces and create slick spots on elevated surfaces are possible.

The crashing temperatures and potential for snow will only make any cleanup efforts more difficult across the South in the wake of severe thunderstorms into early week. Luckily, temperatures will moderate Monday and Tuesday and most of the impacted areas will remain precipitation-free until Wednesday.

For the latest weather news check back on AccuWeather.com. Watch the AccuWeather Network on DIRECTV, Frontier, Spectrum, fuboTV, Philo, and Verizon Fios. AccuWeather Now is now available on your preferred streaming platform.

Things are Buc-ee-ing up. Deal finalized on land purchase…