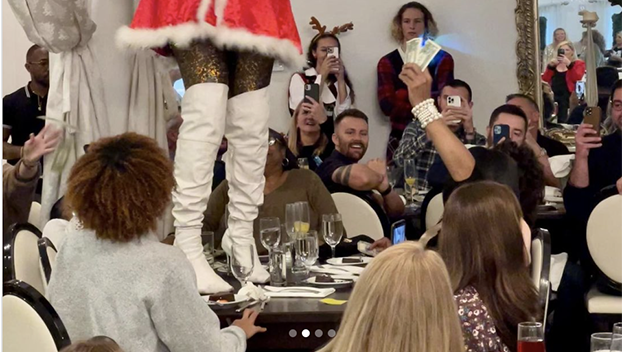 It was an hour into brunch at the White Pillars restaurant in Biloxi when Lexis Redd D’Ville lifted a thigh-high white stiletto boot and stepped onto a solid oak dining table. Around the room, 100 people waved $1 bills in her direction.

The dining table on which the drag queen strutted and twirled in her sparkling gold bodysuit (she had just taken off a festive red coat with white trim) was occupied by White Pillars regular Steve Delahousey and his friends. As D’Ville danced, Delahousey picked up the special gold toy gun he had bought on Amazon for just this moment. Delahousey leaned back in his chair, pulled the trigger, and sprayed $1 bills into the air around D’Ville.

“If you think about it, on a Sunday, where else is this happening down here?” said senior server Dillon Wales, a 29-year-old Coast native.

Wales, who started working at White Pillars about two and a half years ago, said the restaurant’s regular drag brunch, which launched in 2019, was part of the draw for him. Wales is gay, and the drag brunch showed him the business respected and celebrated LGBTQ people.

Nearly everyone involved in the always-sold-out monthly drag brunches at White Pillars, from the queens to the restaurant owners, agree the set-up seems improbable. This is the Deep South, and White Pillars has been “an icon” on the Coast for so long that Delahousey remembers coming there with his father, a Biloxi detective, as a child decades ago.

“I will say that I have prided myself on taking the chances and kicking open the doors people would not have expected,” said Autherius Lawson, the Gulfport native who performs as D’Ville and hosts the event.

Lawson lived on the Coast until recently, but other performers were less familiar with Biloxi.

“For it to be such a country town in the Bible Belt, I was just shocked to see the participation of all demographics — especially the heterosexual community,” said Ladi Phat Kat, a queen from Shreveport with 20 years of drag experience.

But in another way, it makes perfect sense. Long reliant on tourism, the Coast has always been a place where Mississippi’s rigid notions of propriety bend in favor of profit. At White Pillars, drag brunch has been good business.

And there is no real mystery to their success, Ladi Phat Kat explained.

The queens arrive in Biloxi from nearby corners of the Deep South: Shreveport, Mobile, New Orleans, Baton Rouge, Hattiesburg and tiny Cut Off, Louisiana.

Lawson’s path to drag began with theater, when he played Angel Dumott Schunard in a local production of Rent. The character was a drag queen (though many fans and critics believe she is a trans woman, and some actors have portrayed her as such), and Lawson realized he loved the performance.

He started performing at Club Veaux, a now-closed bar in Biloxi, when he was about 18.

Lawson says he came from “a very Southern Baptist background,” and his family didn’t immediately embrace his drag career.

“I cried,” his mother Evelina Brunell said in an interview with the Sun Herald. “It was just a shock.”

When she asked him for help doing her makeup before church, Lawson said he knew she had come around.

Now, she attends many of his performances, including at the White Pillars. Her favorite numbers in Lexis Redd D’Ville’s repertoire are Whitney Houston songs.

“He has a great business mind, and I like to see him succeed,” she said.

Lawson’s career has grown with the expansion of drag on the Coast. Drag has been a staple at gay bars like Sipps in Gulfport and Just Us in Biloxi, but it’s no longer uncommon in predominately straight spaces. Recently, Lawson performed at the Knock Knock Lounge in Waveland.

“Definitely I would never have expected to do drag in Waveland,” he said. “That’s just not necessarily the neck of the woods where a 6’3 African American man with a wig would do too well.”

From the bayou to Hub City, the queens of the White Pillars cast claim the small-town South as their own.

“I’m still homeless,” he said. “I’m still rebuilding my house by hand. I’m glad that I get to escape and come do this.”

For White Pillars, drag brunch is both a statement of values and a business opportunity.

Co-owner Tresse Sumrall said it began with conversations with staff at the restaurant, about 40% of whom are LGBTQ. They mentioned a group of local drag queens had a following on the Coast. Why not hold an event at White Pillars?

The first drag brunch took place in 2019. It was sold out, just like every other drag brunch since, except one.

Since she and her husband, Chef Austin Sumrall, opened the restaurant in 2017, they’ve emphasized that while they offer high-end food (Austin is a James Beard semi-finalist) and service, they’re not a white tablecloth establishment.

With its neo-classical facade, however, White Pillars can look like a stuffy place, Tresse Sumrall said.

“But drag brunch has really brought in a whole new demographic,” she said.

She did encounter some pushback. People would call to make a Sunday reservation and find out the restaurant was closed for a ticketed event.

The event has been so successful that the Sumralls have planned for another full year of drag brunches, every third Sunday in each month of 2022.

Gaspard pointed out that brunch can be a more accessible event for people who might be curious about drag but uninterested in staying out late at a bar.

Lawson thinks exposing someone to drag can have consequences after the performance ends.

“The clientele seemed to really enjoy it, something they’re not used to, which was also one of my goals: to put drag in front of people who have never seen it before, because I have a firm belief that ignorance breeds fear and fear breeds hate, which leads to a society we can’t live in,” Lawson said.

On the Sunday before Christmas, the audience starts to arrive not long after 10 a.m. They take their seats in the dining room and sip mimosas as the queens get ready upstairs.

The logistical choreography required to pull off an immersive drag experience has already been underway for weeks. Lawson plans the openers and closers and sometimes makes changes to the lineup of songs at the last minute. (Gaspard brings extra outfits in case this happens.)

The cash is loaded into a messenger bag carried by manager Michael Sigafoose. Some people, like Delahousey, come prepared with plenty of their own bills, but others need to exchange $20s and $100s for the $1s in Sigafoose’s bag.

Lawson’s mom, Evelina Brunell, settles into her table with a few friends who had told her they wanted to see Lexis Redd D’Ville perform.

At 11:40 a.m., Lexis Redd D’Ville and Ivy Dripp enter the room to cheers and applause. D’Ville asks how many people are at their first drag show. About a third of the audience, most of whom are young or middle-aged white women, raises their hands.

“Never fear, your friendly neighborhood queers are here,” she announces.

Ivy Dripp, channeling Marilyn Monroe in a white dress, is delicately plucking bills from the outstretched hands of the adoring audience as “Santa Baby” plays.

Aariyah Sinclaire, wearing a confection-like pink tulle coat she made herself (every outfit is handmade by the performer or by someone they know), bends over backwards and twirls in her stilettos. When she casts off the coat with a dramatic flourish, a young man named Trent, who works with Norman, darts onto the dance floor to pick it up for her.

Trent is one of two young men tasked with collecting the dollar bills, which often requires crawling around on the floor to grab fistfuls of cash. He wears a Christmas tie decorated with pugs and carries a wicker basket for the money.

“They’re making me sweat, I tell you what,” he says.

As the room fills with the smell of coffee, other drinks are still flowing. The spectators leave their seats to dance. Some of the waiters join them.

“I have no idea where to pick up the dollar bills,” says Trent, watching the crowded dance floor from the sidelines.

For the final number, every queen returns to the room. Lexis Redd D’Ville swigs from a bottle of prosecco. Three audience members have climbed onto the bar. The line between performer and audience blurs as the show becomes a party, queens and mortals shaking together.

There’s a final roll call for the performers and a round of applause.

Ivy Dripp tells the audience that they can keep stuffing money in her chest.