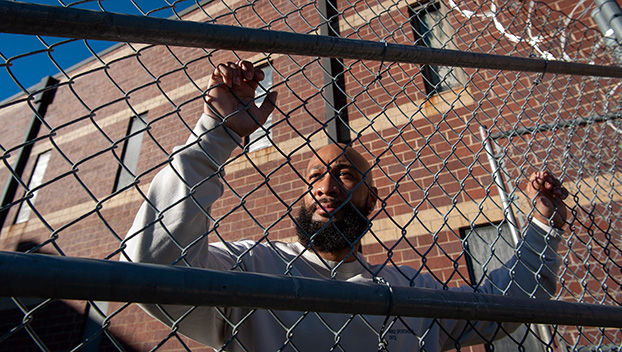 Duane Lake stands for a portrait outside the abandoned Coahoma County Jail in Clarksdale, Mississippi on Jan. 10, 2022. (Rory Doyle/MCIR)

Duane Lake spent six years locked up in a jail cell in Clarksdale for a triple murder he didn’t commit.

“I lost it all — my family, my marriage, my job, my career,” said the 35-year-old welder. “Now I’m working, trying to get everything back. I’ve got to take it one day at a time.”

He spent many of those days in the “dead zone” — what defense lawyers are calling the time behind bars without legal representation. He was arrested in 2015, but he wasn’t indicted until two years later. Then he spent another four years in jail while awaiting trial.

But he had no lawyer to fight for his release, so he wound up filing his own motions for a speedy trial. He never heard anything back.

In November — more than six years after he was jailed — a jury acquitted him of capital murder.

No money, no lawyer, no bail

Lake is far from alone. Thousands of Mississippians are locked up in jails awaiting trial because they can’t afford a lawyer.

Cliff Johnson, director of the Roderick and Solange MacArthur Justice Center at the University of Mississippi School of Law, said about 85% of those charged with crimes in the state can’t afford private lawyers and must rely on public defenders.

The problem? “Many of those same poor people who can’t make bail are forced to rely on a public defender system that appoints them a lawyer at the outset of their case who handles only preliminary matters and then disappears,” Johnson said. “No other lawyer is appointed until after an indictment is obtained by the district attorney, and in Mississippi that can takes months or even years because we don’t have a time limit on how long a person can be jailed prior to action by a grand jury.”

He referred to that lengthy stretch without representation as “the dead zone.”

“It is a failure of Mississippi’s criminal legal system that has devastating consequences for poor defendants,” Johnson said.

Mississippi is one of five states with no statewide public defender system. Instead, the burden for legal representation falls on local governments, many of which struggle to fund such representation.

Johnson said he’s amazed “how cavalier some Mississippians are when it comes to allowing the government to take people’s liberty. They say they don’t trust the government, but they sure seem happy to let the government rob other folks of their freedom.”

Because Lake’s case appeared to have been weak, he said, if a public defender had been appointed and worked early on the matter, perhaps prosecutors would have considered a request to dismiss the charge.

Instead, Lake languished in jail for six years, he said.

“The law and our criminal rules say that there is a presumption of release prior to trial and that requiring payment for one’s freedom should be the exception rather than the rule,” he said. “But Mississippi judges demand that people pay for their liberty in 99 percent of felony cases, presumption of innocence be damned.”

Th​e problem ​caused by the combination of Mississippi’s bail practices and spotty public defender system is growing because the jail population continues to grow, he said. The number of Mississippians incarcerated in county jails across the state have increased by more than 500 since the pandemic began, a report by his office shows.

An MCIR analysis of the database shows that 1 out of every 17 people in a Mississippi jail hasn’t been indicted. Most have been jailed for more than two months — enough time for people to lose jobs and fall behind on financial commitments while they wait for legal help.

Of those, 89 have been jailed more than six months, and 29 have gone more than a year. One man arrested for murder in Lauderdale County has been jailed for nearly four years. He still hasn’t been indicted.

That extra time behind bars costs Mississippi counties, which spend at least $90 million a year for pretrial incarceration alone.

Nationwide, local spending on jails now tops $25 billion, despite falling crime, according to Pew Trusts. In 2017, local governments spent 521% more on corrections than they did 40 years earlier.

Before Hurricane Katrina struck New Orleans in 2005, the Orleans Parish Prison jailed up to 7,000 inmates.

“The vast majority of legal representation didn’t start until the (district attorney) filed charges,” which meant many spent months in jail without a lawyer, said Deputy Chief Defender Danny Engelberg.

Legal representation now begins with the “dead zone,” which has reduced the jail population, he said. “We’re just below 900 now, which is a drastic decrease.”

This early intervention, he said, has helped bring other changes as well, getting people into drug treatment or mental health treatment they need, rather than warehousing them in jail.

This approach has saved taxpayers millions of dollars, and it’s also made the jail a safer and healthier place, he said. “It’s still a dangerous place, but the jail used to be one of the most dangerous places in the world.”

Asked about some Mississippians being jailed for up to two years or more without an indictment, he replied, “If you had a lawyer doing their job, that wouldn’t happen.”

Former Mississippi Supreme Court Justice Oliver Diaz Jr. said Mississippi needs a statewide public defender system because some rural areas of the state lack the money to fund legal representation. “People should be given an attorney,” he said.

Such a system could be funded through court fees and similar funds, rather than taking money from taxpayers, he said. “Other states have been able to manage it, and it works.”

For Lake, the nightmare began after police found the bodies of Alton Bruce, 69, and Candace Roper, 28, on Oct. 1, 2015, in Clarksdale. He was charged with their killings and the death of Roper’s unborn child.

Lake, who already had convictions for purse snatching and cocaine possession, was now charged with capital murder. A conviction meant he would face life without parole or death by lethal injection.

Someone in jail told officers that Lake had confessed to the killings, later admitting that he had lied, Lake said.

Then there was a guy who was shot that same night but said he didn’t know who had fired the gun, Lake said. “Four years later, he said he was shot by me.”

That story, too, fell apart at trial.

Soon after his arrest, he penned letters to prosecutors, declaring his innocence.

“I asked for a speedy trial. I wrote motions to dismiss. I wrote the judge,” Lake said. “I never heard anything back.”

Neither the district attorney nor trial judge responded to requests for comment.

The day the jury found Lake not guilty on all charges, he walked free. “It felt like a dream,” he said. “It still feels unreal.”

He said it might sound strange, but after six years, he began to think of jail as home. “I kept thinking, ‘This must be what hell feels like, repeating the same thing every day, over and over again.’”

At one point, he was unable to leave his cell for two years, he said.

During his time in jail, he saw “black mold, green mold and rats everywhere,” he said. “They were feeding us sandwiches every day.”

For now, Lake is trying to put back the pieces of his life.

His Social Security card has been lost. So has his driver’s license. When Christmas came, he had no money to buy his children presents. He doesn’t qualify for any compensation, despite the loss of six years of his life.

But he still holds onto hope. Hope that he can put the pieces together. Hope that his dreams can become a reality.

“The most important thing to me now is being a great dad and being a great man,” he said. “Money, I’ll get it. I just want to do better. I want to leave my kids something they can build on. Build a legacy. Have a family together and have them helping people.”

Jayme Fraser and Kristine de Leon contributed to this report.