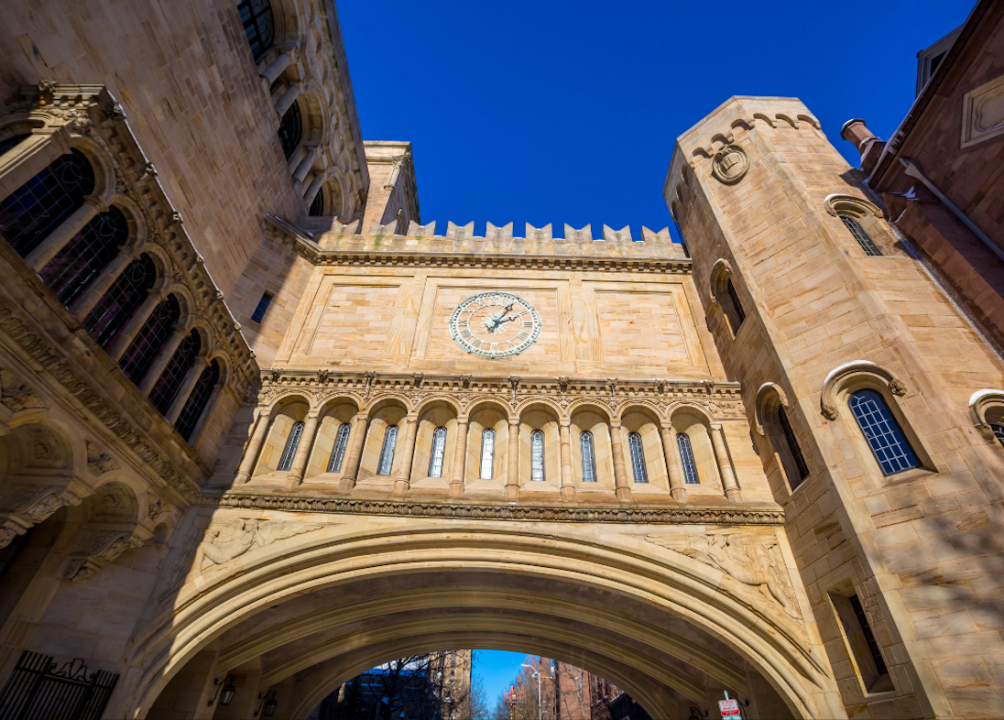 Education has always been a cornerstone of the American experience. Founding Father Benjamin Franklin stressed the importance of having a place to teach America’s youth back in 1749. Franklin famously said, “An investment in knowledge pays the best interest.”

Even before then, the colonists knew education was the key to the furthering the nascent nation—the first institution of higher education opened its doors on American soil back in the 1600s. In fact, many North American colonies began their own schools, which educated the nation’s founders. These universities played a crucial role in offering opportunities to the masses and striking the match that lit the American Dream. Several schools on this list owe their creation to serving disadvantaged communities like women, African Americans, and Native Americans, groups traditionally excluded from higher learning.

Stacker used data compiled by the education experts at Niche to track the history of higher education in the United State of America and list the 25 oldest colleges. To qualify for the list, the schools still have to be operating today, although name changes didn’t affect eligibility. While some colleges floundered and went under, this list examines the survivors—colleges that opened their doors centuries ago and haven’t shut them yet. From early colonial colleges all the way to the universities formed just years after writing the Constitution, 153 years separate the oldest school on this list from the 25th spot.

Keep reading to find out which Pennsylvania university received its charter the same year as the Constitutional Convention in Philadelphia, and which tiny Maryland college started its life as King William’s School. Learn which universities were started by English royalty, which university launched America’s first study-abroad program, and, of course, learn which college is the oldest higher-education institution in the country.

You may also like: Counties in every state with the most old homes 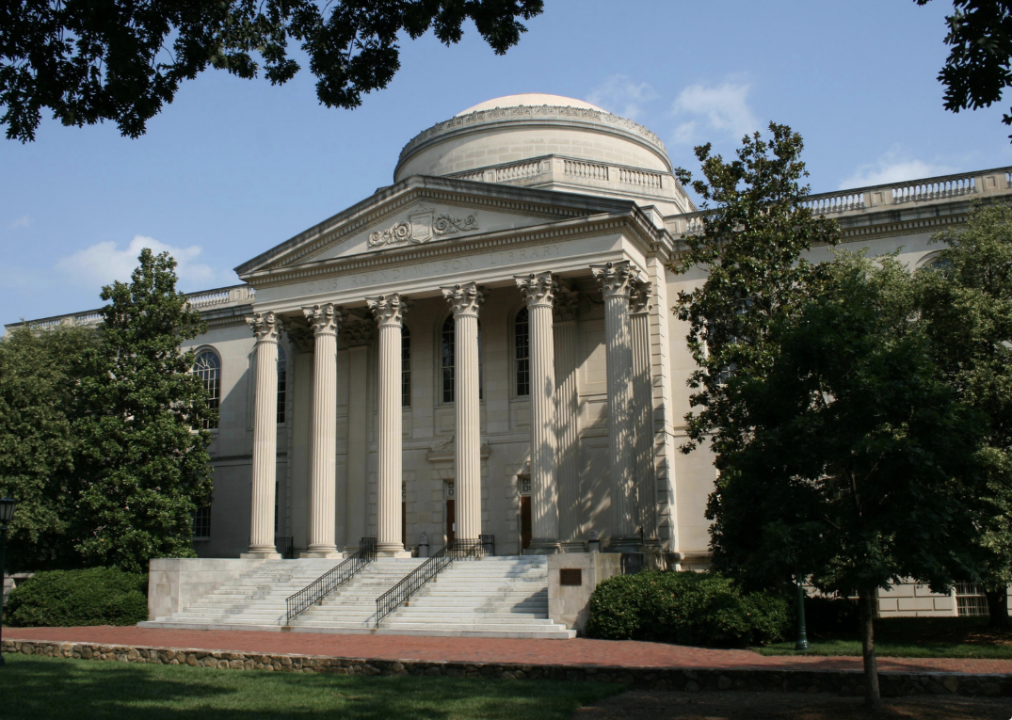 The University of North Carolina at Chapel Hill is well-known for its immense success in college basketball over the past few decades, but the school made history for a different reason back in 1789. It was the first public university in the nation, and the only public American university to award degrees in the 18th century. The school got its famous “Tar Heel” nickname from the workers who toiled in the state’s pine forests and walked through the tar produced from burning pine boughs. 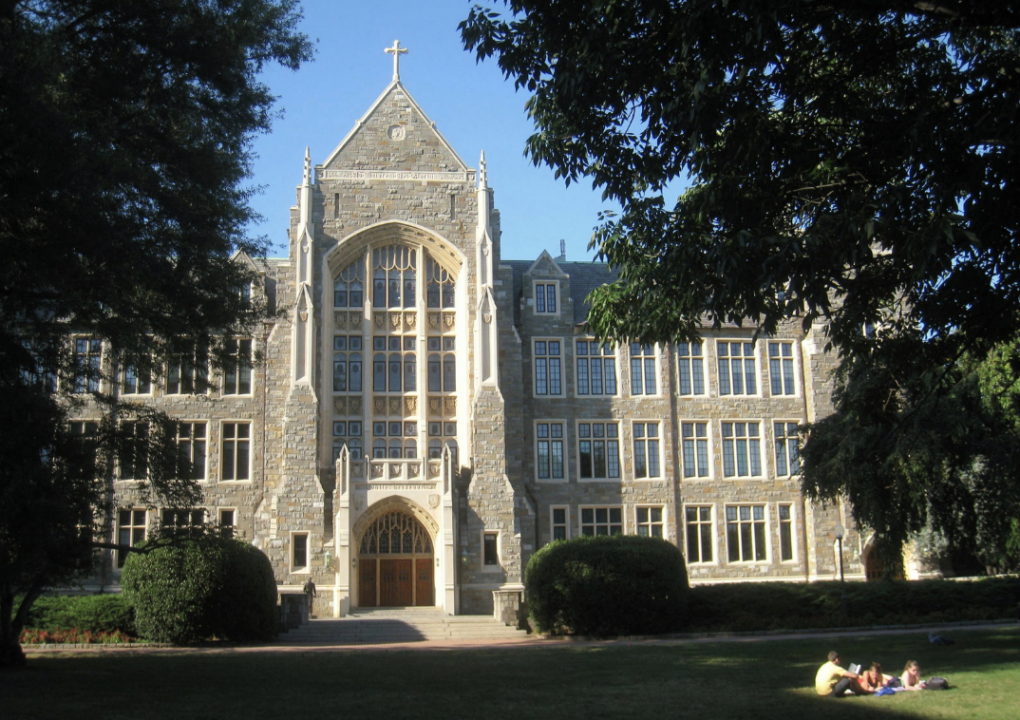 Washington D.C. is home to Georgetown University, the oldest Catholic and Jesuit college in the nation. After John Carroll secured 60 acres for the school in 1789, classes began in 1792 with just over 40 students attending the newly formed Georgetown College. President Bill Clinton attended the school as an undergraduate and was named president of his freshman and sophomore year classes, but couldn’t earn victory in the election for the general student body. 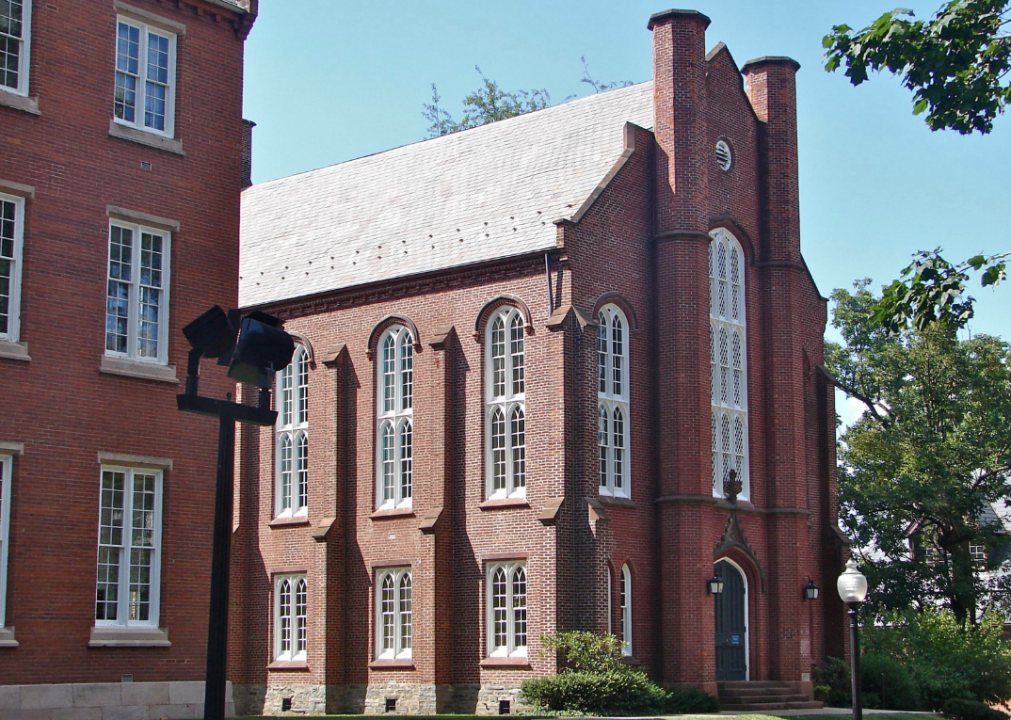 Originally named Franklin College in celebration of the iconic American thinker Benjamin Franklin, this Lancaster, Pennsylvania, school merged with Marshall College (named for Supreme Court Chief Justice John Marshall) in the mid-19th century to become Franklin & Marshall College. As Franklin College, the school became the first coeducational college in America all the way back in the 1700s, but soon after became a male-only institution and didn’t go back to admitting women until 182 years later. 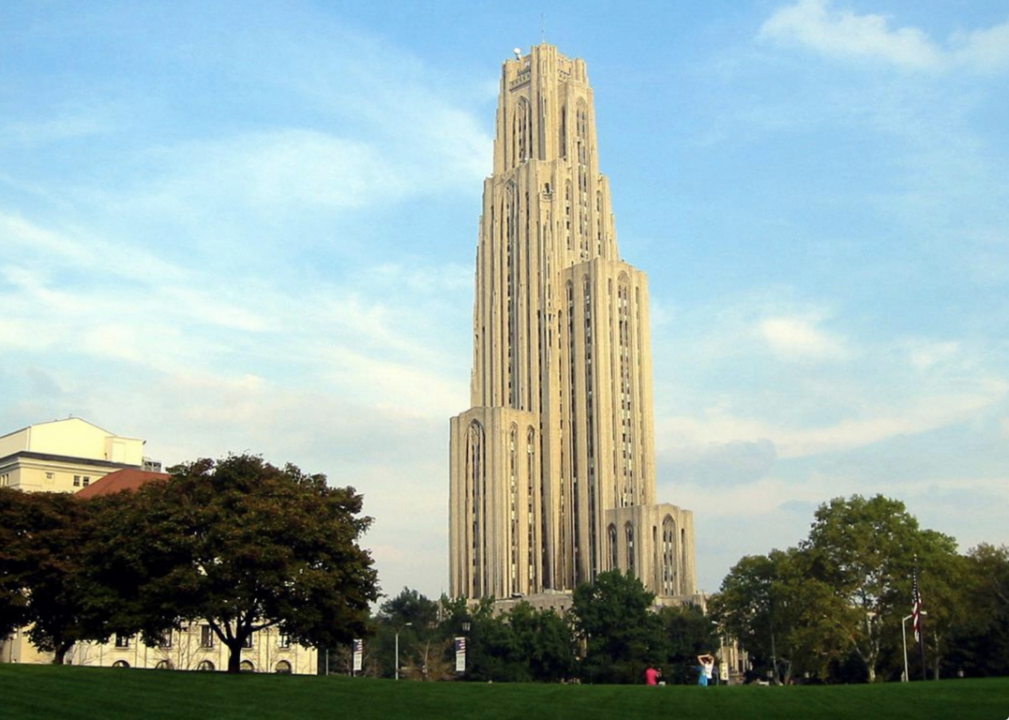 Originally founded as the Pittsburgh Academy, Pitt (as it’s now known) encompasses five total campuses with over 36,000 students. The original building was a log cabin, but by 1830 the school had grown to fill a three-story building in downtown Pittsburgh. Among the school’s famous alumni are novelist Michael Chabon, quarterback Dan Marino, and actor Gene Kelly. 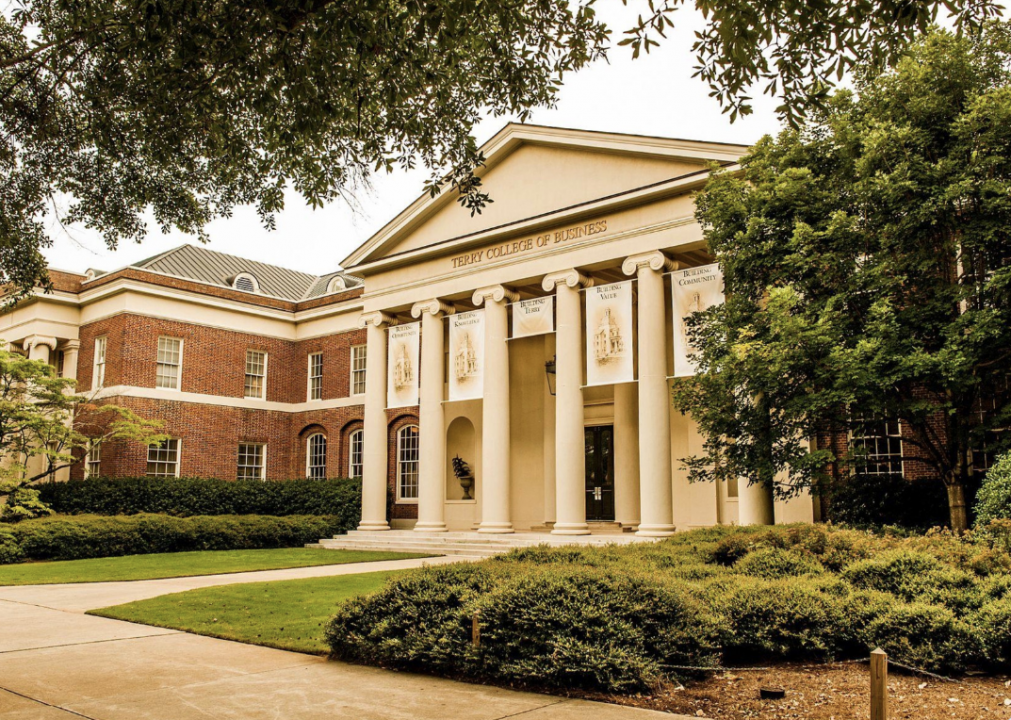 In 1784, 40,000 acres were set aside for an institution of higher learning by Georgia’s General Assembly, but the University of Georgia wasn’t officially established until 1801 when the final 633-acre parcel was selected in northeast Georgia. The university now boasts 17 schools and colleges. One part of the university that hasn’t changed for 160 years is the cast-iron arch that divides UGA’s Athens campus from the town itself. 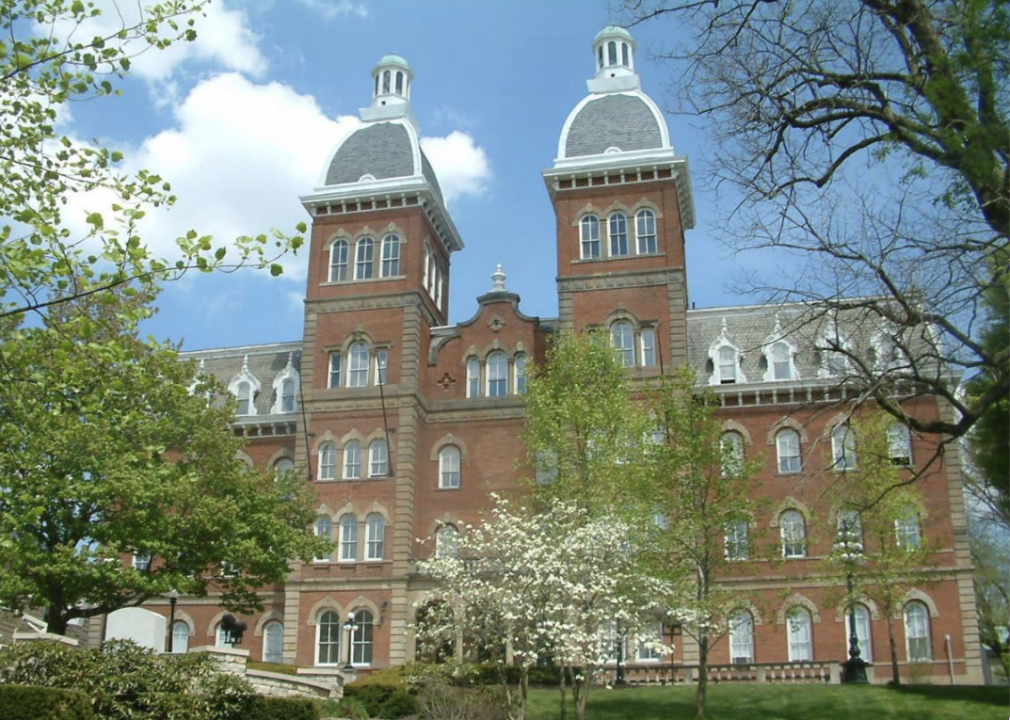 Just after the American Revolution, Washington College formed in 1781 by combining three log cabin schools. During the Civil War, the school in Washington, Pennsylvania, merged with Jefferson College to become Washington & Jefferson College, a small liberal arts school with over 1,400 students. One of W&J’s biggest claims to fame is an appearance in the 1922 Rose Bowl—and the distinction of being the smallest school to ever play in the game with just 450 students (they played the University of California to a 0-0 tie). 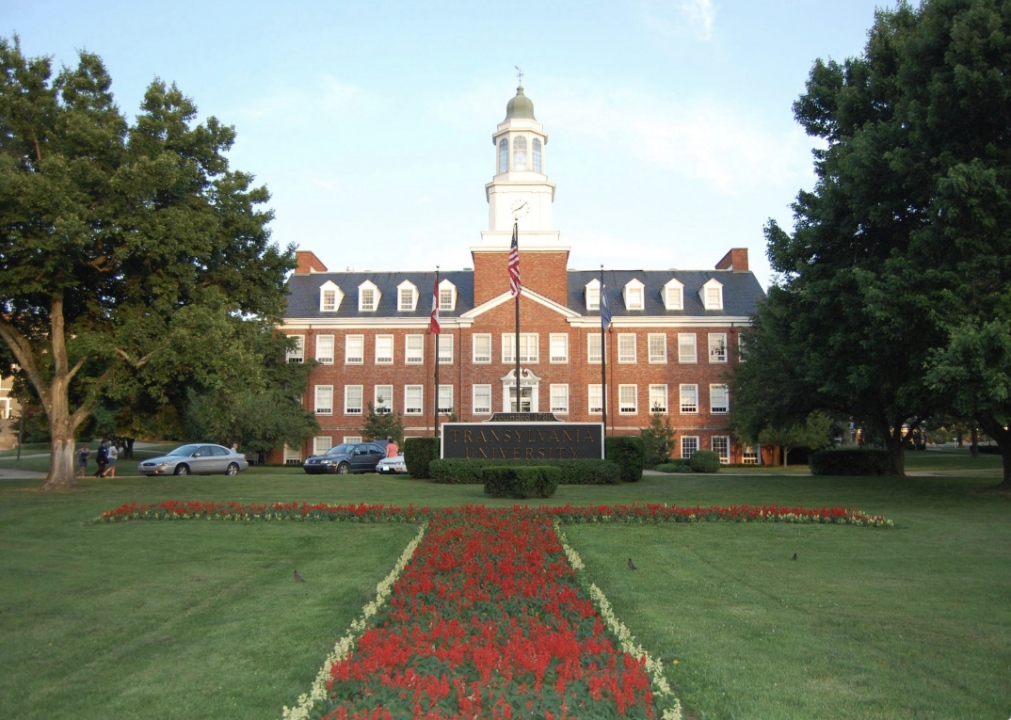 Transylvania University may not hold the esteem it used to, but it counts a number of famous and influential alumni, including multiple U.S. vice presidents (John Breckinridge and Richard Johnson) as well as Supreme Court Justice and notable Texan Stephen F. Austin. “Transy” is located in Lexington, Kentucky, and served as the first American college west of the Allegheny Mountains. 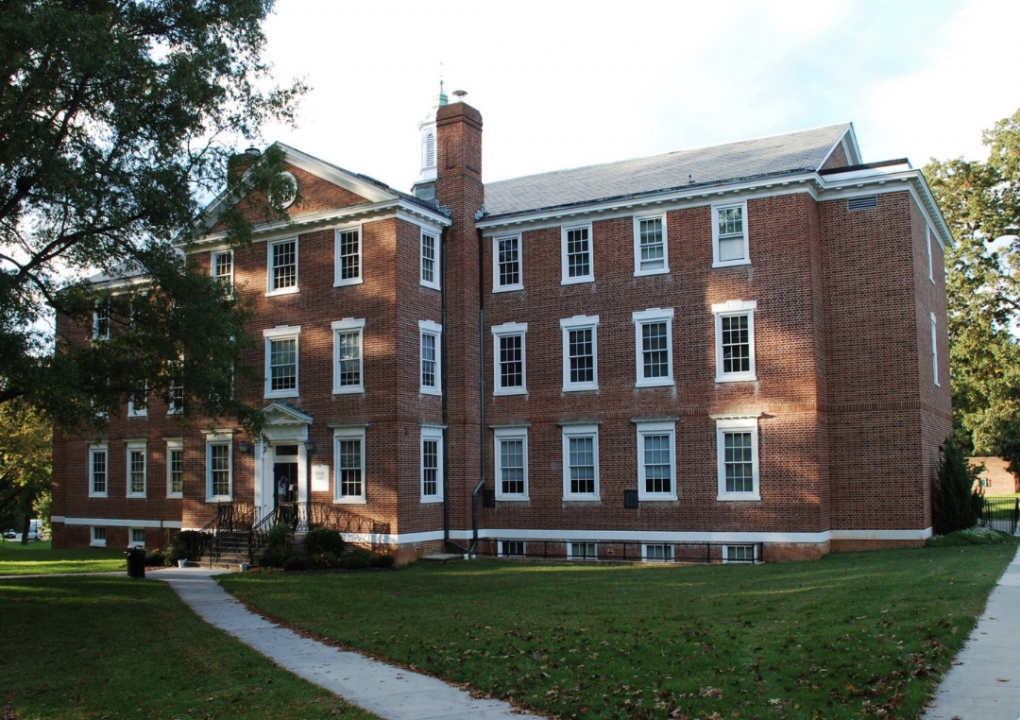 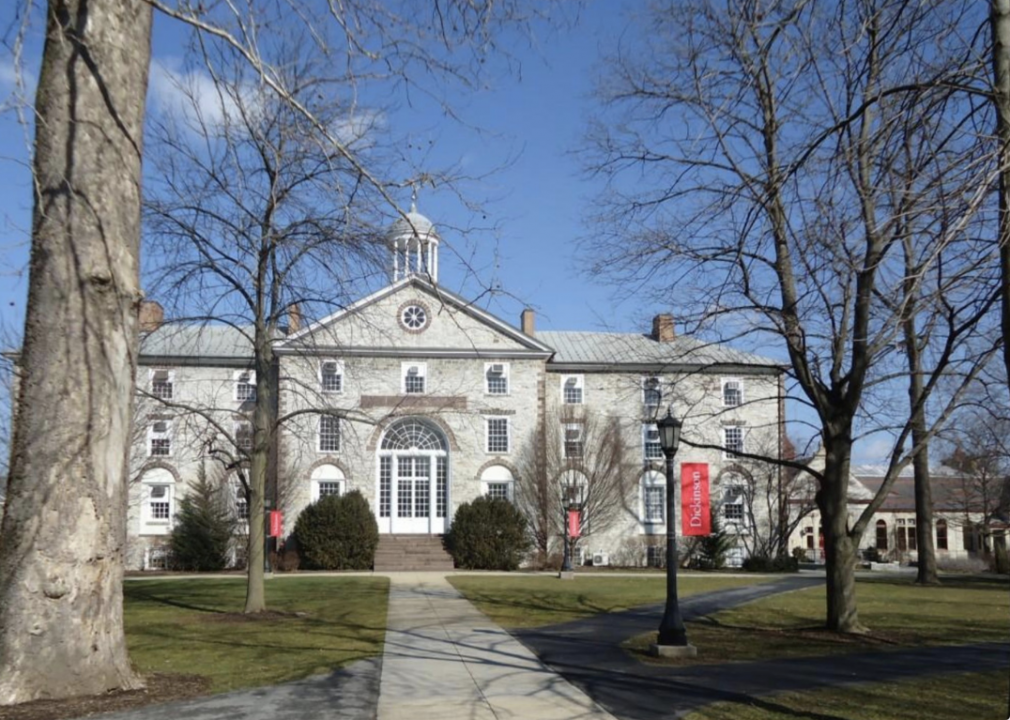 The Carlisle Grammar School in Carlisle, Pennsylvania, was the progenitor of Dickinson all the way back in 1773. A decade later, Declaration of Independence signer and physician Benjamin Rush turned the small-town school into Dickinson College on what was then the American frontier, making it the first truly American college. The college offers around 45 majors and prides itself as a leader in sustainability education. 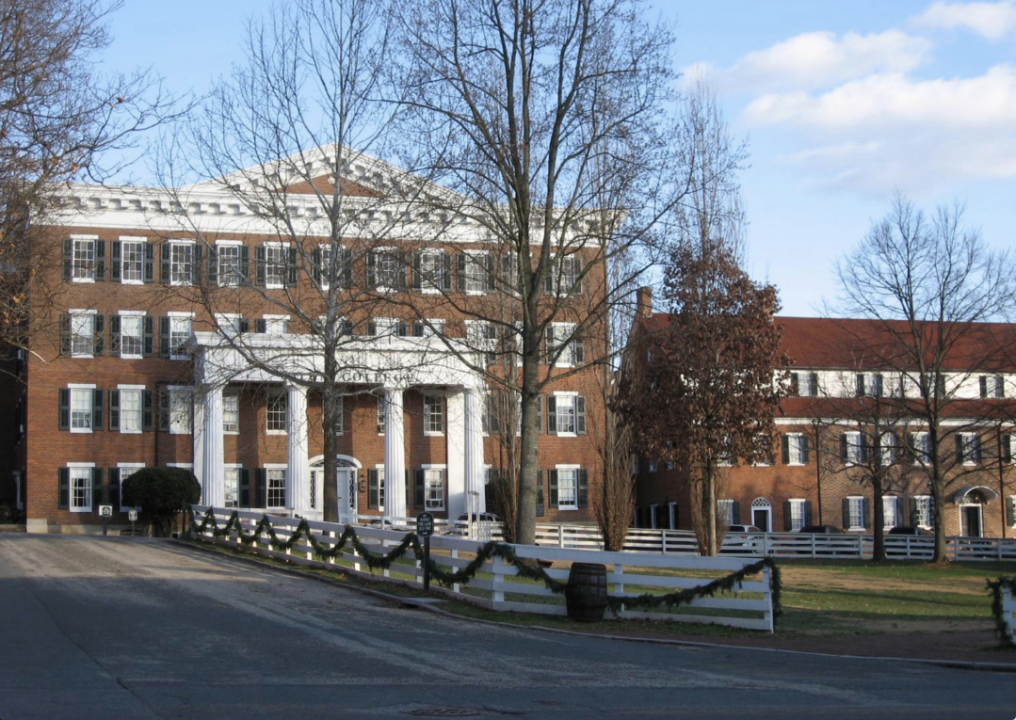 The oldest women’s college in the United States still operates on a single-gender basis nearly 250 years after its founding. Located in Winston-Salem, North Carolina, the school was a trailblazer in early American civil rights, with admission granted in the late 1700s to both African Americans and Native Americans. 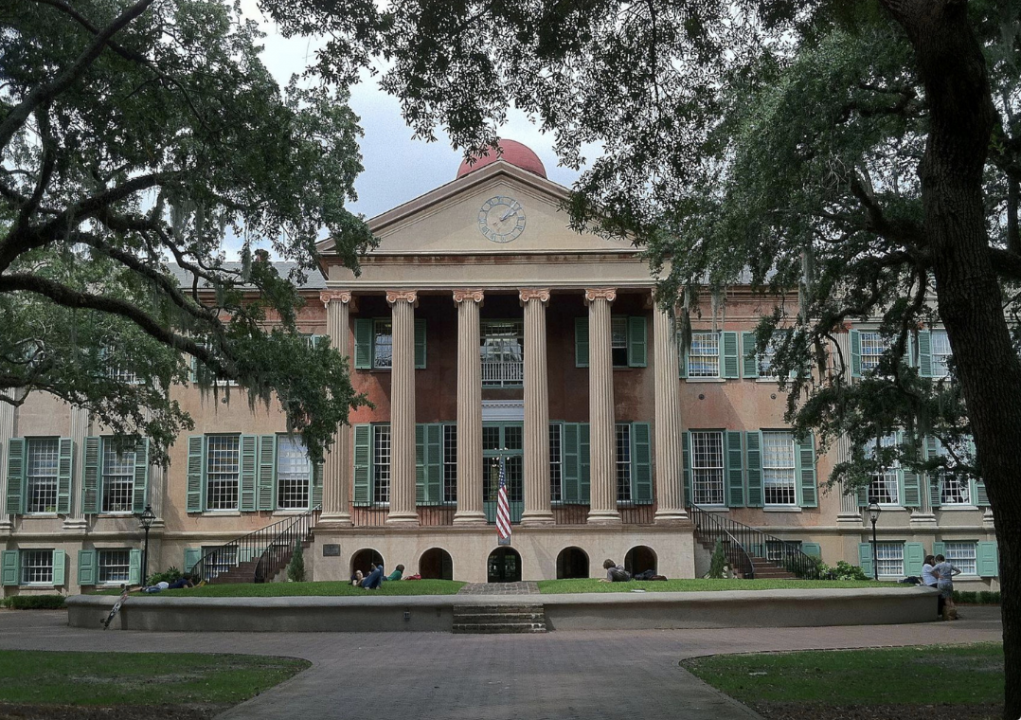 The College of Charleston holds the distinction of being the oldest educational institution south of Virginia. While the American Revolution delayed its development, the school officially received its charter in 1785. In 1837, the school became the first municipal college in the nation as the city of Charleston, South Carolina, took on the responsibility for operating the institution. It’s now under state control with enrollment increasing more than 1,000% since 1970. The only non-university member of the Ivy League, Dartmouth College was actually founded for “the education and instruction of Youth of the Indian Tribes in this Land,” as well as young people of other ethnicities. Based in Hanover, New Hampshire, Dartmouth boasts several famous alumni throughout its long history, including Daniel Webster, Theodor Geisel (aka Dr. Seuss), and poet Robert Frost. 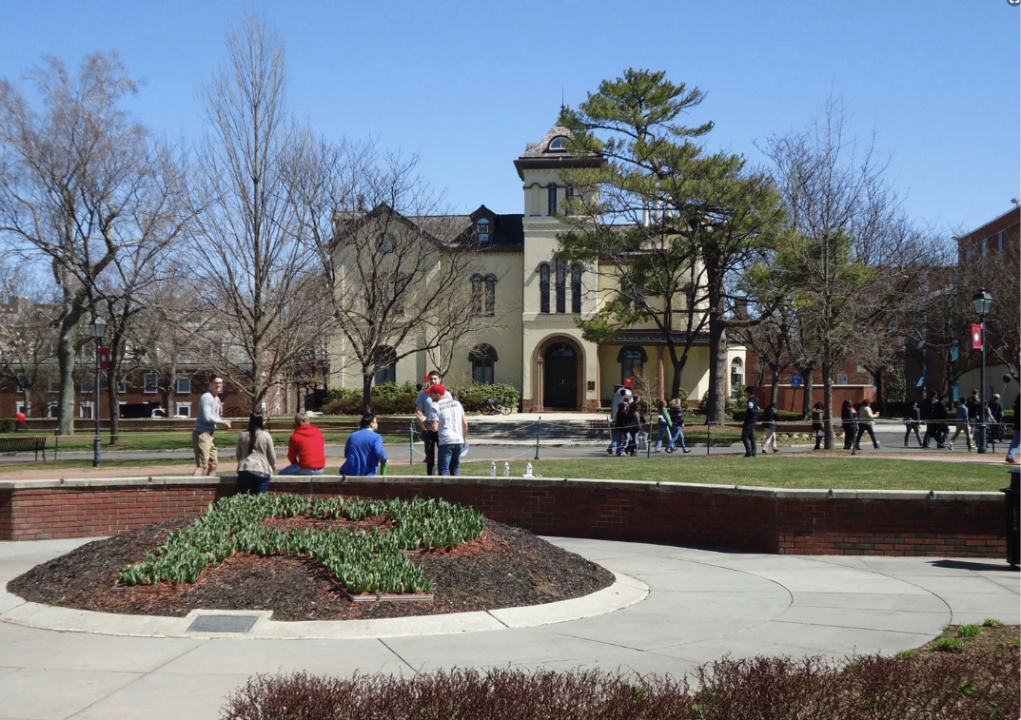 Rutgers is officially designated as The State University of New Jersey (its home is New Brunswick) and was first chartered as the all-male Queen’s College back in 1766. The name was changed in 1825 to pay tribute to Col. Henry Rutgers, a Revolutionary War veteran. Rutgers is one of the largest universities in the United States. 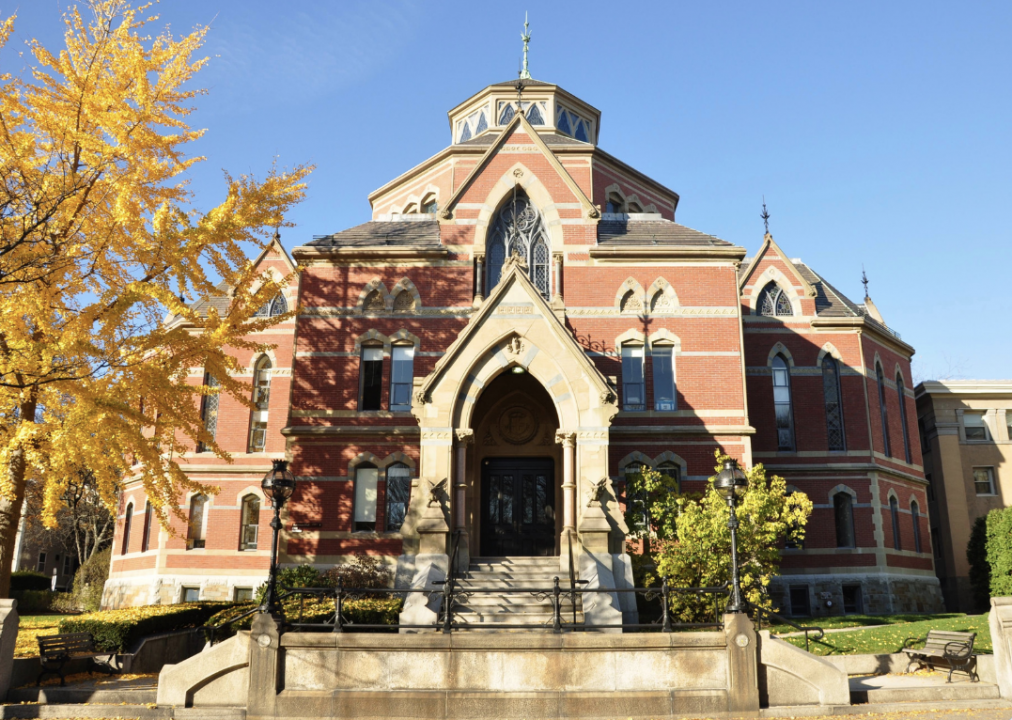 Brown has always prided itself on a spirit of openness and inclusion, as evidenced by the school’s decision to become the first Ivy League school to accept students of all religious persuasions. One of the first universities in New England, the school was initially located in Warren, Rhode Island, but soon moved to Providence in 1770. Media mogul Ted Turner, Federal Reserve Chair Janet Yellen, and political scion John F. Kennedy Jr. are just a few notable Brown alumni. 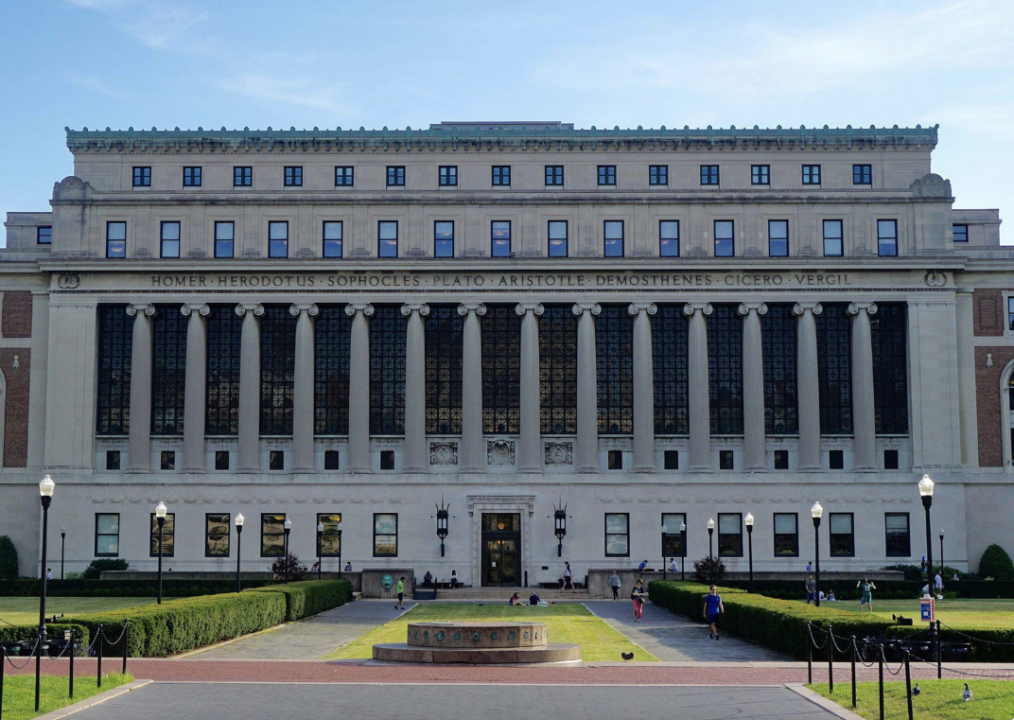 England’s King George II decreed the creation of King’s College by royal charter in 1754, and eight students attended the first class in what is now Manhattan. By 1767, the school had established the first American medical school to grant the M.D. degree. After the American Revolution, the school reopened as Columbia College, and has since become one of the best-regarded universities in the nation. Columbia is also a partner of Barnard women’s college, and the only Ivy League school in New York City. 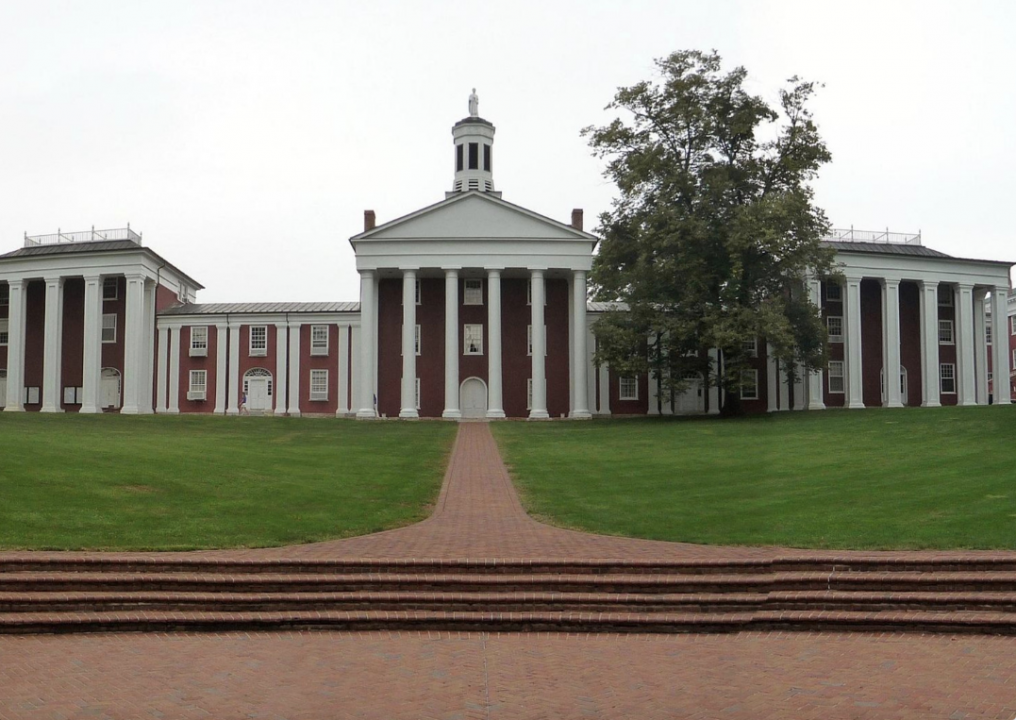 With a massive gift worth $20,000 in 1796, George Washington turned Liberty Hall Academy (founded as Augusta Academy in 1749) into Washington Academy—and subsequently, Washington College. During the 1860s, Robert E. Lee served as president of the school and lent his surname to create Washington and Lee University. The school still exists in Lexington, Virginia, as a small, private liberal arts university. 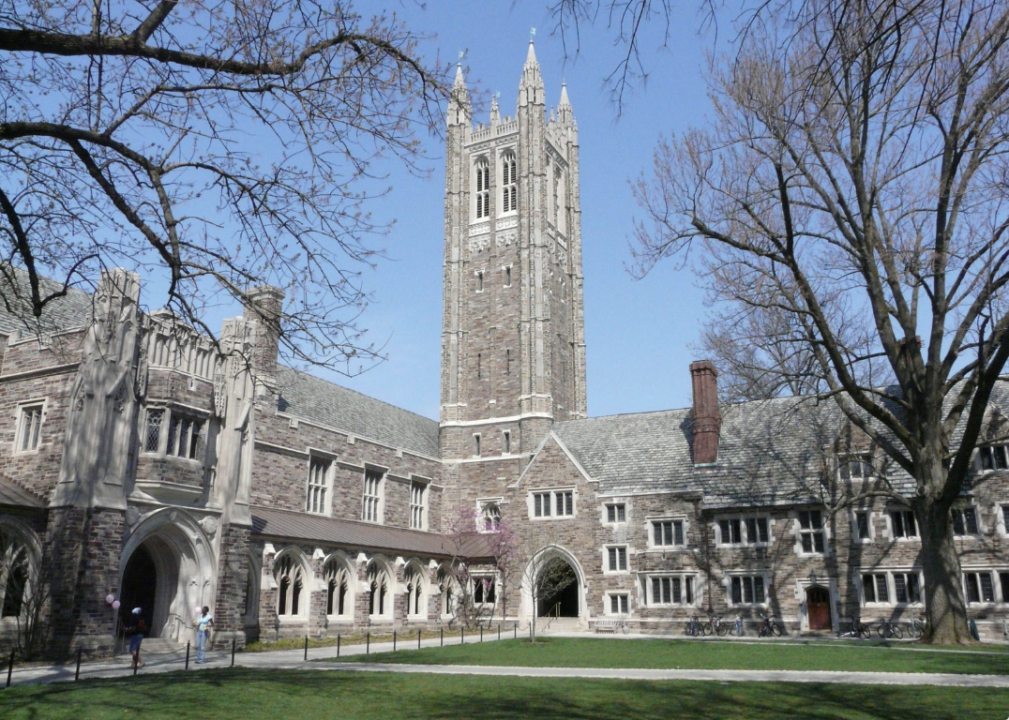 While many world-class universities named after cities reside in the major cities of the United States (New York University, University of Chicago and so on), Princeton University exists in the relatively small New Jersey town of Princeton, which boasts roughly 30,000 full-time residents. The school began as the College of New Jersey in 1746, then moved from Elizabeth to Newark in 1747. It moved once more to Princeton in 1756, where it’s remained. 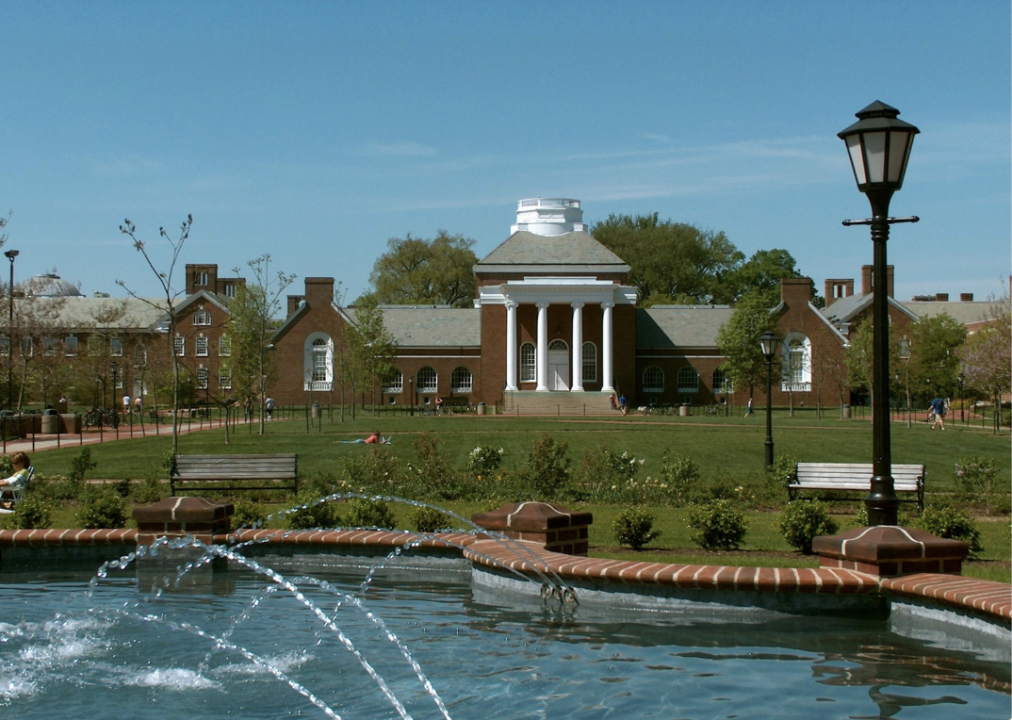 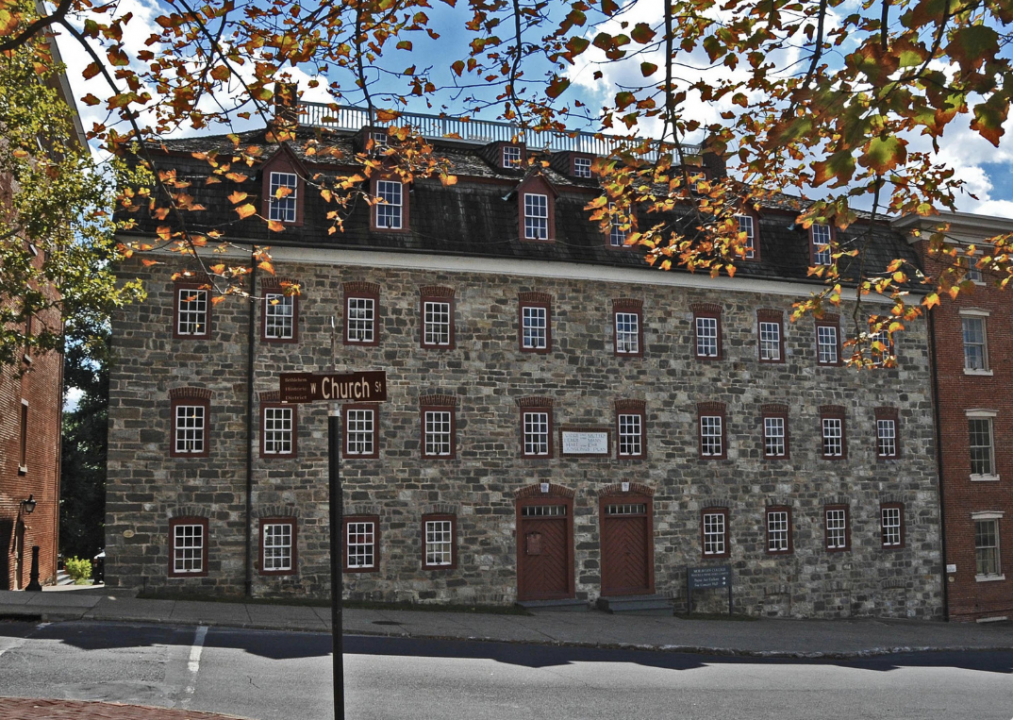 Bethlehem, Pennsylvania, has been home to both Moravian College & Moravian Theological Seminary for over 275 years. Not bad for a school started by 16-year-old Countess Benigna von Zinzendorf. While Moravia no longer exists (it was part of what is now the Czech Republic), their culture’s affinity for education continues at this tiny school with around 2,000 undergraduates. 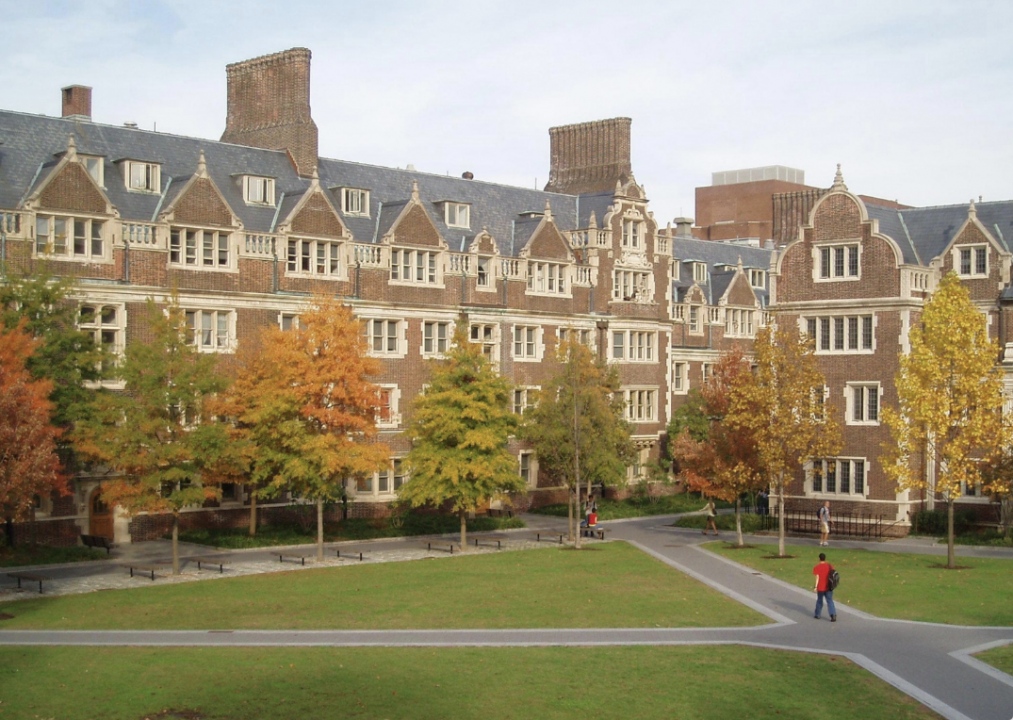 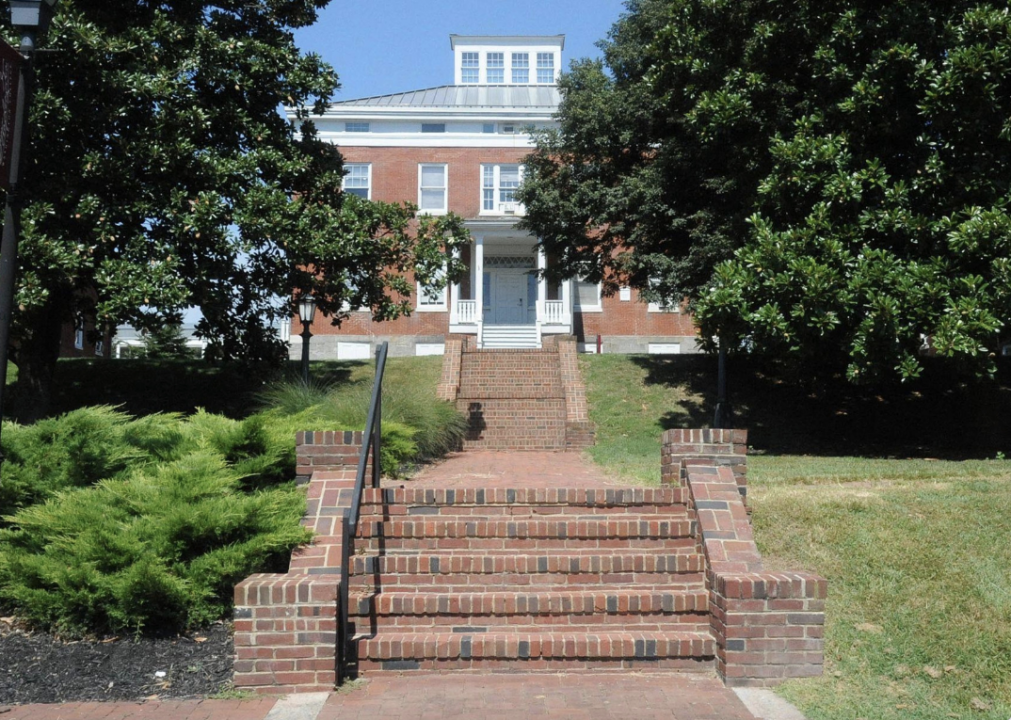 Washington College has resided on Maryland’s Eastern Shore in Chestertown since it was the Kent County Free School. Like many colleges of the day, the institution took the name of Gen. George Washington, who served on the board of the college until 1789 when he was elected first president of the United States. Today, the college serves more than 1,000 students from more than 20 different countries. 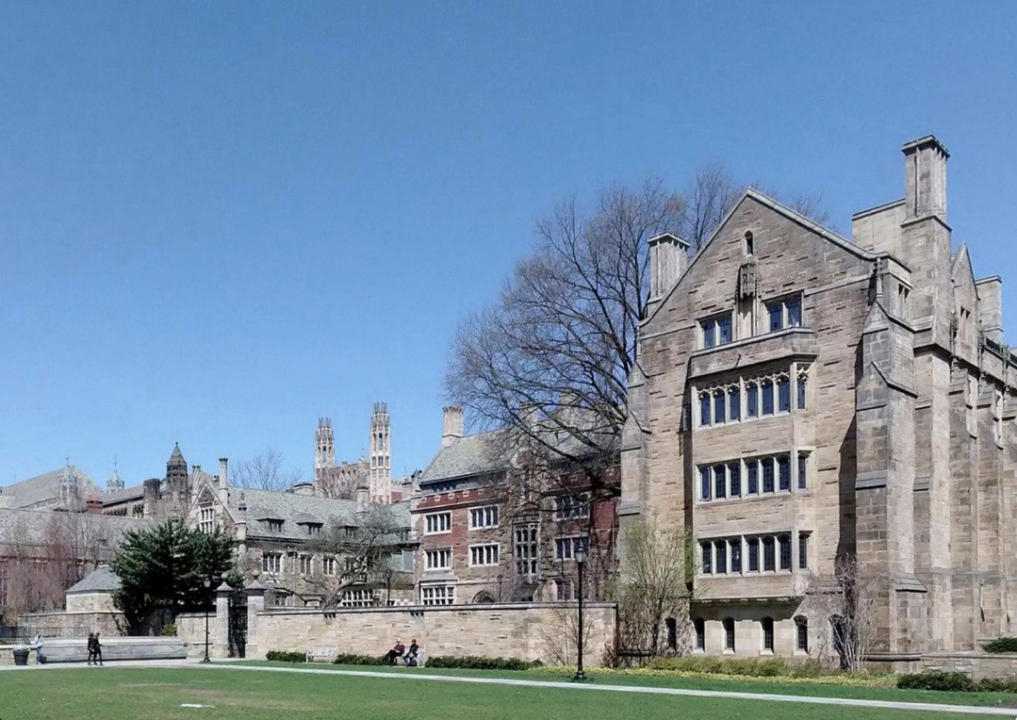 Now one of America’s most elite universities, Yale was founded in the small town of Saybrook, Connecticut, but moved to its home in New Haven in 1716. Two years later, the school was named Yale in recognition of Elihu Yale, a benefactor who donated books and goods to the nascent college. In terms of famous alumni, Meryl Streep, both Presidents George Bush, and cotton gin inventor Eli Whitney all received degrees as Yale Bulldogs. 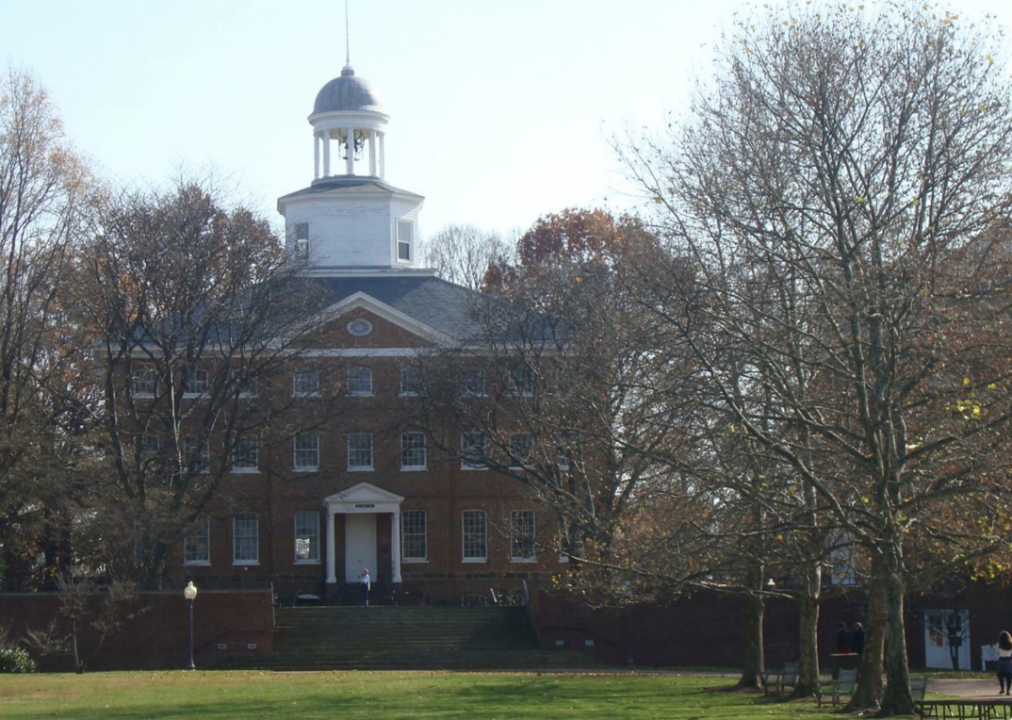 St. John’s College was founded in 1696 as King William’s School but transformed into St. John’s College in 1784 when the state of Maryland granted its charter. While the school didn’t emerge into an educational behemoth like some other early American institutions, it has grown to include a second campus in Santa Fe, New Mexico, far from its original Annapolis home. 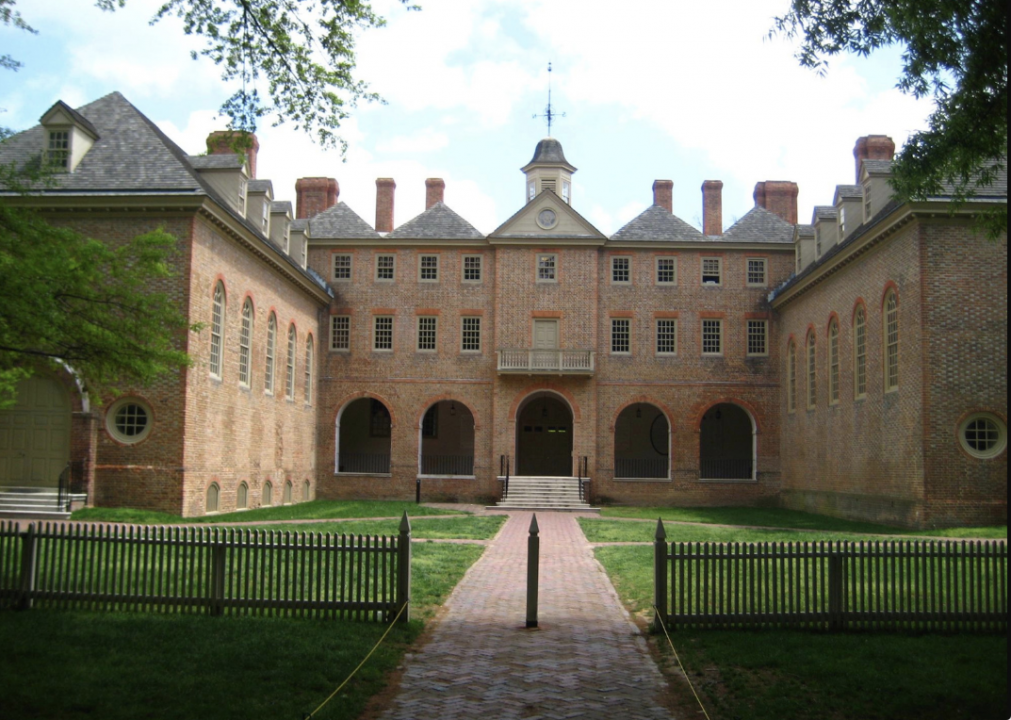 William & Mary would have claimed the top spot on the list, since it was supposed to open in 1618. Unfortunately, an uprising scuttled the plans and its founders had to settle for 1693 as its founding year with the very first royal charter. The college played an intricate role in the American Revolution, with George Washington himself earning a surveyor’s license from the school at the age of 17. The town of Williamsburg, Virginia, where it resides, took its name from the school (via the British monarch, of course) instead of the other way around. 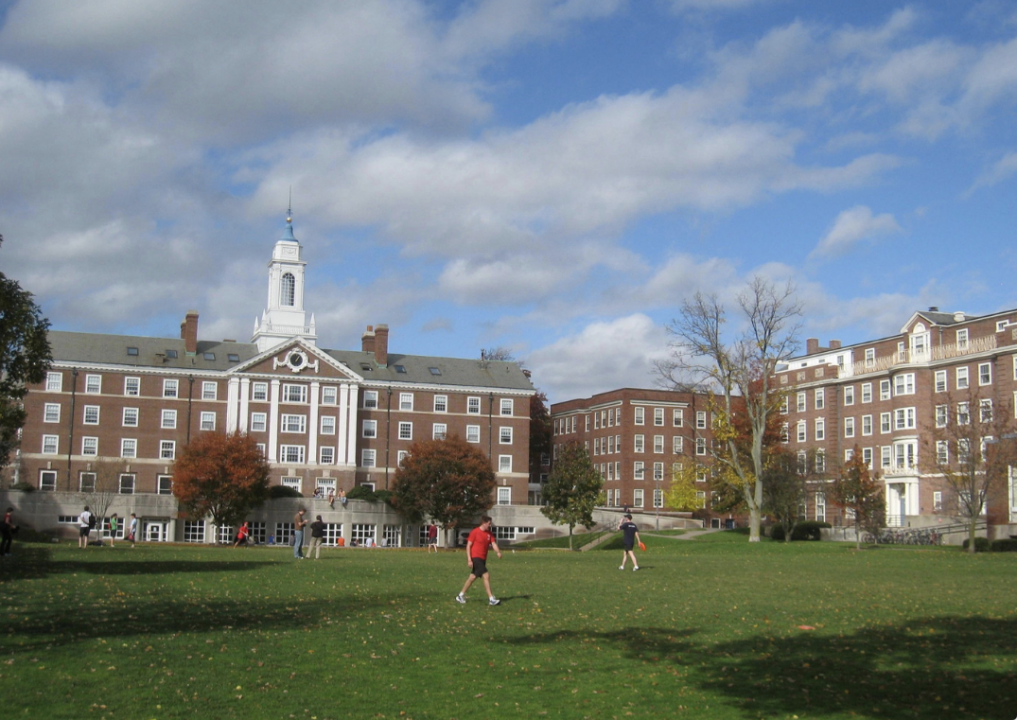 It’s fairly incredible that Harvard University in Cambridge, Massachusetts, is not only the oldest college in America but also widely regarded as the best institution of higher learning in the nation. Harvard alumni live in 190 countries around the world, and the university counts eight U.S. presidents among its graduates.