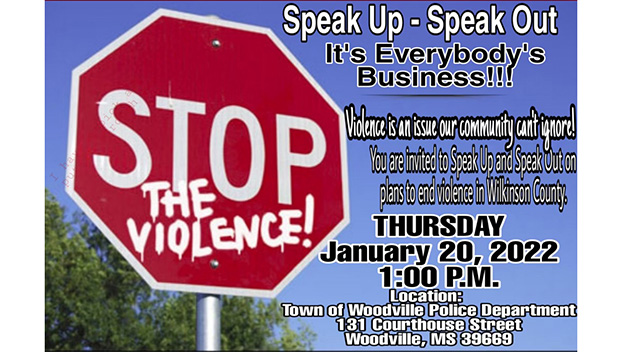 WOODVILLE — Officials have called on the public to voice their concerns about violence in the Woodville community after a woman was killed in her Wilkinson County home.

Judy White was killed during what appears to be a drive by shooting after 7 p.m. Monday on Dahl Road, Woodville Police Chief Lemuel Rutledge said.

Wilkinson County Sheriff’s Office is investigating the shooting and Rutledge’s officers assisted them.

In response to the incident, Rutledge said a community town hall has been organized and scheduled for 1 p.m. Thursday, Jan. 20, at the Woodville Police Department. A flyer he shared for the event asks citizens to come and “speak up and speak out on plans to end violence in Wilkinson County.”

Mayor Drew Pierson issued a statement about the shooting on social media, stating that a gunman drove by White’s home and fired approximately 25 shots through the house from the yard and street. One of the shots found White and killed her, Pierson said.

“Was it meant for her? I’m quite certain it was not,” he said. “I can’t tell you much about Judy, as I didn’t have the privilege of knowing her.  But I do know that she was a grandmother, mother, wife and friend to many. I heard from many last night at the scene how wonderful she was.  It is tragic that she and so many others have lost their lives like this, and it is something that should anger everyone in our community. Being an innocent victim because you’re at the wrong place and time or because of a relationship to someone, whether close or distant, is unacceptable.”

Pierson, along with law enforcement, also urge everyone with knowledge of what happened to use the Crime Stoppers hotline, 1-888-442-5001.

“Let’s start acting on our desire and use each of our personal influences to fight for peace in our community and stop the violence that is killing the innocent people,” he said.