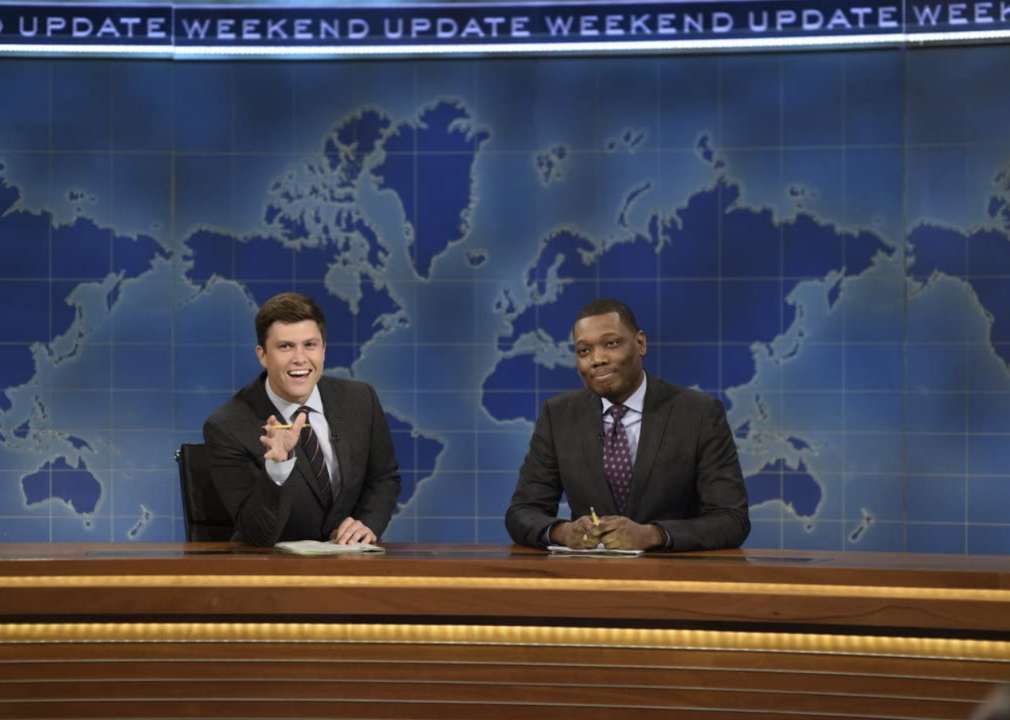 In 1975, when “Saturday Night Live” first hit the airwaves, the term “fake news” had a totally different connotation than it does today. Rather than being a politicized term used to discredit information you don’t agree with, it simply meant made-up stories with no real basis in fact. It was this sort of “fake news” that Chevy Chase, a member of “The Not Ready for Prime-Time Players” (the name the first “SNL” cast gave themselves), wanted to deliver on a segment he called “Weekend Update.”

The first-ever “Weekend Update,” which was a part of the first-ever “SNL” show, opened with the phrase, “And now the fake news.” For two seasons, Chase told jokes about the most outlandish and important news headlines (some real, some imagined), essentially paving the way for the various satirical news shows that dominate late-night TV today. “Weekend Update” remains a core segment on “SNL” some 47 seasons later, though the comedian delivering the fake news report has changed a number of times.

In honor of the groundbreaking bit, Stacker has compiled a list of the 10 longest-running “Weekend Update” hosts by episode count. From Jane Curtain (who took over for Chase) to the current fake news duo Colin Jost and Michael Che, we’re taking a closer look at what’s set these anchors apart and highlighting some of their funniest on-screen moments.

You may also like: Award-winning TV shows that ended in controversy 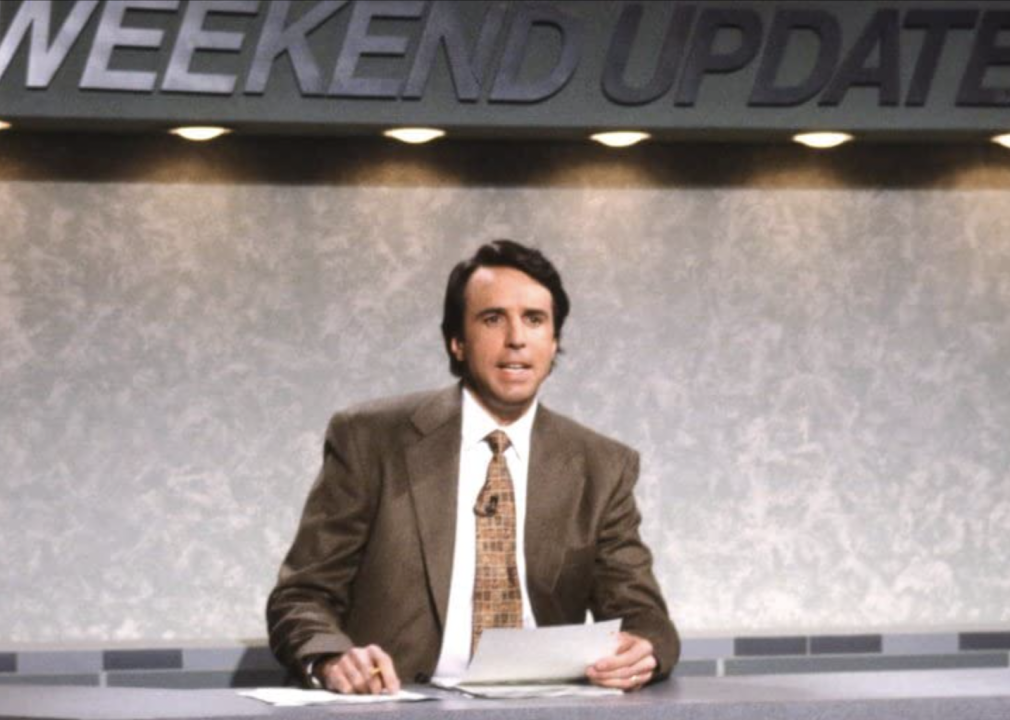 Kevin Nealon was a core member of the “SNL” cast for nine seasons. He spent four years behind the “Weekend Update” desk, where his dry wit and chemistry with other cast members were given a chance to shine. Fans of the show are sure to remember his banter with Adam Sandler, who frequently popped into the segments as an assortment of goofy characters.

While there were plenty of high moments with Nealon behind the desk, there were low ones as well—Nealon frequently flubbed his lines, which often resulted in the punch line of a joke falling flat or being skipped entirely. In the end, Nealon told “The Last Laugh” podcast he left the show, and his hosting job, because he was “forced out” by the creators, but admitted they weren’t totally unwarranted for wanting him gone, as he had gotten a bit “lackadaisical” about his work. In a round-up of the best “Weekend Update” anchors, “Entertainment Weekly” declared Norm Macdonald top dog. Though he only sat in the host’s chair for three years, Macdonald stands out because he cared so little about what the audience thought of him.

His style has been described as “deadpan, just very straight, no frills,” and making the audience laugh never seemed to be a concern for him—if a bit didn’t land, it was the audiences’ fault, not Macdonald’s. That doesn’t mean the comedian wasn’t funny, quite the opposite in fact. His running gags—like the one about Germans loving David Hasselhoff—often left the audience in tears. 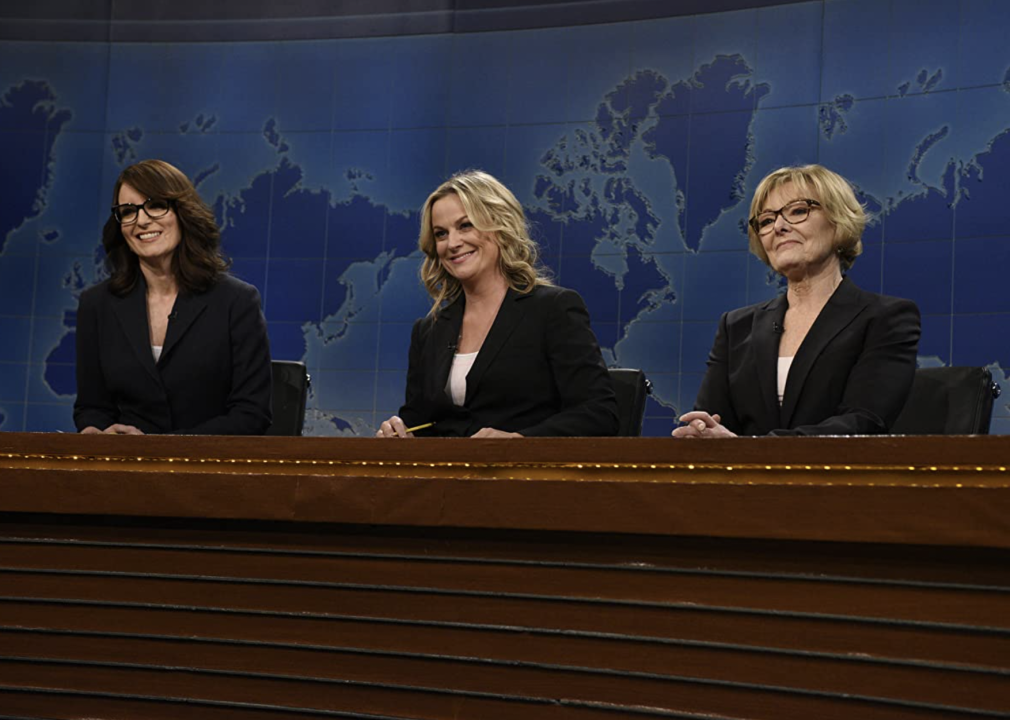 The second-ever “Weekend Update” host, Jane Curtin is best remembered for being the straight man to her co-hosts’ (Dan Aykroyd and Bill Murray) eccentric characters. Although she wasn’t typically the one causing the biggest laughs, Curtin told “Deadline” she loved the gig because it kept her from competing and meant she “didn’t have to fight for material.”

Fans loved the “Point/Counterpoint” bits she contributed to, one of which spawned the iconic line, “Jane, you ignorant slut!” Despite the fact that the line, and quite a bit of the humor on “SNL” in general, hasn’t aged well, Curtin maintains that she was never offended by the sexist undertones. That being said, she admits the line “still haunts” her. 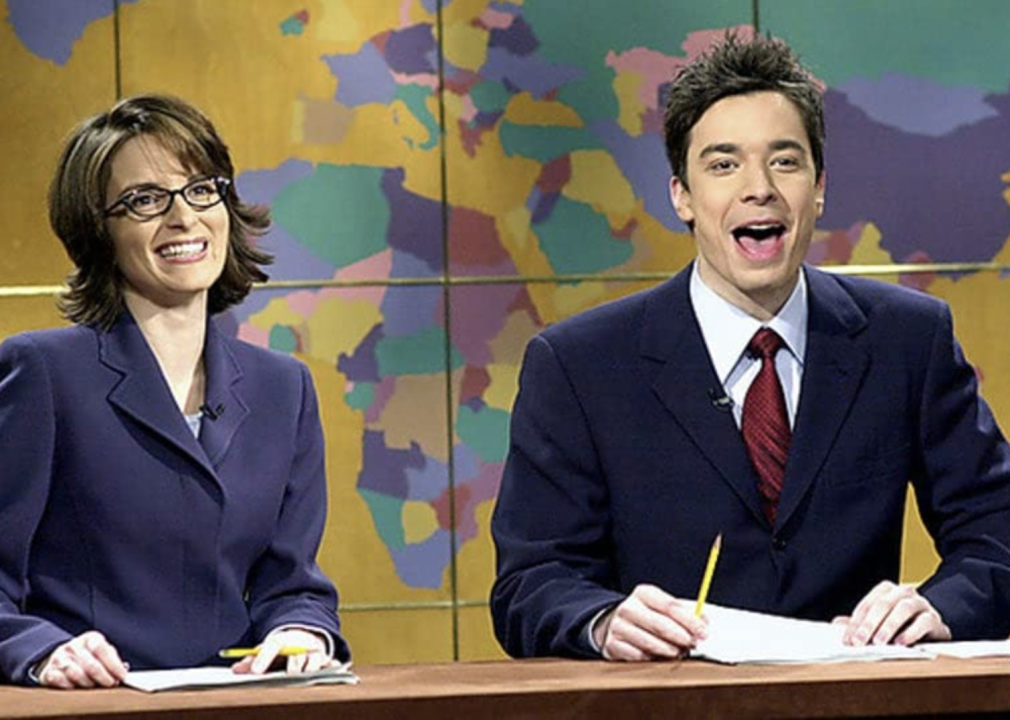 As far as “Weekend Update” hosts go, Jimmy Fallon was a fairly divisive one. Fans of the show either loved his joyful, almost juvenile, sense of humor or hated how often he broke character, ruining the fluidity of the joke in progress. Regardless of what side of the line you fall on, it’s impossible to deny that Fallon’s hosting stint helped revive the segment.

In the ‘90s, “Weekend Update” had become heavily political, but when Fallon and Tina Fey took over in the early 2000s, it returned to the lighthearted bit it had been before. While behind the desk, Fallon frequently did impressions of various celebrities and public figures. One of these impressions, which was done in blackface, recently resurfaced and got him in quite a bit of trouble, though he has since apologized. 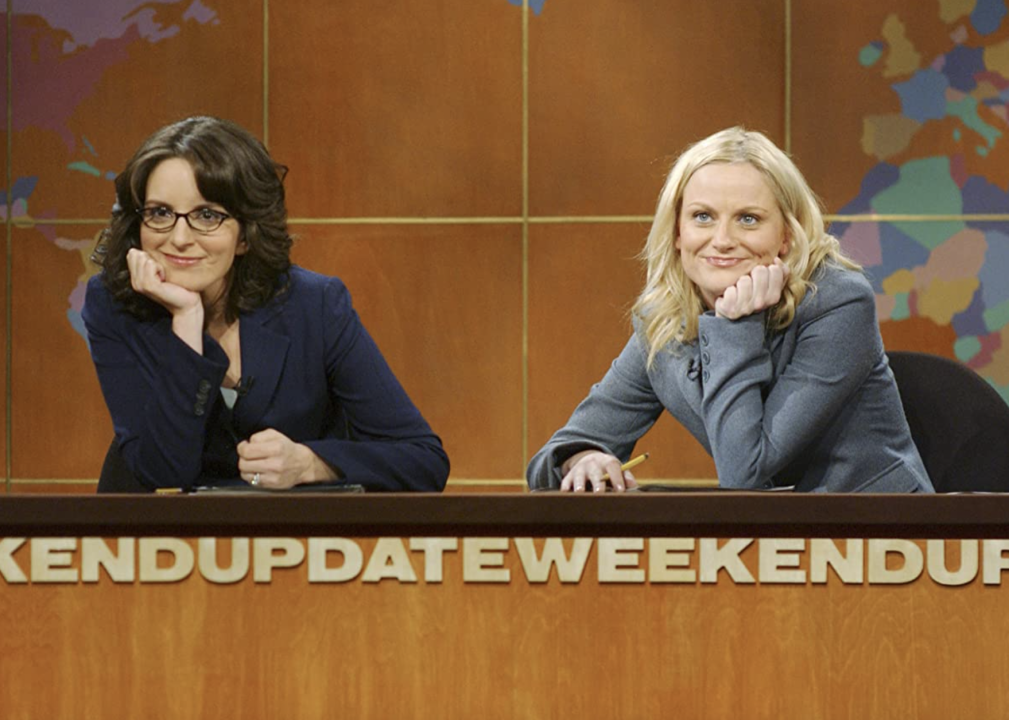 One-half of the first all-female “Weekend Update” team, Amy Poehler joined longtime buddy Tina Fey behind the desk in 2004. The bold, brash duo is consistently regarded as one of the segment’s best pairings of all time. This is due, in large part, to the incredible chemistry they shared and the effortless way they played off of each other, bringing jokes literally (and figuratively) to the next level.

A few of Poehler’s most memorable “Weekend Update” bits include an attempt at mentoring Lindsay Lohan and the “Bitches Get Stuff Done” sketch that became a sort of “feminist rallying cry” according to Vox. Poehler’s charisma behind the desk, and on “SNL” in general, helped convince the show to include more female-driven sketches. 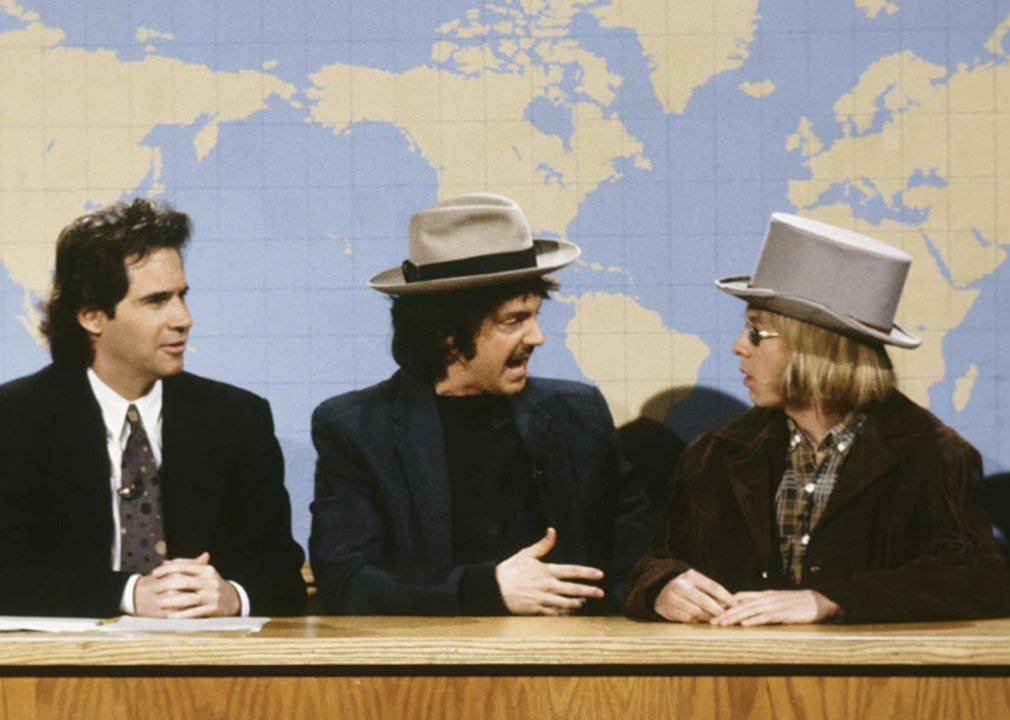 Although he doesn’t get nearly the same level of recognition as other “Weekend Update” hosts, Dennis Miller was one of the segment’s longest-lasting and most memorable anchors. He brought his own unique brand of fiery, cynical humor to the bit, playing up the political aspects of the news stories to extra laughs. Viewers will remember his frequent long-winded rants, and the debates he had with himself (where he’d argue both viewpoints from opposite angles of the desk).

Unlike other anchors, he often shared his personal opinions about the stories he covered, rather than sticking to pre-existing scripts and more anonymous opinions. Miller proved so adept at this type of role, that he eventually left the comedy series for his own late-night talk show, “The Dennis Miller Show.” 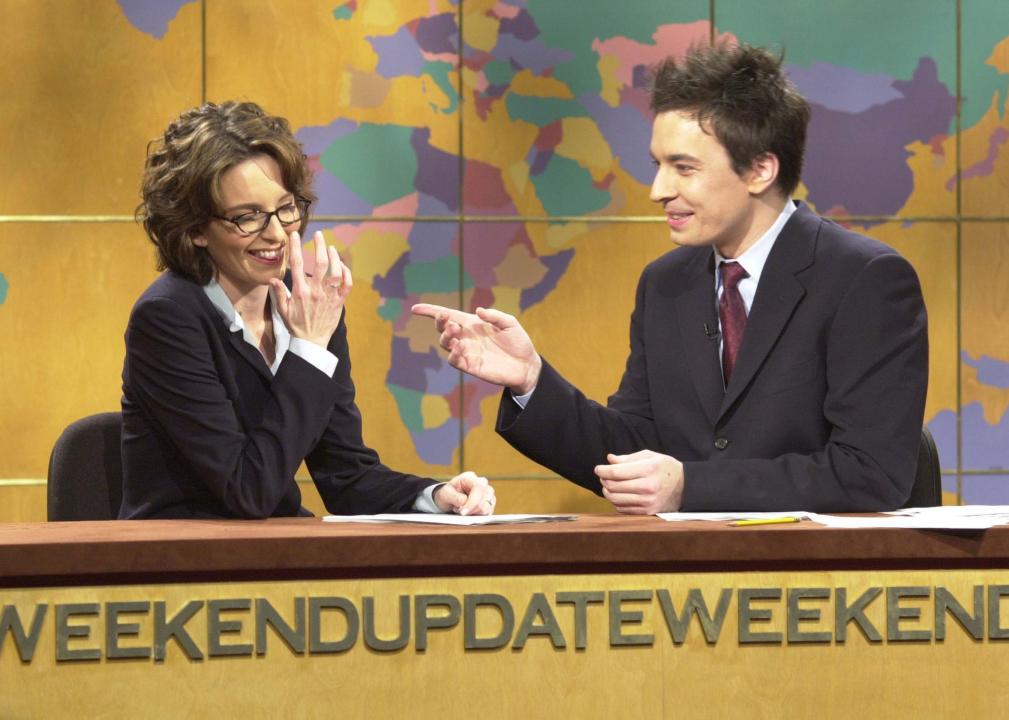 The longest-running female “Weekend Update” host, Tina Fey began the tradition of writers moving into the head anchor chair. While she never ran the desk solo (she was paired with both Jimmy Fallon and Amy Poehler), she still managed to carve out her own distinct place in the segment’s history thanks to her unique, and hilarious, deadpan style.

Fey’s jokes were often fully packed—a single sentence would have the audience laughing at three or four spots—and never shied away from the controversial. Following one particularly barbed joke about then-president George W. Bush, Entertainment Weekly’s Ken Tucker wrote of Fey, “that [she] ​​delivers such blow darts —poison filled jokes written in long, precisely parsed sentences unprecedented in ‘Update’ history—with such a bright, sunny countenance makes her all the more devilishly delightful.” In 2006, Fey departed “SNL” in order to work on “30 Rock.” 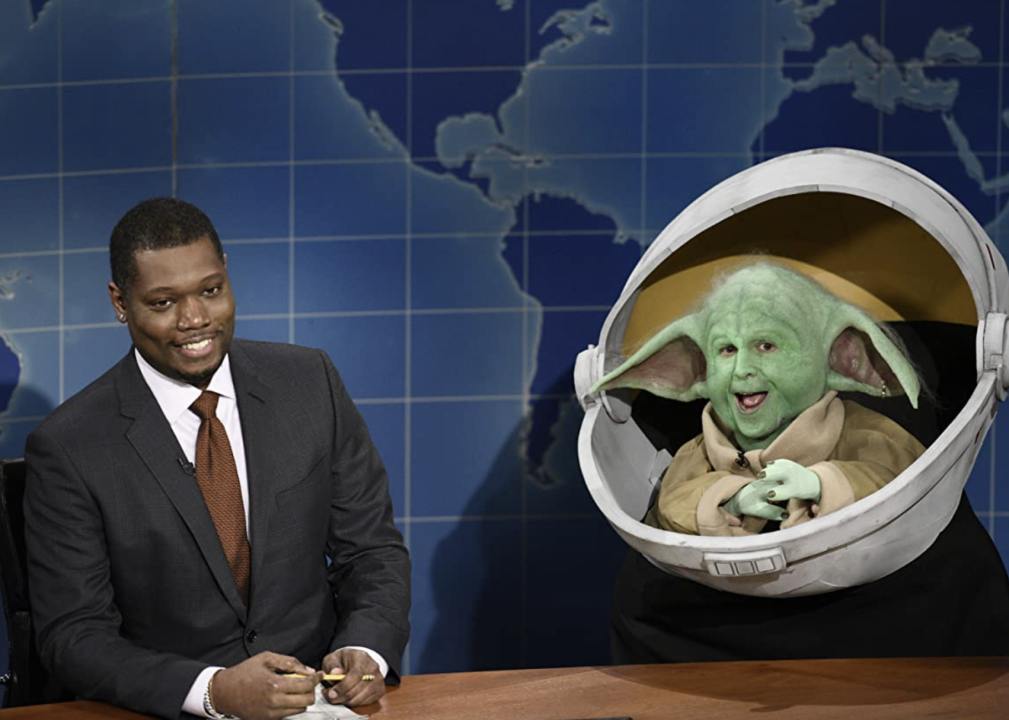 Michael Che is the show’s first Black head writer and “Weekend Update” host. Throughout his tenure at the desk, Che has always co-anchored with Colin Jost, a pairing that seems good in theory but never has never been as big of a hit with audiences as, say, Fey and Poehler or Aykroyd and Curtin. While both men are brilliant comedians in their own right (Che, in particular, shines when the script allows for more standup-esque jokes), they haven’t managed to find the same chemistry as other duos.

That being said, many of their regular bits, like the one where Che writes racist jokes for Jost to read, regularly have the audience in stitches. At the end of 2021, Che and former host Tina Fey delighted audiences when they hosted an impromptu Christmas time “Weekend Update” segment together. 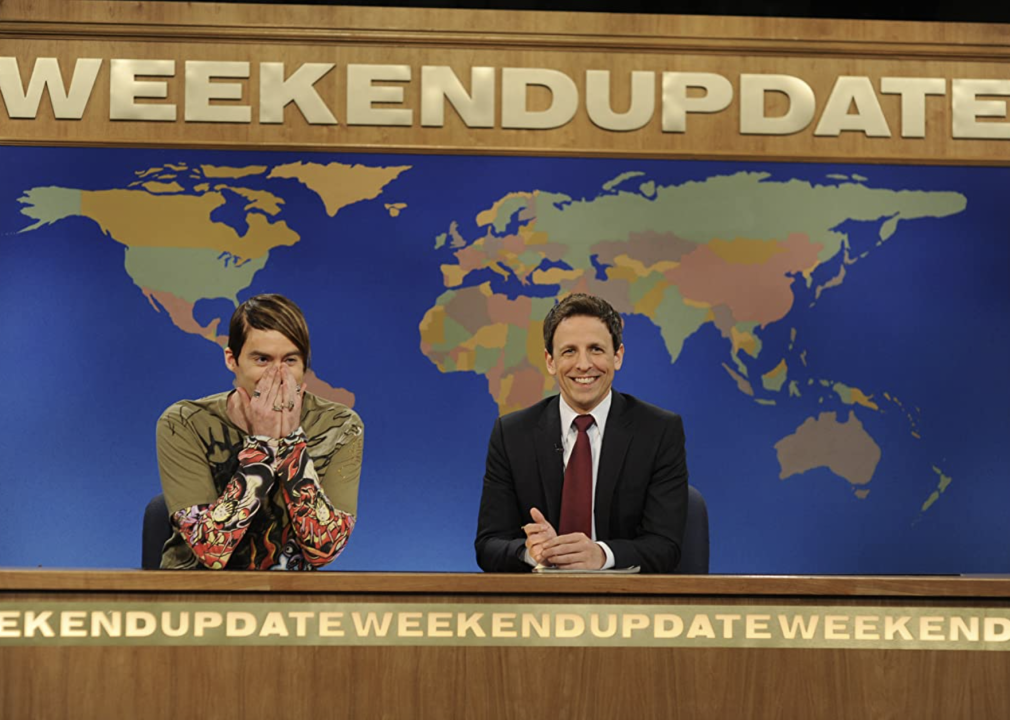 Seth Meyers did the segment solo (from 2008–2013) and with a partner (Amy Poehler and Cecily Strong) at various points, illustrating that no matter the situation, his brand of humor was perfect for the job. A straight man like Jane Curtin, many of Meyer’s perfectly executed jokes were reactions to more eccentric characters like Bill Hader’s club-loving Stefon.

Another particularly memorable bit was the “Really!?!” routine Meyers would regularly run with Poehler, where the two would read outlandish headlines and respond with a simple, sarcastic “really!?!” In 2014, Meyers left “SNL” and “Weekend Update” behind to host “Late Night with Seth Meyers.” Finally, the title for the longest-running “Weekend Update” host currently belongs to none other than Colin Jost. Toward the end of 2021, Jost claimed the crown from Meyers, having hosted 155 (and counting) segments. Despite his long tenure, many viewers aren’t the biggest fan of Jost, citing his derivative comedy style or “very punchable face.”

Still, when he’s bantering with Che or reading out the racist jokes his co-host has written for him, there’s no denying Jost (a writer himself) is genuinely funny. Rumors have been swirling for years that Jost is preparing to leave “SNL,” but as of this writing they have never been confirmed, meaning we can expect to see him behind the news desk for seasons to come.

You may also like: Can you answer these real ‘Jeopardy!’ questions about TV shows?