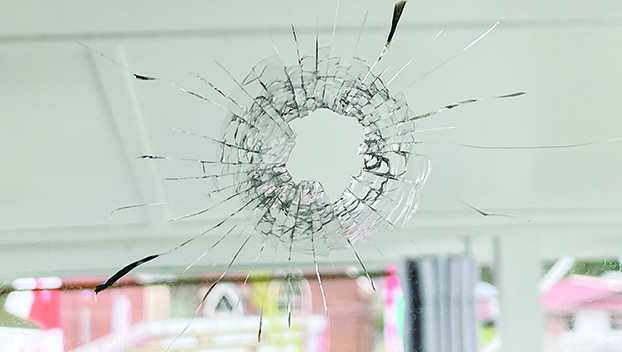 A bullet carved a hole into the window of Michael Boykin's home. (Submitted photo)

Michael Boykin loves Natchez. He moved here about a decade ago and has spent untold dollars on renovating and furnishing a historic home. He is as involved as he can be in a variety of civic groups.

But Boykin is frustrated and concerned about crime near his home and the seeming inability of Natchez city and law enforcement officials to curtail it.

“I think Natchez is dangerous. I think it has crossed that line. This is a dangerous place to live. I could be shot and murdered in my house. It would be news for a day or two and it would be forgotten,” said Boykin, who lives on North Rankin Street. “Let that happen to a child at (a nearby school) or a tourist. That will decimate Natchez.”

Boykin was reacting to a rash of three consecutive days of shootings and crimes that took place near his home — and one at his home on Jan. 11 — including the shooting death of Antonia Foster, who was found in the 500 block of Oak Street.

In the last few years, Boykin said he has called 9-1-1 “three or four times a week” to report loud music and gunshots near his home.

“I knew it irritated them, but they told me to continue to call,” he said. “It got to a point back in October where I stopped calling. It wasn’t doing any good.”

Boykin said he ran into Natchez Mayor Dan Gibson at a Christmas party, and the mayor commented on the issue near Boykin’s North Rankin Street home.

“It’s nothing bad against the police department, but why waste their resources when they may be dealing with another catastrophic thing in Natchez, to come deal with things over here, particularly when it does no good?

“I’ve told them (police) I’m going to wind up dead because I will get shot and killed in my own home. Guess what, that’s what happened. I just didn’t get killed.”

On Tuesday, Jan. 11, Boykin was in his home and had gone to bed. At about 11:17 p.m., he heard what he thought sounded like glass breaking. He got up and briefly investigated, but found nothing.

The next morning, Boykin went downstairs and saw that one of the Portuguese pots in his garden was broken. Upon further investigation, he saw what looked like a bullet hole in it.

“At first I thought it had shattered from the cold. Then, I looked up and saw a bullet hole through one of my French doors,” he said.

The bullet that shattered his planter outside came through a window and hit the back of his television. The second bullet, which came through the French door, hit a painting, a fragment of which is still lodged in the painting.

“I can’t take my trash out at night or I get harassed. I routinely see people defecating and urinating behind that dumpster,” referring to a dumpster at the Zipy Food Store, located at 320 N. Martin Luther King Jr. St., which Boykin said is the source of crime in the area.

“There is the root of the problem. We allow people to hang out at that Zipy all hours of the night. It is an open bar. It is a bar that masquerades as a convenience store. Same thing goes with the Shop N Save across from Cathedral. It doesn’t need to be selling beer near that school,” Boykin said.

“It’s all that milling that goes on. That’s the main problem. In my heart of hearts, I know that’s the root of the problem in this area. Those stores. I know what I see and hear. We hear ambulances, fire and police here every night. They are making lots of noise, but not getting anything done.”

“I think they cover as much of Natchez as they possibly can. I was not going to harass them any more by calling 9-1-1. Now it’s changed. It’s gotten personal,” Boykin said.

The Mayor and the Board of Aldermen’s law enforcement committee, along with Natchez Police Department leadership and City Attorney Bryan Callaway have met to discuss ways to address what are considered nuisance businesses.