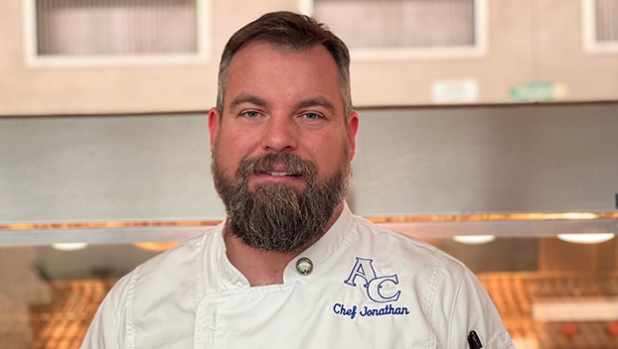 The cafeteria food at one Mississippi private school is nothing to turn your nose up at with the recent hire of a professional chef.

Adams County Christian School’s new chef Jonathan Borum trained at the Louisiana Culinary Institute in Baton Rouge. He graduated from the two-year culinary program in 2018 and has since worked as a professional chef at Pig Out Inn and the Vue Hotel’s restaurant with Kate Brasher. Brasher is now a chef at The Castle at Dunleith and Borum has a newfound love cooking for 450 or so young people five days a week at ACCS.

“It is very different than working in a restaurant,” Borum said. “There, you get an order and you cook it but with this, you know somewhat ahead of time what you’re making and I’ve got to make enough for 400 people.”

Borum said his reason for moving from the restaurant to the cafeteria is family. His daughter is a student at ACCS. While working in a restaurant, Borum said his hours were long and he spent a lot of time away from family.

Borum’s wife, Jennifer, suggested he ask about working at the school. After sitting down with headmaster David King, Borum learned the cafeteria was short-handed and was quickly offered the job. He started in November.

Borum said he has charge over the menu, which he has spiced up a bit with new, healthy choices for students.

“I don’t want to shock them out of what they’re used to, but every week I’ll have something new for them that most of them have never tried. They’ll always ask, ‘what is this,’ and I’ll sneak in a vegetable for them,” he said.

Students at ACCS look forward to breakfast and lunch each day. For breakfast on Thursday, students had a choice of breakfast pizza, sausage and cheese biscuit or a sweet and flaky breakfast scone.

For Wednesday’s lunch, they had Borum’s version of fresh spaghetti and meat sauce, which had some students coming back for seconds or thirds, said Della Floyd.

“We had a lot of students ask for ‘double-doubles,’” she said. “That is when we give them two scoops of spaghetti and two pieces of garlic bread.”

The teachers have enjoyed having Borum around, too. He takes the requests from the students and the staff into account and will sometimes have something a little different prepared for the staff’s lunch, such as baked chicken on a salad as opposed to pizza and tater tots.

Borum said he is planning to mix it up with Asian-style dishes in the coming weeks, including tangy orange chicken and Mu Shu Pork.

Floyd said she helps with the cleaning and serving. Borum also has two other sets of hands helping out with food preparation, with serving and at the register, Tamara Fakes and Jennifer Watson. Fakes said she has been the overseer of the cafeteria food for four years.

“It’s different having a man around here,” she said. “We’ve learned a lot from each other. He will do things one way and I’ll do things another.”

While he has only been cooking professionally for the past year and a half, Borum said his passion has always been in the kitchen since he was very young and still learning how to cook from his mom and uncle, who is also a chef, Alan Borum.

“I remember as a kid being left alone while my parents went away to do something and when they got home, I had four cakes made for them,” he said. “I just like to cook.”