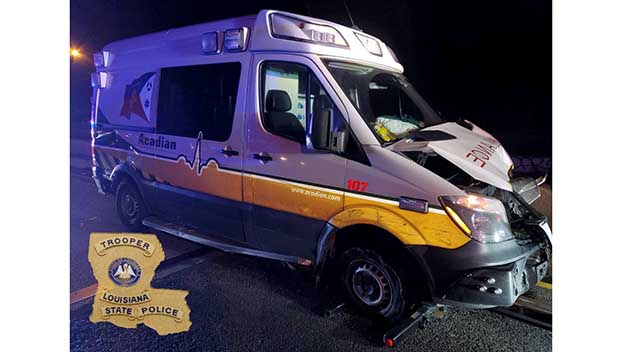 A Louisiana man stole an ambulance and led police on a chase before eventually ramming a police car and leaping from an interstate overpass, state police reported.

The incident started at approximately 3 a.m. Friday when the man allegedly stole an Acadian Ambulance on Interstate 10 in St. Charles Parish.

The parish sheriff’s office initially pursued the ambulance, but stopped the pursuit over concerns the driver would injure someone else.

The man at the wheel of the stolen ambulance was later identified as Jeremy McCurley, 38, of Baton Rouge. He refused to stop and eventually state troopers deployed a tire deflation device, but McCurley continued driving, state police said, eventually ramming the back of a Louisiana State Police car.

Another trooper then rammed the ambulance with his own patrol vehicle to disable the ambulance. But McCurley then fled the scene on foot and jumped off the Perkins Road overpass off the interstate. He sustained what troopers described as moderate injuries from the fall.

McCurley was taken to Our Lady of the Lake Regional Medical Center for treatment.

Once he is medically cleared, McCurley will be booked for several criminal charges, including theft and possession of a stolen motor vehicle, aggravated flight from officers and numerous traffic violations, troopers reported.