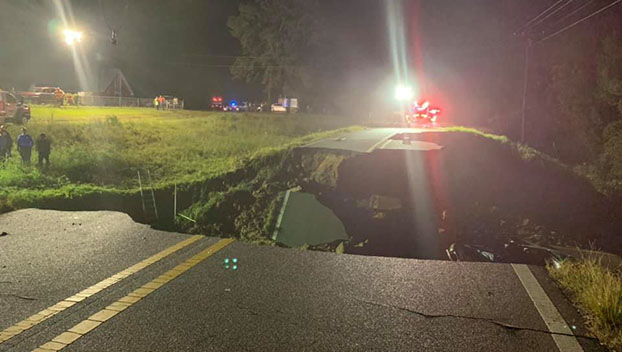 A Mississippi teenager who survived a deadly collapse of a highway after Hurricane Ida is back home after spending nearly five months in Georgia recovering from her injuries.

Hundreds gathered Thursday at Lucedale City Hall to welcome home Layla Jamison, 18, of Lucedale after a long journey of rehabilitation and recovery at the Shepherd Center in Atlanta, WLOX-TV reported. Jamison suffered many broken bones including her legs, arms and back and internal injuries after the Aug. 30, washout of Highway 26 following Ida. Three people died after the road gave way amid a torrential downpour and 10 were injured, including Jamison.

Jamison was in a car that landed on a pickup truck where two people were trapped after the truck plunged into a dark, muddy pit when the highway collapsed. The highway reopened in November.

“She’s already been through over 21 surgeries, and we just want to show her our love and support and just put our arms around her and welcome her home,” said Kelly Wilkerson who organized the celebratory event for Jamison along with Pam Henderson and Marsha Peters.

Several presentations were made for Jamison during the event, including giving her a key to the city.

“I’m thankful for all of the prayers you guys have said for me, they mean the world, I can’t express my thankfulness enough,” she said, adding that the support was overwhelming.

“I’m beyond grateful for everyone here, and for the fact that I am here. I’m so happy,” she said.
Jamison told news outlets her recovery has been a struggle.

She said she knows she still has a long road to recovery. But she’s looking ahead, not backward.