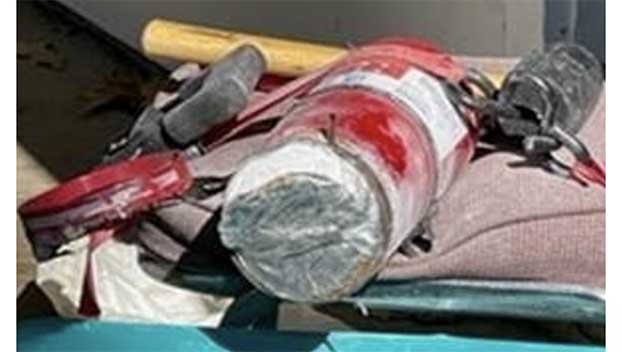 An Arizona woman who was stopped on I-40 on a traffic violation earlier this week is facing drug-trafficking charges after officers found 20 pounds of fentanyl hidden in two fire extinguishers inside her vehicle, said Shelby County Dist. Atty. Gen. Amy Weirich.

The driver was identified as Adalinda Saucedo, 37, whose 2021 Toyota Corolla was stopped just before midnight Monday on I-40 at the Fayette County-Shelby County line.

Johnie Carter, director of the West Tennessee Drug Task Force (WTDTF), estimated that the wholesale street value of the deadly fentanyl shipment was close to $1 million.

“The task force agents are always on alert,” Carter said. “They are trained to expect the unexpected in every stop. It’s a constant battle because drug traffickers will use any method you can imagine to move their illegal drugs through West Tennessee. This seizure is another example of the ongoing battle we face.”

He said just two milligrams of fentanyl can cause a fatal overdose, meaning that the seized shipment was enough to kill more than 4.5 million people.

Carter said that when Task Force officers developed reasonable suspicion that Saucedo was likely involved in criminal activity, they began a consent search of the vehicle.

Carter said the contraband likely was being taken to Monroe, N.C., from Dallas, Texas. Saucedo was taken to the Fayette County Jail.

The WTDTF operates by joint agreement in the 28th, 29th and 30th Judicial Districts, and also includes members from the Fayette, Haywood and Tipton County Sheriff’s Departments and the Memphis and Germantown Police Departments.

Fayette County, which is in the 25th Judicial District, includes about 15 miles of I-40.