‘It’s like, wow.’ Mississippi students travel to Washington D.C. to participate in March for Life 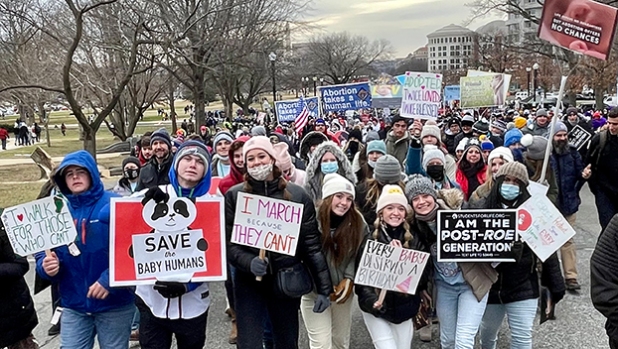 Twenty-five Mississippi students traveled to Washington, D.C. last week to participate in the March for Life annual rally at the capitol and the National Pro-Life Summit.

The rally takes place on or around the anniversary of Roe v. Wade, a decision issued in 1973 by the United States Supreme Court legalizing abortion nationwide.

JoAnn Waycaster, a religion teacher at Cathedral High School, said this was the fourth year that Cathedral Students participated in the march and rally.

“This is the largest group that we’ve had go,” Waycaster said.

The cause is one of particular importance to Waycaster, who was not only adopted as a child but also was told by her doctor that she should terminate her pregnancy with her third child, John Connor Waycaster, who had a chromosome disorder. Waycaster chose not to listen and her son lived six weeks and a day after his birth on May 3, 2004.

“Most of us have had Mrs. JoAnn as a teacher. The juniors have had her for a year and we (seniors) have had her for two years,” Loomis said. “Throughout that whole time, something she is very passionate about is making sure that we’re not just caught up in what we see on the news or on social media—that we know the real things that are going on. We know her story and other stories and actually understand. It was cool to go and see all of these people fighting for the same thing and be a part of it knowing that you made your own stand.”

Joseph Garity, who went to March for Life twice beginning his freshman year and again this year, said he was amazed at the sight of approximately 150,000 people coming together for a common cause.

“When you get on top of that hill by the Supreme Court, you think you’re at the front but you’re not even close,” he said. “You’re probably closer to the back and you turn around and see thousands and thousands of people behind you, much less the people that you can’t see in front of you in less than 10-degrees weather. It’s like, wow.”

Hannah Murray said she was surprised by how many people she saw close to her own age.

“The purpose of the summit is to give you the tools to come back to your schools and communities and really bring that message back,” Waycaster said.

One of the students, Sa’Maria Gibson, said one of the seminars she attended at the summit resonated with her as a young Black woman.

“One of the seminars I went to was a Black Lives Matter seminar and they showed us how a lot of the abortion clinics and advertisements are targeting Black women and also Hispanic and other minority groups,” she said. “It makes me feel sad.”

Sarah Saxon Falkenheiner said the summit for her was one of her favorite parts of the trip.

“Going to this conference … I learned and how to talk to people and not necessarily convince them but prove why you believe what you believe and heard all of these stories from people who’ve had all of these different experiences. It was really amazing.”

At least one student left the Pro-Life Summit with a different perspective than when he got there.

“The reason I decided to go was because I was on the fence about whether I was Pro-Choice or Pro-Life,” Dean Huntstock said. “After hearing everyone’s stories, I think I’m now fully Pro-Life. I went to two or three speakers and heard about all of the different kinds of support women have if they do get pregnant. The chemical abortion is what really changed my mind. You can order it in the mail or on Amazon. The first pill kills the baby and the second causes contractions. Mind you, these women are at home without medical care and all Planned Parenthood gives you is a phone number to call. It’s inhumane.”

High-speed chase ends with exchange of gunfire with Mississippi…