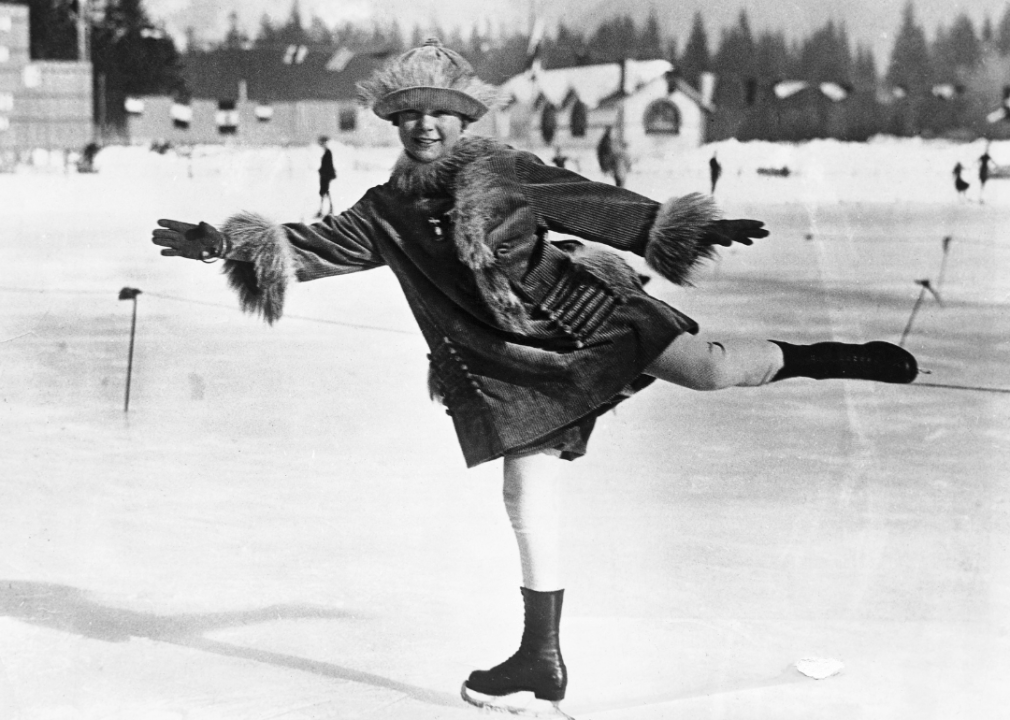 The first Winter Olympics—then called International Winter Sports Week—were held from Jan. 25 through Feb. 5, 1924, in the small French town of Chamonix, France. The multi-sport event featured 260 athletes representing 16 countries in five sports: bobsleigh, curling, ice hockey, Nordic skiing, and skating. Chamonix emerged from obscurity and into the spotlight as athletes publicly displayed their talents in various competitions from figure skating to cross-country skiing in front of more than 10,000 spectators. In 1926, the event was retroactively reclassified as the first-ever Olympic Winter Games.

Stacker curated a collection of 25 vintage photos from the competition, drawing from various sources to showcase groundbreaking sports milestones and athletic visionaries.

Among the nations participating in the first Winter Olympics were France, the United States, Canada, Norway, Italy, Great Britain, Poland, and Yugoslavia. The U.S. dominated the 500-meter speed skating event, while Canada secured several wins in ice hockey. The 1920s were also a time when women and young girls were allowed more freedom to partake in sports, even if it was a predictable winter sport such as figure skating. The photos in this collection showcase the excitement of the Games, stunning landscapes, and strikingly sparse gear of the athletes—including ice hockey players and bobsleigh teams competing without helmets.

The Winter Games were held every four years thereafter, pausing in 1940 and 1944 because of World War II. Olympic schedules were altered in the ’90s, and over the years more sports and competitions have been added including luge, freestyle skiing, and snowboarding. Keep reading to learn more about the first Winter Olympics and to see stunning photos from the various events.

You may also like: Best-selling fiction books from the year you were born Delegates gather for the opening ceremony

In this photo, delegates from competing nations gather on Jan. 25, 1924, in front of the Saint-Michel Church and Hotel de Ville for the opening ceremony of the 1924 Winter Olympics in Chamonix, France. The first-ever games, aptly held in the French Alps, were originally pegged as “International Winter Sports Week.” 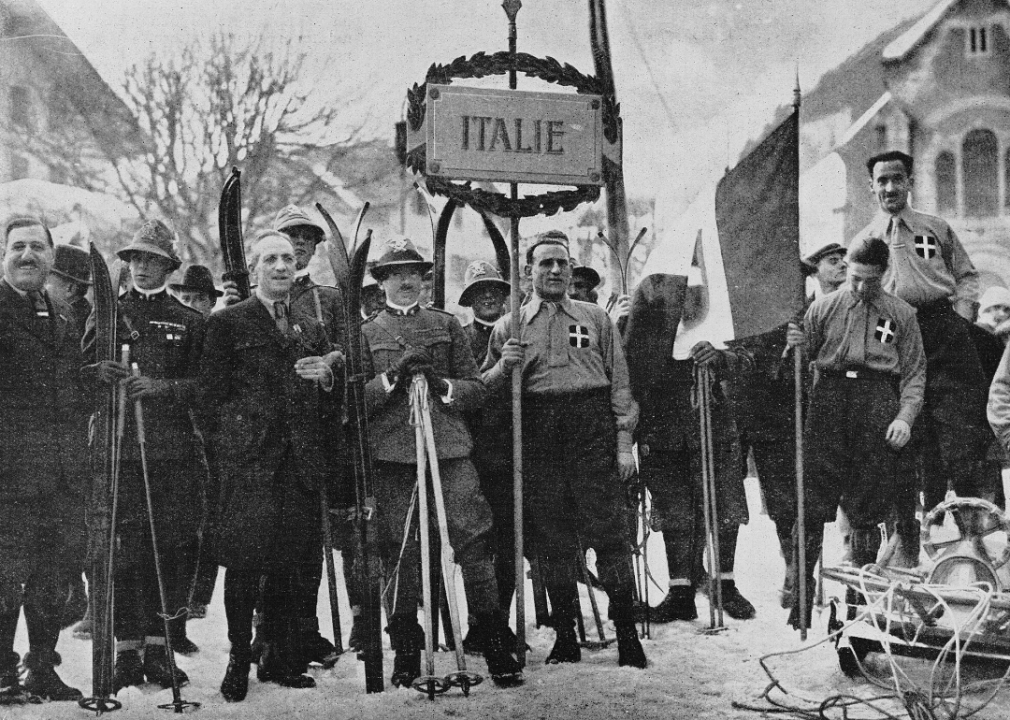 Italian athletes at the inaugural parade

Italian athletes stand proudly while attending the inaugural parade on Feb. 10, 1924. Italy sent 23 men to compete in four sports; the athletes didn’t win any medals. Italy has hosted two Winter Olympics: the 1956 Winter Games in Cortina d’Ampezzo and the 2006 Winter Games in Turin. The country is slated to host again for the 2026 Winter Olympics. A pledge to sportsmanship

French athletes are seen taking the pledge to participate in the games with integrity during the 1924 Winter Olympics opening. 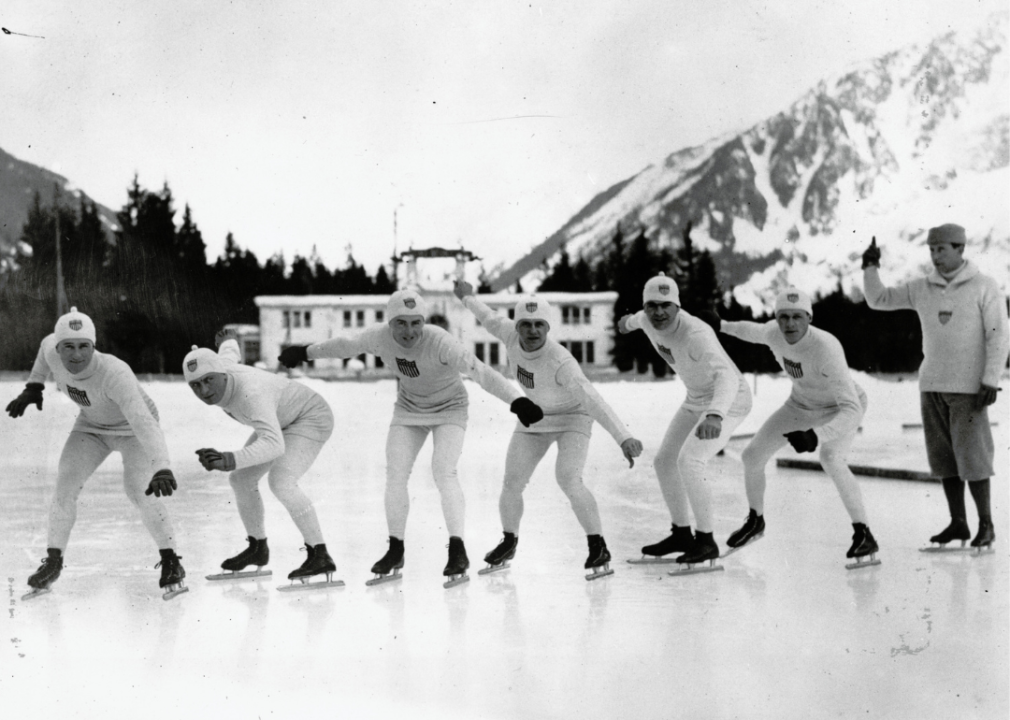 A group of American speed skaters preparing for competition at the 1924 Winter Games.  Five all-male speed skating events were held. 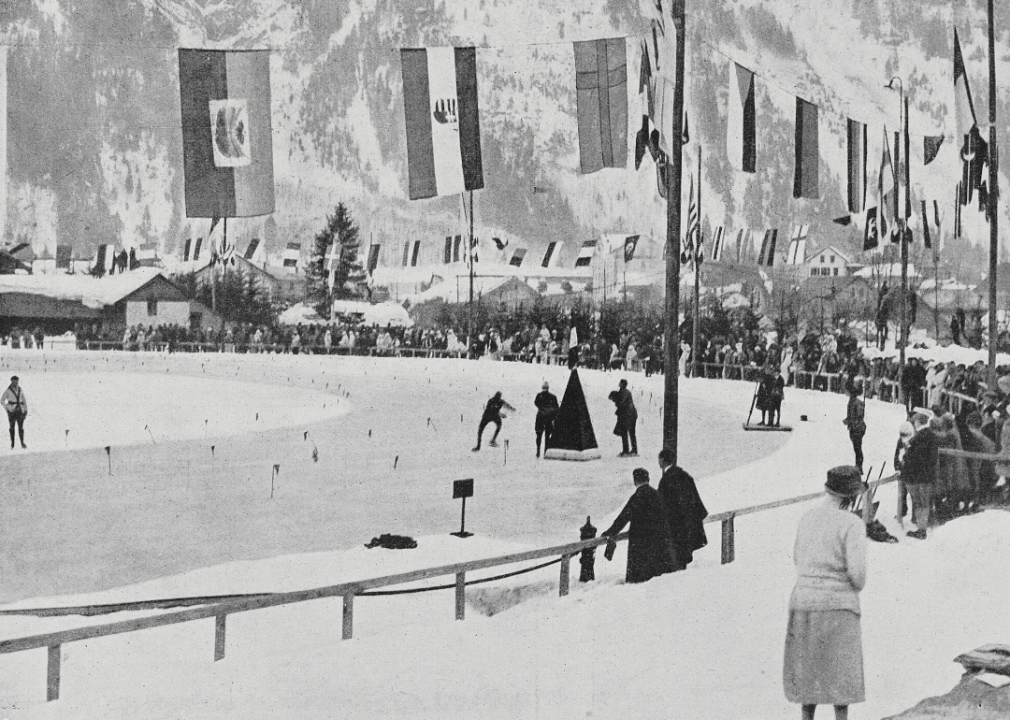 Spectators gather in anticipation at the beginning of the 10,000-meter speed skating competition at the Winter Games.

You may also like: 100 monumental novels from literary history 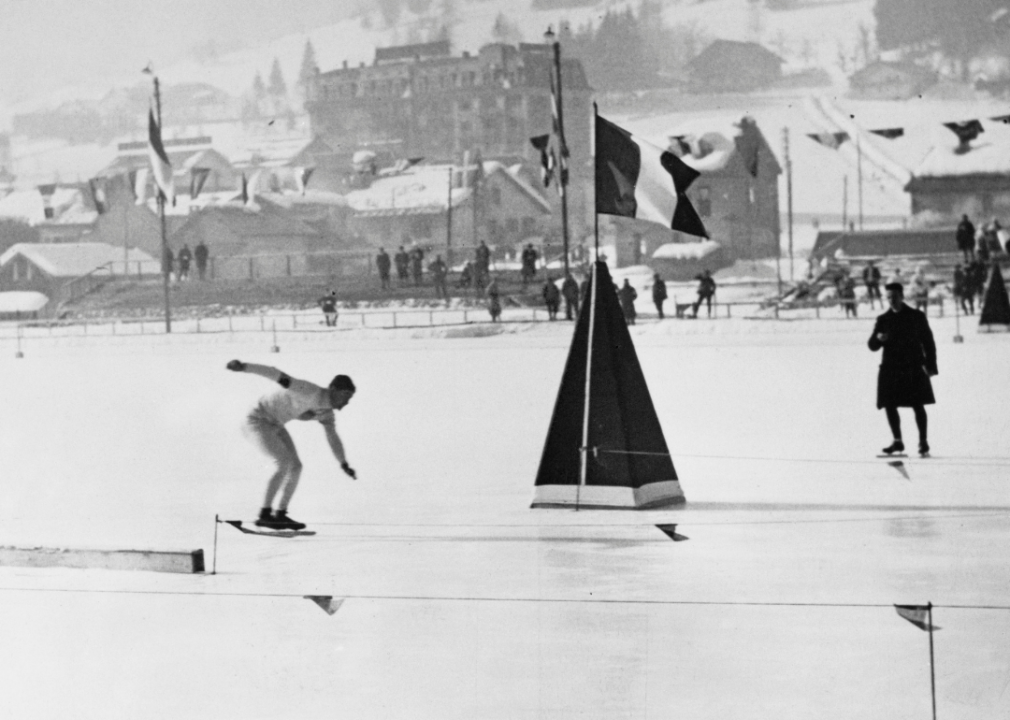 Charles Jewtraw became the first American speed skater to score a gold medal, winning the 500-meter speed skating competition at the Winter Olympics in Chamonix, France, in 1924. Jewtraw’s historic win set the American record and in 1963 the Olympian was inducted into the National Speedskating Hall of Fame in Chicago. 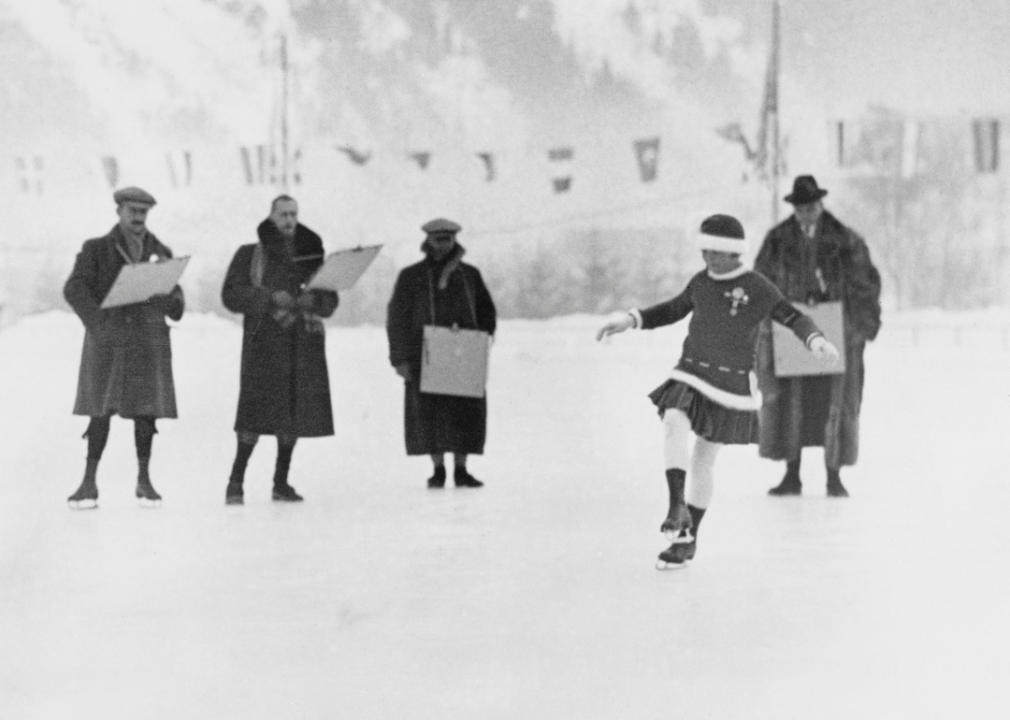 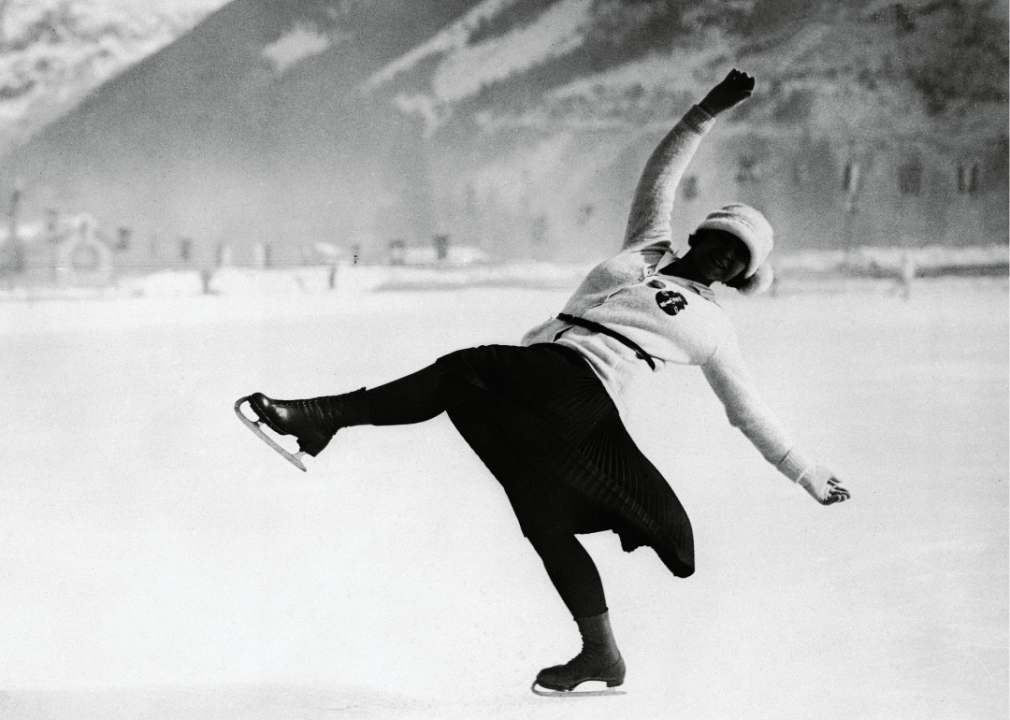 Austrian figure skater Herma Planck-Szabo glides to victory, winning the gold medal in ladies’ singles. Planck-Szabo was a powerhouse in the figure skating scene during the 1920s, having won five world titles. 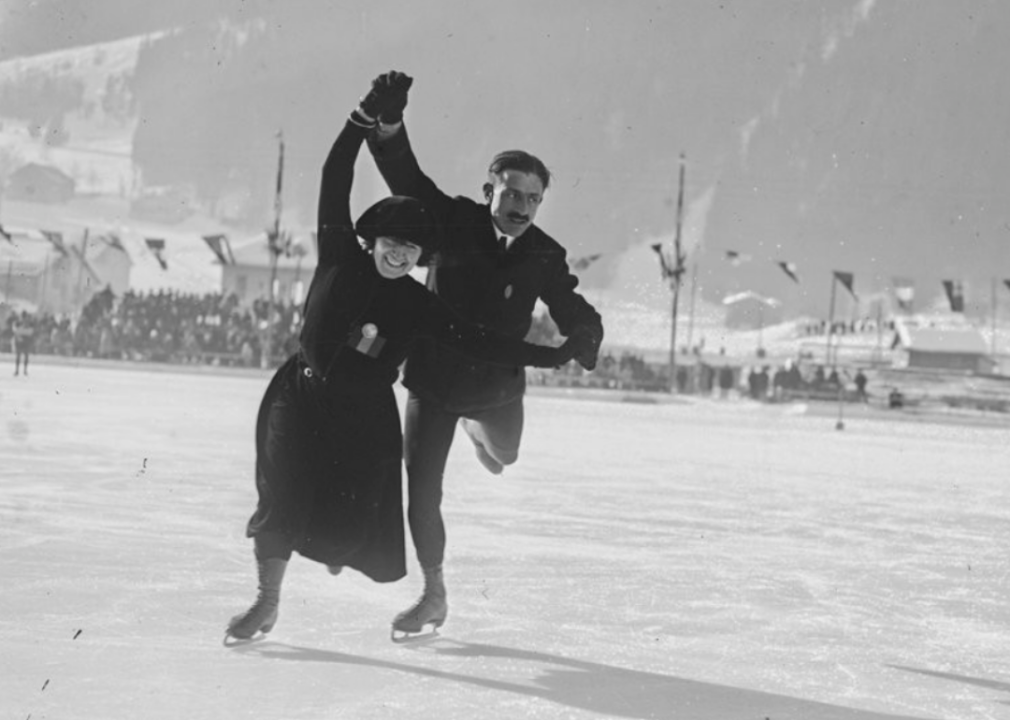 Belgian figure skaters Georgette Herbos and Georges Wagemans glide in the rink together.

You may also like: The most popular book the year you were born 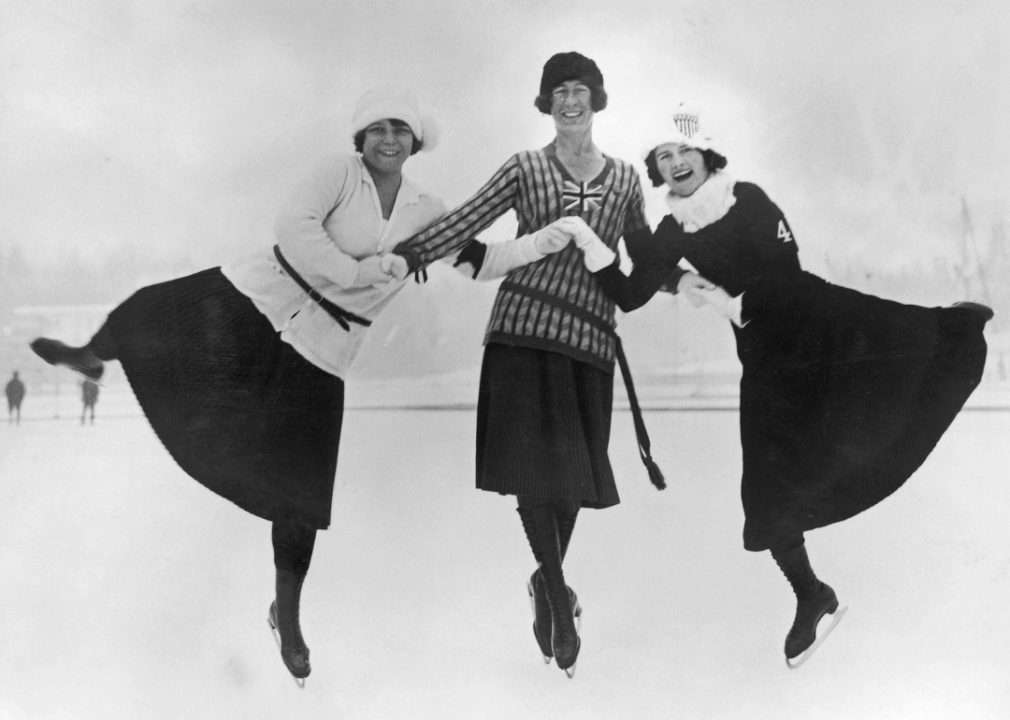 Skaters pose for a group photo

Figure skaters Herma Planck-Szabo of Austria (winning gold), Beatrix Loughran of the United States (winning silver), and Ethel Muckelt of Britain (winning bronze) pose for a photo together on Jan. 30, 1924. 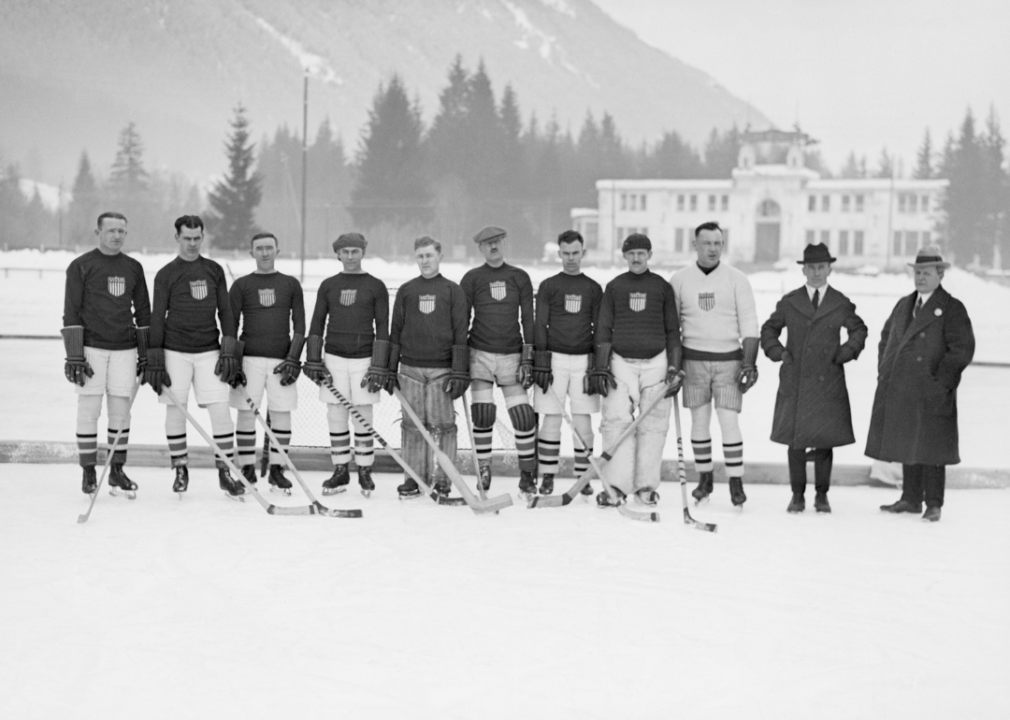 Members of the U.S. Olympic hockey team take a moment to take photos before training. The American team was triumphant in their first match against France. 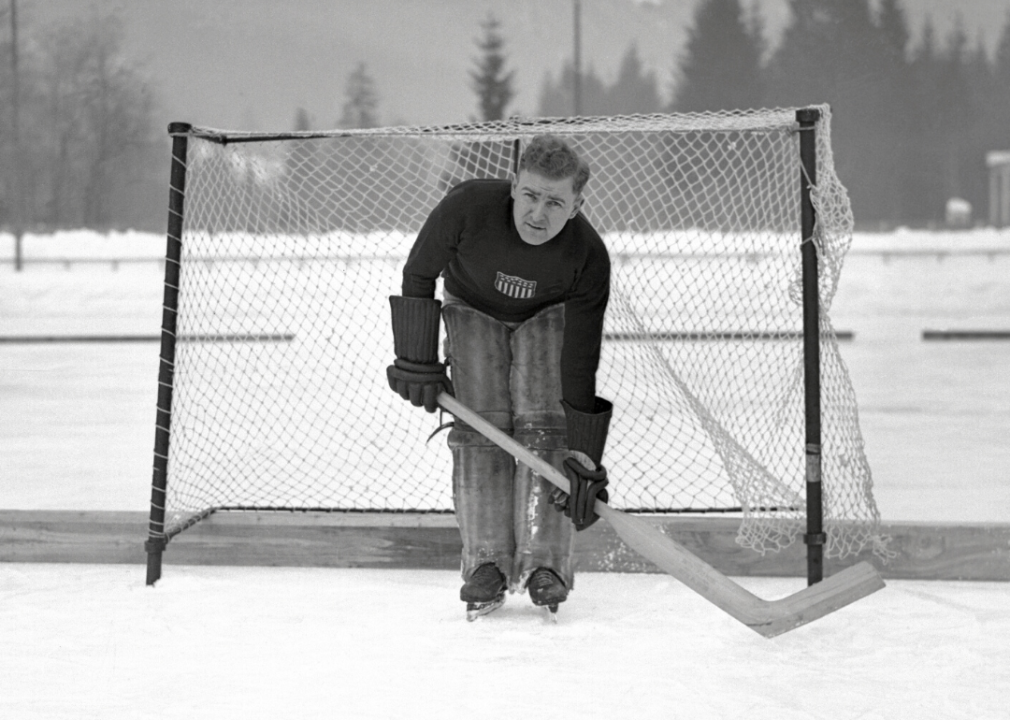 In this photo, Alphonse Albert Lacroix, the goalkeeper for the American hockey team, is seen training for the 1924 Winter Games. 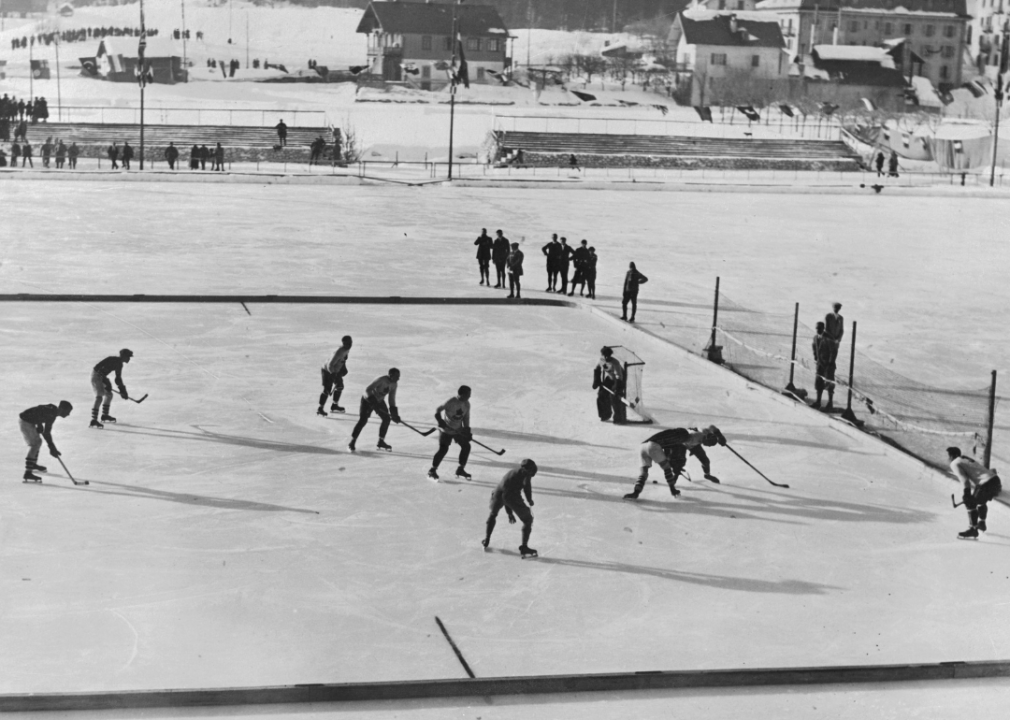 In this photo, the Canadian team lands a victorious win over the American team in the final Olympic hockey match. 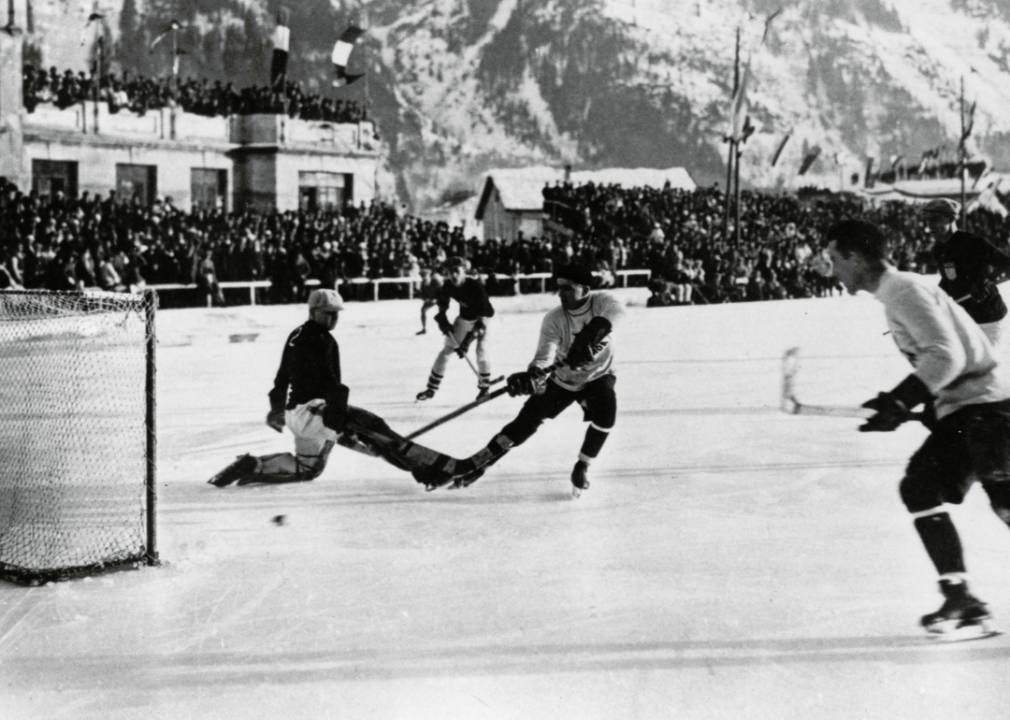 Canada’s Toronto Granites ice hockey team makes their final score, securing a victory over the United States in the final 6-1 to take home the gold medal.

You may also like: 50 famous paintings and the stories behind them 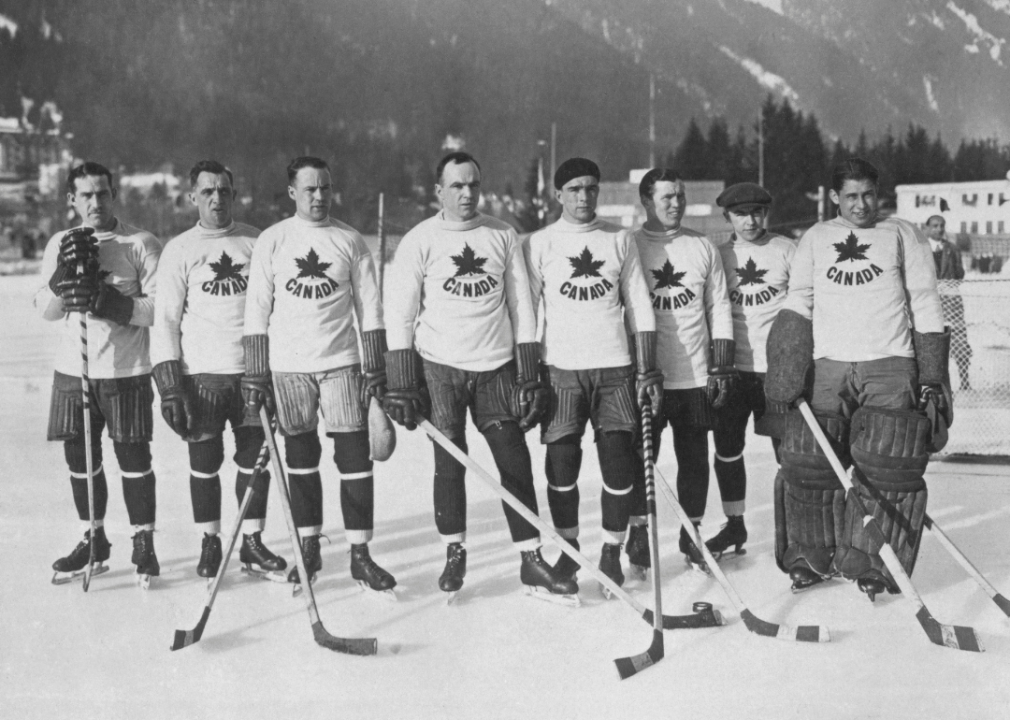 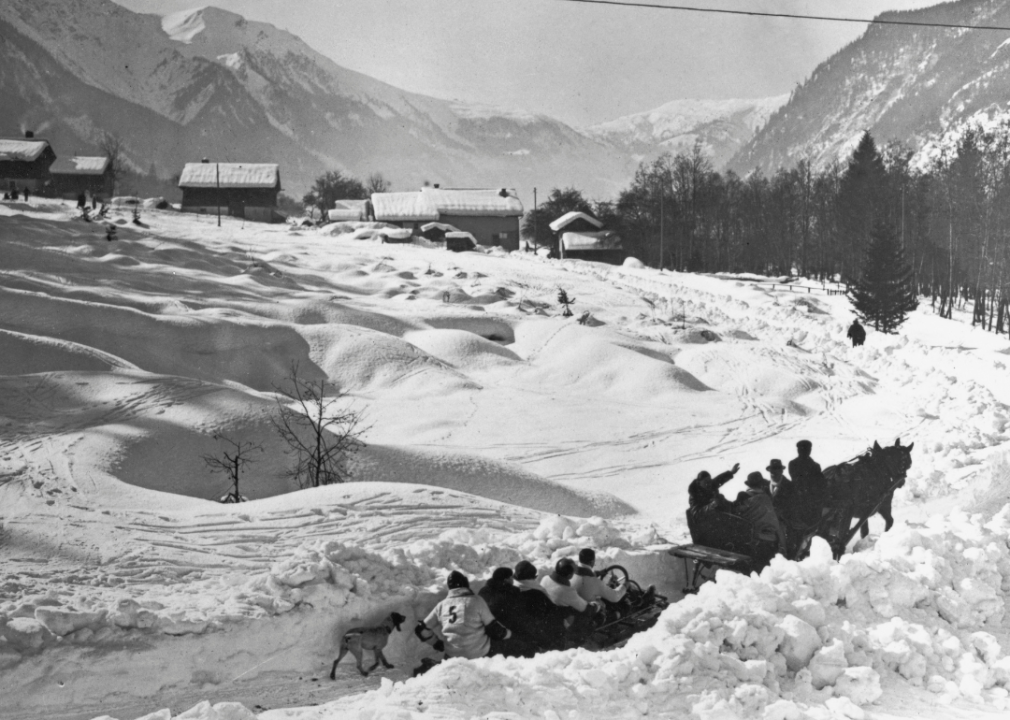 In this shot, the Olympians take to the bobsled track, Piste de Bobsleigh des Pellerins, the starting post specifically constructed for the 1924 Winter Games. 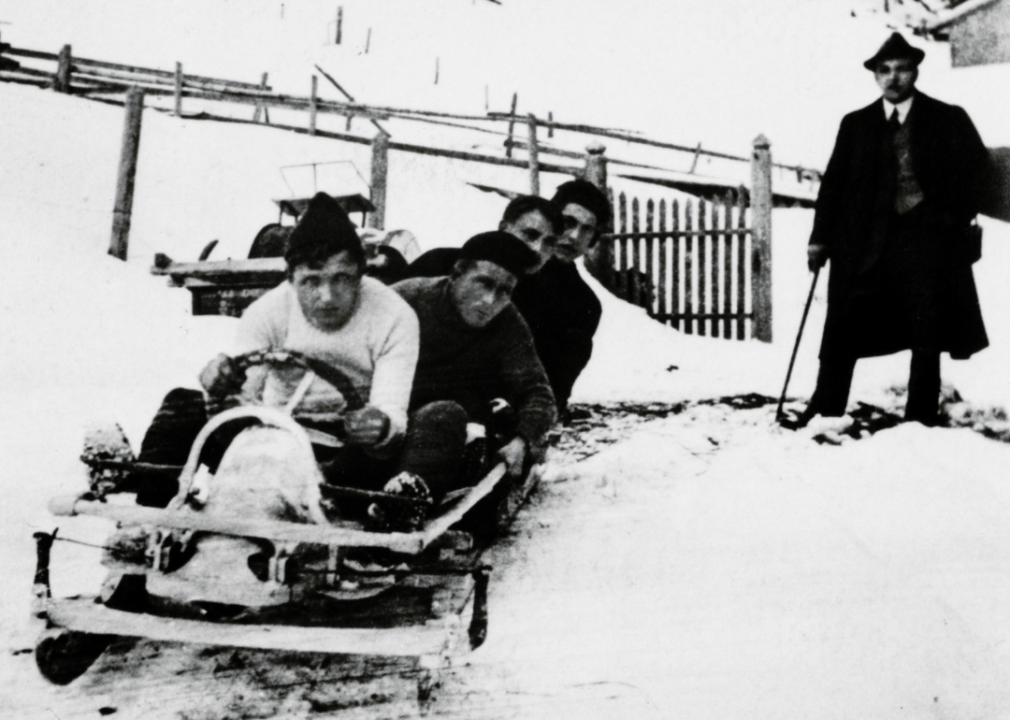 The Swiss bobsled team makes their way to winning the first-ever gold medal for the four-man event. 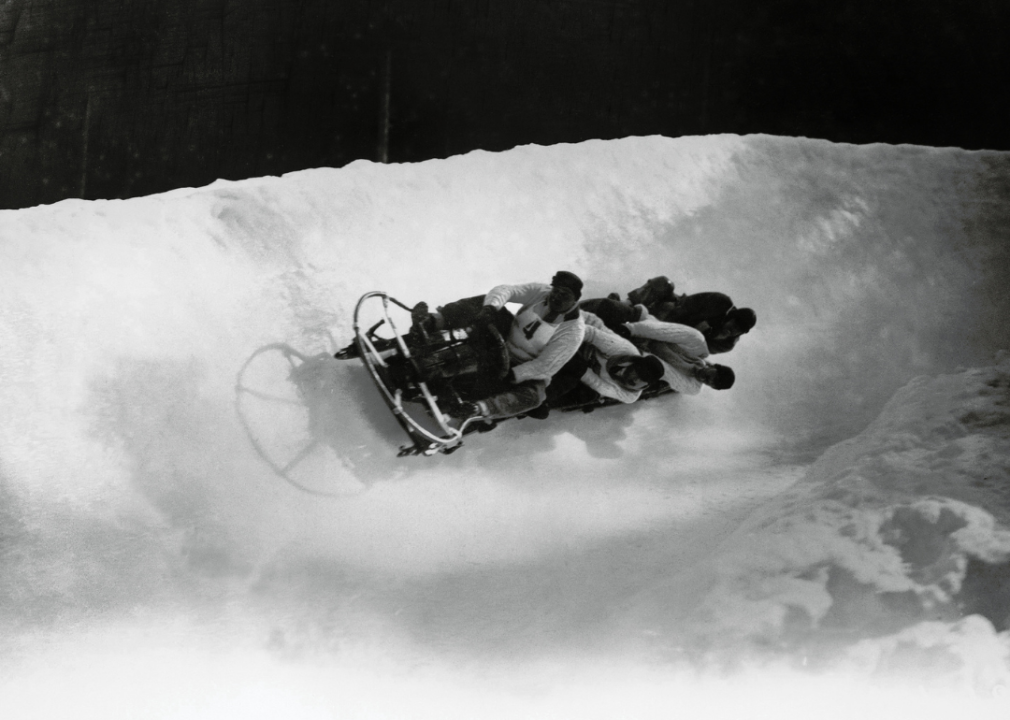 The four-man British bobsled team—comprised of Alexander Richardson, Ralph Broome, Thomas Arnold, and Rodney Soher—sleigh on to winning the silver medal at the Olympic Games. 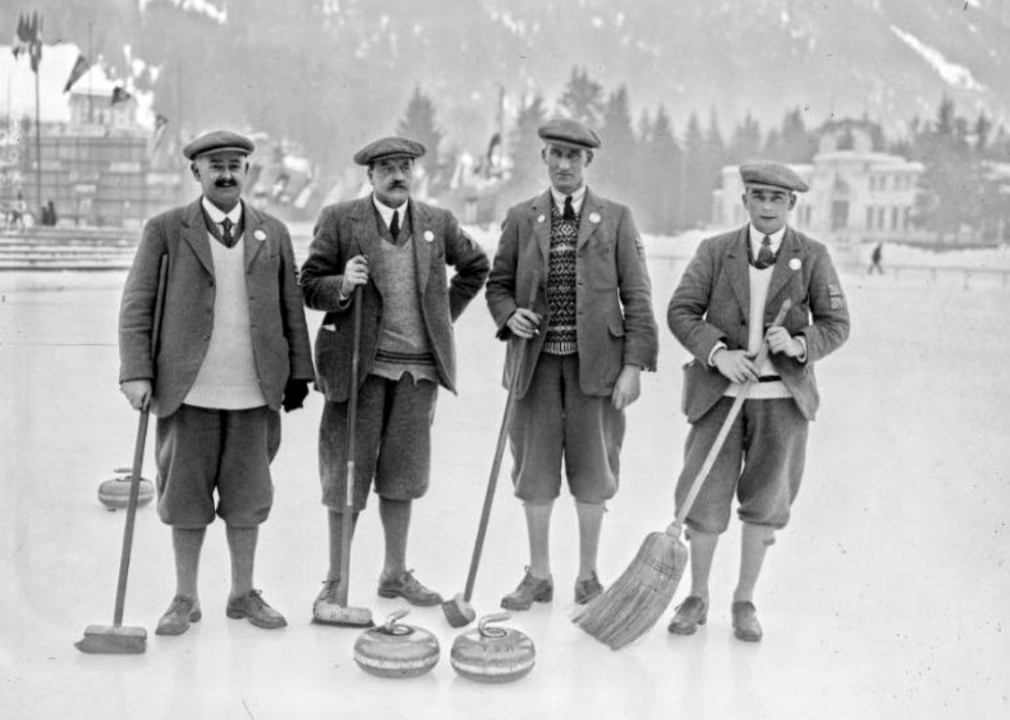 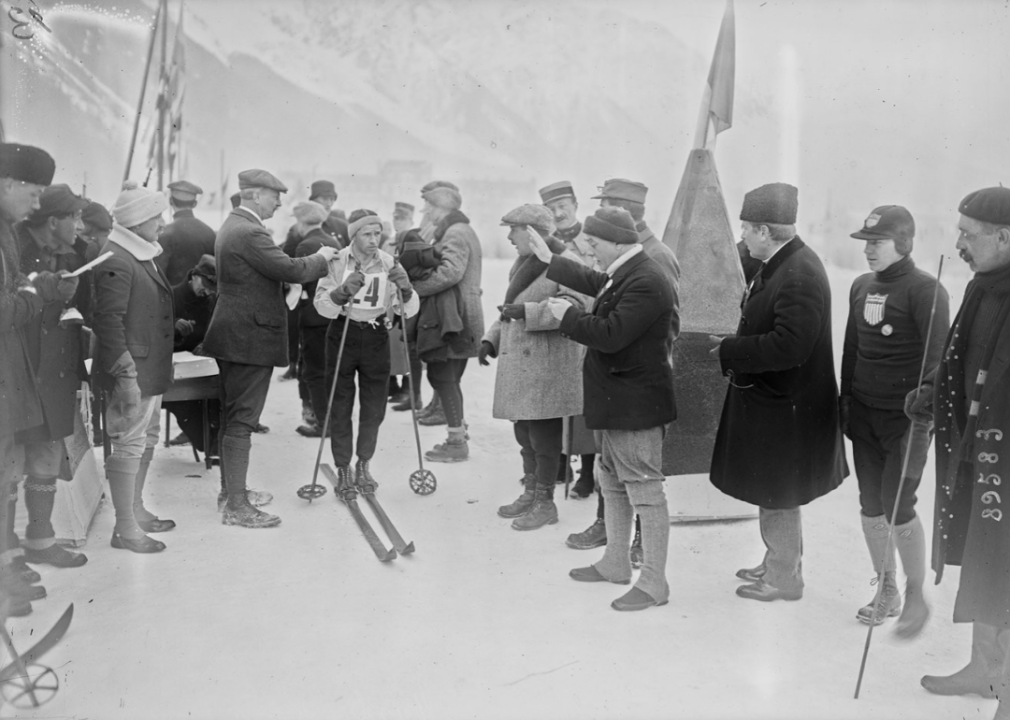 Readying for the 18-kilometer cross-country 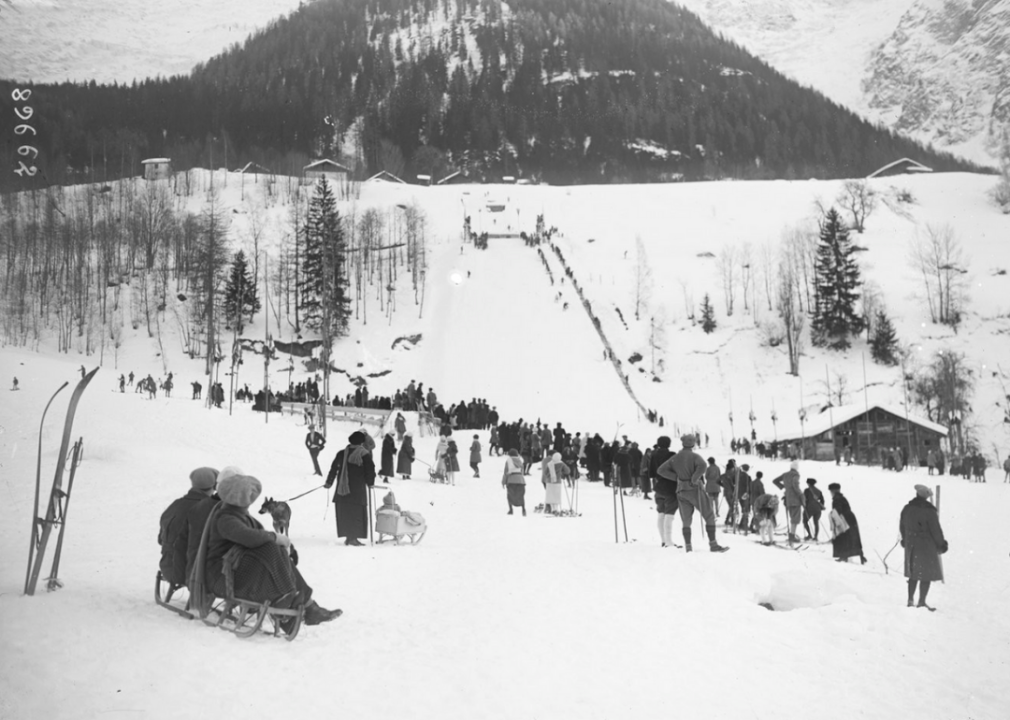 Attendees take in the mountain view during the 1924 Winter Olympics. 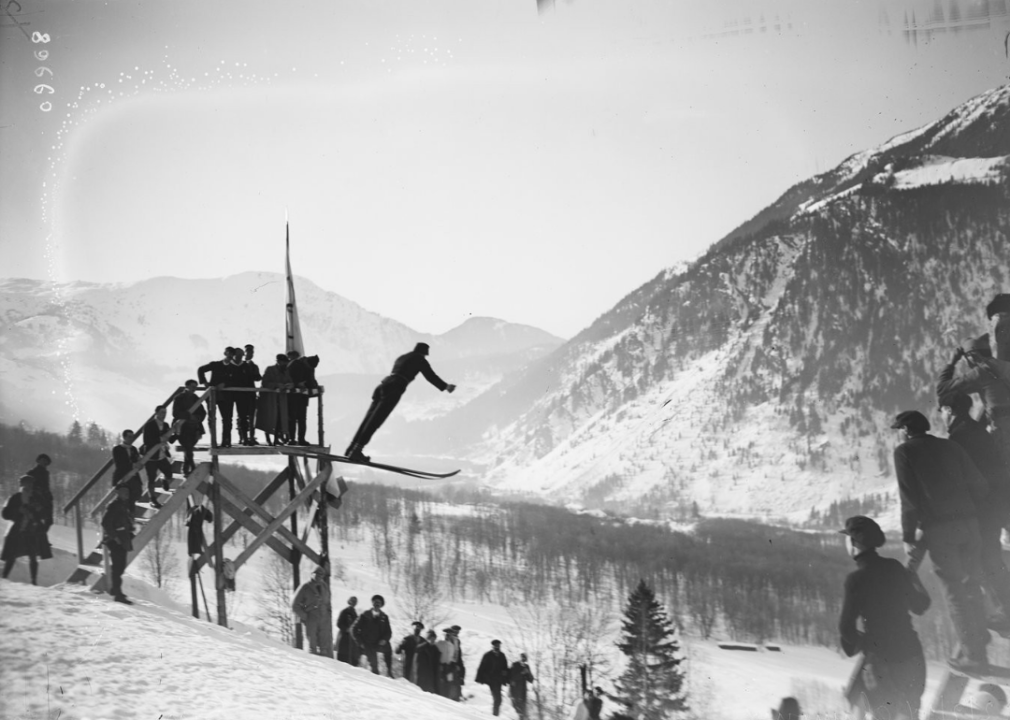 Czechoslovak skier Josef Bím came in 13th place in the Nordic combined event and 26th in the ski jumping competition. 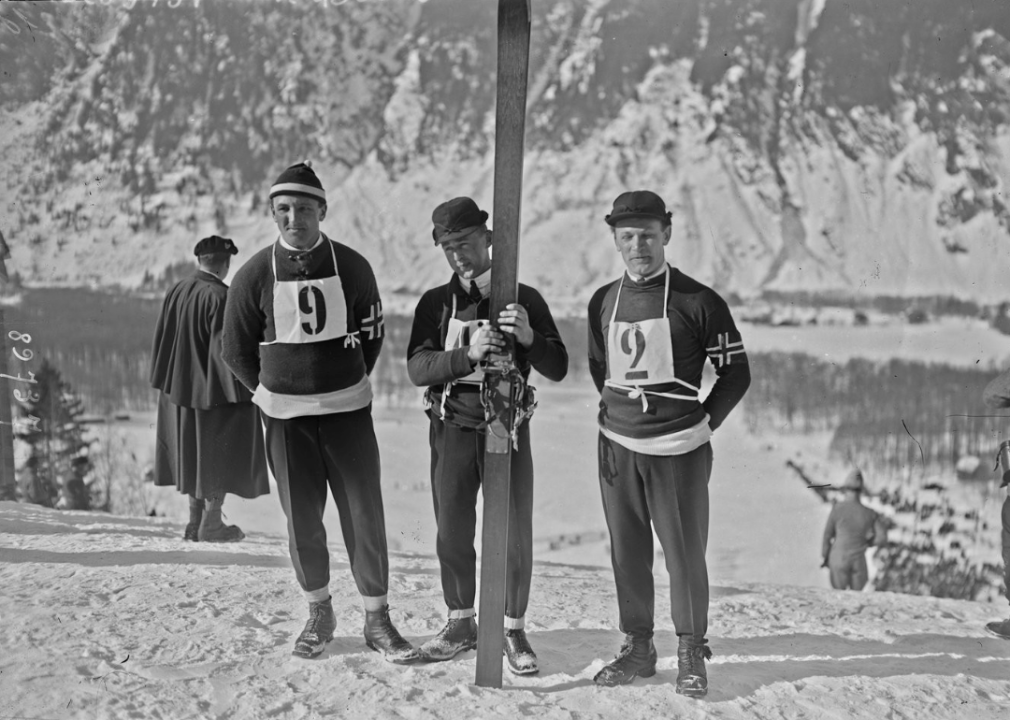 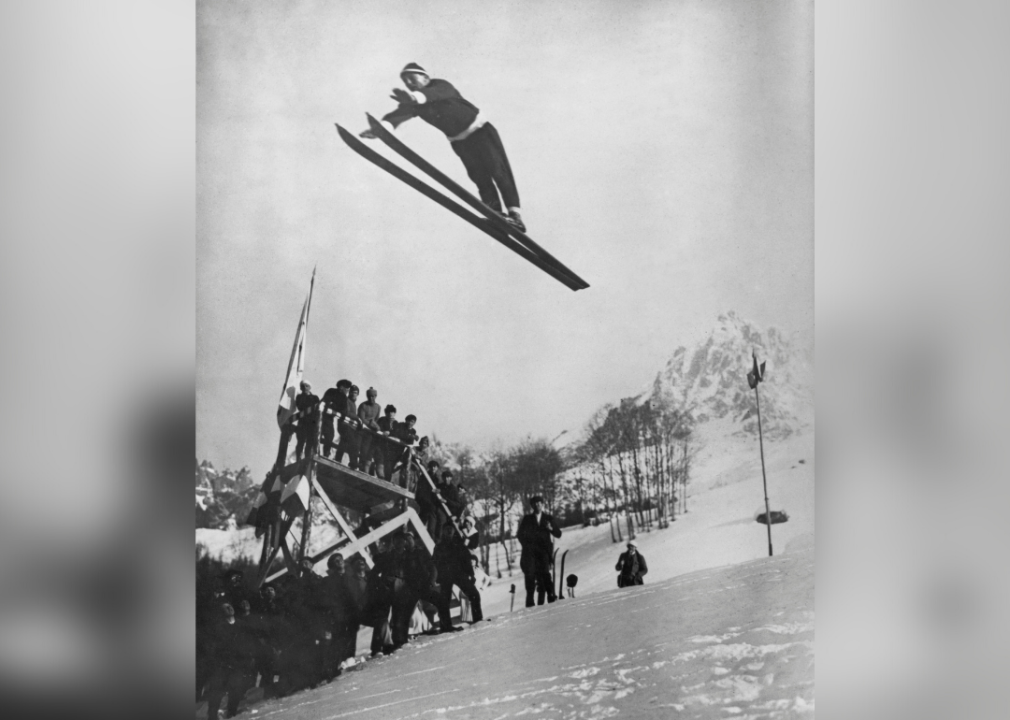 Jacob Tullin Thams soars through the air, attracting dozens of onlookers as he competes on Feb. 4, 1924. The Norwegian athlete, who won the first Olympic gold medal in ski jumping, is captured here using a technique he created called the Kongsberger, which is still widely used in the sport today.

You may also like: Photos of the year from the International Photography Awards