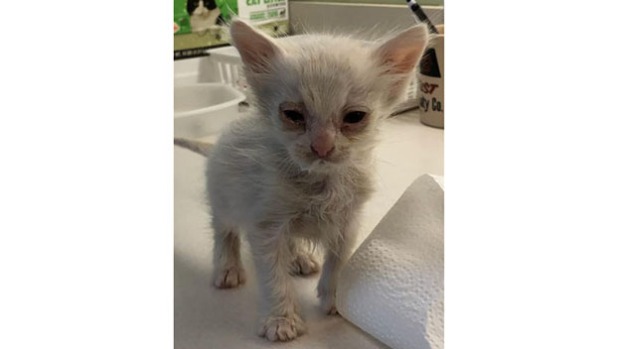 Esther Jeffus adopted a white kitten that she named Frazier after a child allegedly tried to drown him and two of his littermates outside of a Natchez apartment complex. Frazier’s littermates did not survive. (Submitted photo)

Animal rescue services in southwest Mississippi are advocating a new law that could require children who abuse a dog or cat to undergo mental evaluation.

According to those closest to the issue who work with animals every day, situations of children abusing animals not uncommon to Adams County.

Approximately three weeks ago, JP Smith said he looked out of his window and saw two children shooting at what looked like at least 10 cats with a BB gun near Jack Waite Park on St. Catherine Street.

“I would have talked to the children’s parents if I knew who they were but I didn’t know them,” he said.

Feeling that he should do something, Smith said he called volunteers with local animal rescue services and was referred animal control. By the time he reached out to animal control, there little that could be done about it.

The children were never caught, he said.

“The cats were jumping and running. As far as I know they were OK,” he said. “I was told if I see it happen again to call 911.”

Shooting cats or dogs, even with BB or pellet guns, is a crime that can be fatal to the animal in some cases.

In 2020, Mississippi Legislature was successful in passing laws that make each act of aggravated cruelty to animals a felony punishable with a $5,000 fine, prison time of no more than three years or both.

However, when a child does the same thing, there have been no penalties.

Senator Angela Burks Hill from Picayune, who represents Marion and Pearl River Counties in District 40, introduced a revision to Senate Bill 2658 last month to change that.

The revision requires children adjudicated delinquent who have abused a domesticated cat or dog to receive a psychiatric or psychological evaluation and counseling or treatment for a length of time prescribed by the youth court.

The revision is called “Buddy’s Law” in response to a particular incident which occurred in the Spring of 2021 in Tate County. A Labrador retriever mix named Buddy was found with extensive burns on his face and an extension cord wrapped around his neck.

Authorities believe a 12-year-old child to be responsible. However, because of the child’s age, they could not prosecute.

Buddy’s injuries required two skin grafts in April and he will always require artificial tears to be put in his eyes because his eyelids and tear ducts were so badly damaged by the fire.

Since the incident, Buddy has been nursed back to health by the Tunica Humane Society where he still waiting for a forever home, according to social media posts.

“Currently, children cannot be charged or evaluated in any way for crimes against these animals,” Marie Gasquet, a volunteer with Hoofbeats and Paw Prints Rescue in Natchez, posted on her social media page about the law. “Please let our congressmen/women know how we feel about this situation.”

On Aug. 16, two soaked kittens were brought in to the shelter in critical condition. An officer rescued the kittens from outside a Natchez apartment complex where children had allegedly tried to drown them, McMorris said. One of the kittens died within a couple of days and the other survived, she said.

“He had some touch and go times we’re we thought he wasn’t going to make it,” McMorris said of the kitten that survived. “Originally there were three kittens but one of them didn’t make it from the scene.”

Esther Jeffus said she heard about the kitten and went to the shelter to see him. She wound up adopting him and two other kittens.

“I named him Frazier because I wanted him to have a fighter’s name,” she said. “He fought for his life for six weeks. He’s a beautiful cat now. I fell in love with him and asked to be put on the list to adopt him. I was the only person on that list.”

Morris said she suspects maybe two of every five animal abuse cases may have involved children—such as starved animals either tied up or hidden in kids’ rooms that their parents were not aware of.

“In the case of a child, they don’t see the consequences of what they’re doing at the time,” she said.

Kathy Fitch, the director of Hoofbeats and Pawprints Rescue, said the rescue takes in more than 1,700 pets each year, a lot of which are victims of neglect and cruelty.

The most common form of abuse is starvation and “dumping” of unwanted pets, she said. However, there are occasionally cases of injuries raise suspicion of intentional harm done to animals, such as burns or their extremities or neck wrapped in wire.

“We had an especially terrible case of a puppy that had super glue applied to his body in places that could not possibly have happened accidentally,” Fitch said. “That puppy died in spite of receiving medical care, including surgeries. We do report cases of this nature to the appropriate legal authority.”

She added the law would be helpful to both pets and the children who commit crimes against animals.

“Buddy’s Law, if passed, would be one more tool that could be used by Mississippi courts and law enforcement agencies to offer help to both pets and young offenders—hopefully before it’s too late and a child offender advances to inflicting harm on people.”

The law is still waiting on a vote from both the Mississippi Senate and House.