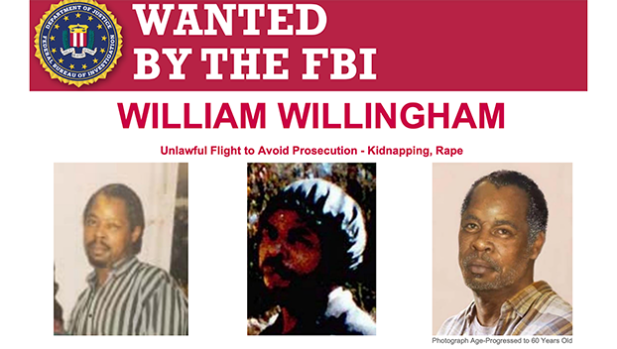 The Federal Bureau of Investigation (FBI) released an “age-progressed” picture of a man wanted for kidnapping and rape that happened more than 20 years ago.

The FBI updated the wanted poster for William Willingham, who is wanted for a 1998 kidnapping and rape in Tate County.

On Dec. 22, 1998, Willingham is alleged to have tied up his girlfriend in her bedroom at her home, and proceeded to the next room to rape her daughter.

Investigators said Willingham’s girlfriend managed to free herself and went to the aid of her daughter. However, Willingham allegedly brandished a knife and forced his girlfriend back into her room.

Authorities said he then returned to the room of his girlfriend’s daughter and allegedly continued to rape her. Willingham soon fled the home.

On March 4, 1999, Willingham was indicted by a Tate County Grand Jury for statutory rape and kidnapping. A federal arrest warrant was subsequently issued after Willingham was charged with unlawful flight to avoid prosecution.

The FBI is offering a reward of up to $10,000 for information leading to his arrest.