‘They swam with the dinosaurs.’ This corner of Mississippi may not be Jurassic Park, but prehistoric fish make it unique. 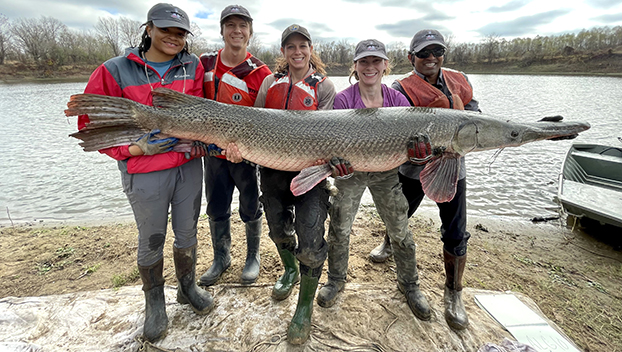 St. Catherine Creek Wildlife Refuge may be nothing like Jurassic Park but swimming amongst the cypress swamps, lakes and waterfowl at the national wildlife refuge are prehistoric fish whose ancestors swam when dinosaurs roamed the earth.

These fish are on average 100 to 150 pounds and four feet to six feet long. With a broad snout and two rows of sharp teeth, the Alligator Gar can grow as big as 300 pounds.

“We don’t see the amount or size of fish like it in many other places,” Kimmel said. “They are consistently found there. They like it a lot of the time and will come back. We found the Mississippi River has a natural connection to the floodplain.”

The Mississippi River plays a role in St. Catherine Creek’s Alligator Gar spawn. When the river floods, the Alligator Gar swim into backwater covering the floodplains beneath the loess bluffs. These shallow waters serve as a place to lay eggs and are a nursery for the fry.

Alligator Gar do not spawn until they reach the age of 10. Spawn begins in the late spring and early summer as water temperatures reach 70 degrees. Sometimes, the river level does not flood high enough for alligator gar to spawn. They regularly return to the refuge if the Mississippi River allows.

Kimmel said she is involved in tagging these prehistoric fish and tracking their movements for research. Gar will cue on water levels to enter the refuge as the river floods and leave as it recedes in the late summer.

According to the Refuge rules and regulations, anglers can not harvest any alligator gar caught at St. Catherine Creek. These fish play a crucial role in the restocking efforts of other alligator gar populations in the Mississippi River basin.

“It is important to protect them. They come back every year and we know they are vulnerable to fishing pressure,” Kimmel said “We are lucky in Louisiana and Mississippi the population is at a good level but in other states, it is declining. In efforts to restore those populations, we catch adults from St. Catherine Creek and take them to a hatchery in Mississippi. They will spawn at the hatchery, and the fry are sent to areas where they are needed.”

As gar age, they eat other fish and can eat reptiles, birds, amphibians, and small mammals. They are opportunistic and serve as an apex predator. Gar keep species of fish in check. Alligator Gar will also eat species of gar, Kimmel said.

When she was growing up, she said gar got a bad rap from fishermen. They would be thrown onto the bank by anglers because they ate the game fish.

A lot of states are having to work on educating the public about garfish. She said the general public perceives them as unwanted and bad. While gar can look scary with armored skin and sharp teeth, they pose no threat to humans.

Kimmel said Alligator Gar are pretty docile while being handled during research trips. In the wild, they do not pose a threat to humans wading or swimming.

They have toxic eggs to prevent wading shorebirds, small mammals, and crustaceans from eating them in spawning habitats.

Alligator Gar can live for 70-85 years. The world record was caught in Mississippi. It weighed 327 pounds and was aged to be 99-plus years old, she said.

“The whole family of gar are ancient. The species have been around for 100 million years,” Kimmel said. “They swam with the dinosaurs.”

In addition to Alligator Gar, Longnose, Spotted and Shortnose Gar swim in the waters of the Mississippi River basin.

Garfish tend to roll at the surface of the water to breathe oxygen because they often live in low oxidized environments, she said. Guests at the refuge can also see them gulp air at the surface. Guests can see these fish cruise in the water as they slowly look for prey.

What to do if you catch a gar

Juvenile Alligator Gar are similar in appearance to medium-sized Shortnose Gar. An angler can confuse their identity. Kimmel said anglers could check their teeth for the second row of teeth. Alligator Gar will have a second row while Shortnose will not.

“Not every gar is an Alligator Gar. They can be easily confused,” Kimmel said. “If you catch a juvenile Alligator Gar by accident, release it as quickly as possible. You can safely remove the hook or cut the line close to where it is attached and get it back in the water.”