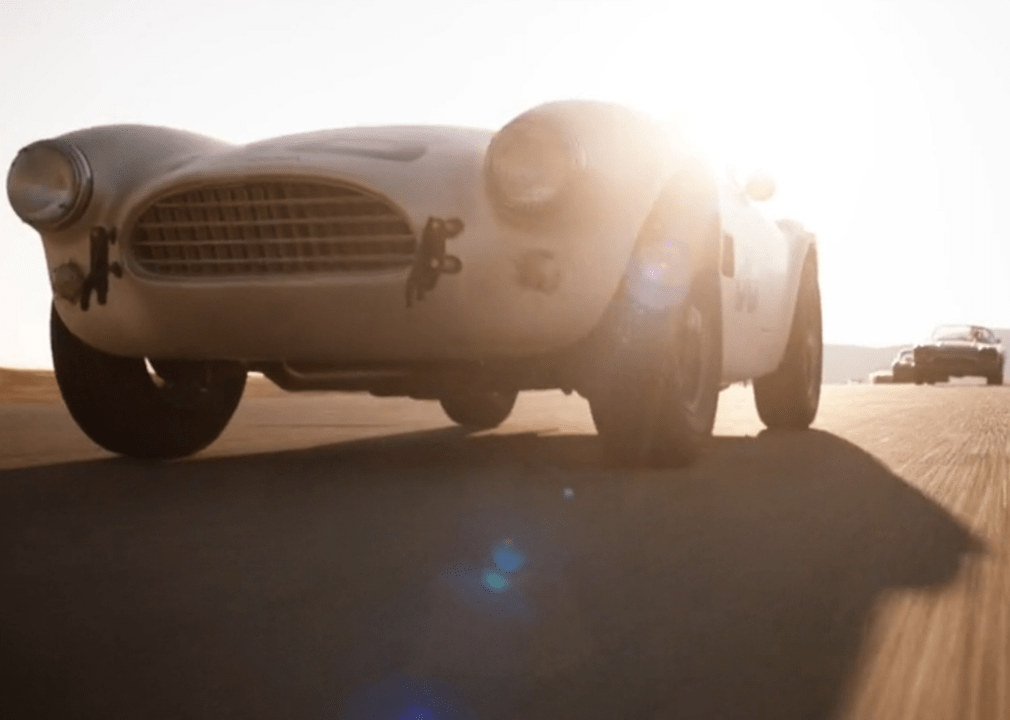 Car races promise the roar of the crowd, the sound of revving engines, and the excitement of watching cars race for the finish. When captured on film, audiences everywhere can watch these car-racing scenes from the comfort of their living rooms, or on the big screen at a local movie theater.

Stacker took a look at the history of car racing on-screen and compiled a list of 15 films with the greatest race scenes. Now, having a great racing scene or two doesn’t mean the rest of the movie is great, but all of these titles are well worth your while for the thrill of the race at least. IMDb scores and Metascores are provided for popular and critical context.

The films on this list feature cars of every make and model, from a Dodge Tradesman van turned into an ambulance to a 1932 Deuce Coupe. They race on tracks around the world, streets in American towns, and through deserts in the dystopian future. Whether a drag race, a police chase, or a cross-country competition, these scenes are some of the greatest ever filmed. From the documentary about a three-time Formula One champion, to the coming-of-age film about a dying Texas town and the kids who cruise the main strip, this list features something for everyone.

This list will not only show you some of the greatest scenes, but it will also prepare you for the upcoming Daytona 500. This epic NASCAR race will be held at the Daytona International Speedway on Sunday, February 20, 2022, and broadcast on FOX.

You may also like: Best and worst Jennifer Lopez movies 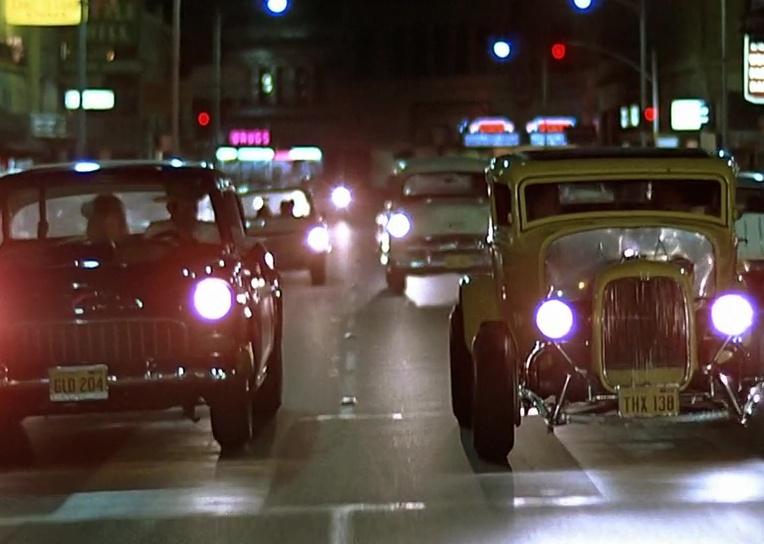 In a California town, a group of teens cruise the strip on the night of their high school graduation. As night fades, the gang gathers to watch a local against an out-of-towner as John Milner (Paul Le Mat) races Bob Falfa (Harrison Ford) on Paradise Road. Milner’s yellow 1932 Deuce Coupe literally smokes the competition, Falfa’s black 1955 Chevrolet, which winds up veering off the road, flipping, and catching on fire. Frates Road in Petaluma, California, served as the real-life location for the race. 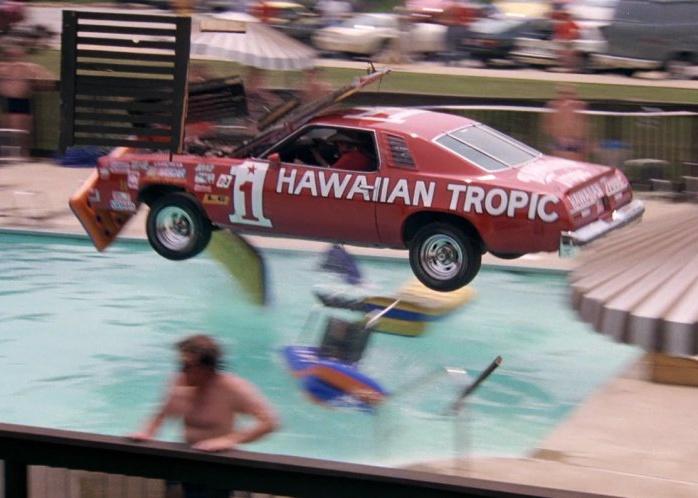 Burt Reynolds competes against a cast of eccentric characters in an illegal road race that takes them from one end of the country to the other. The fictional race is based on an actual event, the Cannonball Baker Sea-To-Shining-Sea Memorial Trophy Dash. The film features racing on land and sea, with one of the most well-known race scenes occurring in the film’s intro as a 1979 Lamborghini Countach LP 400S drives against the opening credits and the police chase it. Roger Moore drives an Aston Martin DB5, Burt Reynolds drives a Dodge Tradesman van (converted to an ambulance), and Mel Tillis and Terry Bradshaw drive a Chevrolet Chevelle Laguna. 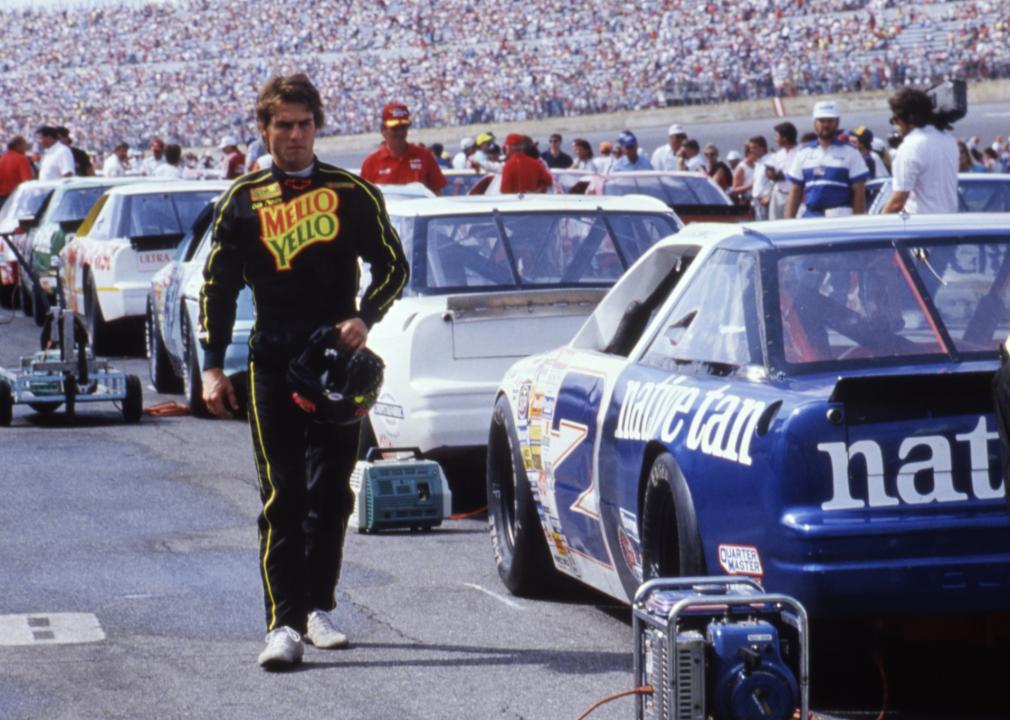 This racing film stars Tom Cruise as hot-headed race car driver Cole Trickle. In one memorable race scene, Trickle hits a few snags, including a jammed accelerator and a shot transmission when racing against rival Russ Wheeler (Cary Elwes). When he returns to the race, Wheeler assumes Cole will “go high,” as he always does, but Cole surprises Wheeler and cuts past him on the inside. Cole wins the race driving a #51 Mello Yello Chevrolet Lumina. 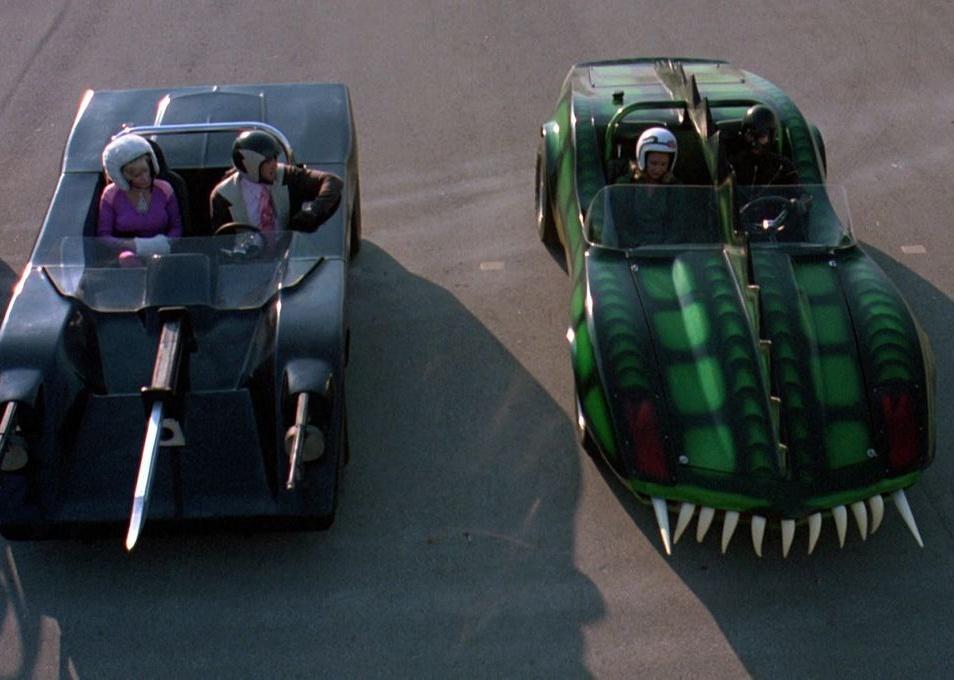 The violent Transcontinental Road Race takes place in a dystopian future where drivers compete to run down as many pedestrians as they can while gaining points for the brutality of each kill. David Carradine and Sylvester Stallone star as Frankenstein and Machine Gun Joe Viterbo. One epic race scene takes place against a desert landscape as Frankenstein drives through fiery explosions while trying to outrun a plane, which eventually explodes into the mountainside. Frankenstein’s alligator car has a row of fangs and resembles a Corvette. 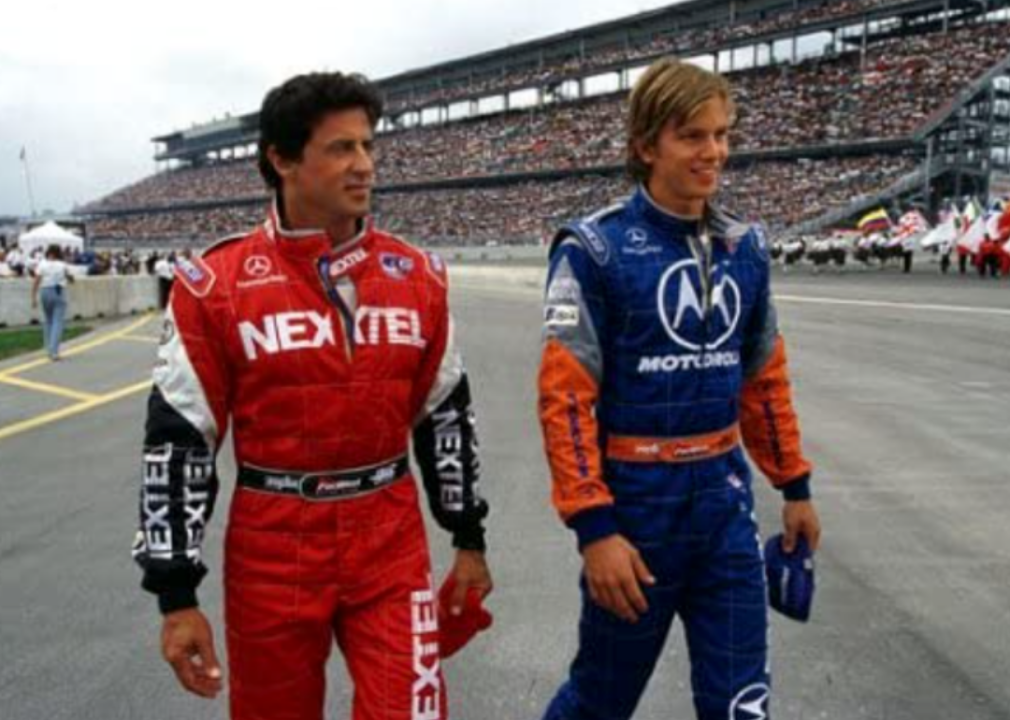 Rookie driver Jimmy Bly (Kip Pardue) is having a rough time and seems to have lost his edge, so former driver Joe Tanto (Sylvester Stallone) signs on to help Bly get his mojo back. The film’s CGI race scenes feature epic crashes. It’s the final race scene at the Detroit Grand Prix that is worth watching though. When Bly and Tanto go up against Beau Brandenburg (Til Schweiger), Tanto takes the lead but drops out in the final laps and Bly wins the race. 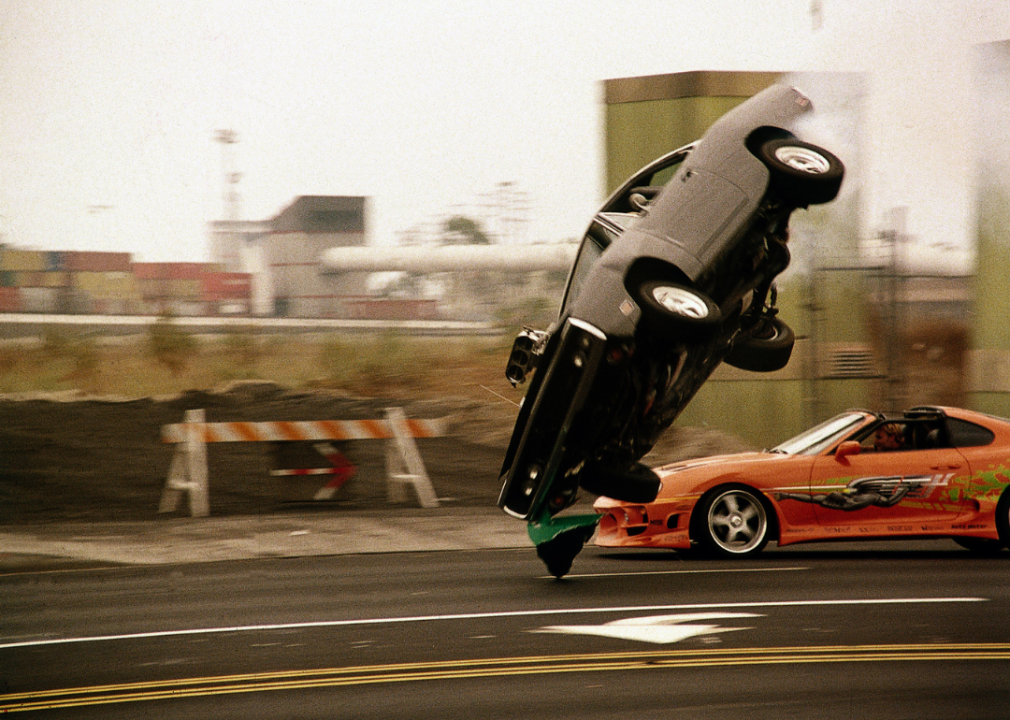 “The Fast and the Furious” is the first film in the franchise and features several legendary race scenes. In one scene at the end of the film, Los Angeles undercover cop Brian (Paul Walker) races street racer Dominic (Vin Diesel) as they both attempt to make it past an oncoming train. After they do, the black 1970 Dodge Charger that Dominic is driving flips several times before landing. It is these exciting street races that continue to drive the franchise. 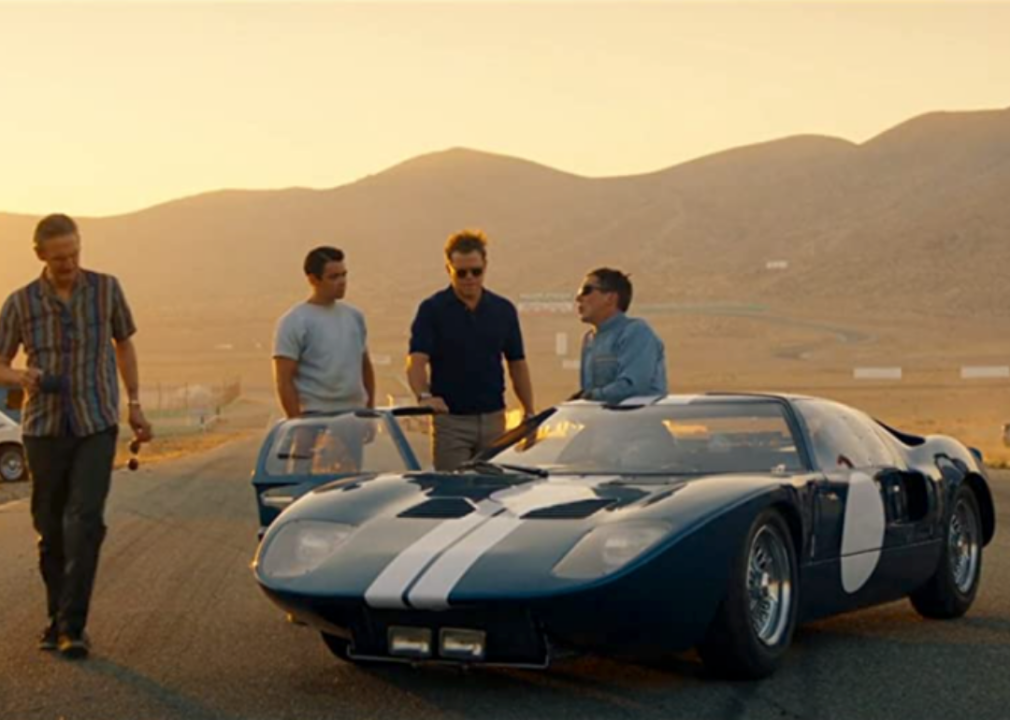 After Ford’s failed buyout of Ferrari, the automotive giant wanted to create a racing car to rival the Ferrari and win the 1966 24 Hours of Le Mans, an endurance race. Matt Damon stars as the car’s designer Carroll Shelby and Christian Bale appears as race car driver Ken Miles. One of the greatest race scenes in the film features Ken Miles as he pushes his Ford to full throttle and wins Daytona. The film uses a recreation of the Ford GT40 MKII for the 24 Hours of Daytona race. 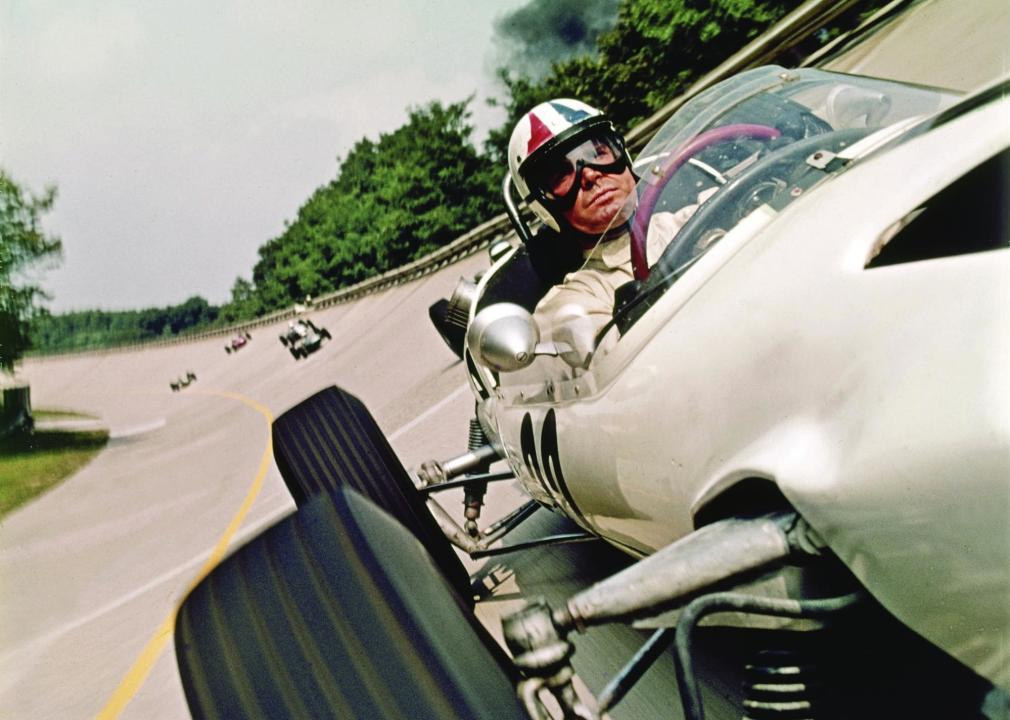 “Grand Prix” follows several drivers through a fictionalized account of the Formula One 1966 season. The race scenes feel like the real thing with pit crews, voice-over narration, loud audiences, and the ever-present press. Saul Bass’ title sequence is a cinematic feat that marries film techniques like split screen with unbelievable sound to create a remarkable race scene. The race also includes a masterful aerial tracking shot that follows the cars as they zoom past buildings. 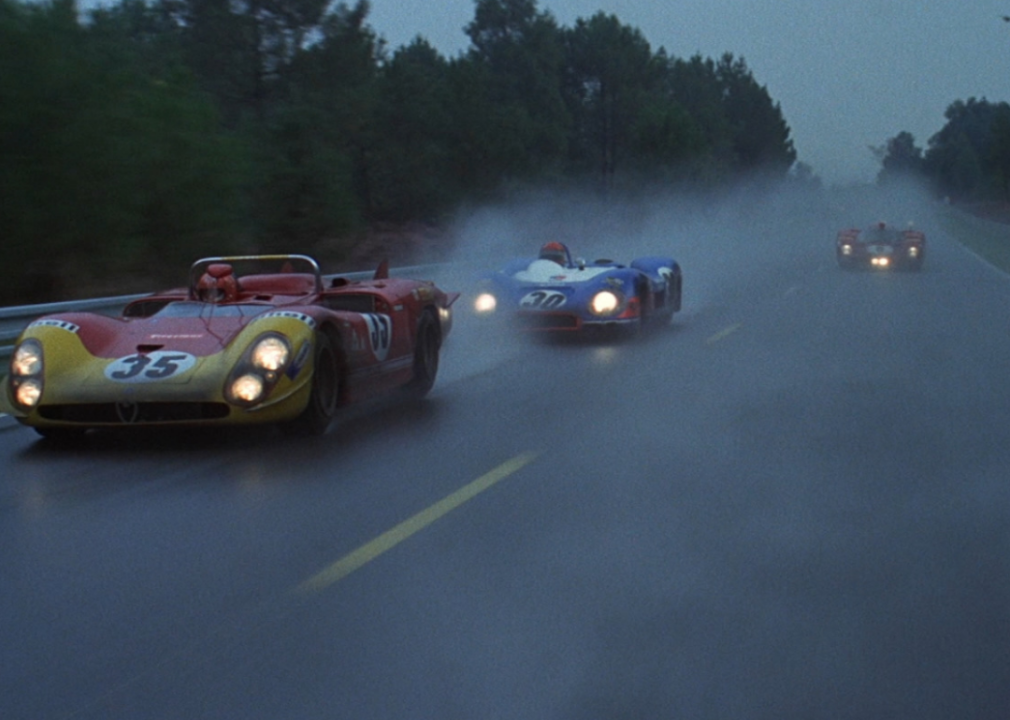 Two race car drivers, both champions, face off in France at Le Mans, one of the most difficult endurance courses ever. Erich Stahler (Siegfried Rauch) races in a Ferrari 512s while his opponent Michael Delaney (Steve McQueen) races in a Porsche 917. Not only does the film feature real footage from Le Mans and the 1970 race, but it also features some epic race scenes made just for the film. The opening sequence of the film, with its successive quick cuts between the starting flag, the ticking clock, the audience, McQueen’s eyes, and other race images, builds to the exciting start of the race. 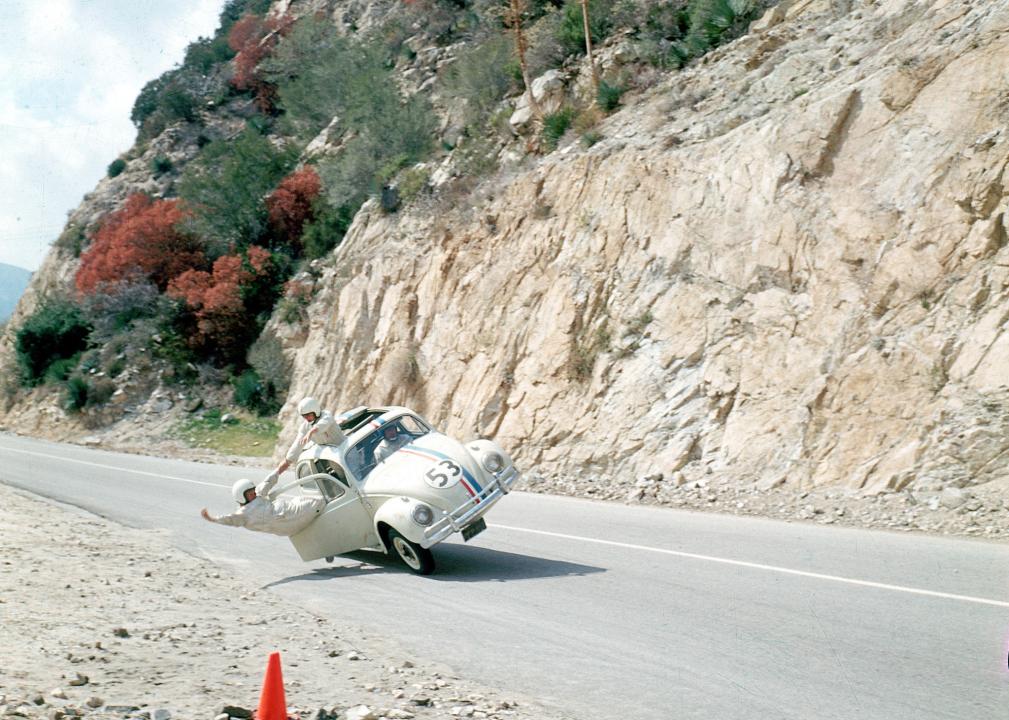 Down and out race car driver Jim Douglas (Dean Jones) begins successfully racing again with the help of a magical car, Herbie the Love Bug, a Volkswagen Beetle. Herbie’s original owner, car dealer Peter Thorndyke (David Tomlinson), decides he wants the car back after seeing Douglas and Herbie win their first race. Thorndyke challenges Douglas to race him for ownership of the car. At the race, Herbie proves he has a mind of his own and divides himself in two allowing his back end to take first place and his front end to place third. 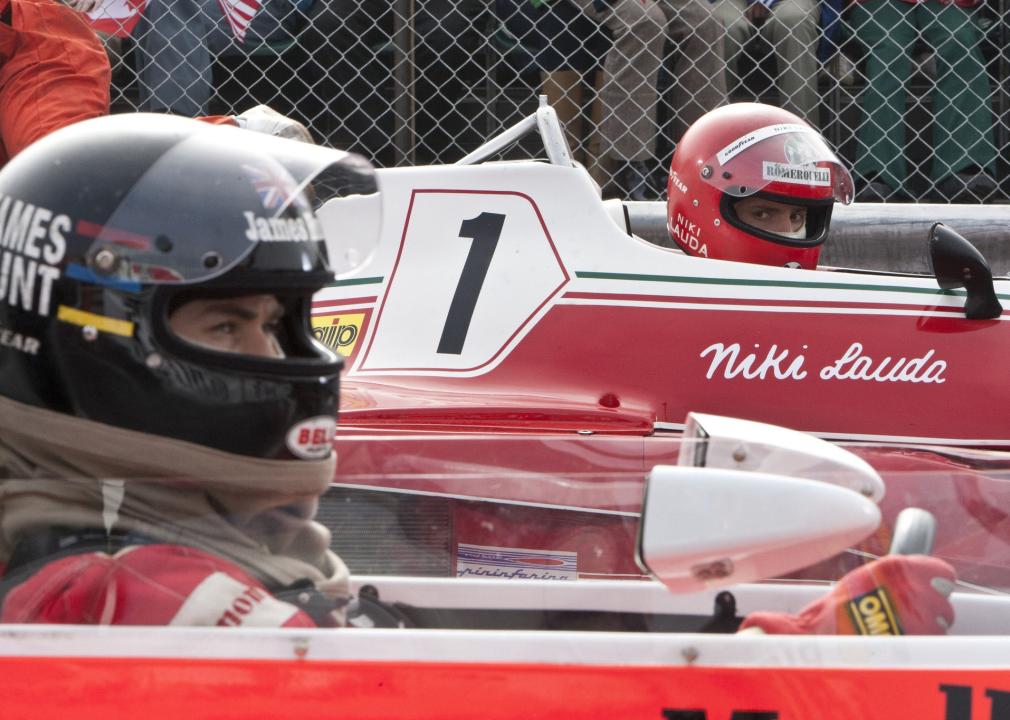 Two rival Formula One race car drivers, James Hunt (Chris Hemsworth) and Niki Lauda (Daniel Brühl) battle it out on the track in this film set in the 1970s. One legendary race scene features Hunt having issues with his tires and a broken gear lever at the 1976 Japanese Grand Prix. Though others try to convince him that he can’t win, he eventually rejoins the race and finishes third to become the World Champion. Lauda dropped out of the race after just one lap deeming the conditions too dangerous. 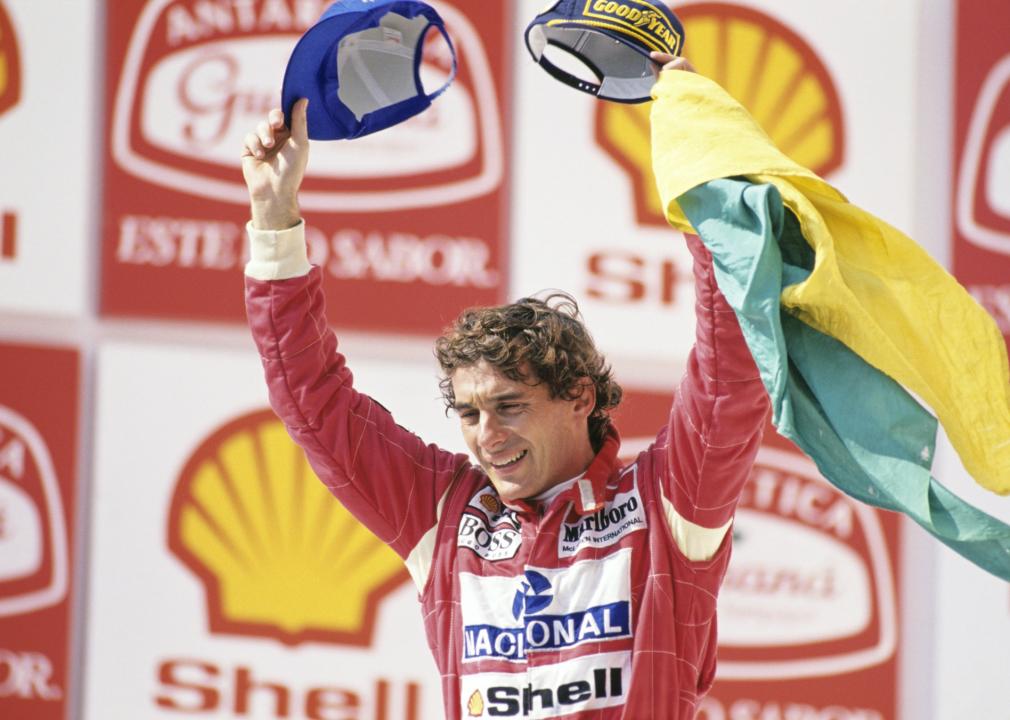 Three-time Formula One world champion Ayrton Senna, who died at 34, is the focus of this film. His death was caused by an accident at the 1994 San Marino Grand Prix when the car he was driving collided with a concrete barrier. The film contains race car footage from various races, including a collision at the 1989 Grand Prix in Japan with Senna’s greatest rival, Alain Prost. Footage of the 1991 Brazilian Grand Prix showed Senna’s unlikely victory after only his sixth gear was left functioning. 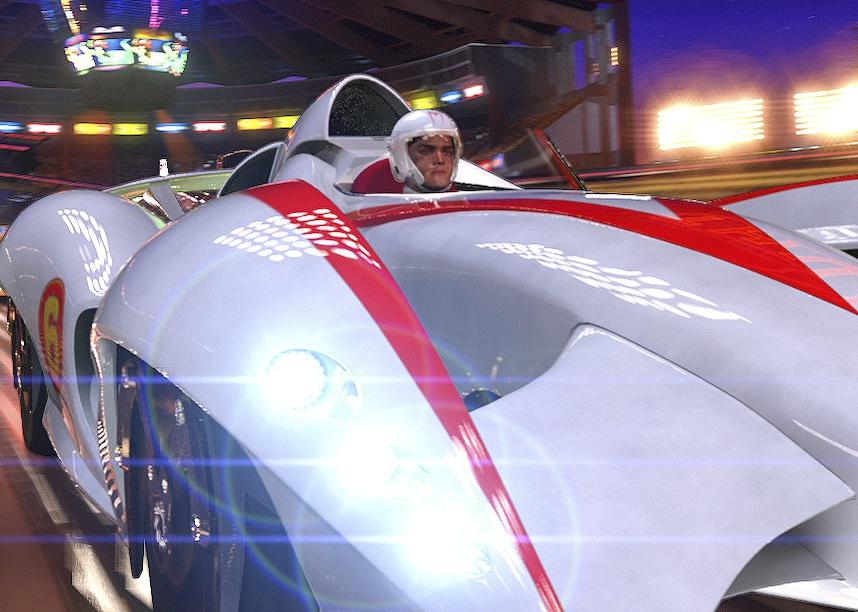 Based on the Japanese anime series, this film finds a man, Speed (Emile Hirsch), participating in the same cross-country race that killed his older brother. With an almost cartoon-like quality, the movie’s race scenes pay tribute to the 1960s animated series. The race track twists in impossible ways as the final race scene of the film finds Speed racing his T-180 against flashbacks, an array of bright lights, and a cheering audience to the unbelievable finish. 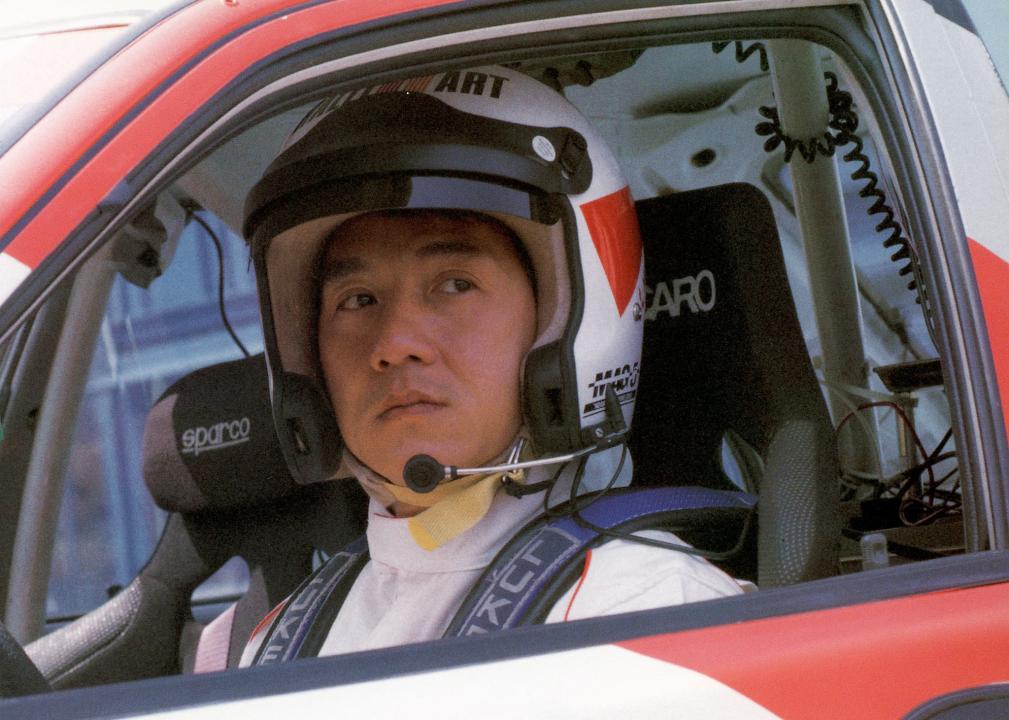 In the film, Foh (Jackie Chan), an expert mechanic, must race a criminal streetcar driver known as Cougar (Thorsten Nickel) to get his kidnapped sister back. The film’s first epic chase scene features Foh in a Mitsibushi FTO as he chases Cougar, who is driving a Nissan Skyline R32 GT-R. Foh leads Cougar right to the waiting police. 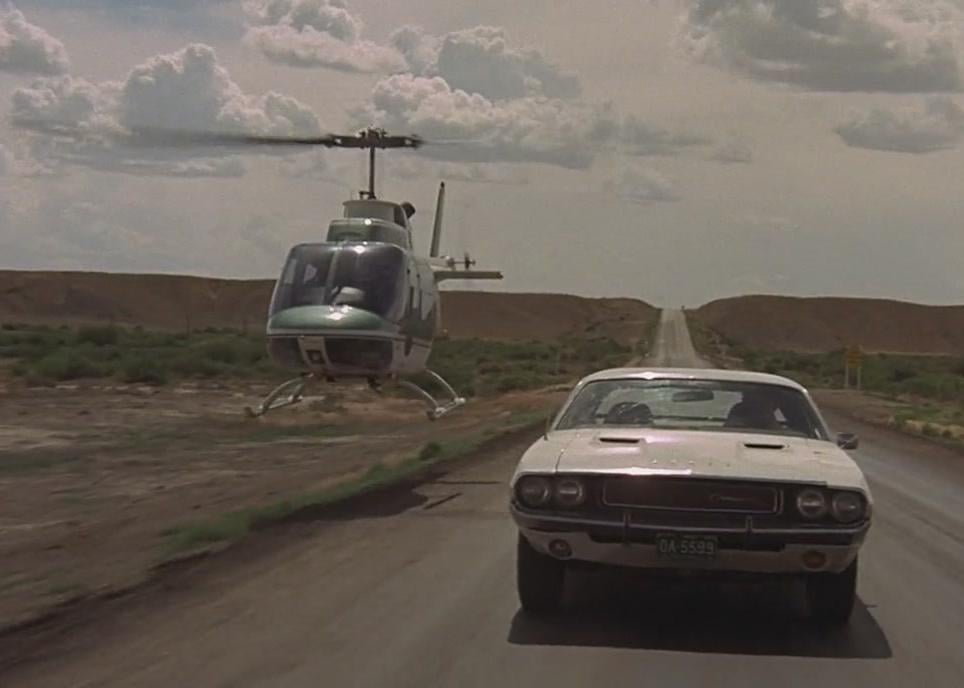 Based on a bet he made, car delivery driver Kowalski (Barry Newman) must transport a 1970 Dodge Challenger from Chicago to California in less than a day’s time. On his way, he faces various challenges, including a high-speed race with a Jaguar owner and multiple run-ins with the police. While the film features many race scenes with varying landscapes, fiery wrecks, and flipped cars, it’s the final scene that is the most intense. Kowalski drives the Dodge Challenger into two parked bulldozers, eluding the police and bringing his road trip to an end.

You may also like: 100 best Westerns of all time

How the ‘Great Resignation’ has impacted 10 industries