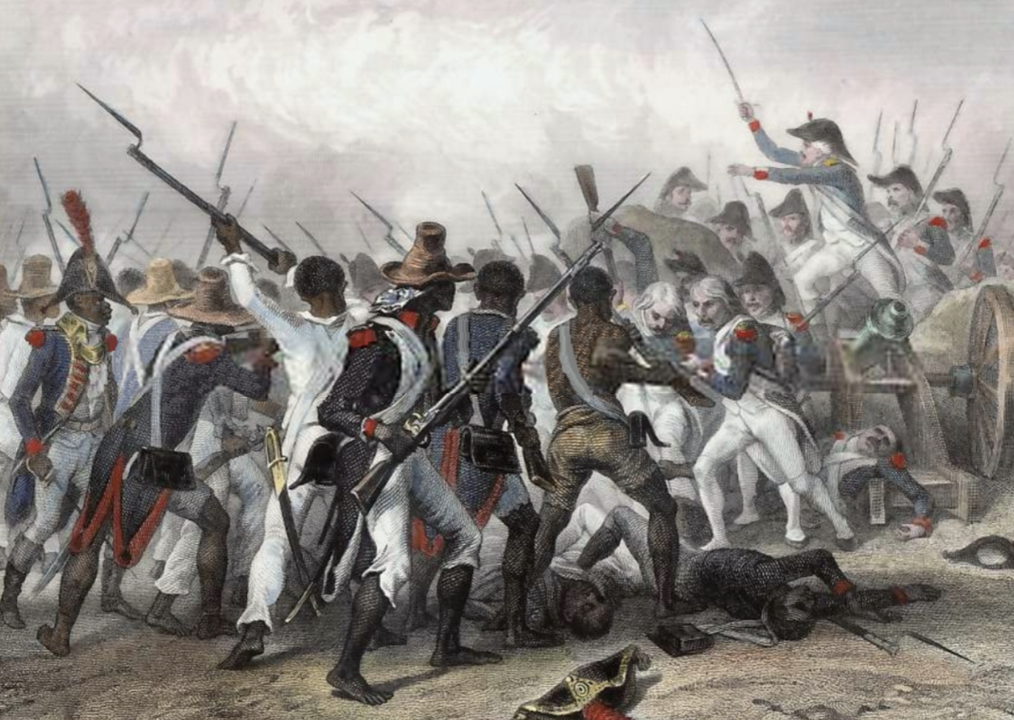 The framing of slavery in American history textbooks long conveyed enslaved people as individuals in passive acquiescence of their stations in life, or worse: claiming enslaved people were sad when slavery in the U.S. ended. Even today, central aspects of American slavery are not being taught in middle and high school, according to a 2018 report from the Southern Poverty Law Center, with many of these dated, offensive stereotypes still perpetuated. In fact, enslaved people planned and carried out hundreds of uprisings while slavery was legal—not to mention performing countless everyday acts of resistance and rebellion.

To get a more accurate picture of the resistance and uprisings of enslaved people in United States history, Stacker pored over primary documents, stories passed along through generations, and government records. The forthcoming list of five significant uprisings by enslaved individuals represents a tiny fraction of rebellious actions taken to fight an unjust, inhumane, and violent precedent that at the time was commonplace and perfectly legal.

The stereotypes perpetuated about Africans brought to the colonies against their will helped enslavers justify their cruelty and racism. George Washington, who enslaved hundreds of people, said during the revolutionary conflict that, should British tyranny not be fought, Americans risked turning “as tame and abject slaves as the Blacks we rule over with such arbitrary sway.” We’ve witnessed the same racist tropes countless times in the centuries since, whether in the pervasive hypersexualization of Black men or the widespread insistence among many household names—from Walt Whitman to Teddy Roosevelt—that white people are inherently genetically superior and have no choice but to meet the burden of “civilizing” the rest of the world’s population.

The true history of slavery in the United States is story after story of perseverance. People held in bondage bravely fought with the British during the Revolutionary War. Characterized as lazy and unrefined by their white enslavers, enslaved people in American colonies established from the outset artistic and musical traditions that still stand as a throughline of American culture today.

Rather than accept their fate, people held in bondage from the 1600s through the late 19th century performed regular acts of rebellion. From breaking tools or slowing down work to setting buildings ablaze or running away, enslaved people frequently figured out ways to sabotage the work they were being forced to do and attempted new ways to claim their freedom. At George Washington’s Mount Vernon, a full 7% of the enslaved population tried to escape at some point while being held there against their will.

Uprisings among enslaved people represent the most extreme means of protesting slavery. Rebellions were difficult to plan and even more difficult to pull off for obvious reasons, ranging from few resources (including weapons) to sheer numbers. The fact that rebellions were still attempted speaks to the fortitude of enslaved people to pursue their freedom no matter the cost.

Throughout history, instances of rebellion occur most frequently during times of political and economic upheaval, and times when enslaved people had a rare numbers advantage. Virtually all conspiracies and insurrections ended with mass killings of Black men and women, often by gruesome and grotesque means.

Keep reading to learn more about five of the most significant uprisings by enslaved people in U.S. history.

[Pictured: On Nov. 9, 2019, in New Orleans, reenactors under the direction of artist Dread Scott retrace the route of the 1811 uprising, one of the largest rebellions of enslaved people in U.S. history.]

You may also like: Political cartoons from the last 100 years 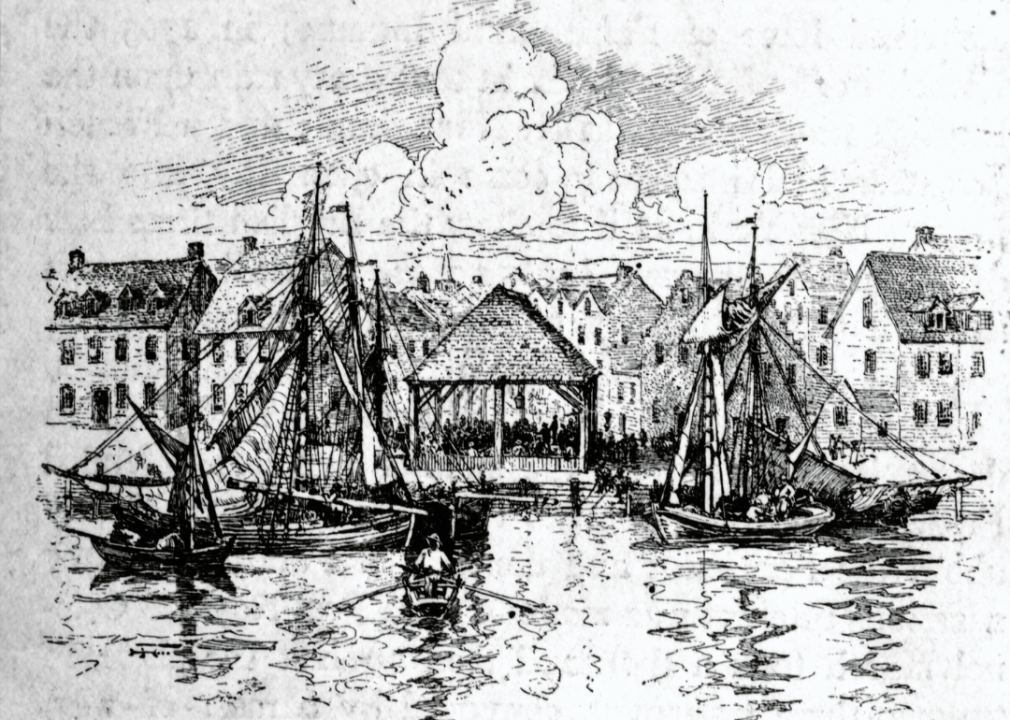 Slavery came to New York City in 1626 when Dutch settlers brought with them 11 African men and, two years later, three African women. The city was home to the second-busiest slave market in the colonies, behind only Charleston, South Carolina. New York City was the unnamed capital of American slavery while, ironically, also being central to the eventual abolitionist movement. Throughout the colonial era, 41% of households in New York City enslaved people while 6% did so in Philadelphia and 2% in Boston.

Paranoid about uprisings, a slave market was constructed in 1711 at the intersection of Wall and Water streets, a location where enslaved people had previously gathered during their free time. The market was used to keep enslaved people bouncing between homes, rendering them unable to be anywhere long enough to plot a rebellion.

A year later, in the New York Slave Revolt of 1712—one of the two bloodiest uprisings by enslaved people in U.S. history—23 enslaved Africans met at the East River before setting nearby homes ablaze. White homeowners trying to escape, along with those coming to put the fires out, were attacked. Nine white people were killed and six injured before the uprising was halted. As many as six of those caught died by suicide. Around 70 enslaved Africans in total were arrested and imprisoned. Almost two dozen were convicted and executed, including one pregnant woman, with most of those who were put to death burned alive.

Following the revolt, rules kept enslaved people from gathering in groups of three or more. Nearly 30 years later, in 1741, at a time when New York had the second-largest enslaved population in the colonies, nearly a dozen more fires were set by enslaved people throughout New York City as well as in New Jersey and on Long Island. More than 100 enslaved people were arrested, 13 of whom were burned at the stake while hangings were carried out against 17 Black men, two white women, and two white men.

The slave market on Wall Street was dismantled in 1762. After being legal and common since the 1600s, slavery was finally made illegal in New York State in 1827. 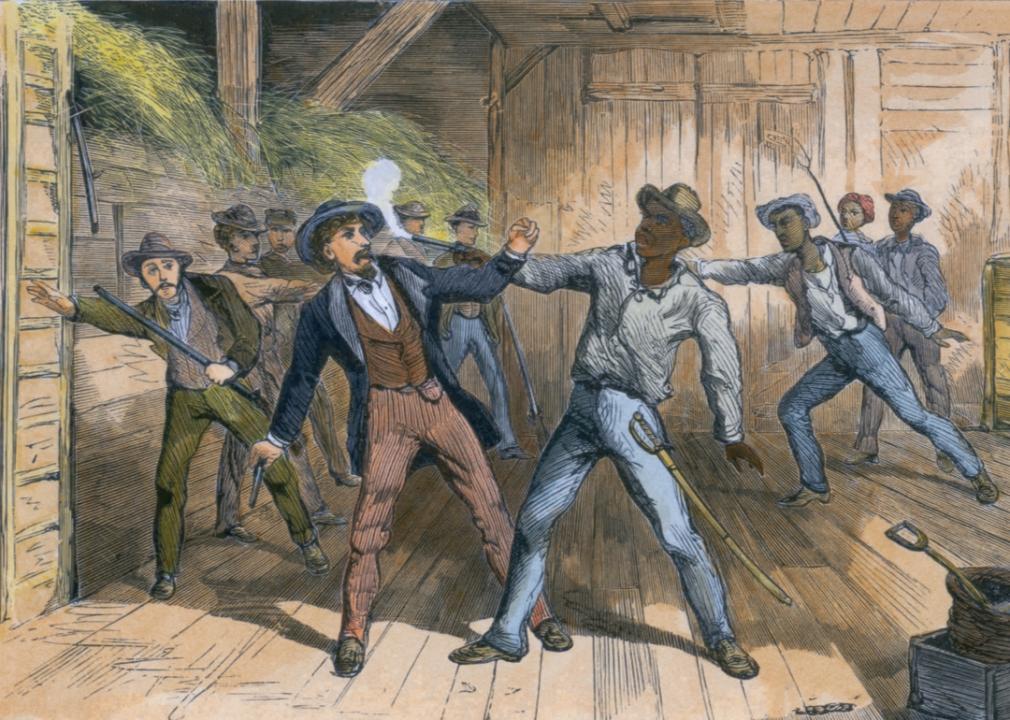 The Stono Rebellion came amid a period of intense anxiety for Southern plantation owners in South Carolina who were eyeing a smallpox epidemic in the region, a massive rice crop threatened by hurricane season, and a Spanish Florida proclamation that tempted runaway enslaved people with freedom.

The rebellion, so named for the river it took place near, came on the heels of multiple other uprisings. Just one primary account was documented at the time; subsequently, secondhand reports, along with documentation by white people, also made it into the historical record.

The uprising began on Sept. 9 when 20 enslaved people gathered before traveling to a firearms store. The depot’s owner was murdered and guns were stolen by the rebels. The group then marched through St. Paul Parish, heading for Florida and their anticipated freedom. Homes were burned along the way and enslavers (and their families) killed. Some enslaved people joined the march while others hung back.

Ultimately, a white militia countered the marchers by killing and decapitating the enslaved men, crushing the rebellion. 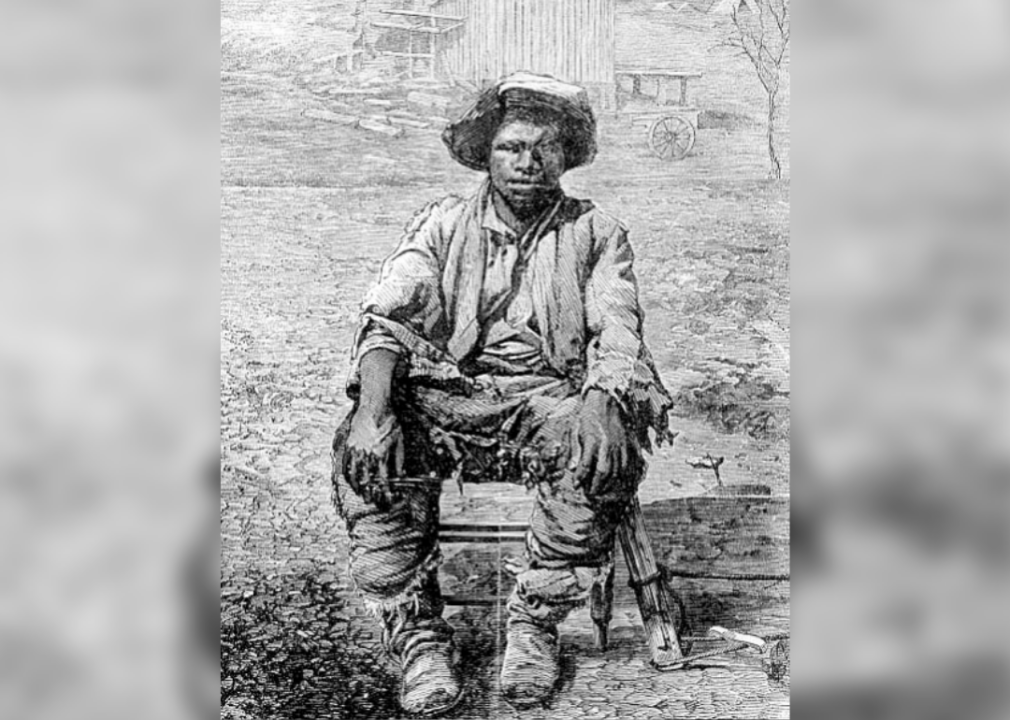 The plot to capture Capitol Square in Richmond, Virginia, and hold Gov. James Monroe hostage was hatched by an enslaved blacksmith named Gabriel Prosser, his brother Solomon, and a fellow enslaved man named Ben. The conspiracy was inspired by the Haitian Revolution around the turn of the 19th century.

In preparation, dozens of enslaved men were recruited throughout central Virginia. While they gathered weapons, Prosser fashioned swords and bullets for the rebellion.

Massive thunderstorms dropping heavy rain delayed the revolt and several nervous enslaved men told their enslavers about the plan. Around 65 enslaved men were arrested and tried, with ensuing testimonies heard by five justices without a jury. More than two dozen enslaved people were hanged, others convicted and sold out of the state, and some pardoned. Two enslaved people who told enslavers of the plot were rewarded with their freedom.

Prosser was hanged on Oct. 10 of that year. 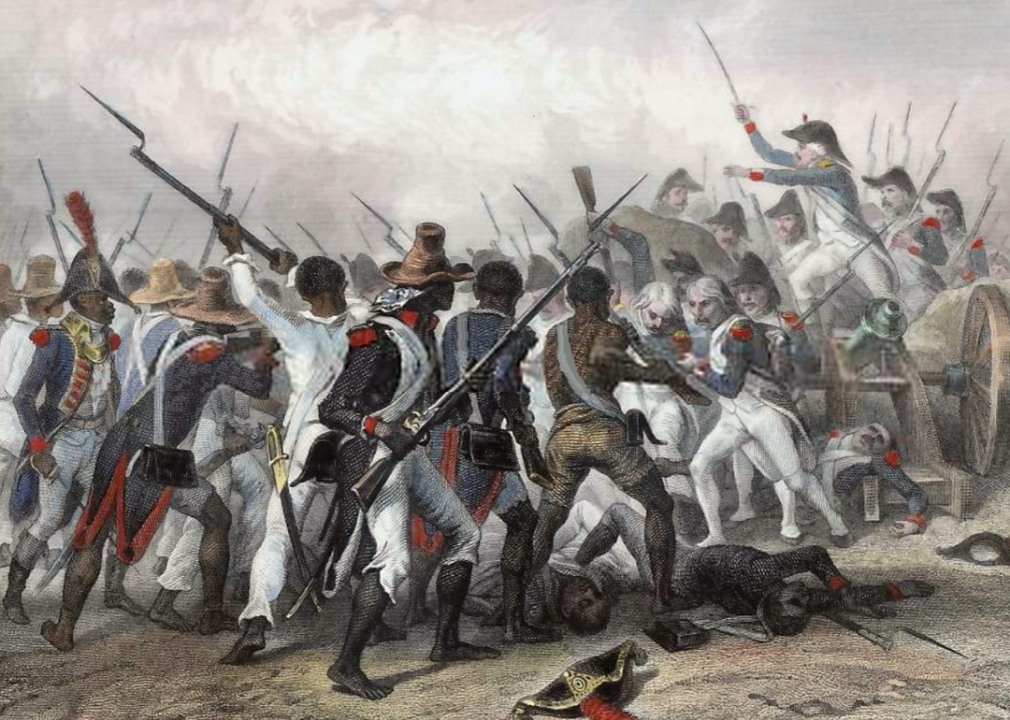 Andry’s Rebellion, named after Col. Manuel Andry, the owner of the plantation where the revolt began, occurred between Jan. 8 and 10, on the eastern bank of the Mississippi River about 30 miles north of New Orleans. Throughout the area, the Black population vastly outnumbered those who were white.

Inspired by the Haitian Revolution of 1791, the Louisiana rebellion—also called the German Coast Uprising—was led by an enslaved man named Charles Deslondes who worked on the Deslondes Plantation. His goal was to create an independent Black republic. The violence began with more than a dozen enslaved men and women—leaders of whom rode on horseback—arriving at Andry’s plantation and attacking him. Andry managed to escape and warn fellow plantation owners of the impending violence.

Rebels then marched parade-like toward New Orleans with a variety of weapons and a growing headcount, waving flags and banging drums. The group eventually numbered around 500. Territorial Gov. William C.C. Claiborne enacted a curfew and called in the militia. It took nearly 700 soldiers to subdue the rebels. In the end, two white men were killed by the rebels and nearly 100 rebels were killed during and after the uprising. Eighteen of the enslaved were found guilty and executed, their heads affixed to pikes to frighten other enslaved men and women. 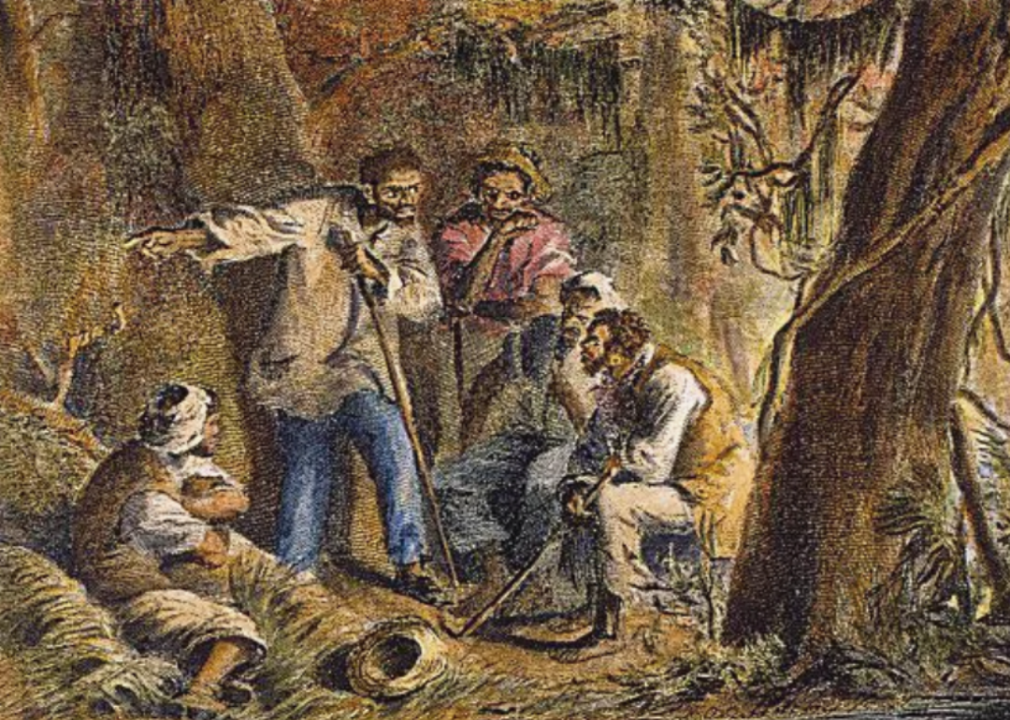 Despite hundreds of other revolts in the 18th and 19th centuries, Nat Turner’s did the most to destroy the pervasive stereotype of the time that enslaved people were subservient and at peace with their stage in life. But Turner’s uprising also brought together enslavers and anti-abolitionists who came together to make even stricter laws against education and group meetups for social or religious purposes.

In this August 1831 revolt (also known as the Southampton Insurrection), enslaved Virginians in Southampton County killed as many as 65 people. Turner and a small group of men began by murdering the entire Travis family, who had enslaved the men, before moving systematically between houses and killing every white person they found. As the murder spree continued, more enslaved people joined up. The rebels eventually numbered in the dozens and killed more than 55 white people.

A counterforce of white militia confronted Turner’s troop, capturing some and killing others. Turner escaped but was eventually captured on Oct. 30, and later hanged on Nov. 11. One of Turner’s executioners, William “Buck” Mallory, bragged so extensively about skinning Turner that the act was listed in Mallory’s obituary. More than 50 others were executed along with Turner for the uprising. Others were banished, and very few were acquitted. In the monthslong hysteria following the rebellion, nearly 200 Black people who had not been involved were killed by white mobs.