‘Y’all have to stand up’ – mother of Black FedEx driver who was reportedly chased, shot at calls on community to fight injustice 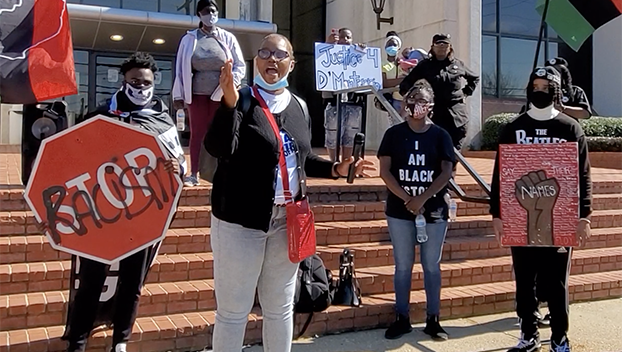 Sharon McClendon gestured to her son D’Monterrio Gibson as she fought to control her emotions. “What do you guys want to do?” she asked the crowd of approximately 80 people, some from Brookhaven, but most from other areas who had come to town in support of a joint NAACP-Black Lives Matter-Black Panthers march and rally.

“Stand up. Stand up,” McClendon said. “You’ll have to stand in solidarity. I’m from Bogue Chitto (and) I like Brookhaven … except the two people who tried to kill my son.”

On Jan. 24 Gibson had mis-delivered a package on Junior Trail NE, and returned to retrieve it. As he left with the package, Brandon and Gregory Case – who are white – allegedly pursued and shot repeatedly into the vehicle Gibson was driving, chasing him as far as Interstate 55.

A complaint was filed the following day and the father-and-son Cases surrendered to police Feb. 1. They were charged with conspiracy (Gregory) and aggravated assault/shooting into a motor vehicle (Brandon).

McClendon called on the citizens of the city to speak up to get this crime solved, as well as “many more here that need to be solved … they’re all going to come out.”

The one-mile march began just before noon at the Bi-Centennial Building on North Second Street and progressed to the front steps of the Lincoln County/Brookhaven Governmental Complex.

Several people spoke, some representing each of the organizing groups and some as individuals. All called for greater awareness and purposeful action – fighting racism within the boundaries of the law, looking for equal justice for all people.

As the rally was closing and protestors were preparing to march back to their starting point, Chief Collins arrived. He spoke with several protestors before approaching Gibson. The chief spoke to the FedEx driver as McClendon stood nearby and two members of the Black Panthers stood behind Gibson and Collins.

“What happened to you was wrong. It shouldn’t happen to anyone,” Collins told Gibson. “Hold your head up, because justice will be served.”

“My purpose for coming was to talk to this young man face-to-face,” Collins said after the rally, saying he also told Gibson he reminded the chief of his son. “As far as all these groups, the Black Panthers or any other radical group coming into my town, my name is Chief Collins, I don’t run from anybody.”

With Gibson and his mother surrounded by armed Black Panthers, the group marched back toward the Bi-Centennial Building. “No justice, no peace!” and “What do we want? Justice! When do we want it? Now!” were called out repeatedly by the group as they marched.