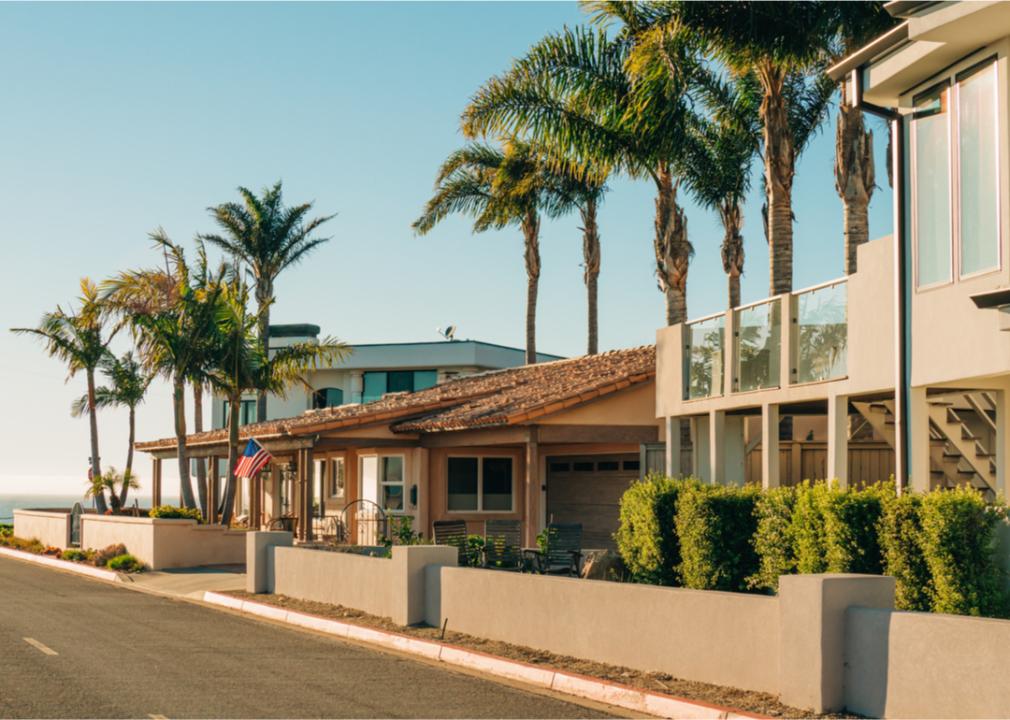 The American dream of buying a home in a quaint small town is still alive and well. In fact, a growing number of people consider rural living to be ideal: According to a Gallup poll conducted in December 2020, 48% of respondents said they would prefer to live in a town or rural area instead of a city or suburb—this represents a 9% increase from 2018. Rural areas also had the highest level of inbound moves in 2021, according to data from the National Association of Realtors.

Of course, a small town in a great location will always be more popular than one that’s truly remote. That’s where this list of the best small towns on the West Coast comes in handy. To compile this list, Stacker referenced Niche’s 2021 Best Places to Live study, narrowed the results to the West Coast, and narrowed them further to places under 5,000 residents. Niche calculated the best places to live based on cost, safety, weather quality, access to healthy living, and other factors.

While this data is the most current available, some housing statistics Niche uses to calculate its rankings — such as median home values and housing costs — are not entirely reflective of the current housing market. Since these numbers are subject to frequent changes and housing represents 5% of Niche’s total ranking, those statistics are omitted from forthcoming data points and do not detract from Niche’s overall assessment of the best places to live. For each town, Stacker included the town’s resident population along with figures for owners, renters, and median household income. Whether you’re considering a move or just want a peek into what small town life could be like, this list will certainly inspire your Zillow searches. 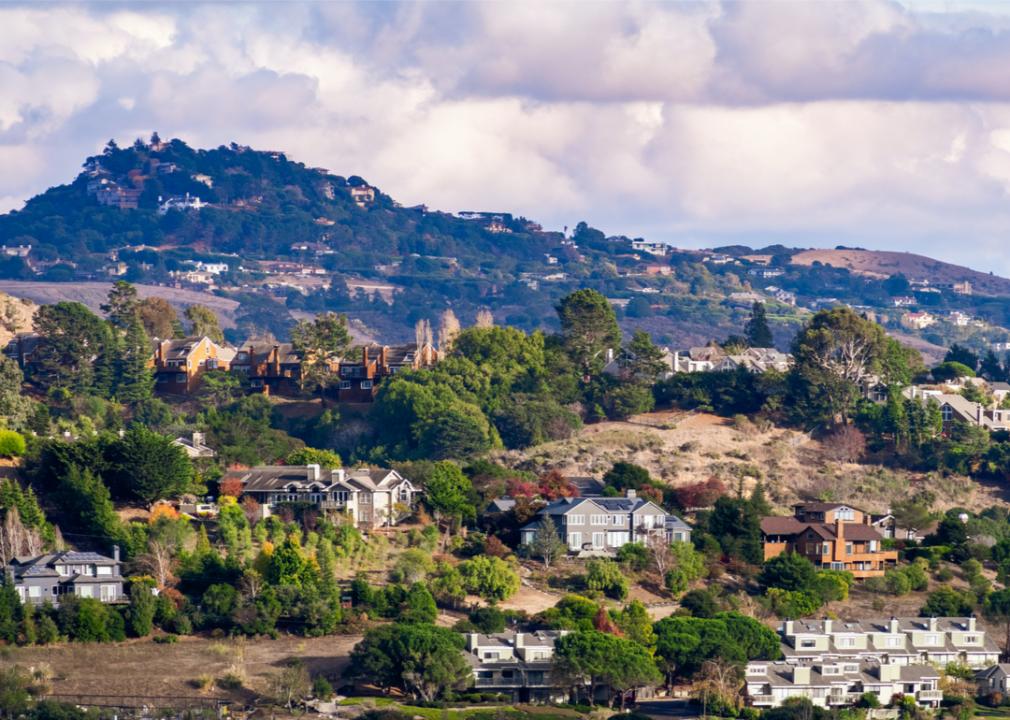 Located just a few miles north of the Golden Gate Bridge, this community is well-positioned for workers who need to commute to Bay Area offices. Marin City’s history begins during World War II, when the land was used for temporary housing of 6,000 shipyard workers who built tankers and liberty ships in nearby shipyards. Though the town sits within affluent Marin County, the median household income in Marin City was less than half the countywide median in 2018. 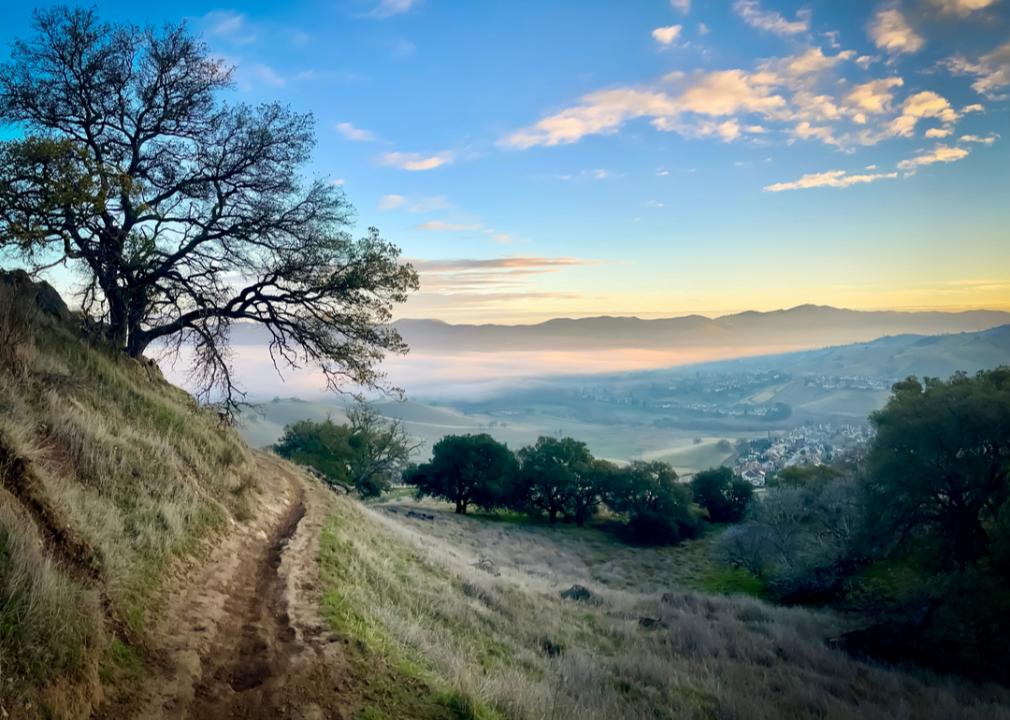 This Contra Costa County town was a bustling commercial hub in the 1850s, receiving shipments of grain on cargo ships that would sail six miles up Walnut Creek to Pacheco’s warehouses. However, the environmental effects of clear-cutting redwood forests and overgrazing of pastures, combined with a huge flood in 1861 that was quickly followed by a multi-year drought, eventually caused Walnut Creek to fill with silt and sand, making shipping impossible and beginning Pacheco’s transition into a sleepy residential town. 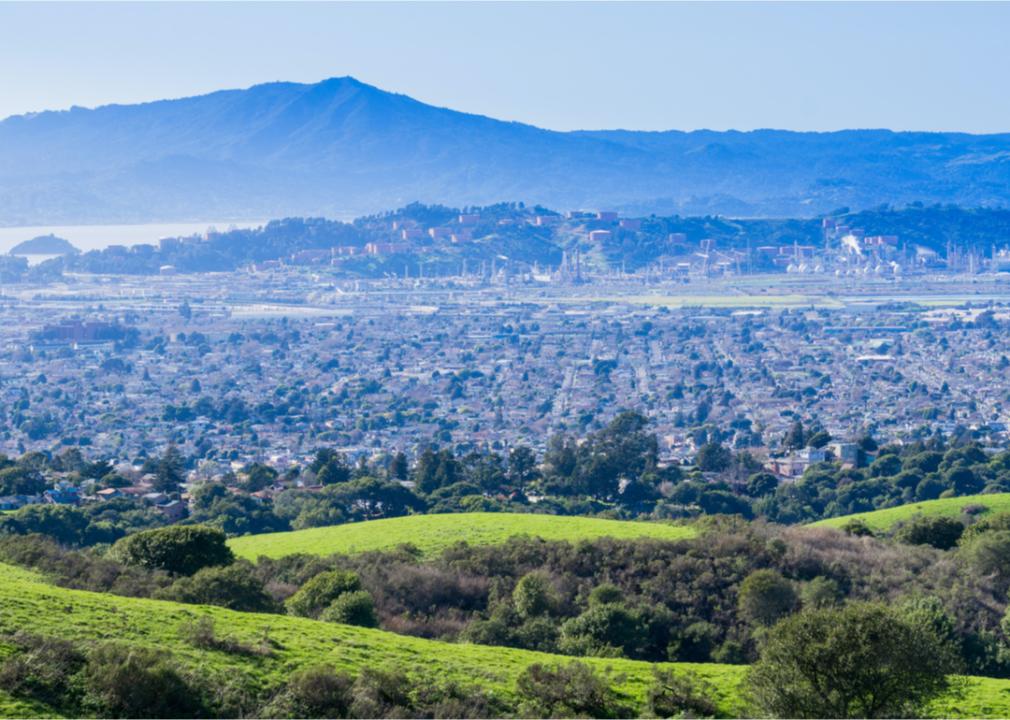 One Oakland Tribune advertisement from 1913 called East Richmond Heights “the garden of the gods.” Though that slogan might have been exaggerated to sell tracts of land, this quiet, small town still ranks highly for its diversity and family-friendly lifestyle. 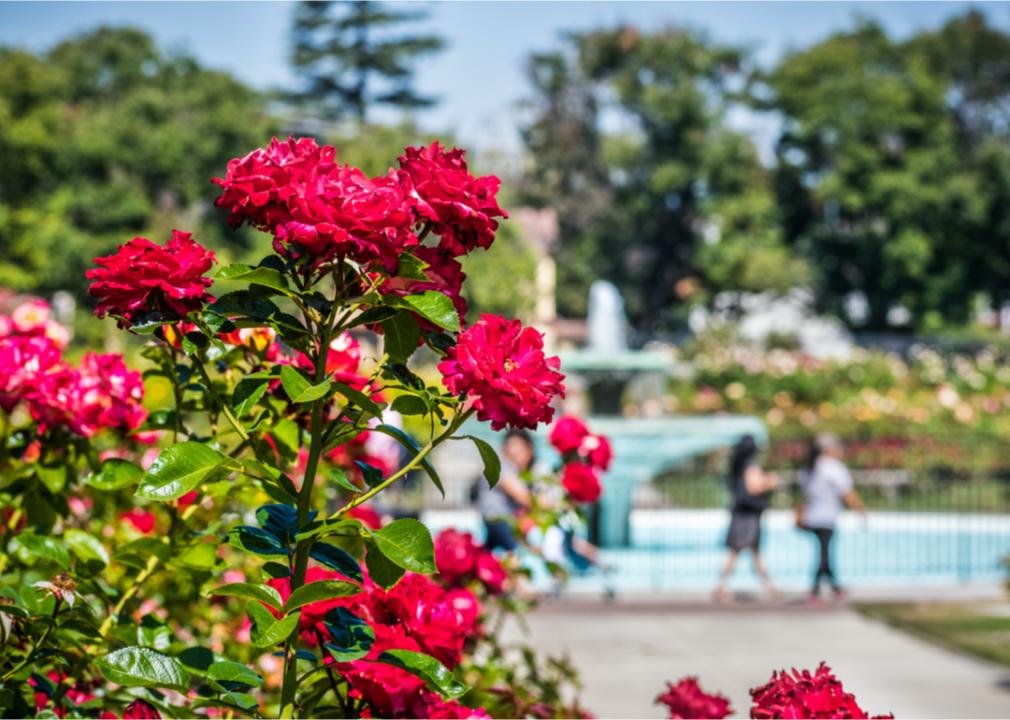 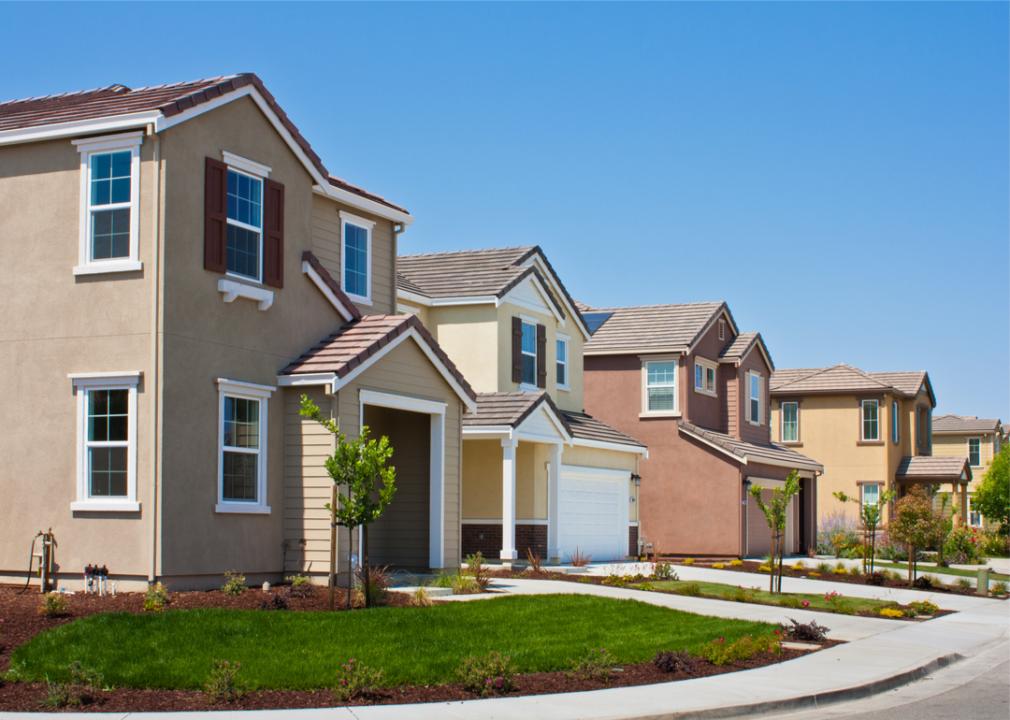 First founded as a housing cooperative in 1946, Ladera has a colorful history. The Peninsula Housing Association — the group of 262 members behind the purchase and development of the land — ran out of money before they could build the community they had dreamed of. Before the land could be sold to a developer, the four non-white families were forced to withdraw from the investment. Only white people were allowed to buy homes in the resulting development — a requirement that remained in the housing rules until 2021.

You may also like: Best places to retire on the east coast 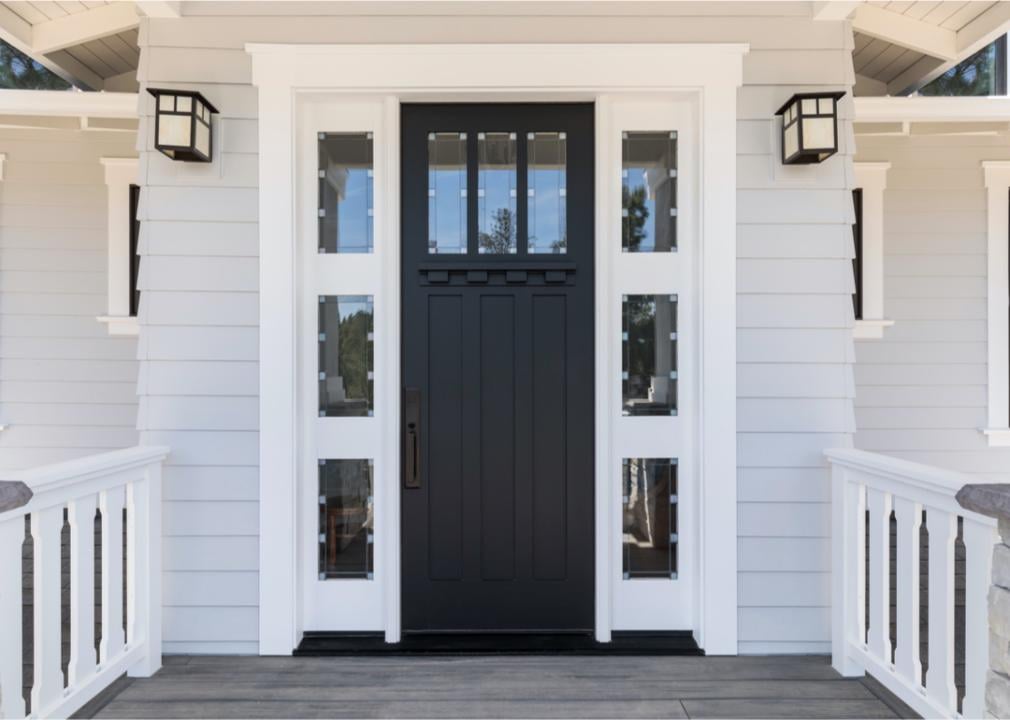 Though Portola Valley sits on top of the San Andreas Fault, the potential for seismic activity has not hampered the town. What is now known as Portola Valley began as a logging town community called Searsville. Once all of the redwoods had been cleared, the logging companies deserted Searsville and a collection of small farmers and a few wealthy estate owners moved in. 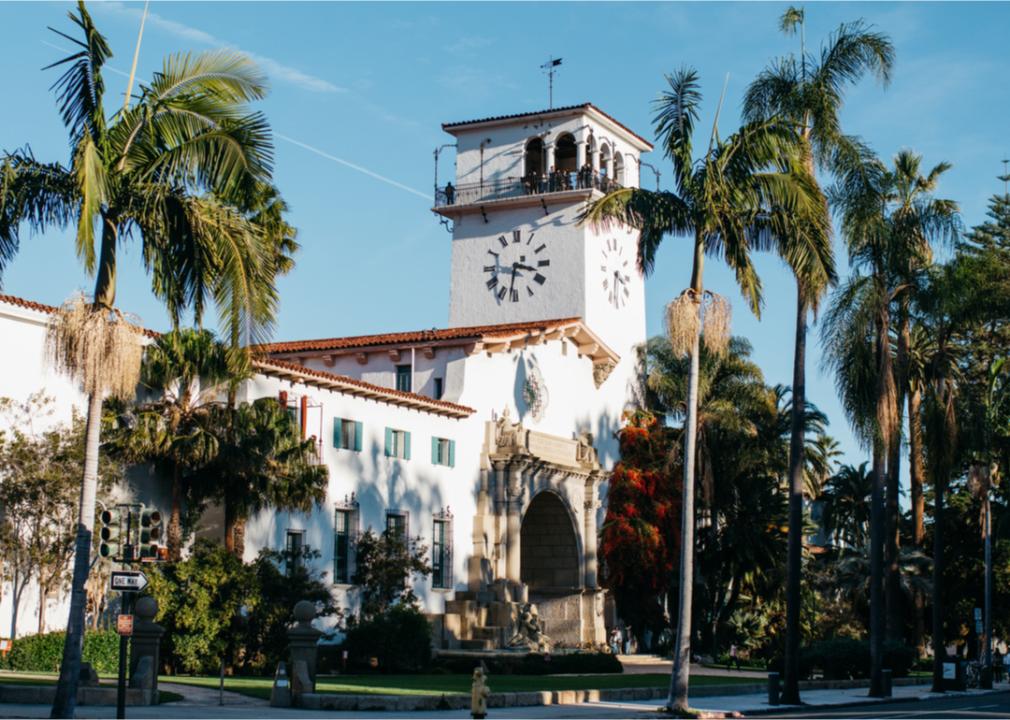 This suburb of Santa Barbara is named for nearby Old Mission Santa Barbara, founded by Spanish Franciscan friars in 1786, and the dramatic canyon landscape. Visitors flock to this neighborhood to check out the lush Santa Barbara Botanic Garden and several popular hiking trails. 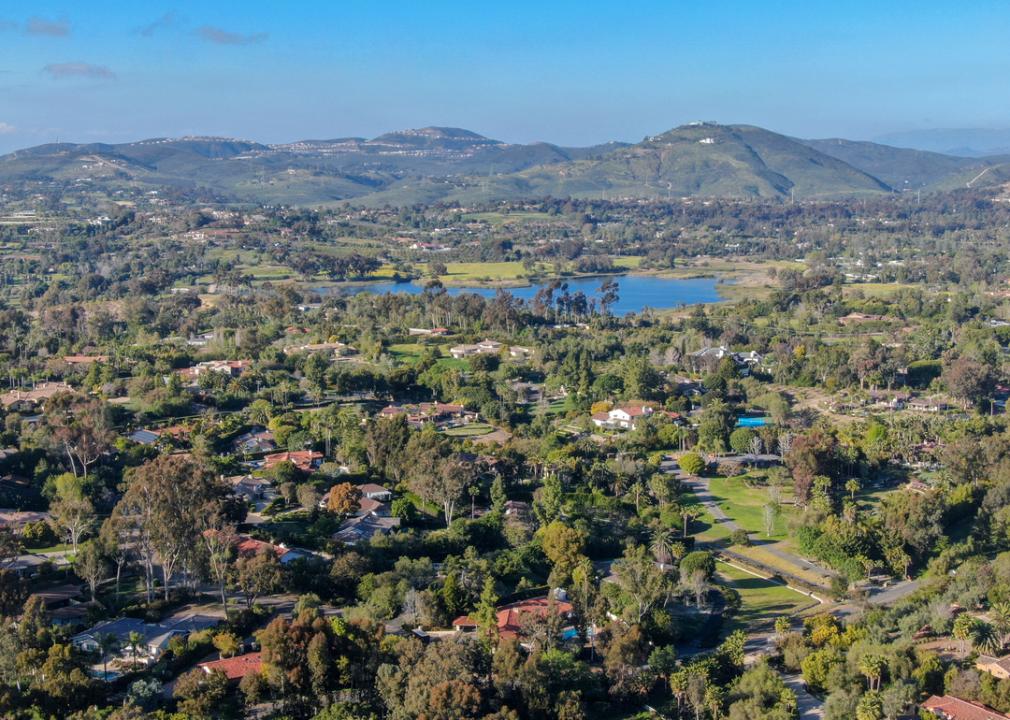 Rancho Santa Fe’s history dates back to before California’s statehood, when Mexico’s Governor Pio Pico awarded the area in a land grant to San Diego’s first mayor Jose Usuna in 1840. In the early 1900s, the Atchison, Topeka & Santa Fe Railroad company bought the land and planted eucalyptus trees to use as railroad ties. After that experiment failed, the company decided to turn the land into a residential development, and Rancho Santa Fe as we know it was born. 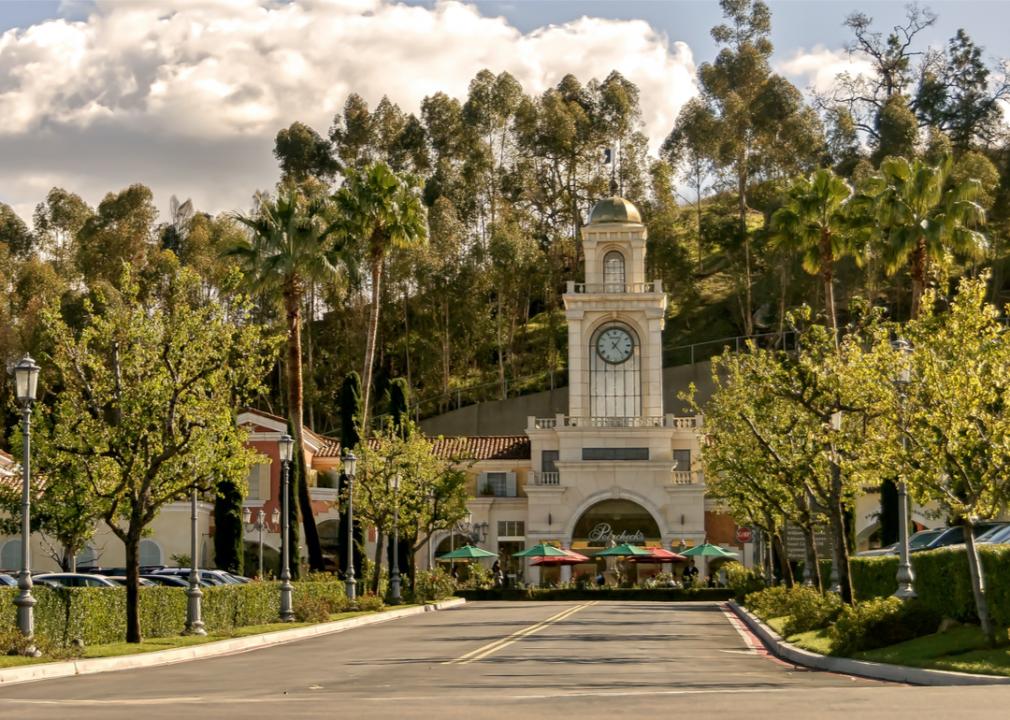 Known for celebrity residents like Kim Kardashian, Miley Cyrus, and The Weeknd, Hidden Hills offers a rarefied version of a small town lifestyle. This gated residential community developed in the mid-1950s boasts an extensive network of equestrian trails — some residents even pick up their kids on horseback. With so many A-list celebrities in the community, Hidden Hills also takes privacy extremely seriously. The community has even banned Google’s photography vehicles from recording the area for Google Street View. 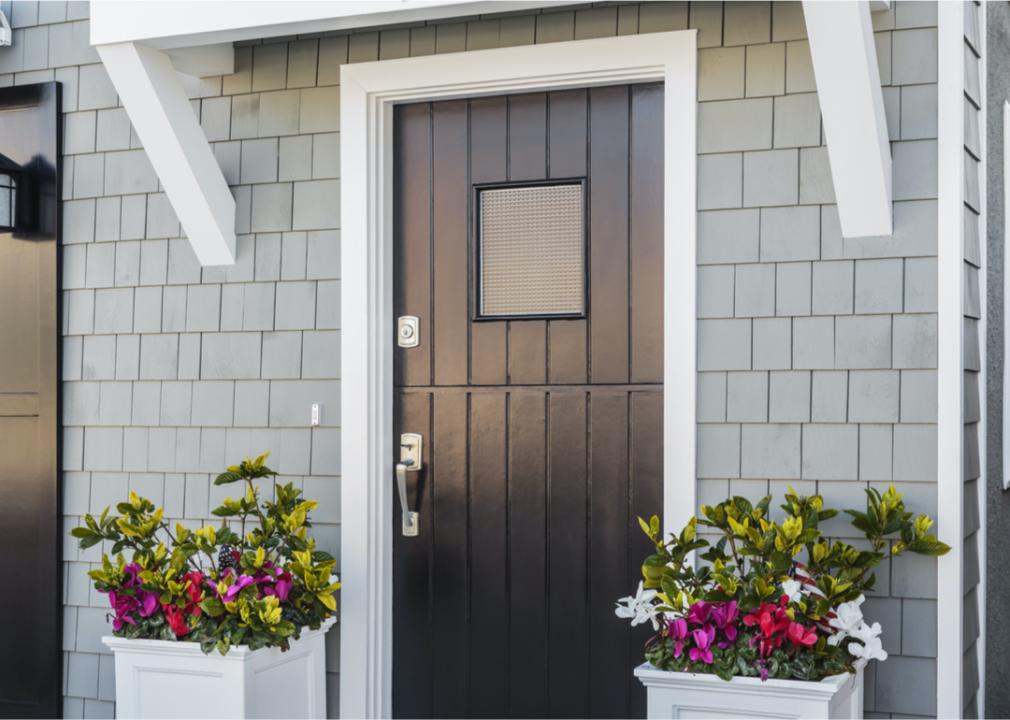 This small town in Santa Cruz County was originally known as Tuxedo Junction, a stop on the South Pacific Coast Railroad with a well-known resort. Today, in addition to residential homes, Mount Hermon also hosts a Christian youth camp of the same name. 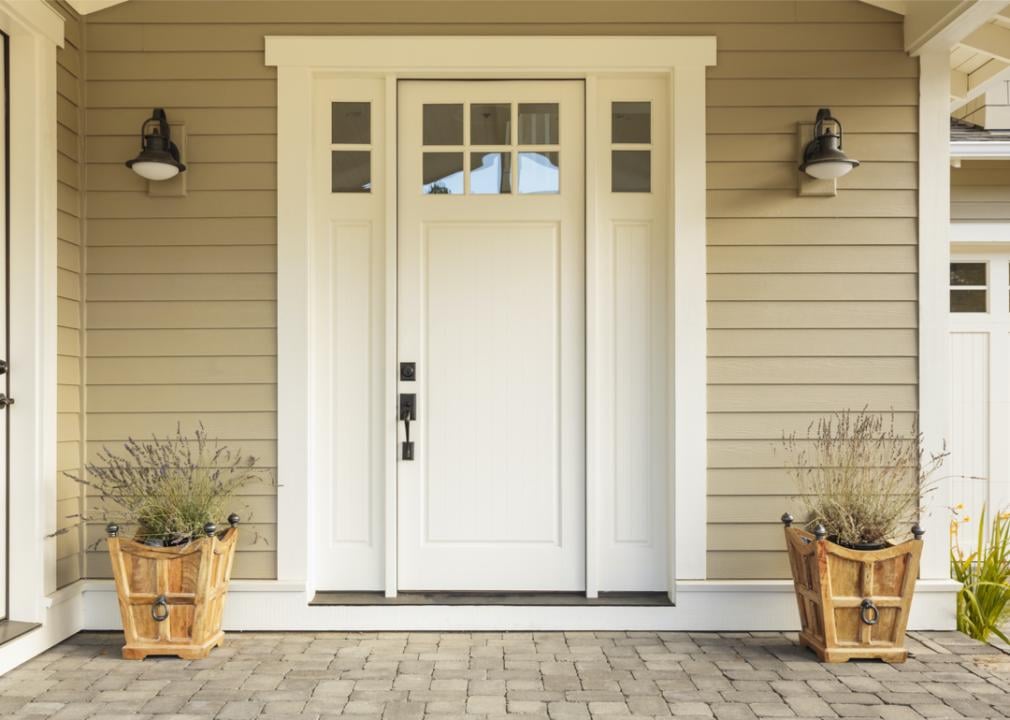 With just 750 homes, Sleepy Hollow is a quiet, peaceful Bay Area town beloved by equestrians and hikers alike for its proximity to two nature preserves. Fun fact: During World War II, the U.S. Army used a Sleepy Hollow golf course for the secret storage of munitions. 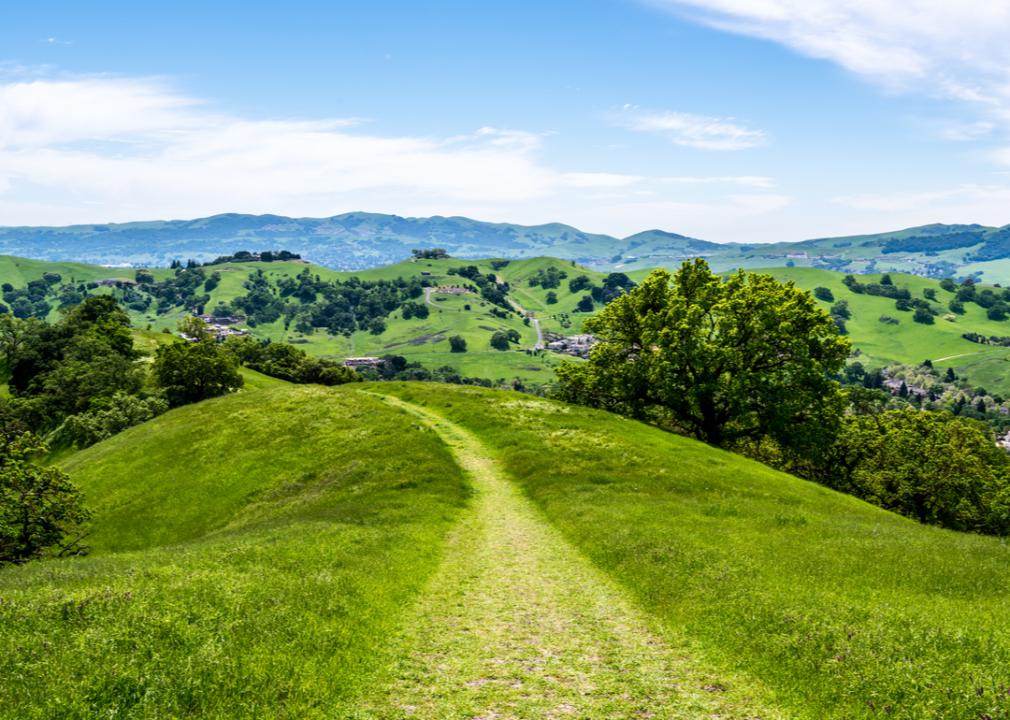 Just south of Mount Diablo, this Contra Costa County town offers easy access to all kinds of outdoor activities. Equestrian centers like Highland Riding Stable and Five Star Equestrian are just a few miles away, as are multiple scenic hikes and even a country club with two 18-hole golf courses. 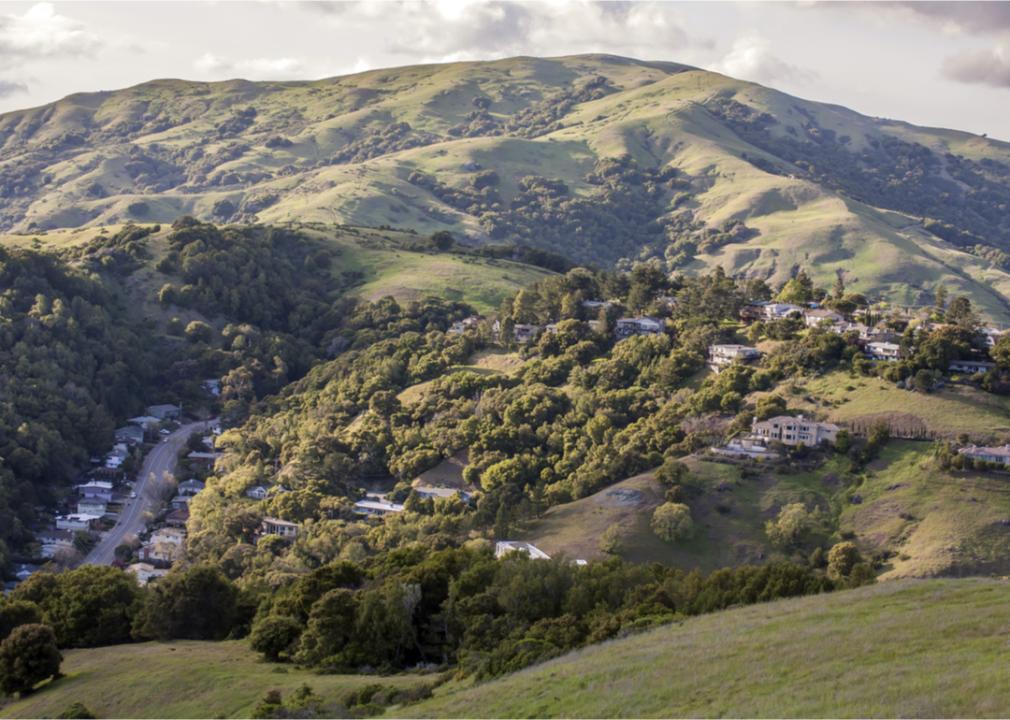 First incorporated in 1908, this quaint town in Marin County is run by a five-person town council as well as a town manager. Ross has a real small town feel, with just two churches, three schools, and a few cultural institutions like the Marin Art and Garden Center as well as a library run by the historical society. 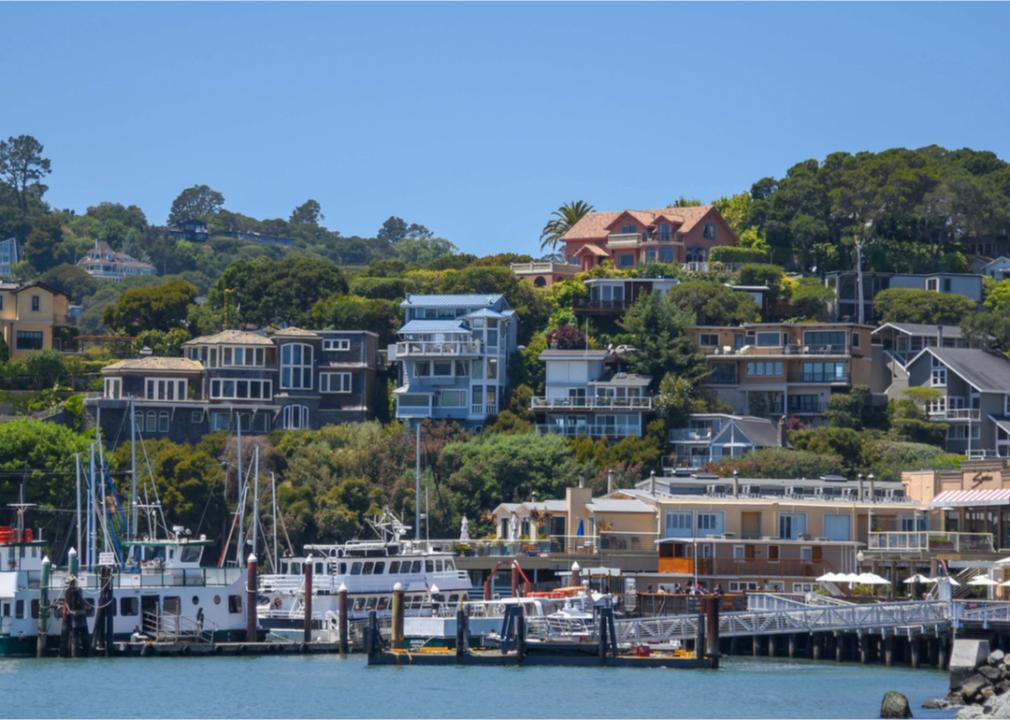 In 1896, 33 residents voted in favor of incorporating Belvedere as a city. The San Francisco Bay borders the town on three sides: It’s technically composed of two islands and a lagoon, giving the homes here unbeatable views. 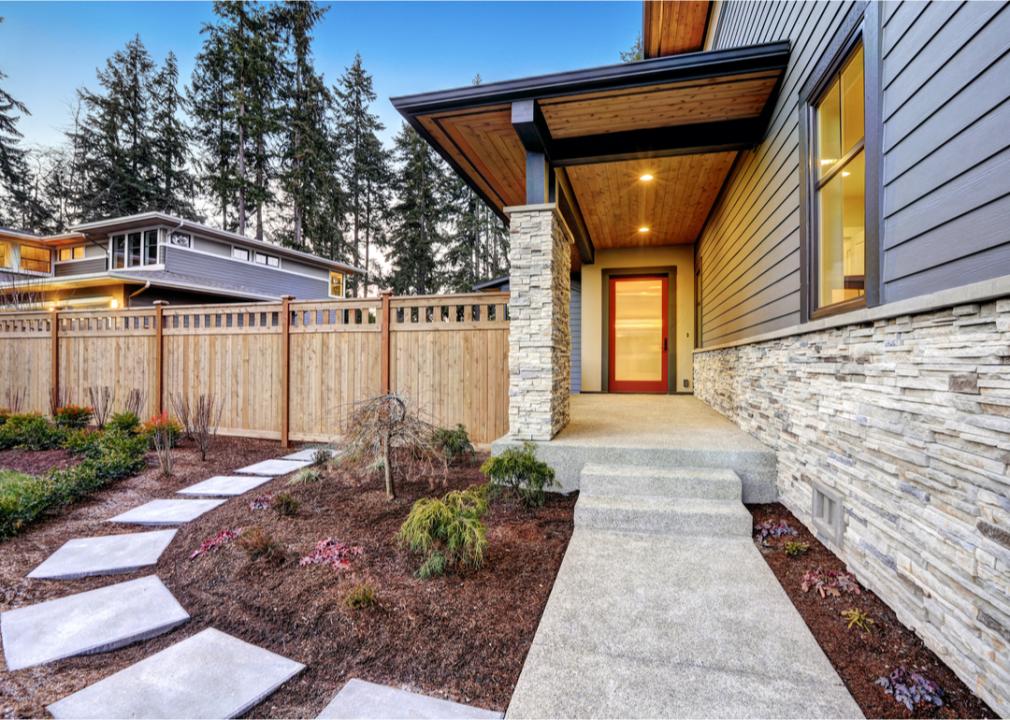 Halfway between the Seattle suburbs of Bellevue and Kirkland, this community on the shore of Lake Washington is an attractive choice for families — as well as a few well-known wealthy residents like Jeff Bezos and Bill Gates. It’s also an expensive place to buy a home: According to Zillow, the median home price in Medina is more than $3.8 million. It’s no surprise that Medina was ranked the eighth richest zip code by Bloomberg. 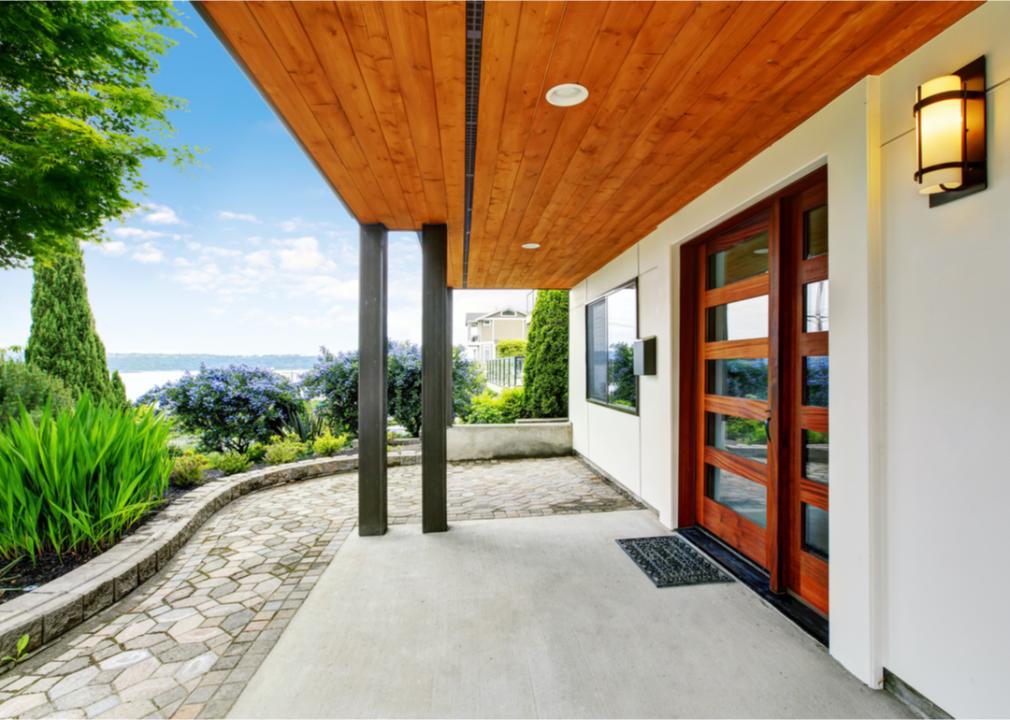 Half an hour north of Seattle, you’ll find Woodway: a self-described “quiet place” where residents love to walk and bike around the evergreen-lined lanes and local parks. The town’s history dates back to 1912, when David Whitcomb Sr. developed 400 acres into modest, country-style homes. 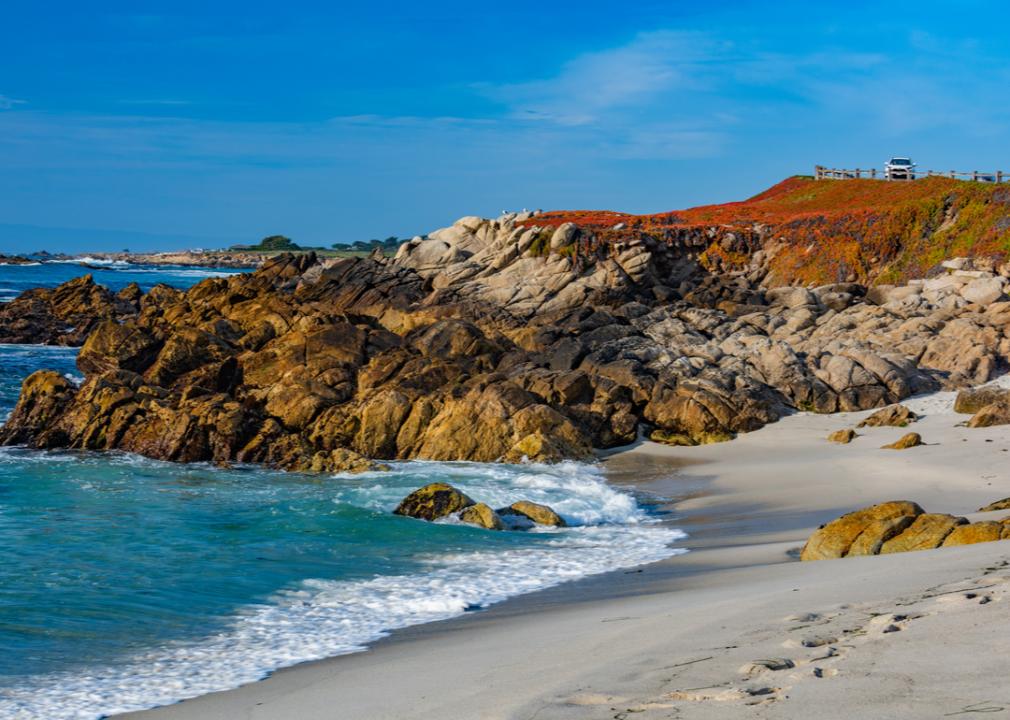 This unincorporated census-designated place in Monterey County is known for its picturesque views. Visitors might want to spend a leisurely afternoon checking out all the sights on 17-Mile Drive, including the Lone Cypress — a rugged, salt air-pruned tree clinging to a craggy rock in the bay — and the iconic Pebble Beach Golf Links course. Though Pebble Beach is technically a separate community, it sits within Del Monte Forest. 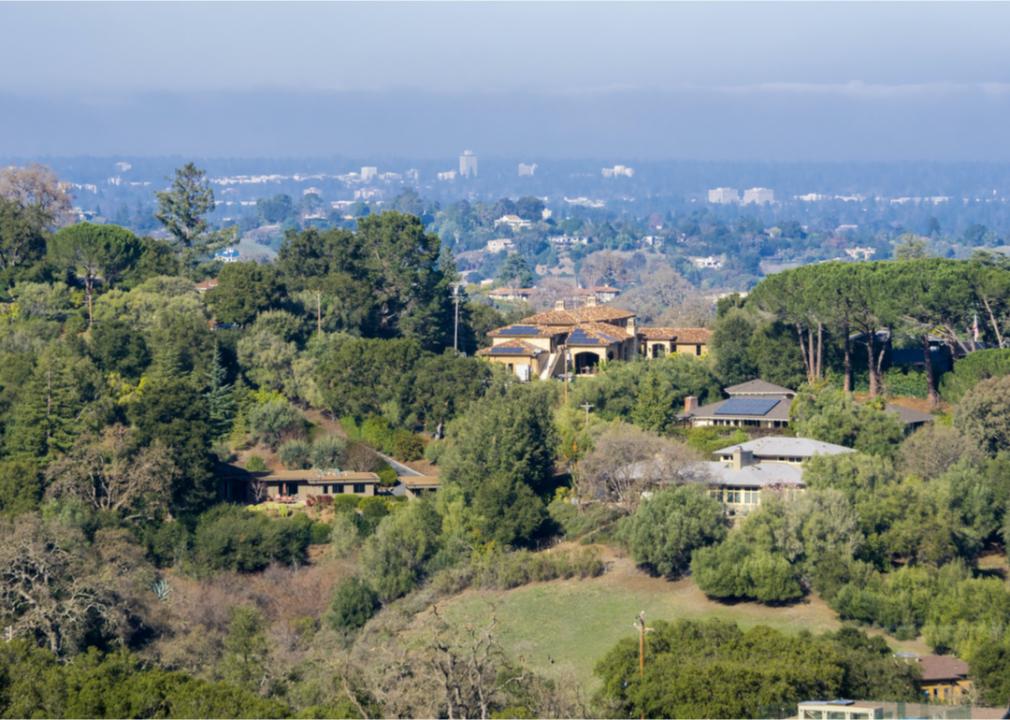 Like the neighboring towns of Mountain View and Los Altos, Loyola is an affluent community. In 2021, the median price buyers paid for Loyola homes was $5.2 million. Top-rated schools, luxury amenities like a country club, and its proximity to the Bay Area make Loyola an appealing — if pricey — place to live. 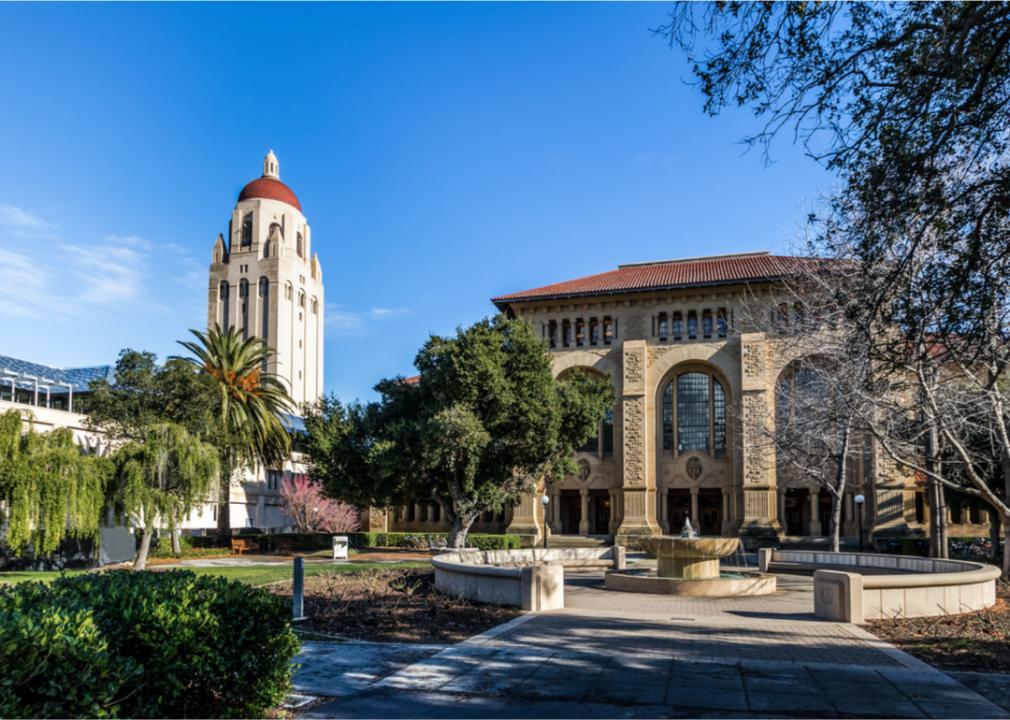 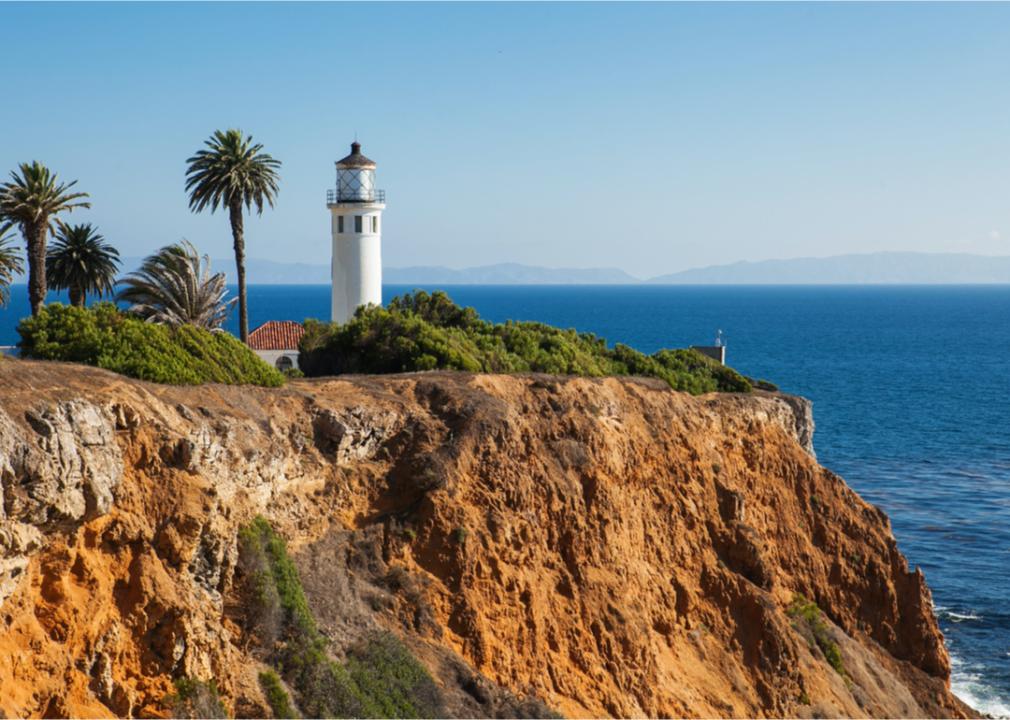 This gated residential community on the Palos Verdes Peninsula covers just three square miles, but each of the 700 properties has at least one acre and is zoned for keeping horses. Nearby attractions include the Palos Verdes Art Center, the hiking and equestrian trails in the Portuguese Bend Reserve, and the architecturally significant Wayfarers Chapel designed by Lloyd Wright, the son of famed architect Frank Lloyd Wright.

You may also like: Best counties for retirees in America 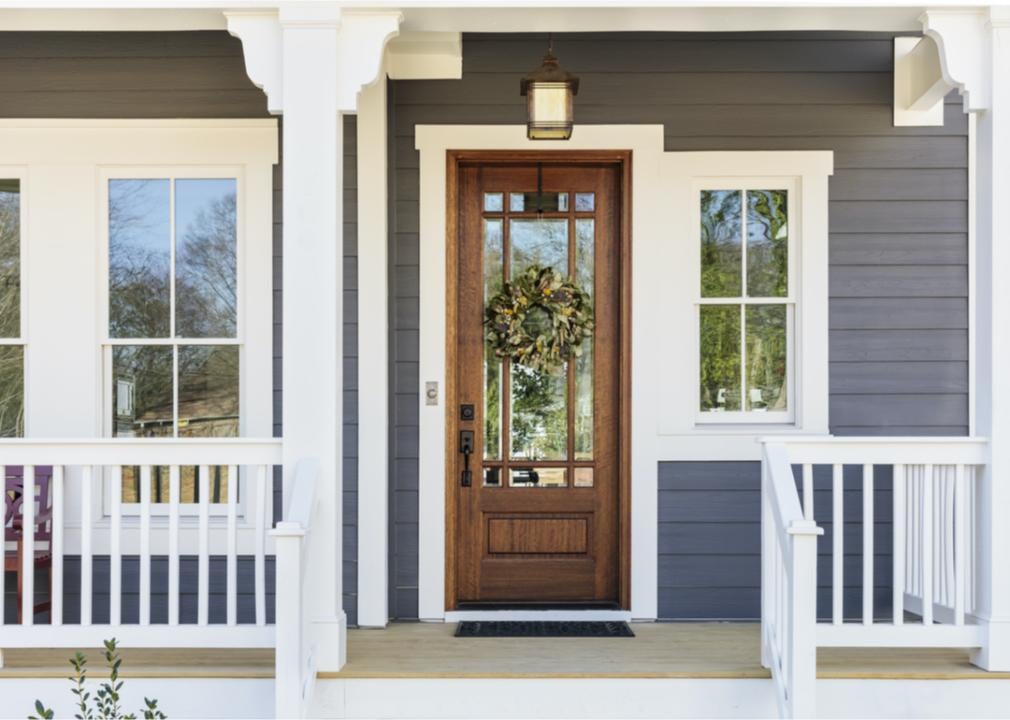 When a community first began to form in what is now Monte Sereno in the early 1900s, the area was rural and agricultural. Today, you won’t find any orchards, farms, or livestock: just a peaceful residential community that has been home to author John Steinbeck, painter Thomas Kinkade, and Beat poet Neal Cassady over the years. 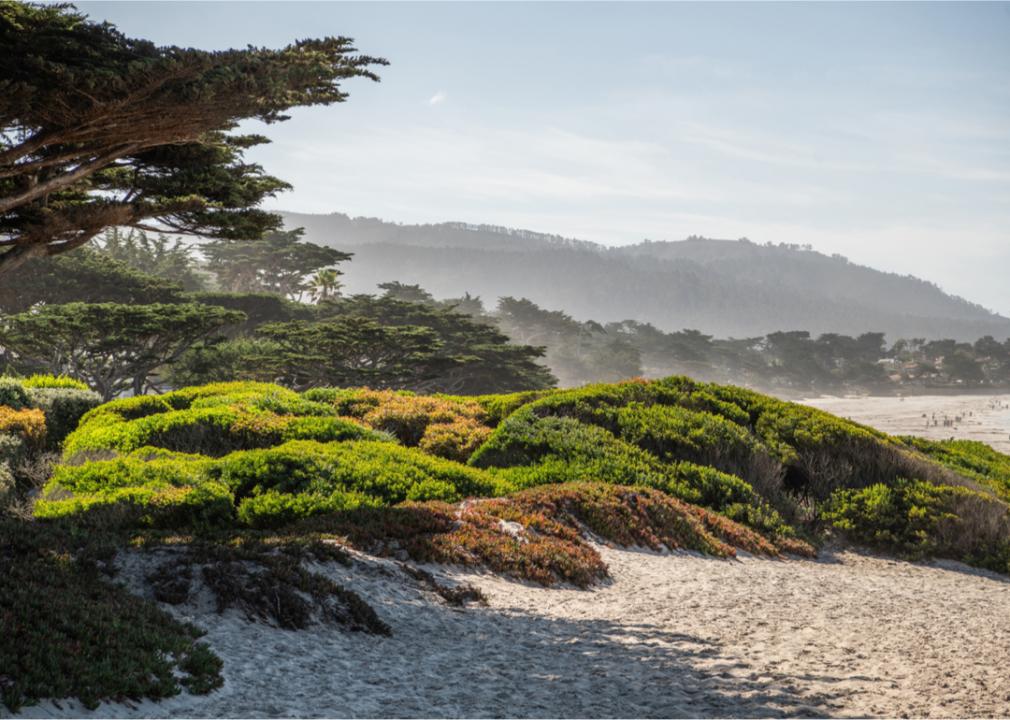 A popular tourist destination in its own right, Carmel-by-the-Sea is renowned for its charming downtown, historic mission, top-notch restaurants, and stunning Carmel Beach. Some of the town’s first residents were artists such as author Jack London and poet Robinson Jeffers, giving the city an intellectual bent and creative spirit. 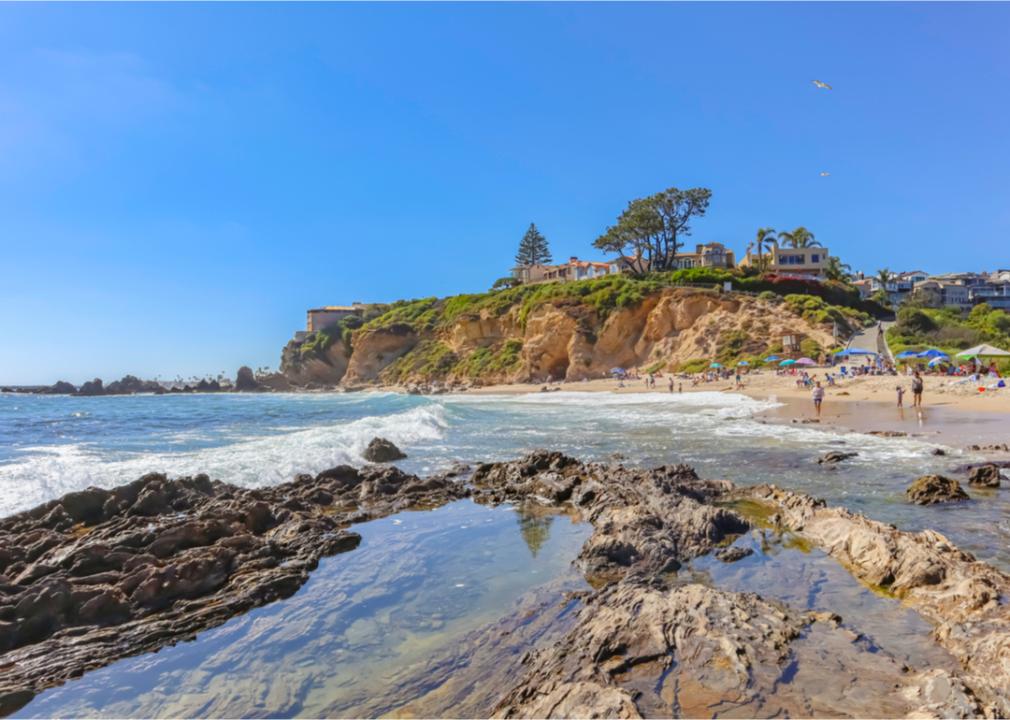 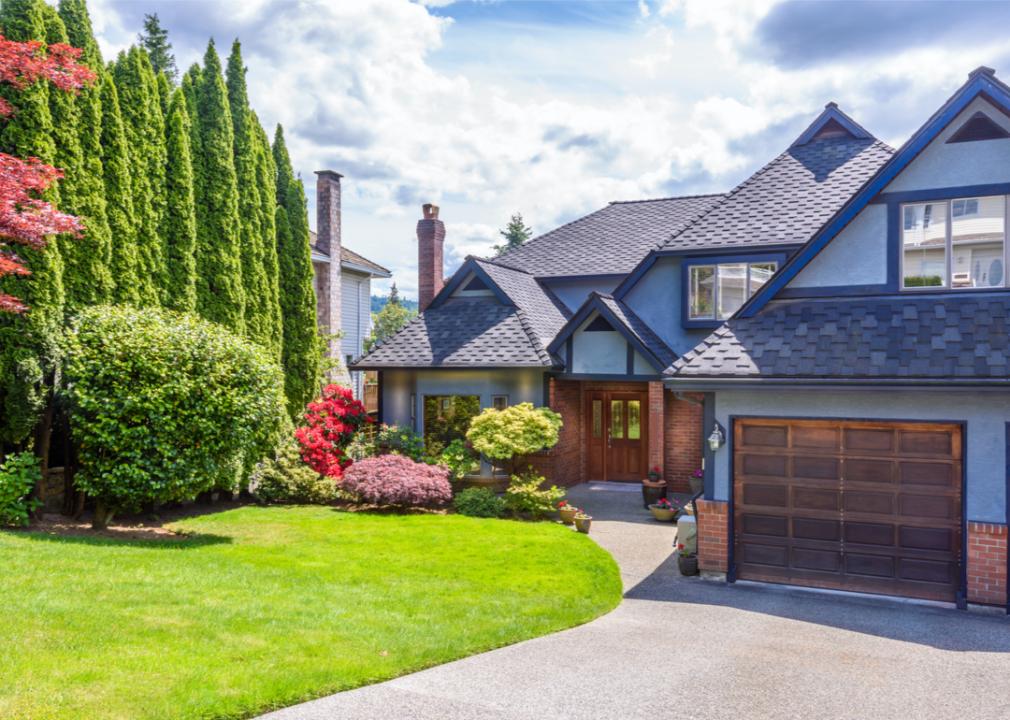 Set on a peninsula in Lake Washington, Yarrow Point borders the number one town on this list, Clyde Hill. Though the first homesteads date back to the 1880s, Yarrow Point wasn’t incorporated until 1959. Nearly one-fourth of the homes here have waterfront views — but even residents who aren’t so lucky can enjoy public parks like the Wetherill Nature Preserve and Road End Beach. 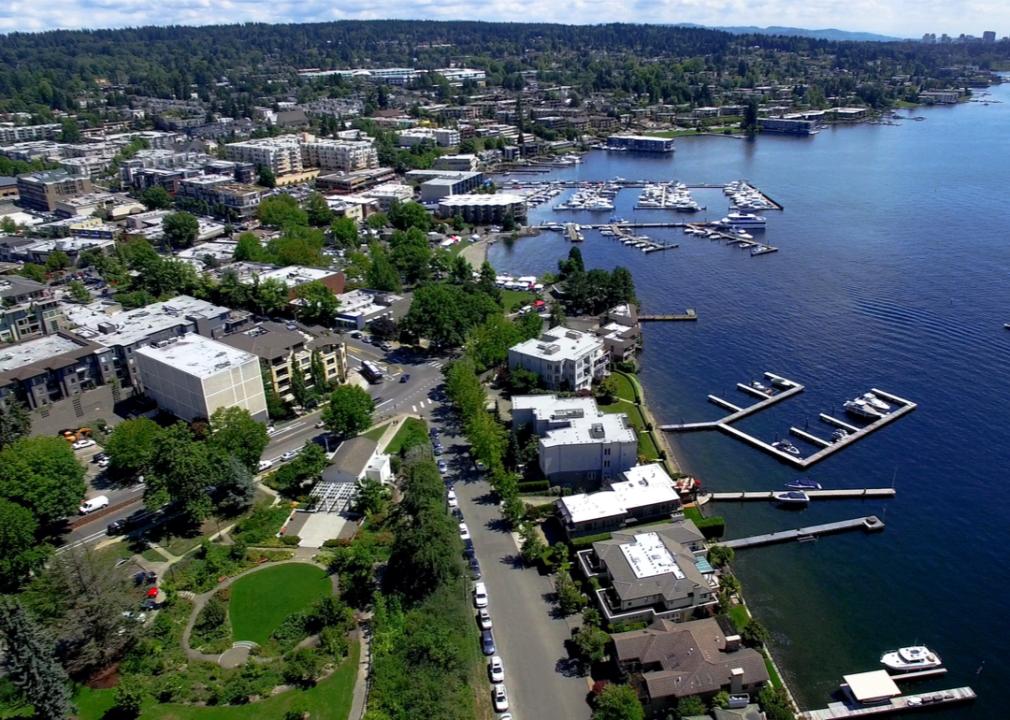 From some of Clyde Hill’s higher elevations, you can spy views of Mount Rainier, the Olympic Mountains, and the Cascade Mountain Range, in addition to Lake Washington and the Seattle Skyline. The area was first settled in 1882 by Irish immigrant Patrick Downey, who farmed strawberries on his claim. Clyde Hill made national news in 1975 when its mayoral race ended in an even tie; the contenders flipped a coin to decide the race.