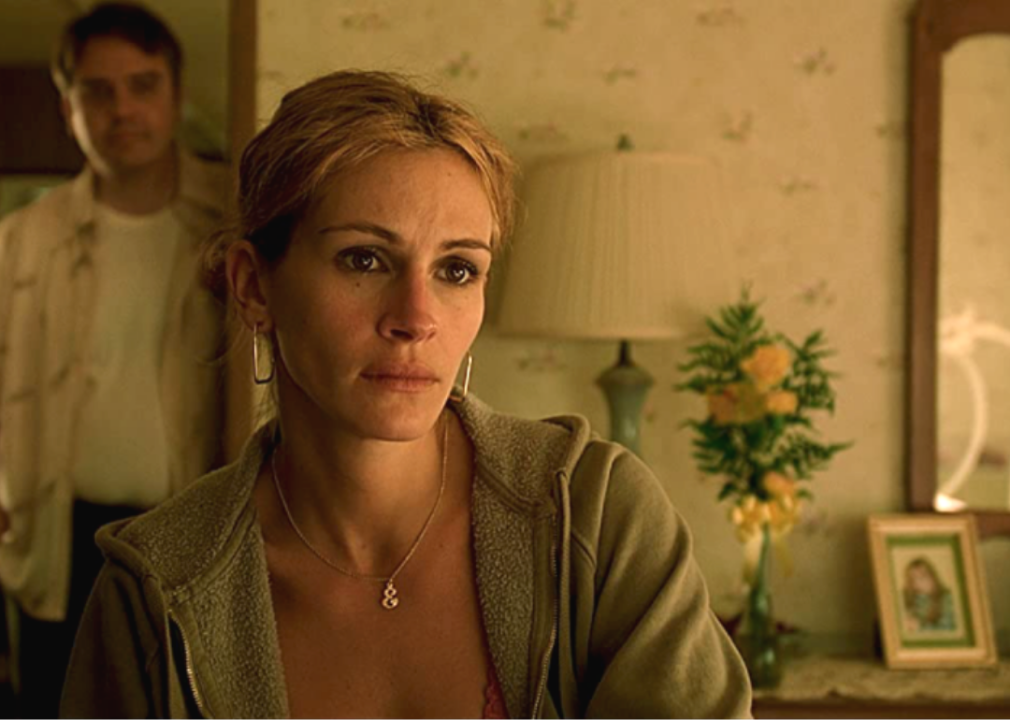 There is a whole category of films that focuses on telling the stories of those who pass through our courtrooms. Think blockbusters like “The Lincoln Lawyer” and “Rules of Engagement,” classics like “To Kill a Mockingbird” and “12 Angry Men,” the tear-jerker, “Philadelphia,” and even laugh-out-loud darling, “Legally Blonde.” Some of these films are entirely fictional, others are sort of based on fact, and then there are those ripped directly from the headlines and copied word-for-word from court transcripts. The latter two categories tend to make for the most absorbing movies.

From courtroom dramas to biopics, you may or may not be surprised to know which legal movies were drawn from real-life inspiration. To that end, The Patel Firm rounded up a list of seven legal movies based on true stories that would make for great weekend watches. Continue reading to find out which ones you’ve already seen and which ones you need to add to your watchlist. 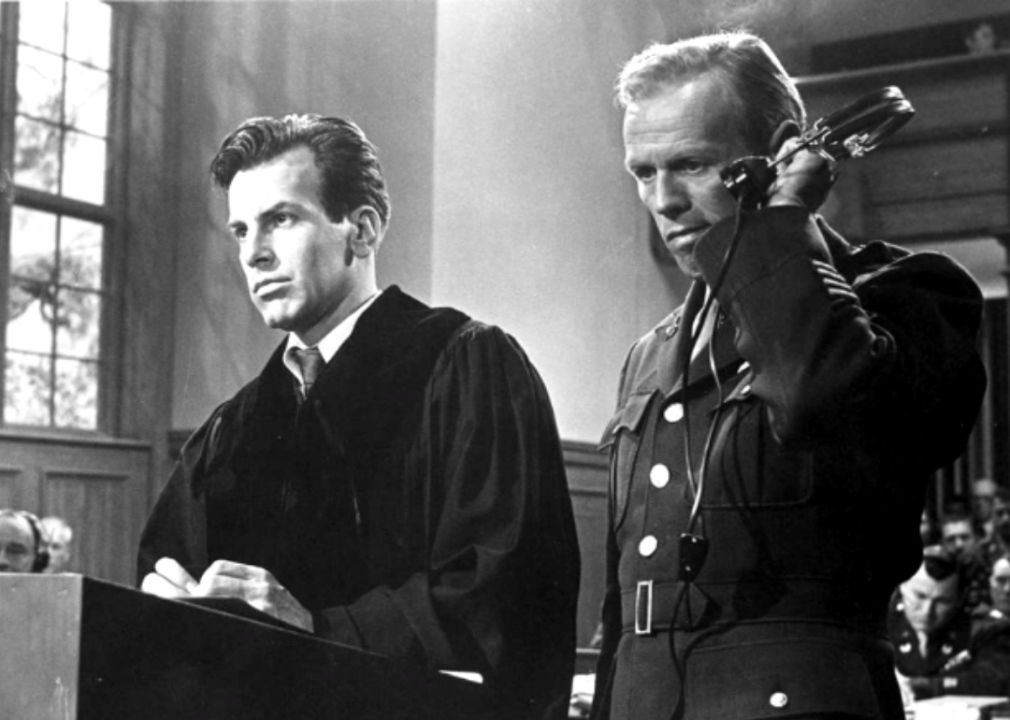 “Judgement at Nuremberg” follows the trial of four German judges charged with crimes against humanity for their adherence to Nazi regime policies. The film features an all-star cast including Spencer Tracy, Burt Lancaster, Judy Garland, Marlene Dietrich, and William Shatner. Not only does the film feature actual footage shot by American and British troops during WWII, but this Stanley Kramer-directed project was also one of the first films post-WWII to explore the ideas of collective guilt and non-combatant war crimes.

The black-and-white courtroom drama was based on the 1947 Justice Trial, which saw 16 German judges and justice officials charged with similar crimes against humanity. In real life, 10 of the defendants were found guilty of judicial murder, persecution, enslavement, and extermination on a large scale. Unlike in the famous film, their fate wasn’t determined by a single retired judge but rather a panel of officials in a military tribunal. 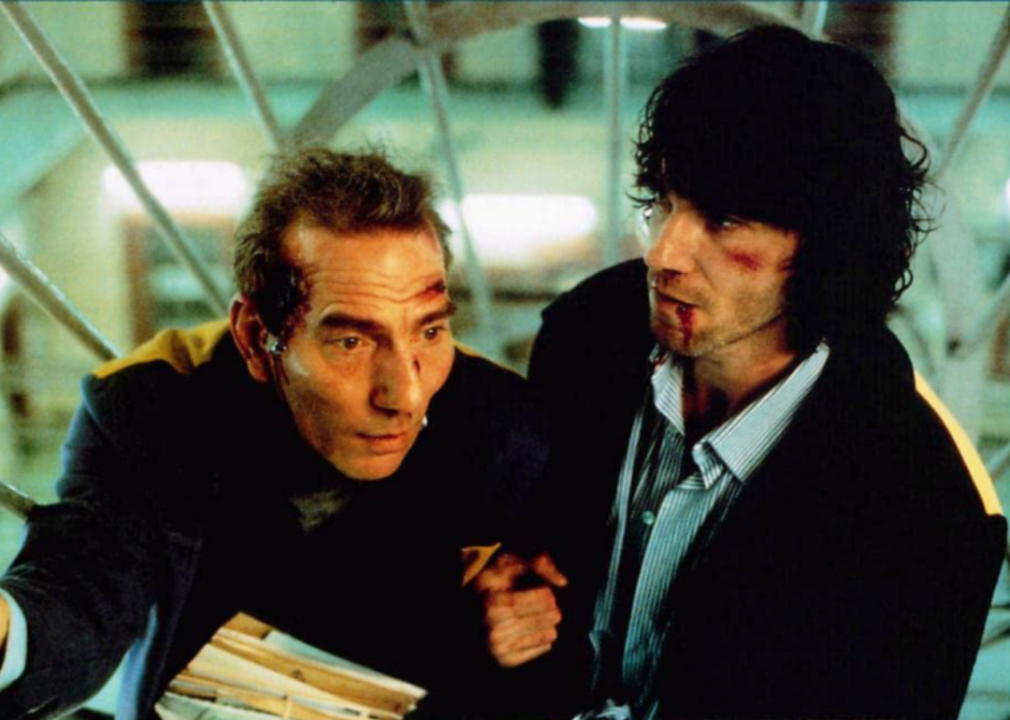 One of the unfortunate realities of our legal system is that justice can be—and often is—miscarried. Such is the case in “In the Name of the Father,” which tells the true story of the Guildford Four, a group of individuals wrongfully convicted of the Guildford, England, pub bombings of 1974. The 1993 movie is based on the autobiography written by one of the wrongfully committed men, and is, for the most part, largely factual.

Upon its release, the movie received some criticism for the way it conflated specifics and fictionalized some details. Even so, it was largely praised by critics and audiences alike for the way it illustrated just how easily things can be mishandled when police and the courts are looking to close a case quickly rather than hold the right person accountable. 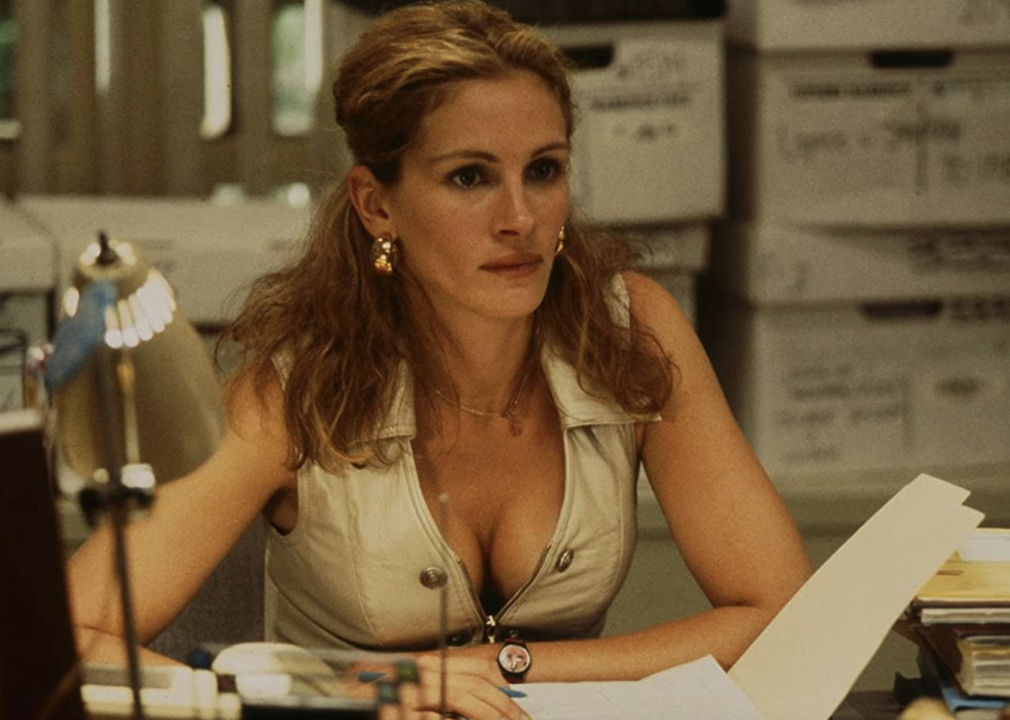 A multi-award winner, “Erin Brockovich” is a biographical drama about a California woman who takes on—and wins—her legal fight against the utility giant Pacific Gas and Electric Company (PG&E). Julia Roberts plays the titular spunky single mother who realizes the water supply in her small town is being poisoned by the corporation and decides to speak up about it. The real-life Erin Brockovich makes a surprise cameo as well.

In real life, the case Brockovich helped build won the residents of Hinkley, California, a $333 million settlement—the largest direct-action lawsuit payout up to that point, according to ABC News. The clean-up effort helmed by PG&E remains ongoing, though nearly all of the residents who lived in the town in the ’90s (when the case was ongoing) have since moved away, turning the once-thriving area into a ghost town. 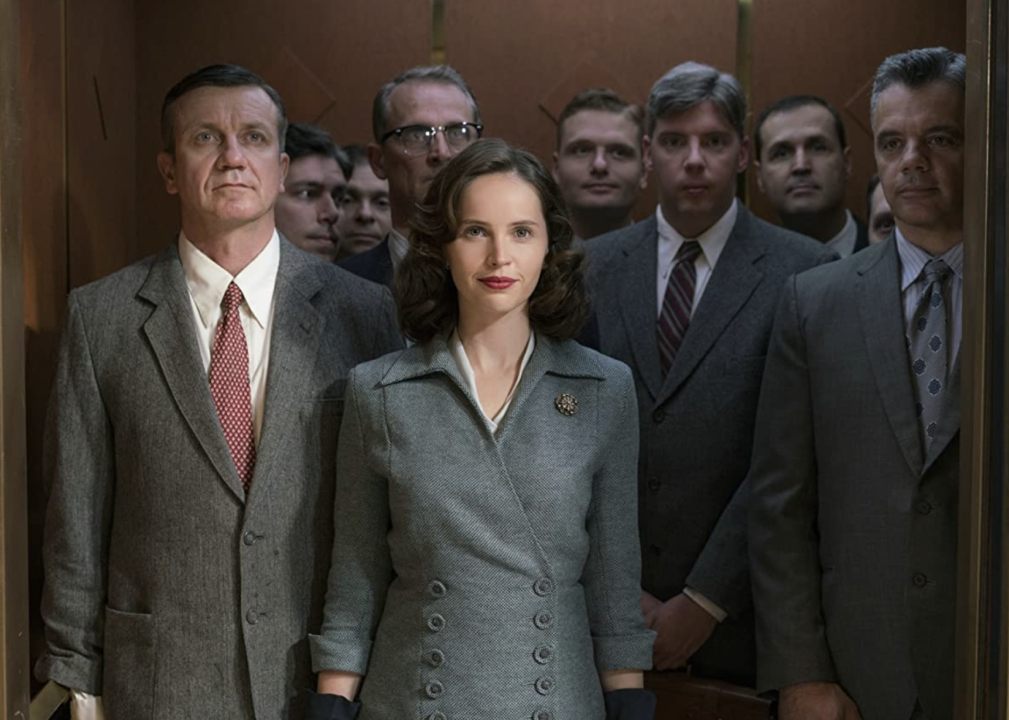 Felicity Jones and Armie Hammer star in “On the Basis of Sex,” a biopic that follows the early life and career of Justice Ruth Bader Ginsburg. The film was written in part by Ginsburg’s real-life nephew, Daniel Stiepleman, and also benefited from the input of the judge herself. That being said, the film didn’t necessarily concern itself with sticking solely to the facts and took several liberties with the truth to make the story more screen-ready.

Despite its occasional loose hold on reality, much of what’s relayed about Ginsburg’s first gender discrimination case (Moritz v. Commissioner) is true, including that she argued it alongside her husband, Martin D. Ginsburg. The movie plays like an origin story, but rather than tease out the backstory of a caped crusader it details the truth behind an actual American legend. 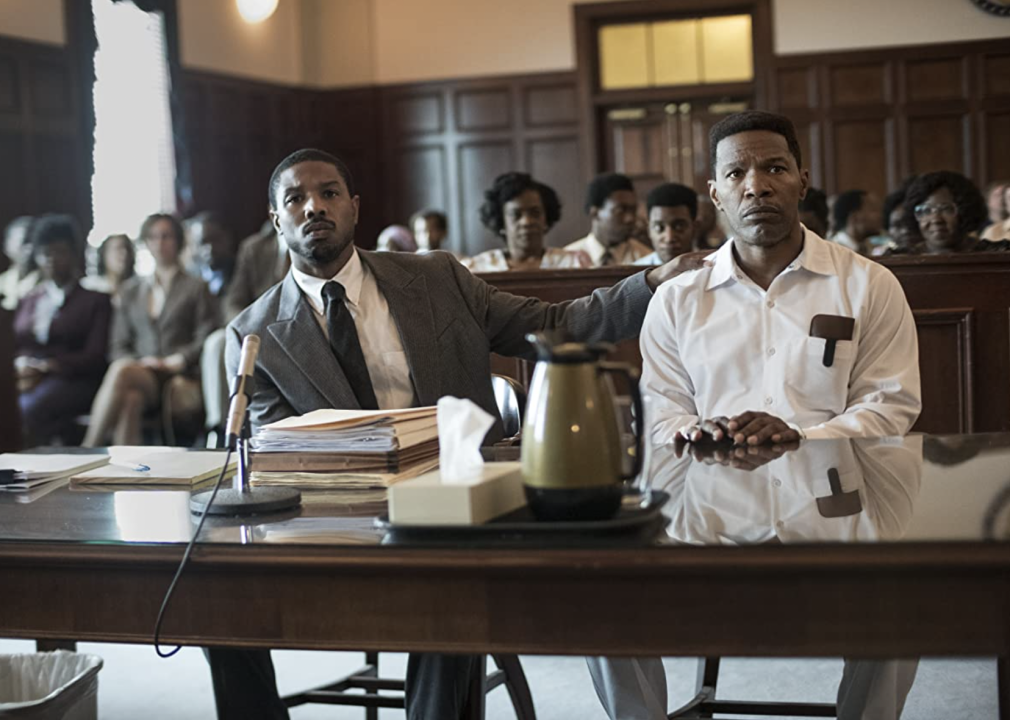 Another film that focuses on the frequent miscarriages of justice and how they’re often tied to a defendant’s race or economic status, “Just Mercy” tells the true story of Bryan Stevenson and the Equal Justice Initiative. At the beginning of the film, Stevenson, a leader in the criminal justice reform movement, relocates to Alabama to take on the case of Walter “Johnny D.” McMillian, a Black man who was wrongly convicted of murdering a white woman. He spends the remainder of the hour and a half run time attempting to clear McMillian’s name and get him out of jail.

Michael B. Jordan and Jamie Foxx’s performances (as Stevenson and McMillian, respectively) were so powerful that they both won NAACP Image Awards. The film itself was also widely praised by critics for its message. Washington Post writer Ann Hornaday, for instance, hailed the film as an “intimate, immediate and deeply moving portrait of the trauma and psychic toll imposed” on those forced to endure racism. “Dark Waters” tells the story of the environmental lawyer who took on the chemical manufacturing giant DuPont. Mark Ruffalo, who produced the film and plays the on-screen depiction of lawyer Robert Bilott, acquired the story’s film rights after reading a New York Times Magazine article that detailed the saga. He then worked closely with the real-life Bilott to ensure the film got the details exactly right.

Just after the movie premiered in 2019, DuPont’s stock dropped by 7 points, and company heads—infuriated by the way they were portrayed—told outlets like Yahoo!, “Its ‘legal folks’ were looking closely at the movie.” These two responses seem to indicate that Ruffalo got more right than DuPont wanted and that Americans will no longer tolerate companies who poison water supplies in the name of a quick profit. 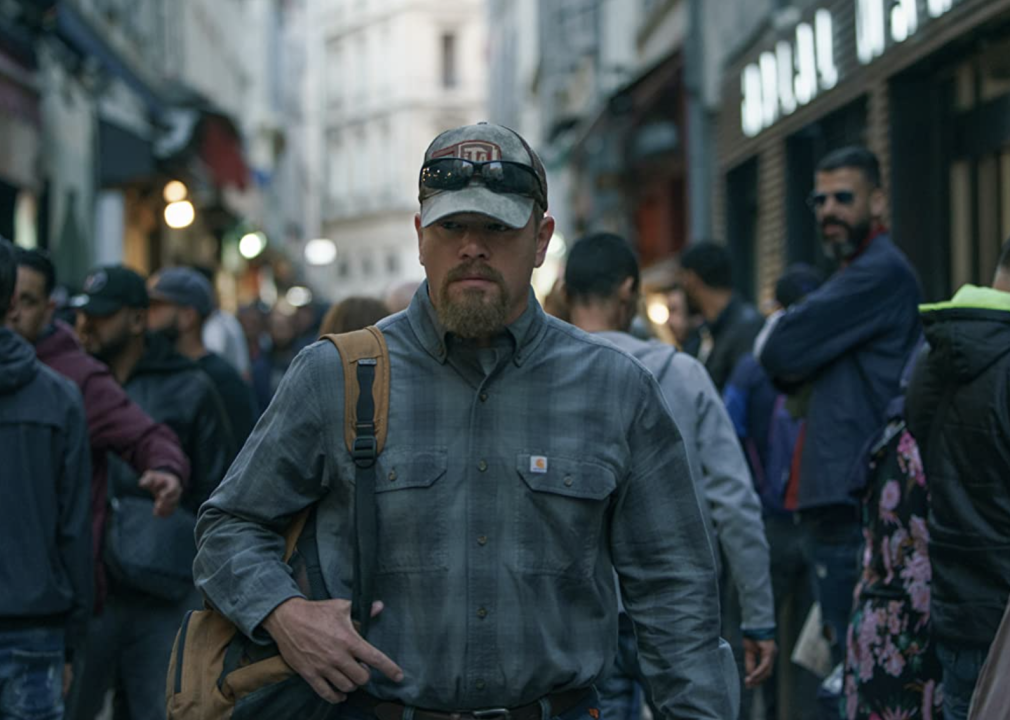 On the surface, “Stillwater” may feel like a run-of-the-mill crime drama or action movie, but it was actually inspired by the murder investigation that surrounded Amanda Knox. In the movie, Matt Damon plays a father from small-town Oklahoma who travels to France to help his daughter (Abigail Breslin), who has been accused of a murder she claims she didn’t commit. In an effort to clear her name, the father often acts outside the law, a decision that becomes all the more questionable in the final moments of the film.

For her part, Knox hates the movie. Primarily because it portrays the character inspired by her as at least indirectly guilty in the murder, which she, understandably, feels damages her image. The director freely admits he took quite a bit of liberty with his source material—even going as far as to dramatize the movie for more excitement—which means this is one legal drama that’s best taken with a grain of salt.