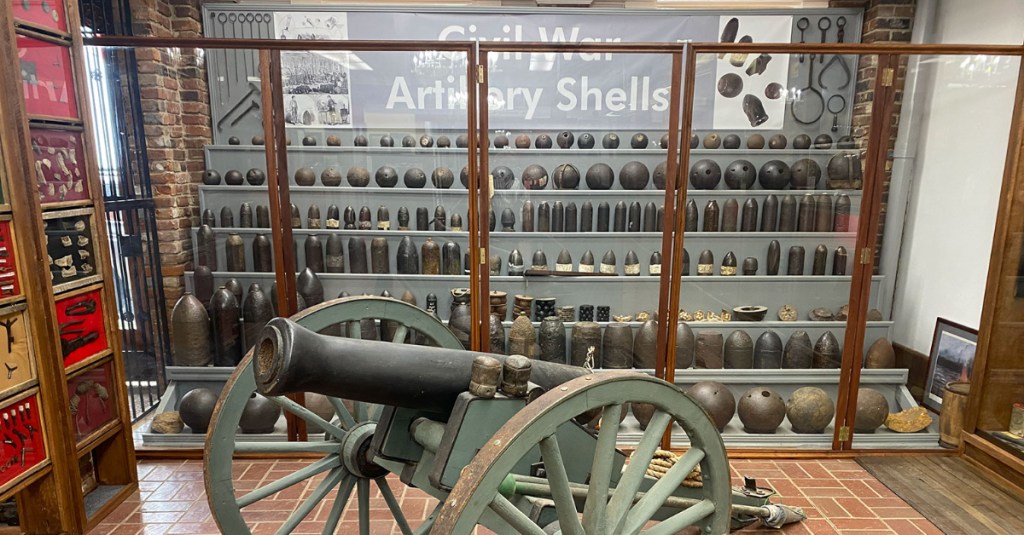 A Vicksburg man’s goal to collect guns from the Civil War period grew into a larger project when he discovered a bill of sale for a 7-year-old girl.

Then, his goal became a quest to give people a comprehensive view of the Civil War era and enslaved people who were the central part of the conflict through his new Vicksburg Civil War Museum.

Charles Pendleton came across a bill of sale, drafted in 1848, that listed a girl named Ella. Her age was described as about 7. She was sold for $350 and guaranteed to be enslaved for life.

“I was blown away,” Pendleton said. “That was just unbelievable.”

The document became a driving force for the idea of a museum. A mission statement hangs from a wall: “Our goal is not to educate you. Our aim is to inspire you to want to become more educated.”

Pendleton said the idea behind the museum isn’t for visitors to dwell on negatives of the past. Instead, he said he wants people to understand the past and recognize how much has changed.

“There’s got to be a way to take this and transform this into, ‘Look how far we’ve come,’ instead of where we were,” Pendleton said. “If we don’t have discussions like this, then museums like mine have failed. It has to be, ‘Wow, we would never go back to that.'”

A significant portion of the museum is dedicated to Civil War era guns.

“Probably about four years ago, I went to a (Civil War) show, and I was fascinated with the different types of guns,” Pendleton said. “My idea was simple. I just wanted to collect one of every gun that was used in the Civil War. Their guns are just totally different than what we have today.”

One wall of the museum is largely lined with glass cases of rifles from the conflict from manufacturers including Sharps, Springfield and plenty of lesser-knowns. Other cases house pistols of the day in every configuration imaginable.

Nearby is a display of various artillery shells and cannonballs, a collection he thinks may be the largest in the state, and aisles are filled with items such as uniforms, period games, cookware and medical equipment.

The look into the mentality of the day starts early. When visitors enter, they’re directed to read various quotes and documents in the first aisles. It begins with declarations of secession from Confederate states.

Mississippi’s sole cause for secession was the preservation of slavery, which is contrary to the belief that the war wasn’t about slavery — something Pendleton said he is often told.

“Our position is thoroughly identified with the institution of slavery — the greatest material interest of the world,” the document states.

Nearby, a display depicts a scene of enslaved people working in a cotton field.

There is also a recreation of a slave cabin. Inside are small bunks with hay for padding, a small table and chairs and a wood-burning stove. Interviews with the formerly enslaved talking about their experiences can be heard while visitors are in the cabin.
One of Pendleton’s favorite acquisitions is an enlistment document for the 52nd United States Colored Infantry and he said many of those listed were likely formerly enslaved or escaped. Because enslaved people were not taught to read or write, their names were written for them, and they signed with an X.

To Pendleton, it represents much more than the names of Black men who fought in the war.

“So, when you see that document, you get mixed emotions,” Pendleton said. “You see both sides of slaves at one time. You see someone who is willing to fight for his independence, but look at how dependent he is. He can’t even write his own name.”
The museum opened in May 2021, and in the nine months since, the names of visitors from throughout the nation and beyond have filled all but one page of the guest book recently.

Keith Pierson of Trinidad, Texas, is among them. He said the museum is unlike other Civil War museums he has visited.

“It’s interesting,” Pierson said as he sat next to a cannon and artillery shell display. “It’s got a lot of stuff you don’t see, like this.

Sue McGuire of New Gladys, Wisconsin, was also visiting the museum that day.

“I think it’s very well done, and he’s (Pendleton) very articulate about the plight of African Americans in history,” she said.
Her husband, Jim McGuire, was with her.

“It’s so well done, and the quotes from people — it’s unbelievable,” he said. “The way it’s assembled, it’s clear, very inviting and easy to understand.”

Nearly 70 years after it closed, Mississippi theater that…