Nearly 70 years after it closed, Mississippi theater that once served Blacks will open for one more night 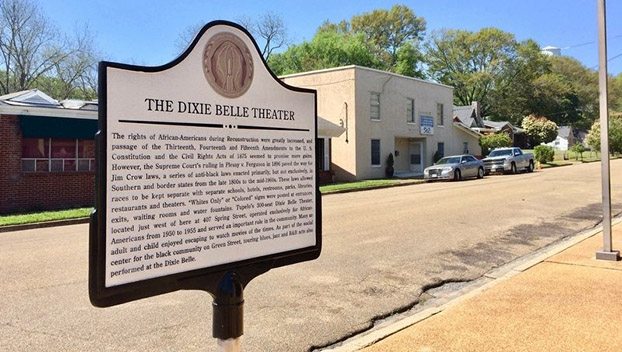 The Church of the Living God in Tupelo will host a Black History Month event inside the former Dixie Belle Theater on Saturday, beginning at 7 p.m. The show will feature dancing, poems, music, and theatrical portrayals of African American heroes. It’s free and open to the public.

Refreshments will be available. Although not required, masks and other pandemic controls will be available for guests.
The building which housed the theater, which during its short life operated exclusively for Black Tupeloans, is the church’s current home.

Derrick Bean, the coordinator and producer of the event, created a program centering on Black history after learning about the theater’s history. His goal is to bring awareness to the former theater and current church.

“I wanted to give back to it and bring light to it and just make people more aware of what that building actually represented and what it still represents today,” Bean said.

The show will feature a poem recitation from Zora Welch of Calhoun City. Inspired by Maya Angelou, it will be a homage “to past, present and future African Americans,” according to a press release about the event.

The Wonderous Worshippers, an ensemble of young people under the leadership of Beverly Daniels, will perform praise dances to a medley of the songs like “God’s Trying To Tell You Something” from the movie “The Color Purple,” LaShun Pace’s “I Know I’ve Been Changed” and “There’s a Leak in the Old Building” and “How I Got Over,” by Vicki Winans.

There will be a separate Wonderous Worshippers’ performance from a male trio to Deitrick Haddon’s “Heaven Knows.”

As part of the program, local residents will present theatrical portrayals of historic African Americans such as Jackie Robinson, Medgar Evers, Fannie Lou Hamer and others, and world-renowned blues musician Terry “Harmonica” Bean is scheduled to make his first appearance at the Dixie Belle Theater.

Built during the Jim Crow era, the Dixie Belle Theater was one of the few buildings inside the city of Tupelo available exclusively for African Americans. From 1950 to 1955, attendees could watch movies and performances of Green Street, touring blues, jazz and R&B acts inside the 300-seat theater.

People attended an integrated theater after the Dixie Belle closed, but the building remains.

These days, the theater hosts 35 to 40 worshippers during the Church of the Living God’s Sunday services, said Pastor Theodore Roach. It is also home to the Sacred Steel players and the Pentecostal church where Elvis Presley learned some of his musical stylings, the event’s press release said.

Roach, pastor for nearly three decades, hopes people are able to reflect on the theater’s past and its ties to the Black community as they pass through the doors on the night of the program.

“It’s a piece of history that we should preserve and honor and celebrate, because it’s not just a theater,” Bean said. “It was a place where African Americans could come and just feel safe in a community that was not for them.”