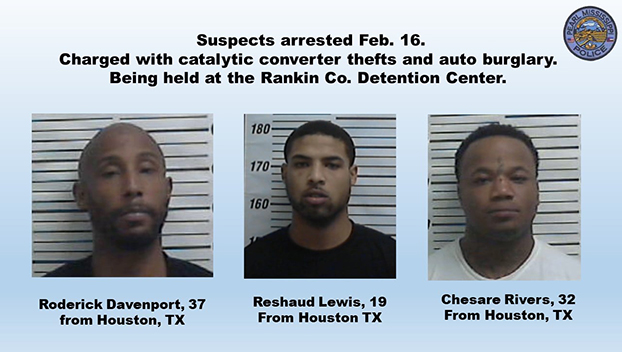 The Pearl Police Department has arrested three suspects they believe to be a “crew of catalytic converter thieves.”

Roderick Davenport, 37, Reshaud Lewis, 19, and Chesare Rivers, 32, have been arrested in connection to several vehicle burglaries.

Pearl Police say they have located the suspects’ vehicle during their investigation on the afternoon of Feb. 16.

Detectives were able to link the suspects to several thefts of catalytic converters and stolen items in the Pearl area.

Search warrants were executed and several converters were recovered, along with several burglary-type tools. Also recovered was a handgun that had been reported stolen from a victim’s vehicle.

All three suspects are from Houston, Texas, and have an extensive criminal history that includes burglaries, sale and use of illegal drugs, theft, and possession of a firearm by a convicted felon.

All three suspects are at the Rankin County Detention Center.