‘HOUSTON, WE HAVE A PROBLEM’ Mississippi truck driver narrowly escapes fire after seat belt locks up 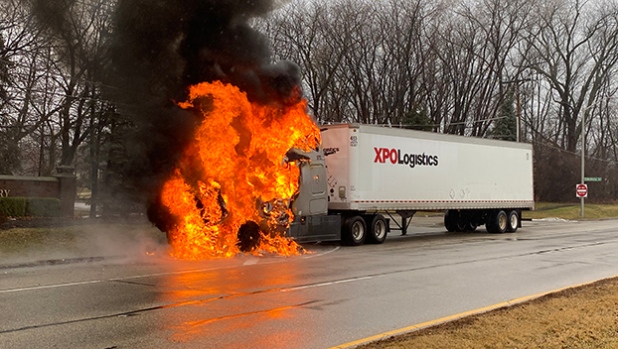 A Mississippi truck driver says he narrowly escaped a truck fire with his life this week.

Natchez author and historian Jeremy Houston said he was driving an 18-wheeler for a company he works for in Libertyville, Illinois, on Tuesday when he started to smell smoke.

Within minutes, black smoke started to come into the front cab of the truck, he said.

“It was coming from under the seat and that was when started to pull over and my seatbelt locked up on me. Before I knew it, my jacket had flames on it. I thought I was going to die.”

Houston said he somehow managed to punch the seatbelt and got free. He stripped off his jacket and escaped the cab of the truck as quickly as he could before it was suddenly engulfed in flames.

He escaped with a herniated disk in his back and a sprained toe he got from jumping out of the truck. He only had time to grab his cellphone and lost the rest of his belongings, including his wallet, a few copies of a book he wrote, “Straight Outta Natchez: A History of Black Natchez,” and a poster that his wife helped create for the recent “Isabella and The Prince” presentation at the Natchez Museum of African American History and Culture.

“All of that can be replaced,” he said. “I’m just thankful to be alive. I jumped out as fast as I could and ran for my life.”

“I have never been so happy to see the police in my life,” he said.

Houston said the fire had been caused by a mechanical issue with the truck and warned other heavy equipment operators and mechanics not to “cut corners” when it comes to maintaining their equipment. Houston said he is thankful to come home to his son, daughter and wife.

“Everybody was talking about Tuesday being a special ‘two’s day’ because it was 2-22-2022. I’ll never forget it because I could have died that day.”